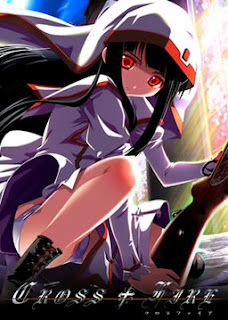 Foreword: Cross Fire just hit my comfort zone completely.I prefer profound but few heroine characters. And there are only 5 characters in the game plus the protagonist. A chatty friend classmate, a teacher and three heroines and that's it.I prefer kinetic novels and this one has a forced playing order with just a handful of choices.I like a good story and detest chara-ge. Story here is great - at first it's just Rena who stands out and sets to protect protagonist against the nightmarish monsters. But as the story unfolds mechanized units of mysterious organizations come into scene and main characters reveal inner abilities to fight the aggressors. What's really cool is that there are no school scenes apart of transferred student introduction and frequent lunches on the grass.I really prefer all-age games and this one quite few eroge scenes and only by the end. Those scenes can be easily omitted since they do not become turning points and the story unfolds as usual.How could I rate such a comfortable game low? It turned out I could! And here is why...

Summary: Kai lives a peaceful life at St. Lilium High School. But his life starts to collapse after a girl, Rena, transfers to his school. Murder cases, ugly rumors and hostile eyes.... Rena, who's got red eyes, says to Kai, "I'll save you. It's my mission." And the situation starts to involve people around Kai.... 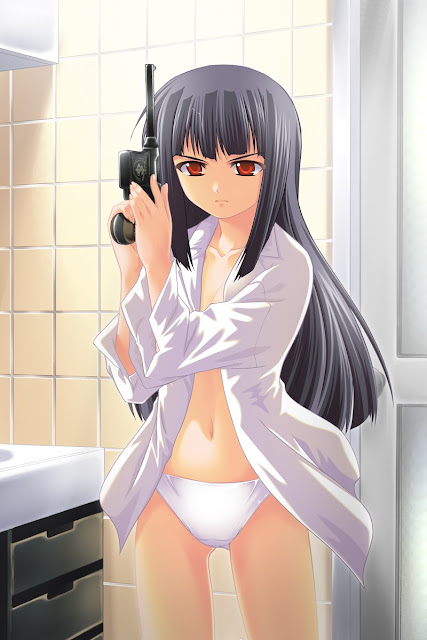 Rating Comments: First common part of the game was great. Red flashbacks, nightmarish shadows, first encounters. As usual, the problems started with individual routes. First of all, routes were very much alike and follow the pattern : you choose to visit girl's place -> you get to remember that you've known this girl since childhood but forgot about that later -> girl SOMEHOW starts to use weapons to protect Kai -> final battle of girl and her friend. Mindblowing as it may look, that's how it is. Secondly, battles are very long and usually have one static CG of each character with weapon drawn... the whole point of action gets lost completely. Only last third route starts to make sense, but too late, after 10 hours of drowsy sleepiness. 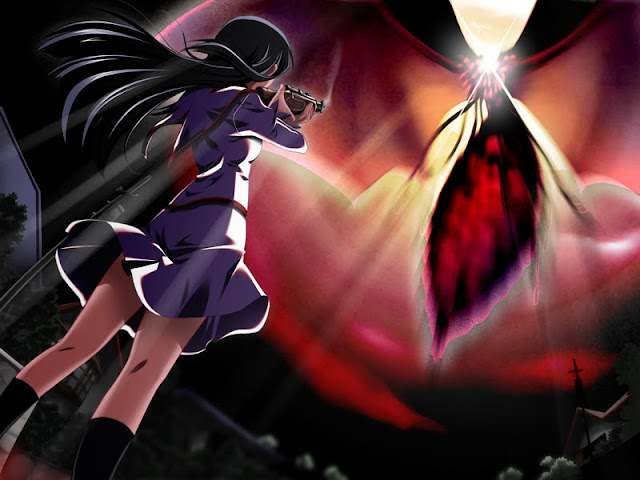 Battles with monsters were always fun. Monsters murmur funny words all the time. And battles end fast unlike inter-human ones.

Structure: Setting is great. Church motives and music intertwine with nightmare monsters and mechanized troops. The capes that heroines are wearing are awesome. If such plot had taken less time and bothered to present more meaningful and active battles, the game would have a chance to be special.

Story: There's little story in here, actually. Monsters attack. Rena gets wounded in one of the fights and so characters have to find inner reserves to protect themselves. Everything else is a spoiler. 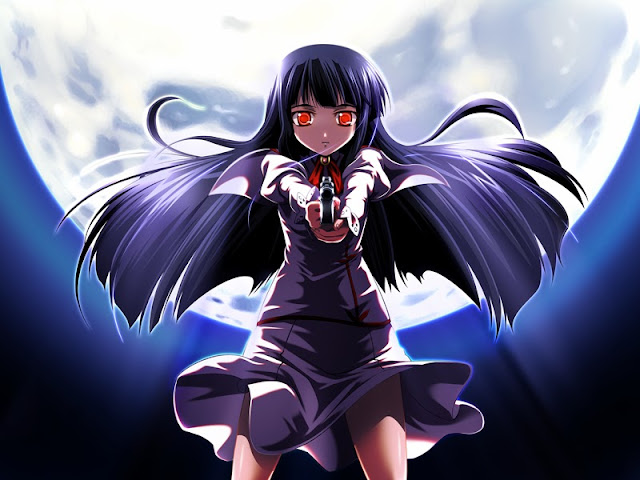 Ok, I like the moon. And red eyes on the moon background especially.

Kamui Rena is the glue of the story and of course the best character. Intelligent, quiet, always proactive and protective. With mystery behind red eyes. Just perfect. If only it was the game only about Rena. 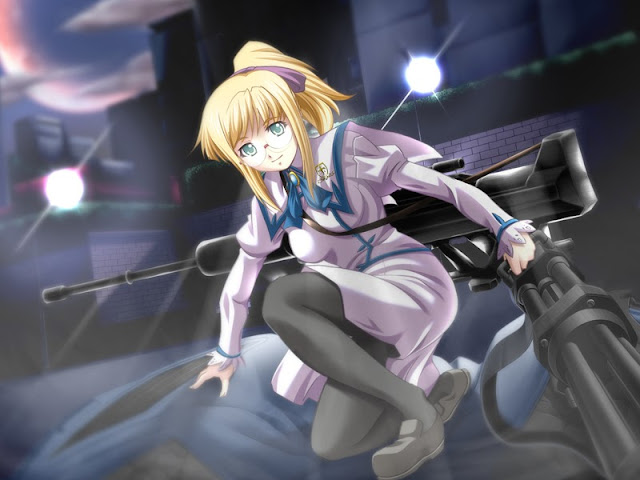 She also has a dual-blade and pretty much every her weapon higher than the owner.

Angela Orsini is weird. 90% of the time her sprite stays at frightened pose. And she uses "nano desu" at EVERY freaking sentence. So she had to play the role of kawaii character and such characters fail to contain much depth. If you like the type, you'll probably like her route. I skipped a great part of it. 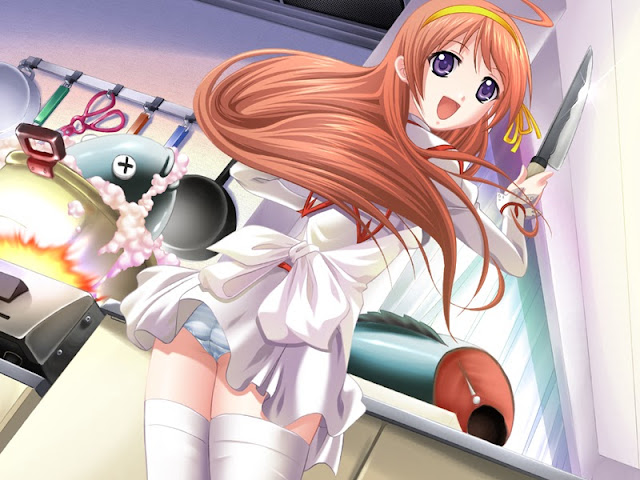 I've seen such CG somewhere... Right, in every 2nd game

Harima Kaoru is a normal cheerful osananjimi. She talks loudly and a lot so she has a role to speak up all the banal stuff. What especially struck me is that she has just one ok'ish CG while others surprisingly ugly. That's weird since Kaoru route is kind of true route. Uses katana in battle. But in her own route she turns into a sleazy bitch. I can't stand such mentally unstable characters with sudden changes of mood, constant bursts into tears and pretences. Well, for the same reason I can't stand Ogiso Setsuna from White Album 2 and Hinosaka Mitoki from DameKoi who are universally loved by the public

Protagonist: Well, it's not the strongest trait of the game. He's faceless, he's the only one in the game who can't fight and he's not good at anything. All three heroines pursue his attention from the start so no need to undertake any efforts. He happens to have close ties with each of girls from the childhood, but of course he's no recollection of it since he has AMNESIA without even reason for it. He's the usual jelly. BUT HE IS KIND TO GIRLS! Oh, right - as in 99% of other VNs.

Sexual Content: Low. And what I especially liked was that relations between characters do not change afterwards. Story goes on as if nothing ever happened so noting missed on skipping.

Affection for the Characters: Moderate

CG Score: 10/10.
CG are from splendid to breathtaking. All the bad CG reserved for Kaoru. Really, art is second to none to my taste and this game was worth it just for the sake of CG. What lacked in here was that CG are of quite low resolution and quite often one part of CG was enlarged to underline some feature talked about and those lookups were horrible since all the pixels ran wild crying to read faster to get a change of screen. 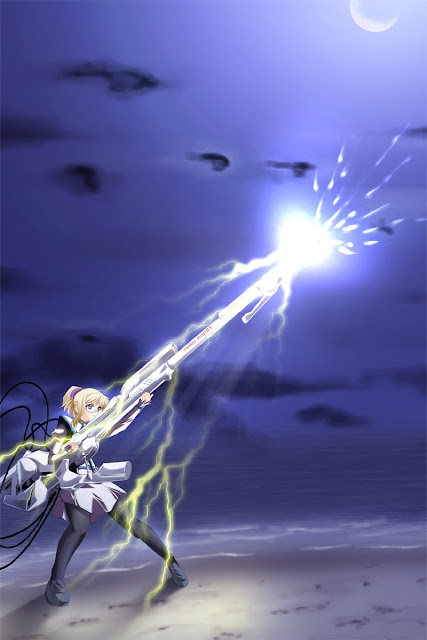 I can literally see this jolt flying off

H-scenes: Well, there is censorship. Scenes varied greatly and I liked the use of clothes in there. Boring nakedness only encountered in couple scenes.

Sound Score: 8/10. I liked the music. But the number of compositions seemed few to me. There is like exactly the same one composition for each anxiety scene, one for battle and so on. At some point I had to turn music really low.

What I loved greatly about the game is the love for details and guns. It's not just the gun that Rena shoots - it's Mauser C96. It's not just some grenade that's being thrown - it's M24 type. 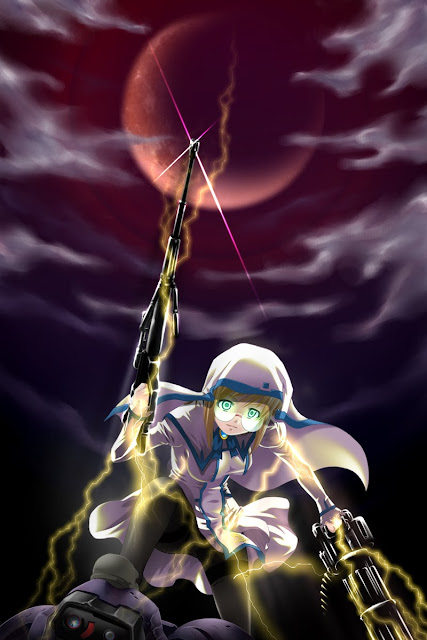 All you need is guns.

Conclusion: Game is almost forgotten and that's no good. Beautiful CG, great setting and pleasant heroines make the game warm and cosy. First part of the game is great and then things get repetitive. At 10th monster encounter you kind of stop following the battle flow and just can't wait for it to end. 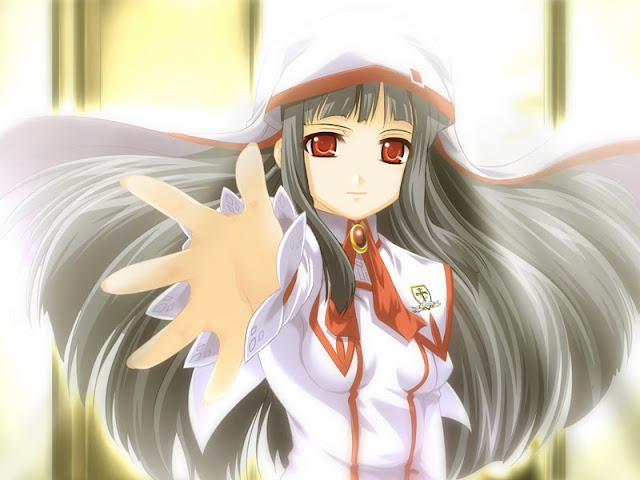