Foreword: It would be weird if I reviewed only three games of the serious out of four. So here is the leftover piece - and again a worthy one. 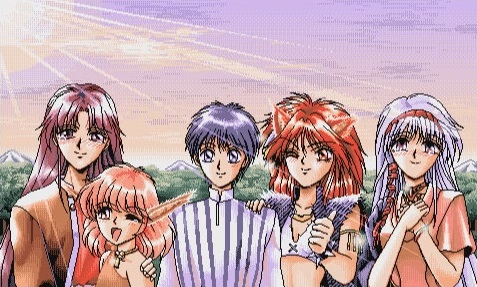 Synopsis: A biological experiment that began in 1993 led to a terrible disaster in the beginning of 21st century. A virus that turned living beings into mutants and monsters has been unleashed. Soon the Earth turned into a terrifying place of chaos, as more and more human beings became infected. Unspeakable violence obliterated human civilization. Within a few years, humanity was on the verge of total annihilation. The Era of Darkness began.
But not all hope was lost. Humans began building cities known as "Domes", isolated from the wilderness, protected by glass from all sides, cut from natural resources. It was possible to start building civilization anew.
On one fateful day, the famous scientist couple Mizuhara were killed in what looked like an accident. Their project, which showed new ways of fighting the virus, descended into the grave with them. Their two children were separated and for a long time were unaware of their origins. But the wheels of destiny keep spinning, as the young Mizuhara is about to discover the truth about his parents, and perhaps bring new hope to humanity... 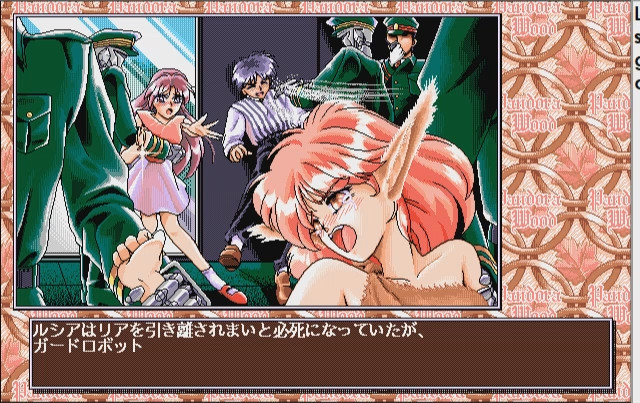 Rating comments: Huh, the worst rating of all games in the series. The biggest complaint this time is absolutely spineless and useless protagonist. We see his crying face so many times that the desire to hit him arises. Luckily, his female cousin Lucia hits him so many times during the game that even desire to hit him vanishes. Another my complaint is that the game gets very ero-centered by the end of it sacrificing some of the story for the sake of it. I'm glad it was fixed in later installations, but here it left a negative impact for me. And that brings forth my complaint about the story which I'll explain in the story description. Overall game quality stays on the same level as other games of the series which is very high. 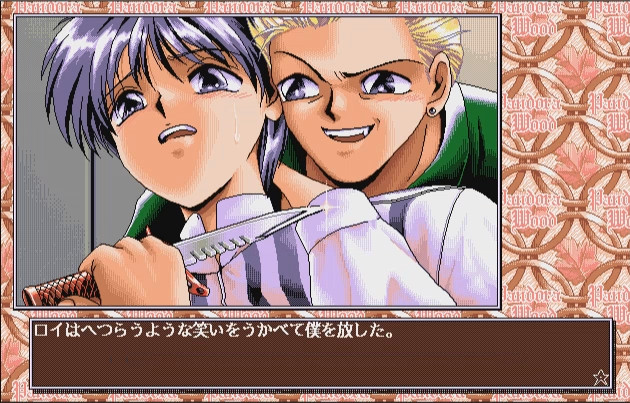 Protagonist: Jackie makes the worst protagonist in the series and I'm very glad I did not change his name to mine (there is such menu option). He can't make his own decisions, complains and cries all the time. His female cousin Lucia who accompanies him for the most of the game is a typical tsundere - basically it's a less funny version of Rabby from Gao Gao 3rd. When by the end of the game she's asked why she's that much of a tsundere, she answers that she does not really understand herself often and does not know what she wants... jeez. Jackie can't make his own decisions, so Lucia does them all the time! And she chooses kind of the worst options, so they always get into trouble. And both protagonists are powerless, so they are abused for the whole first part of the game and it does not look funny, to be honest. But to compliment the developers there are nice sub-characters here and amplified humor part. 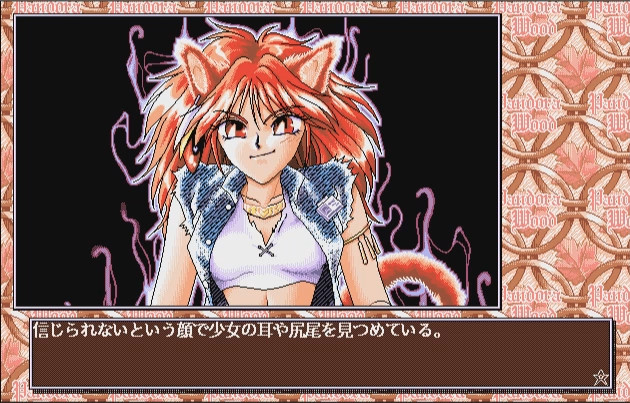 Characters: As usual, there are lots of sub-characters. The funniest one is Laila who is the genetic parent of Ilia from Gao Gao 3rd which means that they have totally the same personalities, but different memories. Another curious character is glasses wearing Meg who is a friend of protagonist Lucia. The beast girl protagonists encounter first is Lia, but she does not say anything but "Mi" and thus is almost useless for the story. And there's also a half-mermaid girl Nagi. Phew, that finishes the harem of Jackie. As if it's not enough - there also other sub-characters with H-events. 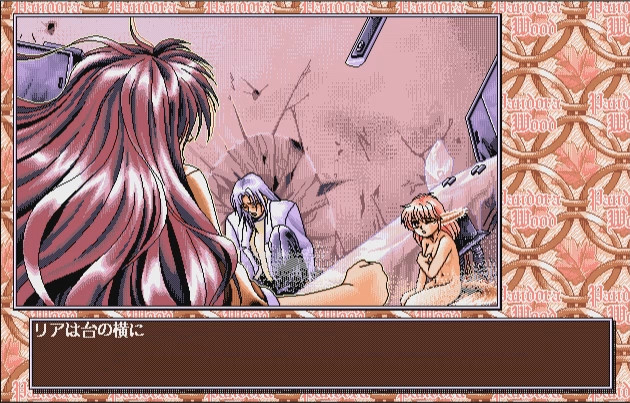 Story: Jackie was separated from his female cousin Lucia 10 years ago after death of their parents. Now Jackie goes from Pluto-city to Aristo-city to meet his cousin. She meets him at the station, but treats him as a dog which role Jackie joyfully accepts. She is foolish enough to fall for a nanpa and Jackie whines so much that he's taken along on a car ride. The nanpa guy Roy brings them to a forbidden area infected by virus and attempts a rape. The cousins flee from the car and get lost in the forest where they eventually meet mutants and the real story begins. But forest part of the game does not really last long and 6 chapters out of 8 take place at Aristo-city upon their return. In order not to spoil much I'll only say that their return does not really happen smoothly and that the laboratory under the city holds all of its secrets (same as in Gao Gao 3rd and 4th, actually - so it's hardly a spoiler). I actually hoped for a better story - not just a walk to the forest and return back with the remaining story happening in the same city. But Gao Gao series is characterized by some facilities investigations in a company and that's presented here in full volume. Moreover, first two chapters were too boring thanks to featuring only two failure protagonists. But as more characters come to stage the flow gets its usual pace and the game becomes a worthy species of the series.

CG: As usual, all the full-screen pictures are reserved for HCG which are rather uneven. But half-screen CG are very nice, yet as usual reserved only for event scenes.

Sound: Great! But I actually think that Gao Gao 3rd inherited too many melodies from this game. 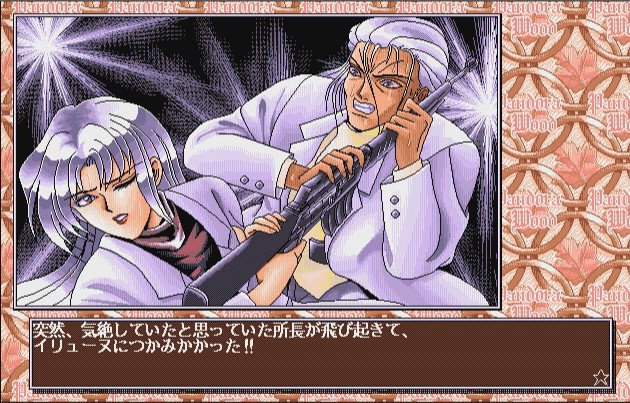 Themes: It's not really a theme, but a complaint over the plot. At some point we get to know that virus is already extinguished and the governing circles just conceal this information as it's convenient to govern the isolated communities under the domes. But in Gao Gao 3rd and 4th we get a different picture as humanity is eliminated save for very small nucleus communities. And whatever the explanations for that are, I still see a contradiction here. Such big cities as Aristo-city can't just vanish over couple hundred years. The only answer to that might be reproduction problems, but Canaan protagonist human boy Kite was born in the vault without problems, so I doubt that's the case.

Overall comments: So it's the weakest game in the series, but does it mean it's bad? I consider Gao Gao series to be the best visual novel series in the whole pre-Windows period. Thus Pandora no Mori surpasses a vast majority of pc-98 era games. And it holds much value for the fan of this series. First of all - most of jokes that keep repeating through following games are originated here (like in example "Information is transferred to the central host" "Oh, host is a man who is dating women!"). Here we finally get to know the origins of the mermaid story that goes through 3rd and 4th games. There are a lot of other symbols that get into following games (like Laila comes to a computer and exclaims that it's strange that it has not broken down after her approaching - and that theme repeats a lot for Ilia). 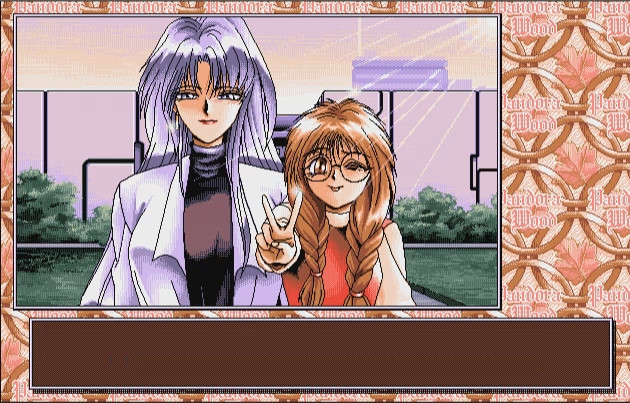