Foreword: Again, C's Ware game and EVE on top of that. I actually played it before EVE Zero as a substitute for EVE:Adam Doublefactor, but decided to to keep it for a later time since it has some imminent spoilers for EVE Zero. 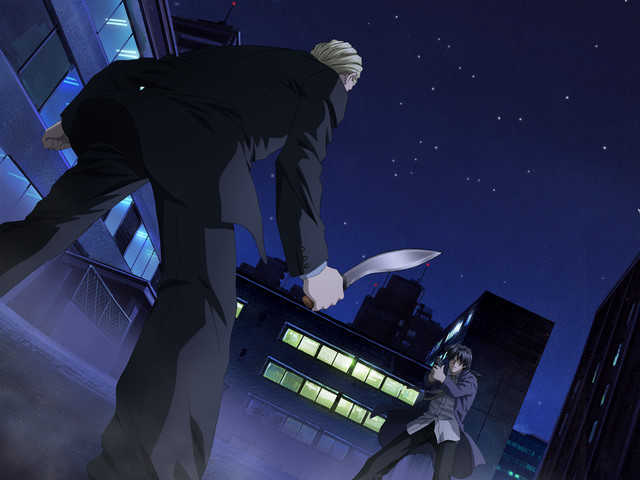 Title: Eve: The Fatal Attraction
Developer: C's Ware
Date: 1999-12-02
VNDB link: https://vndb.org/v6108
Length: 22 hours.
Game type: Point-and-Click ADV.
Youtube walkthrough: https://www.youtube.com/watch?v=FBhsyk1jhDw&list=PLENAECnNmAq_7odFKypHmj08DyKpfQfCN
Difficulty: More severe than the previous three EVE games that I played. At one point I needed to guess and move each of the characters to the location behind the Sun Mansions apartments to progress the story. In last titles the zapping moments were pretty evident since you got stuck at one scene and there were like only couple of actions available. Here you have 10 maps and lots of locations inside them, so you don't really know if you know to brute-force every object and command at all those locations again for both characters or look for a zapping spot for characters to meet. Another time I got stuck since at the old location you needed to click at lots of ambient objects for a new location (park) to open up. That was counterintuite at all and there were zero tips what needed to be done. Hopefully I found a very good japanese walkthrough and I'd strongly recommend to use it. 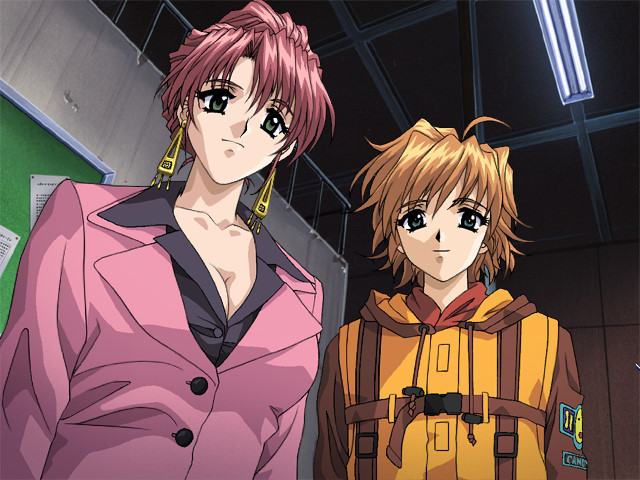 Synopsis: Detective Kojiroh receives a request to become a bodyguard for trading company director for seven days. But a lot of aspects of this task look fishy: director does not want to explain who or why is going to attack.
At the same time investigator Marina is tracking the serial killer who violently tortures their victims with a knife. How are those incidents linked with each other? What does the criminal strives to know from the victims?
Both plot-lines eventually come together only to reveal the grand scale of political game and conspiracy. 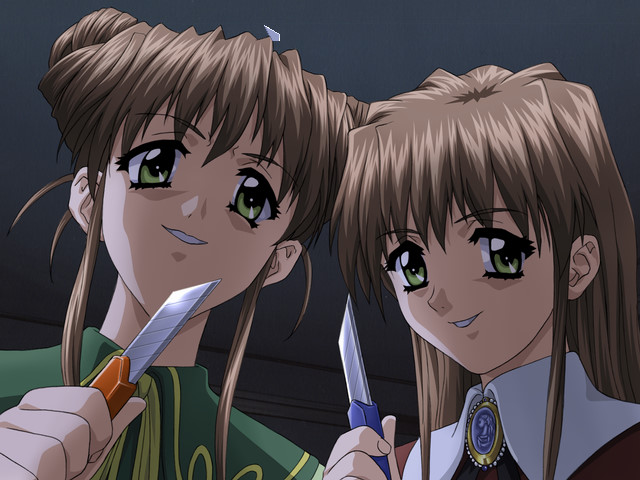 Rating comments: I tried to rate based on the weight of shortcomings noticed. I don't really have questions to character design - I rather don't like the style of the artist. He managed to make even good old characters ugly. Standing sprites for female characters don't bear comparison with the game prequels. Male characters are actually ok. Lots characters on CG are looking weird and sometimes just horrible. The happy face of Queen Prisia on Kojiroh's shoulder made me want to cry. Again, males on CG are mostly cool. Both Marina and Kojiroh lost a bit of their charm due to lack of humor or rather more drama. Kojiroh scenes are especially painful since protagonists only have their thoughts, but not dialogues voiced. So in dialogues his everlively nature gets lost and he becomes the guy who does not know what he wants. But after the event I hear his voiced thoughts and it gets much easier since this is our old humorous Kojiroh who's making sarcastic comments over the passed event. Still those aren't decisive faults to lover the score. What's important is that the ending day is rushed and for both Marina and Kojiroh it's just a series of flashbacks rather than coherent gameplay. There's a lot of new difficult to chew stuff poured on the reader without much explanation and that leaves the feeling of the ending being rushed with some loose ends.

Protagonist Marina and Kojiroh, of course! I've already said that they both lost a bit of their charm. Partly it's because both the protagonists have a new soul trauma. It was unusual for me to see those lively problems-free guys in depressed state at times. 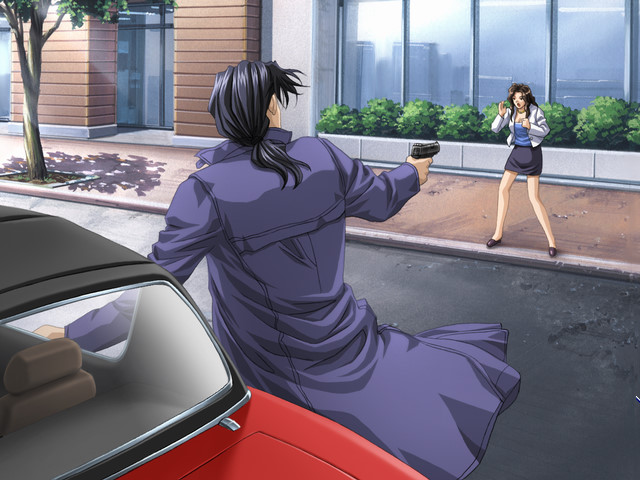 Characters: Well, first of all I'd like to notice that the opening is absolutely cool and I really awaited lots of gunfire, cool scenes and lots of new characters. However, the two characters featured in the opening (the blue-haired one and the yellow-haired one) never appeared in the game and that was really disappointing. The game also has veeeery few action scenes. But we're speaking about characters now. There are fewer cool female characters this time (again, lots of cool men characters). All I can think of is the head of secretary department of trading firm Ami and a very cool receptionist girl at the same company. But Himuro Kyouko character even turned for the worse. She is the source for lots of jealousy and drama in Kojiroh's office (she's Kojiroh assistant in this game) and the only time she's actually useful she features a huge explanations over the most trival pc topics so that I started to guess whether she was good with computers at all or just bluffed about it. But overall there's a great cast of characters, as usual. Nothing to complain, really. 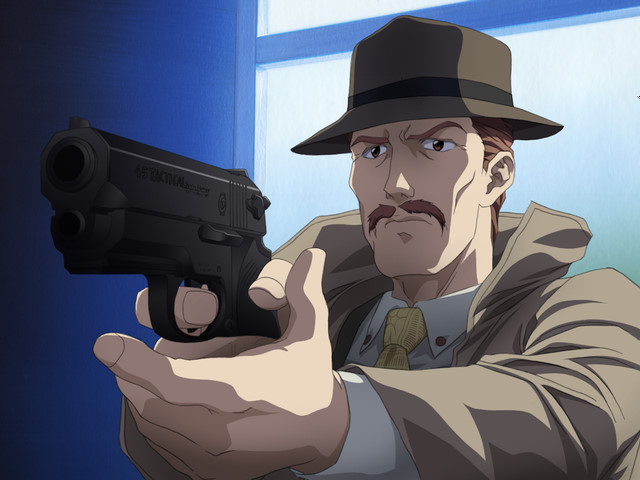 Story: Finally, the story. Well, I actually told too much of it in the synopsis. The structure of the story does not really innovating. Kojiroh becomes a bodyguard and actually Marina becomes a bodyguard of one surviving girl Yuka as well. And this part looked actually very similar to Burst Error. There was Mayako - now here is Yuka. There was 50/50 split of the time with the guarded person and it's roughly remains the same. There is also a scene of alcohol party with Marina+Yayoi+Yuka that looks almost identical to that of Burst Error with Marina+Yayoi+Mayako. It follows absolutely the same pattern and happens in the same apartment. The only difference is in Yuka lively attitude compared to reserved one of Mayako (Yuka has short yellow hair, she is featured on two pictures in this post). And the structure of the plot is not as difficult as in prequels. Basically, both protagonist just guard the target person and wait for attacker to make his move. The do get to know a lot of details about their protected person and their shady dealings. Marina has more screen time in this game and she actually investigates other leads, but in the end what only matters is the aggressor move, not her activity. The game had a very cool action opening. In the very first animated intro of the game Marina and Kojiroh cooperate to prevent Prisia assassination by a sniper. And there was a lot of talk that the town got flooded with illegal weapons. Those three factors made me think there was going to be lots of gunfire and cool scenes. But actually the main weapon of the game is a knife and no the only time something other than a handgun is featured - UZI - it never gets to be used. That sniper episode is not returned to till the very last minutes of the ending when we seen the short resolution of that incident. The only meaning of it seemed to be in that we get to know the face of the sniper, but it was not familiar to me - exactly because I have not played EVE Zero yet at that time. There are quite many references to Eve Zero and only couple really to the events of Lost One. Overall, I don't have complaints over the story apart of the rushed ending. It just looks that they wanted this game to be much bigger initially, but it was growing to a long playtime already so some things were scrapped. It's still our EVE and its story is still intriguing and totally unrivaled by any other companies of that time.

CG: I already complained about the artist in the ratings. So i'll mention only HCG here. There are TWO HCG in the game. Yes, just two HCG of bare chest and that's all. I was relieved to learn that since EVE Lost One and EVE Zero are all-age ones and thus there aren't sudden shifts here.

Sound: Everyone is voiced apart of the current protagonist dialogues (well, there were actually couple places without voicing). Protagonist thought monologues are voiced, actually. No complaints here. 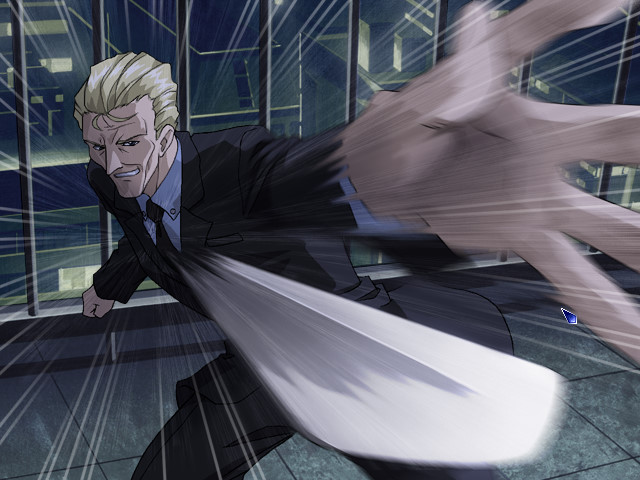 Themes and symbols: Well, game's not thought-provoking, but here are couple themes that I can discern:
1) I will live by my own rules. That thought appeared several time from both Marina and Korijoh. I don't think there's any special meaning apart of that they really break some rules sometimes there are moments of doubt where they turned into bad guys.
2) EVE theme lives on, naturally. By now everyone must know that EVE theme is cloning. In EVE Lost One there were quality developments in that field, but here in EVE:TFA there's rather a quantity development. Clones get numerous and that rises several questions. Some demand equal rights with other humans. Some demand freedom and isolation from the humans. Some just try to hide among humans. But the question remains : what to do with clones if their populations rises? This question does not bear much meaning nowadays though since human cloning experiments are forbidden worldwide.

Humor: I skip this part when there's noting to talk about. And this game is rather a serious one. But I totally adored the receptionist at president Ando (Kojoroh's client) company. That's a very stingy woman with a very formal attitude. Every time Kojiroh visits the company she asks of his name and the purpose of his visit. And every time there's a very amusing word battle among them. Kojiroh refuses to tell his name or purpose and she keeps asking. She looses temper and all her formal attitude in this arguement. Finally she gives up and gives a call to the director without knowing the name and purpose and Kojiroh is let in. That's fun enough, but the next day everything repeats itself. She refuses to acknowledge that Kojiroh visited just recently and keeps asking the same question. The argument vocabulary is different for each new fight and each following time there is more fun.

Overall comments: It's a new EVE game and I totally like it! If it was issued in the same format in 1999 instead of ADAM - that would be the game of the year 1999 right away for me kicking Kanon. And - who knows - maybe it's going to be the game of the year 2001 for me. As every EVE game so far it has entertaining and thrilling scenes, serious development, great characters and lots of interesting to read dialogues. The characters have become most dear by now and they stay true to to their personalities. It's like a new season of your favorite show. There are ups and downs, but that's natural since characters can't stay the same and they constantly develop. Those are your favorite characters and you can't stop loving them. 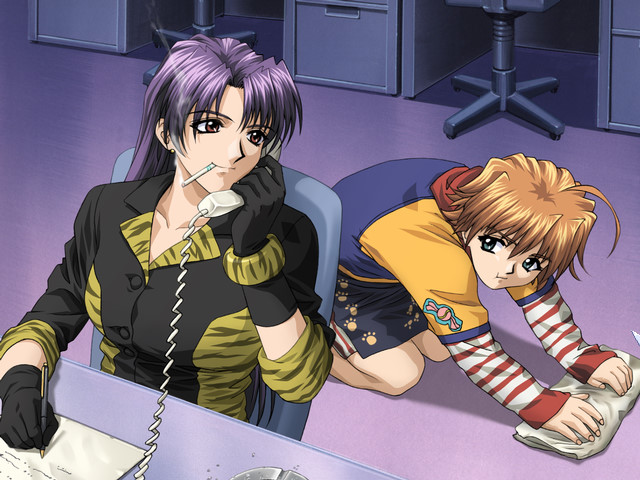