Foreword: Phew, this game took a while to beat! Command selection was not comfortable after point-and-click EVE TFA that I finished before Zero. Eve Zero is best be played as the third game in the series, after EVE Burst Error and EVE Lost One. 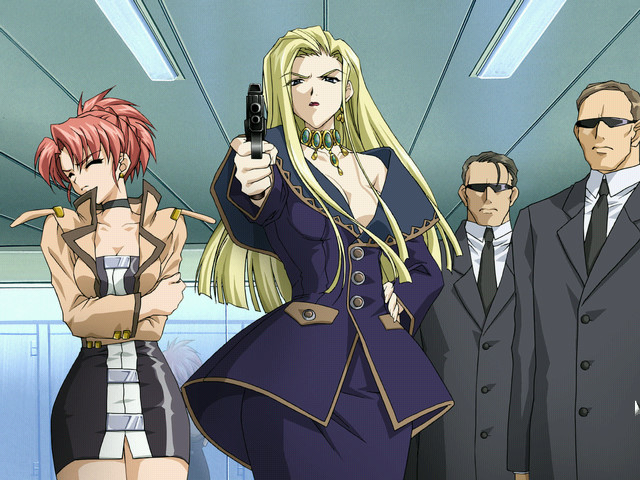 Synopsis: Events take place before EVE:Burst Error. Game starts with a wicked murder of a man with his entrails cut out of his ribs. But Marina job this time is just to escort an important american business-woman Ruth Bradford. Kojiroh is working at Aoi's place as a detective and he gets a case to find a lost child from Nishina genetic institute chief. Those banal tasks do not stop our heroes from getting involved into a much bigger scheme of serial killings and organs illegal trafficking. 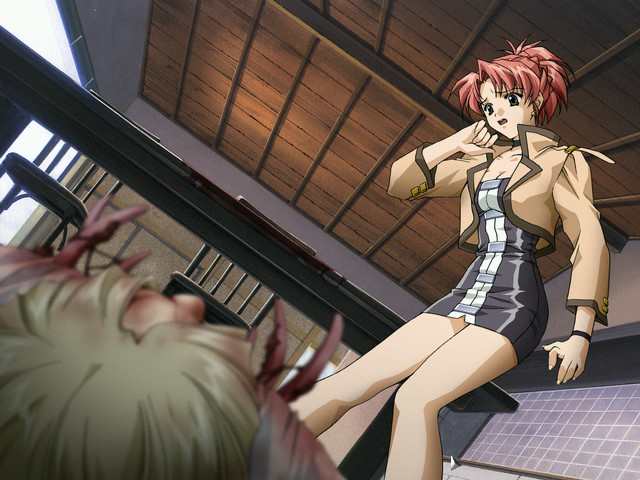 Structure: Game takes place during eight days and has two minor actions in the middle of day 3 and day 4 that lead to two different endings on day 8.

Rating comments: After the first non-true ending I actually had mixed feelings with some threads left hanging loose, but true ending left a good impression and most of the actions got explained. Game still does not really tell everything explicitly leaving a space for afterthought. So this time I have no complaints with the characters - cute, interesting and useful for the story. The only small complaint with the protagonist Kojiroh is that we don't get to hear his voice at all and another one is that his character is shown while withstanding a series of very serious shocks and he often gets to act based on emotions in this game. On the other hand Marina is totally cool. After playing EVE TFA I really thought we gonna discover her dark past in Zero as well, but she's totally cool and great-looking in her perfect dress. Story moves quite slow for the first 5 days with mostly information gaining, but few fascinating events - still it suddenly blows out on the day 6 and keeps an insane tempo through the day 8. 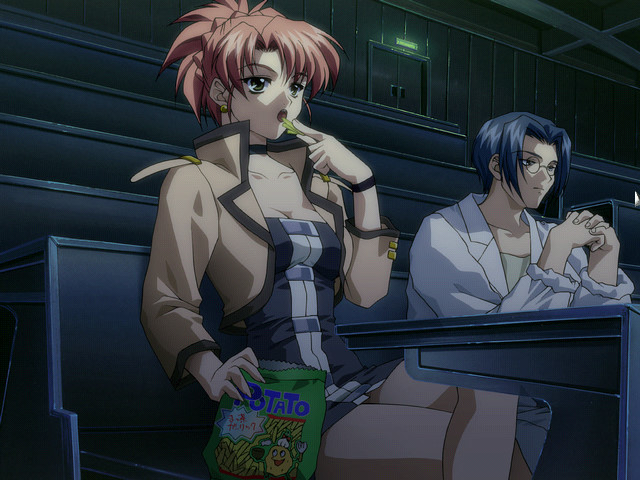 Protagonist Marina and Kojiroh. Kojiroh is not in his best shape though. He is not voiced and does not really joke. But Marina stands up for the both! That dress is something.

Characters: First of all, thanks to Carnelian all characters are beautiful. The main cast remains the same, so Chief, Himuro, Akane are as lively as ever. It was a bit weird to see how Himuro already knows both of protagonists prior to Eve Burst Error, but she wears different disguise so it's probably ok. Genzaburo (Kojiroh's stepfather) is back so we can again bathe in the light of his awesomeness. There's Glen and Nikaido too! A very strong character cast including lots of fresh ones that I'd prefer not to cover here for the sake of not spoilering. 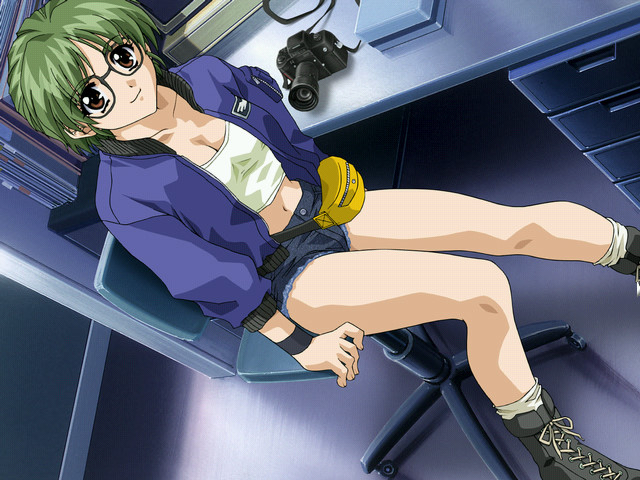 Story: So Kojiroh is looking for a missing boy Shin. And he actually finds him pretty fast. But he discovers some facts in the process that prevent him from returning the boy to his scientist father. That father is involved in some shady schemes and seems to be a boss of local mafia gang. The boy is also not so simple since he looses consciousness and takes actions that he does not remember about after that. Marina is just escorting an american business-woman, but that woman is also involved into some shady schientific business looking for organ transplantation technology. But the scientist Shasha Novalis who has that technology can only think of his daughter disappearance and Marina is eager to help. The girl is found pretty fast as well, but the girl is also suffering from loosing consciousness and takes unknown actions while in that state. And gradually the town gets drowned in blood. This is the prequel to the series, so there are only a few important for the next parts characters who are guaranteed survival. Most of fresh introduced characters aren't so lucky. That covers hardly some 5% of the story and the rest you will know in the game! There's a lot of mystery to follow up! 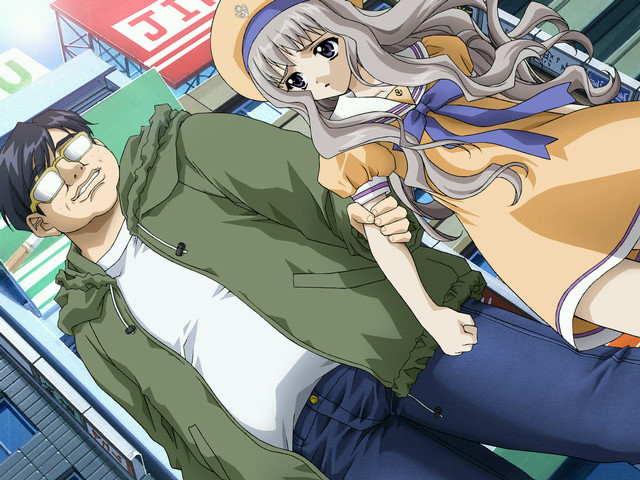 CG: Absolutely fantastic. Carnelian is a real pro. Some might think that his style is too cute for such a bloody game, but that's much better than the style of EVE:TFA where an unknown artist was invited with a lot of rough looking characters and CG to introduce.

Sound: Everyone is voiced apart of the current protagonist dialogues. Same as usual. 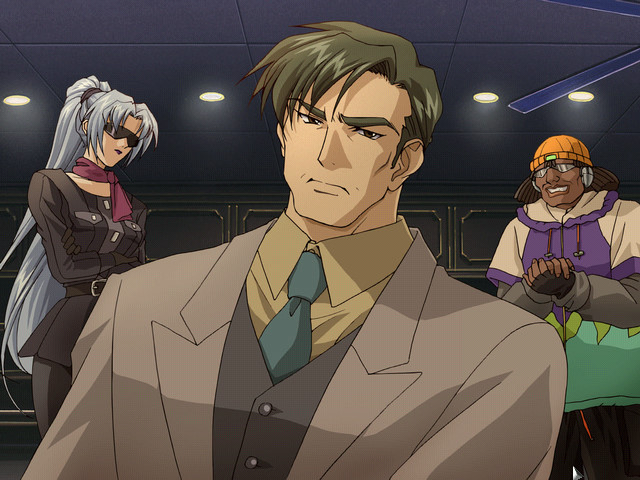 Themes and symbols:
1) Cloning there is an old theme, but here it stays the strongest since here is where it starts and develops initially.
2) Sacrifice is also an old one as well, but... It's a totally different sacrifice now. It used to be patriotic self-sacrifice, but now it's coercion sacrifice of other human beings in the name of the science.
3) The new theme is that of the spirit. Some characters get to live after they actually die in limbless state. That's a creepy and interesting thought.

Overall comments: Being a prequel EVE Zero introduces lots of new characters and mercilessly gets rid of many of them. That's why the game has the most amount of gore among first four games (have not played New Generation yet). The story itself is not really outstanding and moves at quite a slow pace while both of protagonists guard their protection target. But along with the story we get to know the conditions that led to events in Burst Error as well as more of the personalities of the main heroes. The flow is really lively thanks to appearance of many cute characters. Command selection with lots of locations to visit is quite painful though - I'd prefer just watching it myself. This is one of the greatest plot-driven games and I'm glad to be a part of it. Oh, and there's an obligatory for the series underwear girl party, of course (no, it's not that kind of a game)! 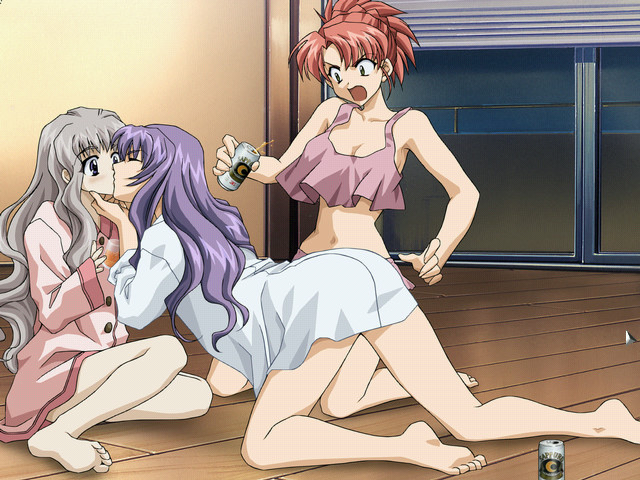