Foreword: Cotton Soft debut work Natsumegu did not snatch stars from the sky, but Reconquista seems to have a totally different, serious approach and thus arouses interest. 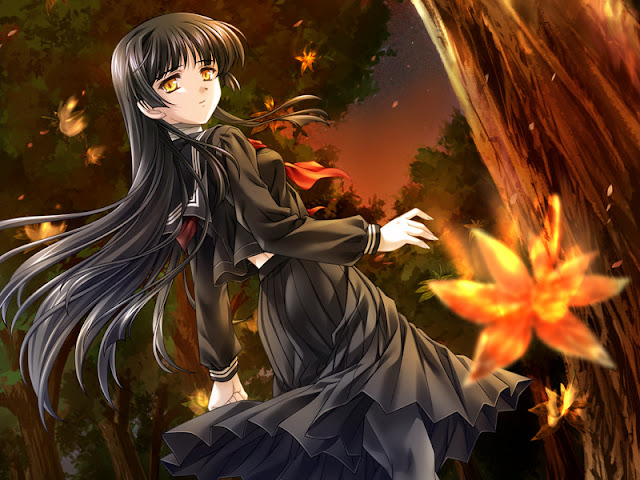 Synopsis:
There is a certain town on a reclaimed island. It was developed as an international residential area, but it's in ruins now. And there is a rumor that if you walk around there at night, a girl in school uniform will appear and cut off your head... 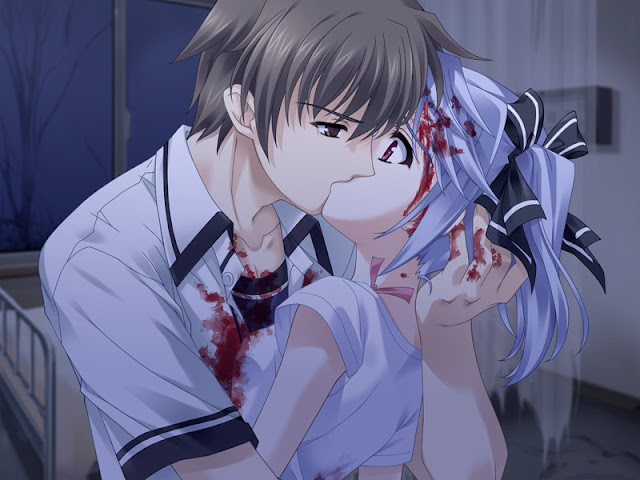 Due to mystery genre there are limitations to what can be revealed, but at least concept should be laid out to understand what to expect. So, different characters miss beloved dead people, and there is a technique to bring back the dead, but the key to it is urban legend about beheading woman. Game has three chapters that can be roughly described as present dimension, past dimension and true route that can be called future dimension just for sake of simplification. First present Chapter is the largest one, and it contains two protagonists zapping views and all the four heroine endings. We do approach beheaded woman in each of those routes, but in the same manner, so mystery does not really get developed, it's just observation from different angles. Past and Future chapters are focused on the mystery roots and nature, correspondingly. 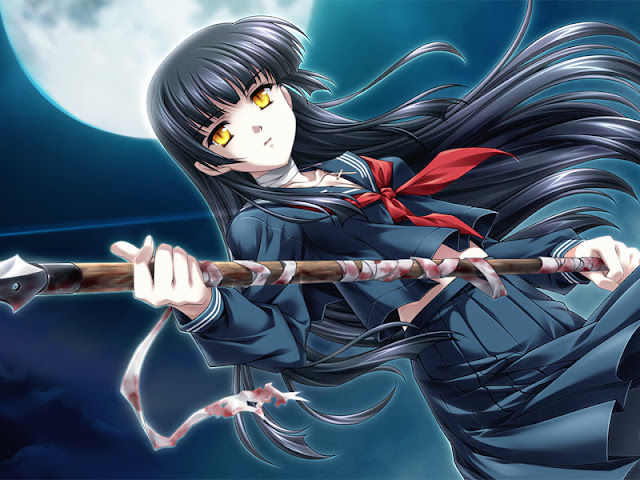 So mystery gets focused extensively, and everything gets explained, so even some emptiness is felt due to limited possible interpretations. But game touches important humanity questions for us to explore ourselves. Does one human life worth sacrificing another one? How does it cope with the concept of eternal soul? What will happen if everyone starts sacrificing other lives to save their beloved ones? Madness becomes the main theme of the game - and it contaminates not only maniac's mind, but even heroines minds who start to lose grip with the reality and ethics. 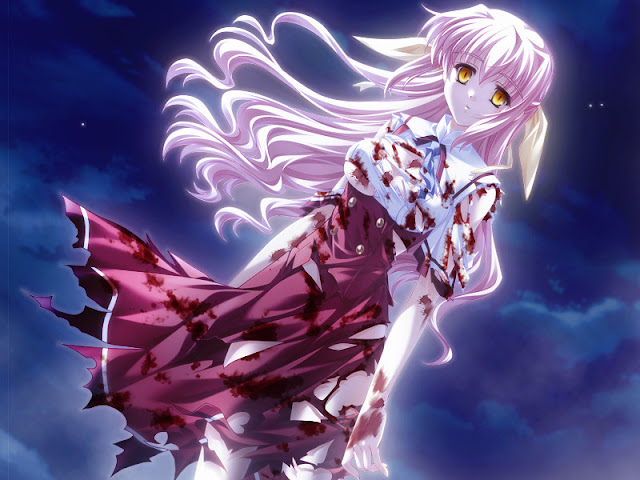 Game actually reminds me old game Kurenai by light. Same madness dominates the air, same bloody scenes everywhere, even main heroine of the two games basically looks and feels the same - in this game it's Kureha (even name seems to bear reference). Different heroines sing famous Japanese horror Kagome song which becomes a symbol of madness. I should also mention great BGM that contributes to the atmosphere a lot. 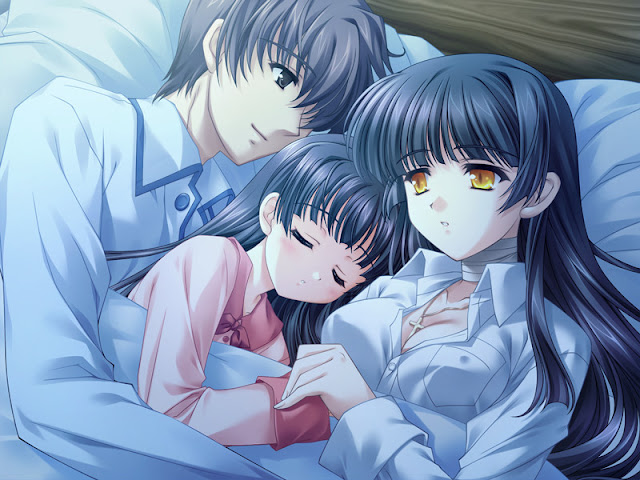 But aside from Kureha, heroines aren't developed much. Loli daughter Momiji is also greatly portrayed, but she is not a capturable heroine, luckily. Shiina also feels alive with her bitter attitude compared to more ordinary heroines Mahoko and Masaki who have their share of charm, but that's it, no development. Male characters in this game are especially subtle and passive. All characters are normal people without special abilities, so at times lack of excitement is felt. 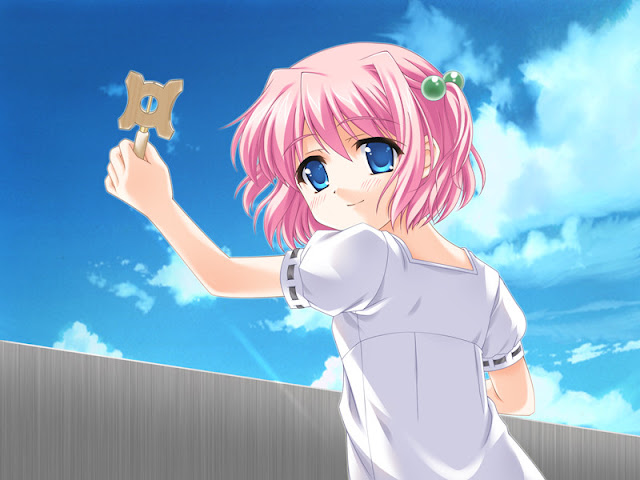 Reconquista story is not that complicated, but thanks to four protagonists zapping and different chronology it gets rich in taste and details. It's not our usual fluffy happy end game. It leaves reader with touching moment, heavy feeling, hope and afterthoughts to linger on. 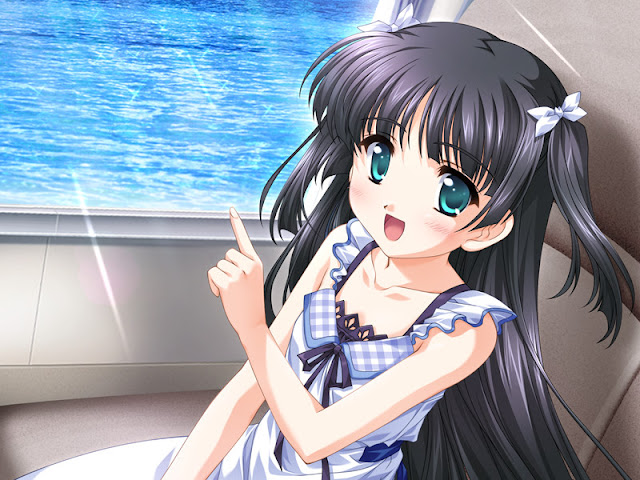 So, should I assume that only Kureha's route is the only one worth reading? What about the other heroines, especially the pink-haired one who has blood on her ruined school uniform? What's her story?

It does not really matter which heroine route to play since they bear same significance for the story. True Route focuses on Kureha, anyway. Mahoko in her route gets cursed, and Kureha severely cuts her clothes, but delivers zero wounds in attempt to bring her to senses.

I see. Was Kureha able to bring Mahoko back to her senses then?

Protagonist finds Mahoko in this state and leads her home. On the way they meet Kureha with her weapon unsheathed, and she says something about Mahoko being possessed. I'm not too sure if it was Kureha who made the cuts, or beheaded woman, or someone else. But when Mahoko gets home, she is already in a perfectly sane state.

I see, at least Mahoko is back to normal. Sad that each heroine route bears the same significance for the story, thus leading to repetition. Don't you think so? Only Kureha's route is unique.

Heroines routes only give tips about beheaded woman, killer and past strategy, so it feels ok as they can't reveal main mystery yet. Main story is told in last two stories, but yes, Kureha is the most important heroine for the story.

The second story is about Kureha and the future, huh? Interesting.

Anything happens in it?

First half of True Route happens mostly at graveyard as past victims graves are visited by various girls. Then we get to see full scene of villain talking to Kureha from the prologue. And it's time for main conflict where protagonist, Kureha and protagonist take part in.

The main conflict where the protagonist, Kureha, and the antagonist take part in. I wonder if the other girls have a role to play in it, even if it's small?

Well, Mahoko and Shiina are found in a room during last confrontation scene, but it's only an episodic encounter. There is no place for heroines other than Kureha in the ending.

I see. Wait, are Mahoko and Shiina okay? I assume they're only knocked out or restrained? Too bad we only see those two in an episodic encounter during the last confrontation scene. The flaws of this type of VN, most of the heroines not picked disappear for no reason when going into a heroine's route.

Mahoko and Shiina are found in the room after the battle is over, so they are ok, but ready to fight anyone entering the room. True route is not even about Kureha, she is just most important for the drama. Final route is about overcoming the tragedy and living happily together with daughter Momiji and younger sister Yue. That's why last scenes of the game are devoted to Momiji and Yue. There is no room for normal heroines. They had their individual endings in the beginning of the game.

You think it's weird?

Two protagonists actually feel weird as it adds unnecessary complexity with all the view shifts. And it limits possible endings. But it's nice to see a game that focuses on something other than heroines. It is what makes Reconquista special and worthy of notice.

True. Reconquista focuses on the perspectives of two protagonists and their viewpoints instead of the heroines themselves. It's one of the few VNs that does this, and that makes it quite unique, despite limiting possible endings with the heroines.