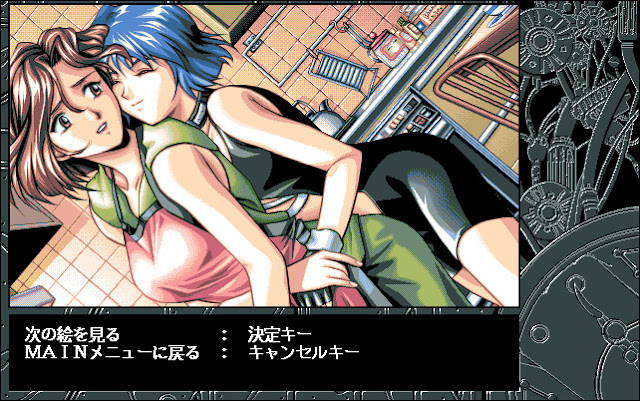 Foreword: I keep exploring the vast vaults of Silky's games. This time it's even more suspicious work - a full scale yuri game. But it has many SF elements and even has genetically modified mutants - knowing Silky's they would not settle with an ordinary yuri work.

Synopsis: The future isn't so bright. Pollution has severely weakened Earth and all of it's children, including humankind. Human DNA is too weak to reproduce itself and scientists are desperately trying to revive the human DNA. But every attempt fails, even the desperate attempt to fuse Human and Animal DNA turns out to create mutants that run amok.
Everything seems hopeless. But suddenly, scientists detect a space-time displacement, a gap in time. The gap will hold for a couple of days, and during which people may be sent through time.
Your mission as a Half-Human, Half-Feline, mutant-hunter Conny, is to back in time to the present (the late 20th century) and recover samples of healthy human DNA. 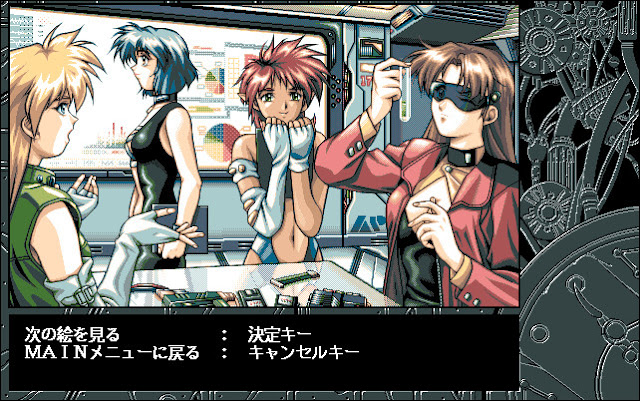 Rating comments: This is not a masterpiece, so it can't be 7 or higher by my scaling. Well, the rest depends on whether you play yourself or watch my playthrough with scores of 4 and 6, respectively. Original game has too many (10+) H events and has a very time-consuming and boring ventilation system maze crawler. I've cut those in my video reducing overall length almost twice without hurting the story. The whole first half of the game is packed with H events so densely that I really started to think Silky's made a plain ero-centered yuri game. But after two hours of such struggle finally story showed up making it a worthy Silky's title. Heroines in this game are quite memorable and well done, so characters get a high score. Protagonist Conny has a lower score since she does not even try to think for herself - first she follows orders and then her emotions.

Protagonist: Conny is a so-so protagonist since she has a strong sense of loyalty as a mutant towards humans. She can turn to a cat voluntarily, but she only uses that to prove that she comes from future and to get into other girls beds - only very late in game she actually it appropriately to travel through the vent system (and she manages to carry fuel canisters with her through the vent in cat form - don't ask me how). It's ok for a protagonist to be dense, but this time I felt no sympathy towards protagonist. 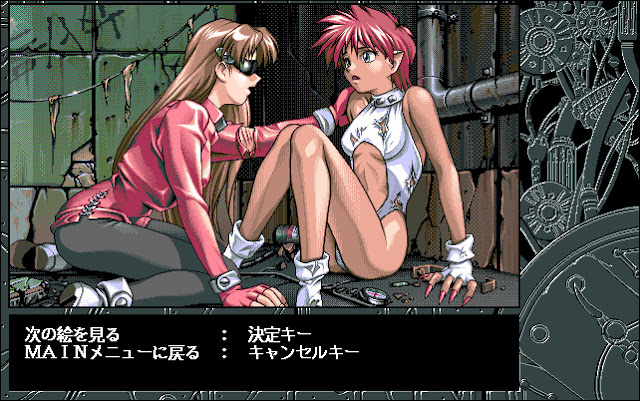 Characters: There are two casts of characters - from year 1996 and from year 2296 - first represented by Kanako, her mother and sister and second comprised of military base crew. There are too many H events in the game, so most of dialogues are scrapped or serve as a prologue to next H scene, but still characters are solid here and dialogues feel alive.

Story: That's the difficult part. Conny arrives to Kanako family backyard in the form of a girl and is brought home by Kanako. During the whole first half of the game only gathering of genetic material happens. First the whole Kanako family cooperates, then Kanako invites a friend and then Conny manages to get into the school as a foreign student and gather genetic material in form of women fluids there. But the second half of the game brings much more in the story department. Conny's superior Dr. Kanzaki suddenly arrives to 1996 and kidnaps Kanako. When Conny flies back to future to save her new friend, she finds herself trapped in a cell-like room without freedom of movement. What's going on there? Why future military needs Kanako? What can Conny do about this situation? There are a lot of mysteries uncovered closer to the end of the game and some of them are totally unexpected and fascinating. 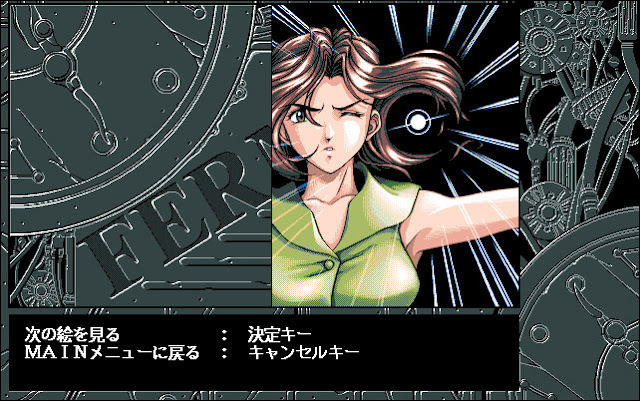 CG: Again, quite few normal CG and too many HCG. At least palette now is much more bright and vivid.

Sound: Not too many tracks, but I liked how in crucial story moments all the music stops and couple minutes are spent in a total silence - that benefited the atmosphere.


Themes:
1) Time travel. As far as I understand the game violated all the logical laws of time travel like meeting yourself in the past. No big complaints here, but it gets an amateurish touch to the story.
2) There are no men in the game. The single time I saw man mentioned is when Kanako wanted to invite her friend and Conny asked whether that friend was a man or a woman. It's pretty weird to have a good dozen of characters with all of them being women.


Overall comments: This is mostly a yuri-intensive work, but the story turned out to be surprisingly good considered limitations of the setting. It's only disappointing that the action part of the story is hidden closer to the end of the game behind the wall of numerous yuri events and then the maze of vent system. It's an interesting and beautiful game with very nice characters, but I would only recommend watching my edited video version of it if you're interested in the story like myself. 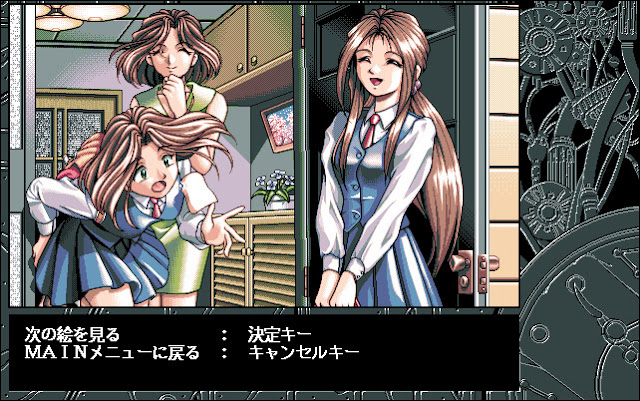