Foreword: This game's synopsis shattered my imagination from the first second and only the rarity of the game stopped me from playing it at once. Did my high hopes of the game come true? You'll know soon enough.
Title: Lofty Form
Developer: Aaru
Date: 1997-11-28
VNDB link: https://vndb.org/v15188
Youtube walkthrough: https://www.youtube.com/playlist?list=PLENAECnNmAq-EjfsuBaQRr6x65QIhzOeO 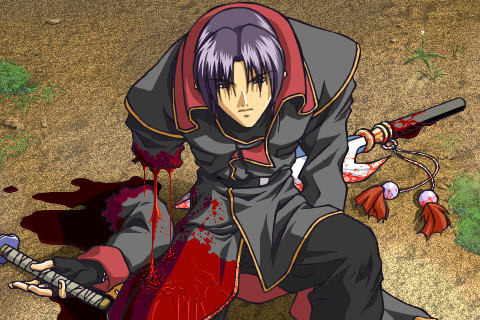 Synopsis: Yakushiji Shion is the eldest son from the clan that punishes bad people. But after he assassinated Empire's shadow Kurobe Akiyoushi, it is regarded as a rebellion against the Empire. He gathers the clan and moves towards the North. Every day they are attacked by pursuers. At the same time he is chased by the girl Hiramatsu Yae who fell in love with Shion.

Rating comments: Game has quite low production values, but the story was decent and I struggled between 6 and 7 as overall rating almost till the end. I can't deny the coolness of main character Shion who speaks like 5 times during the game total, but the story in the end started to obtain various flaws and ended in a fluke which is unacceptable for a masterpiece level game, thus it's 6. 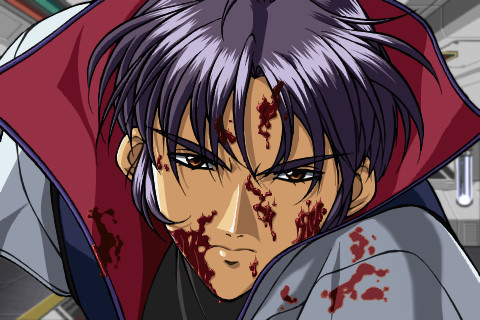 Protagonist: Yakushiji Shion is pretty much everything in this game and half of game's (10?) CG show how cool he is. He speaks only a few times in the game with very short one-word phrases and most of the time we just see "..." whenever he is asked anything. That adds mystery. But he's so cool mostly because he's the only strong character and basically he defeats any enemy with just one strike. And we're being hinted that his clan might possess the secret of immortality which raises evaluation of Shion the Immortal even further.

Characters: There is a bunch of characters who accompany Shion. Notably his step-brother Koriyama and step-sister Sayaka. Both of them were found and brought up by Shion's father. Next there a girl Hiramatsu Yae who tags along after she's saved from the hands of country's general who was set to making her a slave doll. There's also the princess girl and the spy girl who accompany the party at the certain point of narration. There is a good number of enemies, but to my regret enemies aren't really charismatic and for the most time that's just some masked ninja. 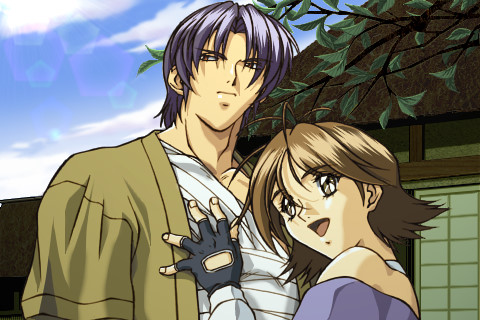 Story: So the country of narration has not had wars for some 10 years at least. Everyone enjoys peace and noone carries weapons anymore. Yakushiji brothers on the other hand keep wearing weapons and bring self-justice to the villains of the country. It's going all right till they murder the great commander and first general of the army who lived in vice. But empire did not want to announce the fact of his death and instead sent remnants of warring clans to punish Yakushiji brothers. Yakushiji clan leader understands that killing general-commander will lead to consequences and because of that he sends his sons to the North and tells the reason of it only to Shion who is not really talkative. So first half of the story takes the journey to the North and that's all I can say without spoiling. More under a spoiler banner.

So... as it turned out the only reason to go North was to get the approval of local shrine maiden to become the successor of the clan. There is also something about gaining immortality this way, but it did not really help Shion in the confrontation with all the villains at once upon arriving back to Yakushiji clan village. Shion got his body pierced with spear and his right hand cut off. The companion of that shire maiden is a talking cat... who turned out to be the God of cats. She later could transform to human form with cat ears as well as ferocious fighting cat form. Among the ninja villains there were also God of Mountain and God of Wind in form of mutated beasts. But the main enemy of Shion is fully bandaged mummy-like warrior Ma Lu. And he turned out to be a created in laboratory human with the aim to create an immortal soldier. That Ma Lu wrecked the body of Shion really bad upon the first confrontation cutting his right arm. And in the final confrontation they were just looking silently at each other for a long time, then Ma Lu said follow me and led him to his master allowing Shion to kill him, because Ma Lu discovered some inconsistency in his master's plan. What's even that about? First authentic samurai story, then fantasy elements and finally underground laboratory genetics? As I see it the story went to hell midway. Also it's absolutely unclear how Shion managed to escape first battle with Ma Lu. Basically we were shown that Kuriyama was preparing explosion in the village to get away, then we're shown how shirine maiden says her cat that she has to go, otherwise that person will... Then she puts on a rucksack and goes away instead of teleporting or smth. Next scene is two months later Shion recovering at princess mansion and a bit later Shrine maiden arrives. Reader is clearly taken for fool with all that mess. And it's not the only occurrence. We're hardly ever shown the outcome of the fights. It just ends and we move on... 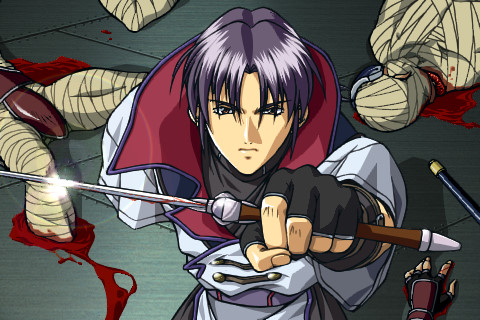 CG: For the first 2/3 of the game there are zero CG! There are some small CG which are like 50x50, but that's not even remotely enough. Then we get to see two almost the same CG of Shion fighting and the end gets packed with like 10 CG in succession. That's a very weird CG placement that leaves a very poor impression of the main story events.

Sound: Only BGM and in traditional Aaru style - after melody's over it does not cycle and up to the next story shift there's only silence to accompany you. 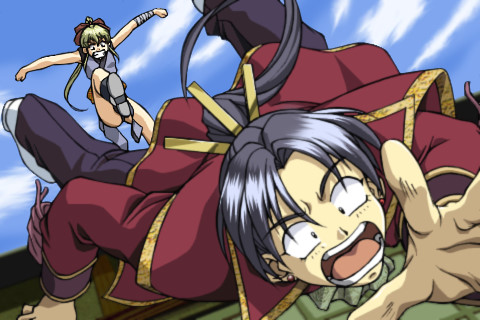 Humor: There is none, if you don't consider humor those eternal games in silence with "..." repeated over and over by different characters. But one case was so absurd that it made me laugh. Koriyama follows rogue Makino to some house and finds there Makiho and two just killed warm corpses of a man and a woman. But Makiho says it was not him and just left. Then Koriyama is asked by a street girl to kill rogue Makino. Koriyama asks what are her proofs.
- He treated me poorly and commited me on many different occasions.
- Uh-huh.
- He killed Rutarou.
- Uh-huh.
- He killed both my parents.
- Uh-huh.
- After that he killed governor of the town Kirishima.
- No way! A governor? What a horrible person. 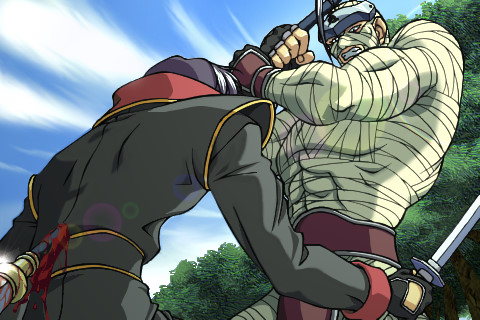 Themes:  I always try to guess the meaning behind the title of the game. Lofty form - what's that even about? Apparently lofty means of imposing height, thus lofty form means something like "high style". The synopsis indeed features high style narration, but the form and the essence are two different matters and should not necessarily coincide. So after all it's only form that remains lofty here.

Overall comments: I probably placed too much hope in this game. Its low production values and plot inconsistencies described under spoiler did not let me really enjoy the game. But it's still a plot driven samurai story with a very impressive protagonist and might be worth your attention. 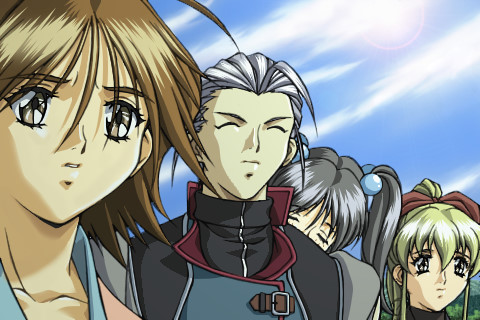