Foreword: I have very high evaluation of the games of the series and since this is the only Windows game of the series (I'll play Lipstick ADV.4 as well just out of spite, but it's universally despised by the fans of the series), I just had to play it. It took me quite some to realize that wish, but finally it's there. Welcome to the Lipstick ADV world!
Title: Lipstick Adv.EX
Developer: Fairytale
Date: 1999-04-23
VNDB link: https://vndb.org/v7334
Youtube walkthrough: https://www.youtube.com/playlist?list=PLENAECnNmAq_wBpUoznkGk-MxcM3tBVDt 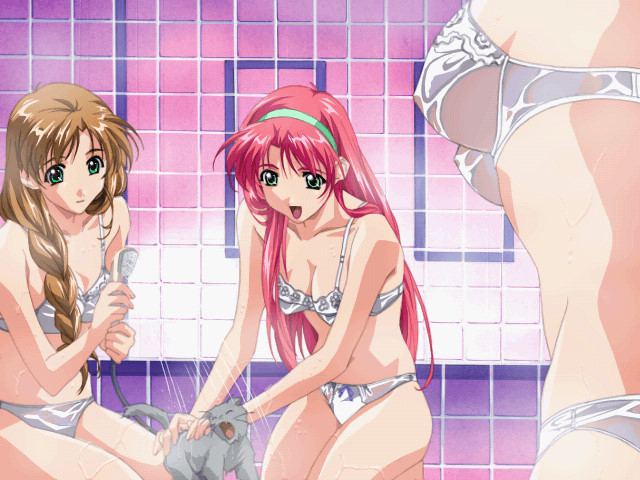 Synopsis: Hidaka Koume heads a detective club at an all-girl school. Ichijou Megumi is a detective who got dragged by Koume to be a councilor for the club. Everything starts with stolen underwear at school, but then girls start to be assaulted with a knife right at the school and terrorist acts start to happen around the city. At that moment Megumi gets quite an ordinary surveillance order that turns out to be a much bigger deal. Is it possible that terrorist acts and mysterious case are connected somehow? 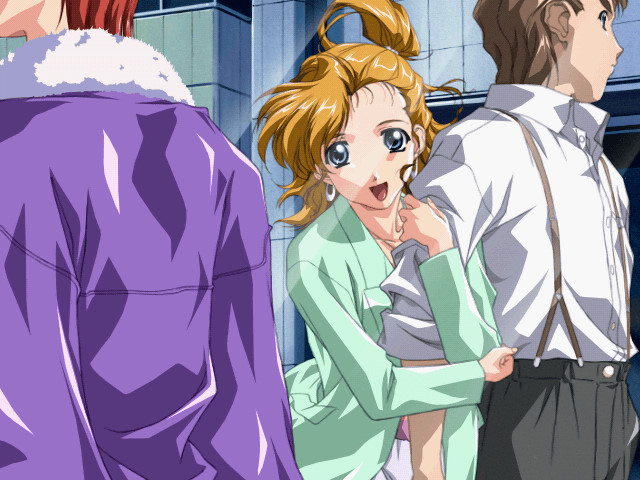 Rating comments: Game's absolutely marvelous. Luxurious graphics, full voicing including protagonist, bright palette, absence of character sprites in favor of CGs, intriguing story and quite many mysteries that get unwrapped one by one. So, why not a perfect score? There are some flaws. Story is mostly developed by Deus Ex Machina even though each of protagonists eventually manage to find a clue to the culprit. Between the chapters there are often girl assault events shown right at school, but for some very convenient reason all the girls just keep silent about that till the very last chapters. The ending part is quite pressed with events as we get from total despair and no clues to finale in a mere hour. Ending is too convenient and there is no epilogue (although there are CGs in the ending which show the future of heroes, so it's suffice for an epilogue). Game mechanics is a bit troublesome during the major part of the game as you need to visit some 15 locations and click through all the objects. It gets especially tiresome with people as you need to click on their mouth, face, hair and costume a lot of times till the dialogue goes on - and it's hearing all the same "Don't look at my face/hair/suit so much" over and over again. But I happily clicked through all those moments and some of the plot moments that were in the following as well (since you never know when new dialogue starts - after clicking on face/hair or suit for the tenth time or more). But, believe it or not, all those shortcomings aren't really enough to lower the score. I just did not feel satisfaction from the rushed ending and that hurt the aftertaste. 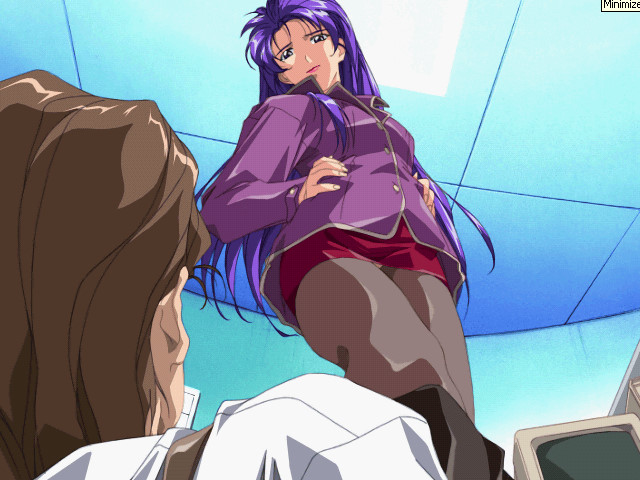 Protagonist: Let's make it clear - game was meant to be a new Eve: Burst Error/EVE: The Lost One. It shares a lot of similarities with that great predecessor. But at the same time game had to be in the vein of past Lipstick ADV games. Ichijou Megumi is very similar to Kojiroh. He holds a one-man detective office, also rents it and constantly has problems with money. But Megumi is really young and much less charismatic that Kojiroh. He's also not a genius and spends too many evenings drinking at the bar (how? at the start of the game his wallet only has 930 yen). In the end he makes a stupid mistake of leaving his office door open and he can't recognize a woman who wore big sunglasses even if he sees her everyday. On the other hand Koume is a traditional heroine of Lipstick ADV games, genki long red-haired girl. She also does not show any signs of genius detective unable even to pacify the only two members of detective club besides her. So each day they spend oh a whip following wishes of its member Rie. Koume was able to obtain her clue by doing the very basic police actions that police absolutely neglected to do. Koume part is much bigger than that of Megumi, because it's devoted to relations between many girls in school, I think eight is the number. It looks organic and nice, but it was really difficult to say where the game was going till the 6th chapter. 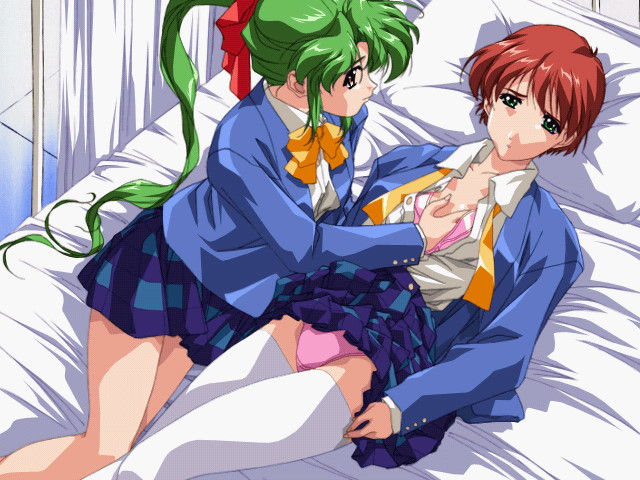 Characters: As I mentioned, there are some 8 girl characters at school and one woman outside of school, plus some male characters - bartender, police detective, school teacher. But since there is just one route, it was difficult to tell which heroines were important and which weren't. In the end only Koume detective club companion girls had an important role - genki and light-hearted Rie and serious reserved Aki, who is not interested in playing detectives and got dragged to this club by Rie. There's also girl Risa who plays a huge part as a rival of Kouka for Megumi and later on as a witness. And there is another girl who plays a big role because all the serious events start with her death. 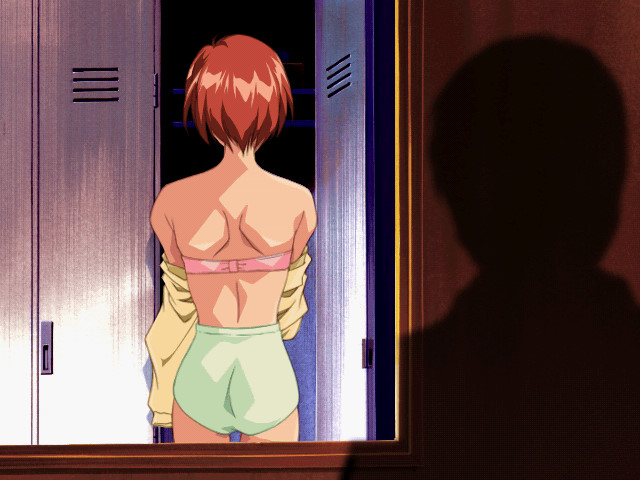 Story: So the outline is set in the synopsis, but I'll try to elaborate without spoilering too much. First two chapters are just fooling around and improvised dates. Someone steals underwear at school, so it's just jokingly search for the pervert. But then one girl which both protagonists met a lot of times during first chapters, is suddenly found dead in peculiar circumstances. There are about two more chapters just about the shock and despair after that event. But actually only Koume was able to find the clue of the culprit. Megumi found his own clue, but to his own case he was given as a part of his job, and those two cases turned out to be parts of one bigger case and bigger person. The whole bombs part is an inheritance from old Lipstick ADV series and looks quite alien here. The reason for bombings remains vague unlike the murder which has a thorough explanation in the form of culprit diary which we again very conveniently are just led to. So it's not a good a good detective story, but a nice mystery with great characters and valid emotional aspect. 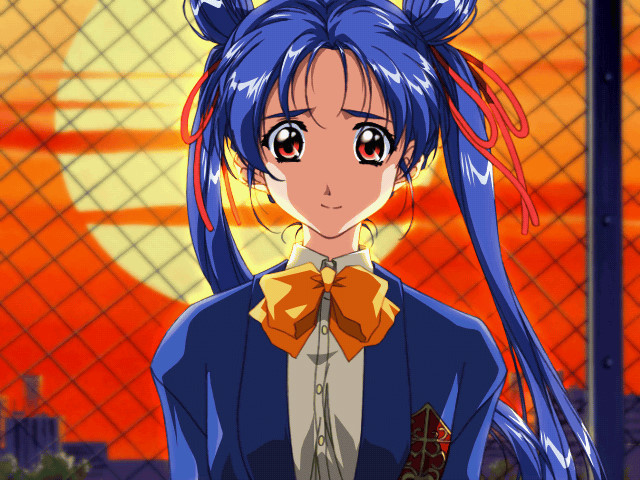 CG: 295 CG. We're difficult to be surprised by this amount with modern games often having 300+, but 295 is a huge number for a game from 1999. I especially liked that there aren't really normal H scenes in the game. Most of the HCG are very episodic and just parts of very brief events between the chapters. So it could very easily be an all-ages game.

Sound: I like the basic midi sound for being ... expressive, but I enjoyed CD-DA BGM even more in the end. Good tunes and great full voicing. 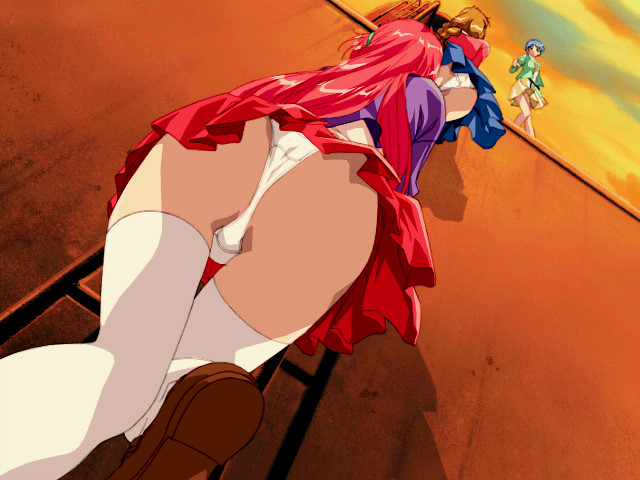 Humor: There aren't real gags here, but dialogues are often very funny in the beginning and those connected with light-headed Rie later on. 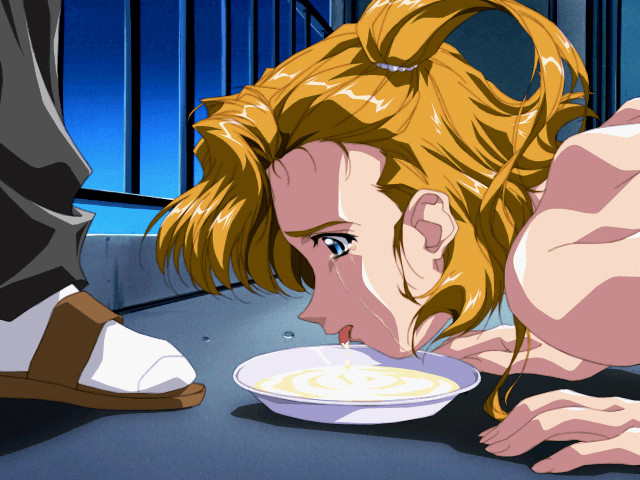 Title and Themes:  So what does EX in title stands for? In my opinion it was meant to mean that unlike predecessors it has very explicit X content, but X could also mean it's the 10th game of the series, so EX was chosen instead. Another question is why the game was not just called 4th part. In my opinion it's because main heroes are different from Gorou and Otomi, even though the archetypes of the characters are quite the same.

Overall comments: Lipstick Adv.EX is not a kamige, but is a very delicious treat if you don't expect serious mystery out of it. Point and click sequences may be irritating at times, but bear with it and you'll get one of the best visual novels of the 1990s. 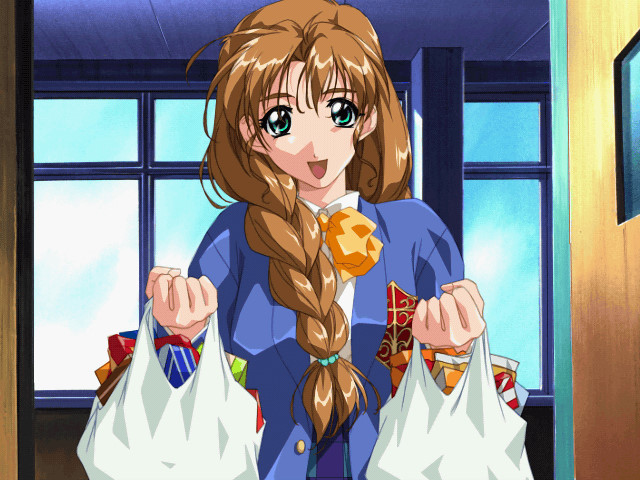 i'm curious if you can make a short walkthrough of other Lipstick ADV games as well ? i want to know more about this franchise

thanks for the articles, too bad that i can't experience those games

Dude, why'd you kill off your Youtube channel? I just found it and was looking forward to watching!

Was not me, actually. Looks like I've made a tiny mistake having a thumbnail with a censored boobs in the corner and it was such a big violation that whole channel was shut down even thought there were no strikes before that. This whole strike system is such a scam since one miss and you're out.

Wow, that was harsh. Maybe you could try to appeal it?

Of course I did. Same result. Time to think how to reshape the blog.