Foreword: I was really impressed with Viper F40, claiming that was a masterpiece. It's only natural I'd take on Viper F50 which is same SF single detective story. Is it a masterpiece as well?
Title: Viper-F50 ~Mirai Tokusou Bureiban~
Developer: Sogna
Date: 1999-04-23
VNDB link: https://vndb.org/v7490 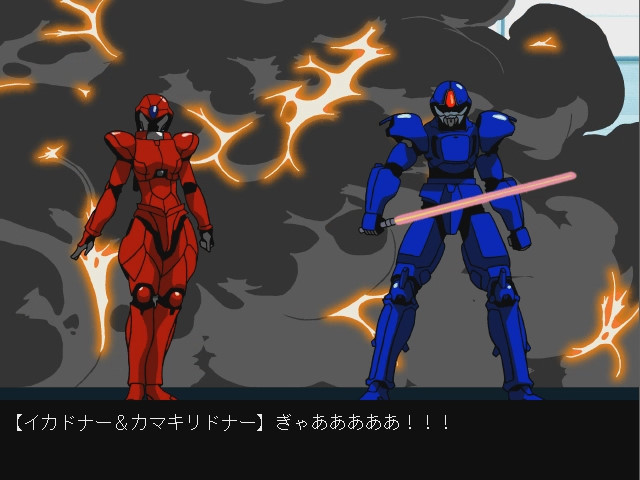 Synopsis: The sequel to the "Future Investigator Bravan" story told in VIPER-V12, VIPER-F50 continues the tale of Bravan and his partner Anri as they fight against the forces of Donarghe and its army of mutants. Colonel Gel returns with a plot to defeat Bravan by capturing Anri and fellow investigator Shine. However, Gel's plot for world domination unknowingly hinges on the faith and abilities of her young protégé, Mari.

Structure: None
Length: 1 hour 30 minutes
Game type: SF police patrooling story
Difficulty: Very easy, one way road.
Character Design rating: 6/10
Protagonist rating: 7/10
Story rating: 2/10
Game quality: 6/10
Overall rating: 5/10
Rating comments: 5/10 is a very low score for me and that means one thing - I'm disappointed. Compared to F40 game is on the same engine, with similar character designs and animations. But story-wise, it's a huge step back. Length got cut 2.5 times. All the "detective" legwork around the house is limited to 4 locations that you check over and over - Shinjuku, beginner school, junior school, high school, and that's it. Story got so thin that it's almost non-existent. It looks like Sogna started with a great idea to make great stories out of previous short multiple stories issues, but on the way just went with the flow and started to make just a bit longer single same silly stories instead. 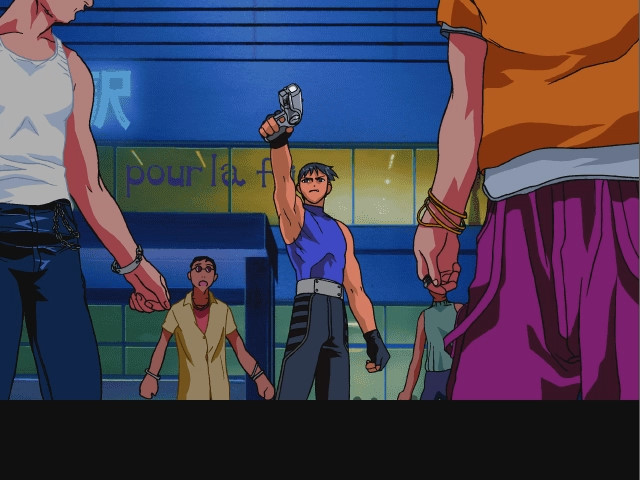 Protagonist: Bray-Ban is the main character here. He can transform to some kind of SF power ranger at will. He's kind, compassionate and reliable. Well, since he's male character, he's the only one who stays undefeated. He is voiced and looks ok, so I'm quite content with him giving 7/10 to protagonist. 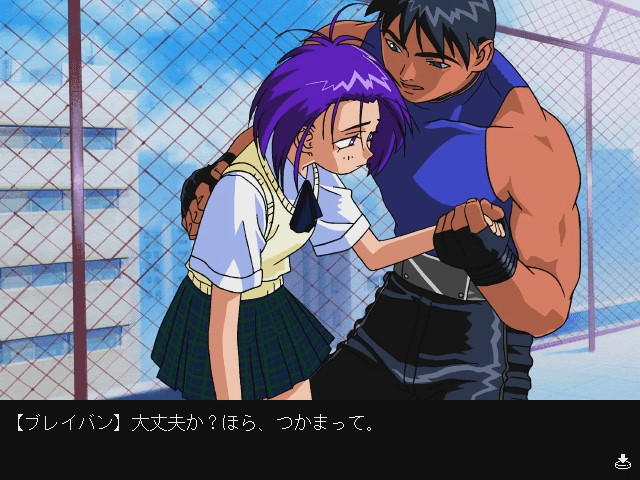 Characters: Anri is green hair assistant who can not use the biosuit. Shine is red hair partner who can use biosuit. Both characters and the only villain aren't drawn cute and are difficult to sympathize with. That's why 6/10. Story: SPOILERS. The cornerstone of such low score. So Bra-Ban patrols the schools when he finds donage monster assaulting a girl. He fights donage, but girl tries to kill him, and that attempt is only prevented by partner Shine showing up and destroying girl's weapon making her flee. Next assistant Anri finds herself useless and upon discovering the next of donage under junior high school, she goes exploring it unarmed and alone (can it be more stupid?) getting caught by donage. Shine and Bra-Ban decide to split to cover more territory while searching for Mari (Why??). Shine finds Anri, but blackmailed into disarming and stripping under Anri death threats. Bra-Ban saves both girls from monsters. Bra-Ban is assaulted by the same brainwashed school girl Mari who attacked him in the beginning. He manages to cut off her weapon filled with explosives and calm her down only for her to be killed by donnage queen Gel-sama. Bra-Ban descends into donnage den alone (story does not teach him anything) and gets into Gel-sama trap. A girl in Shine costume shows up and saves Bra-Ban - that girls happens to be Anri who put on Shine suit. The end. This story is beyond redemption. 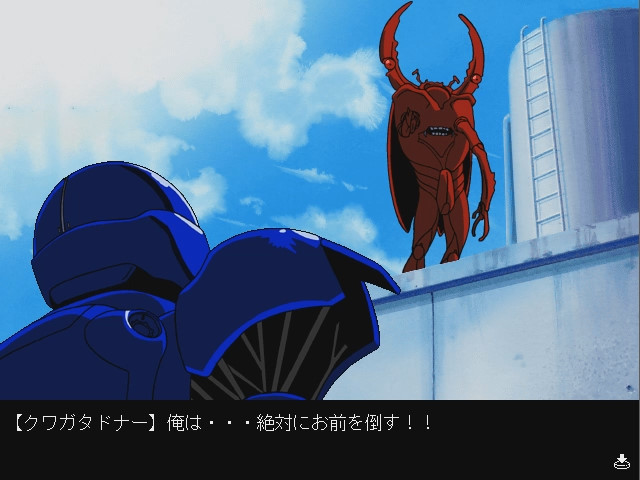 Humor: There is one nice character in the game. It's donnage stag beetle monster. He retains his human feelings and behaves like a grandpa to Mari. He defends Mari before Gel-sama, then tries to attack Bra-Ban first in order not to traumatize Mari. Upon defeat he conveys to Bra-Ban that Mari would have explosives in her weapon secretly inserted by Gel-sama, and that information allows to pacify Mari. So these geezer talks of Stag beetle donnage deliver quite a lot. All those superhero ranger banters also were funny at times. 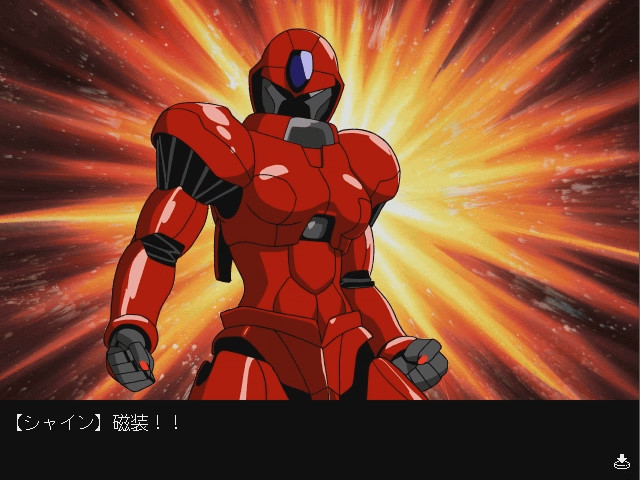 Title and Themes:  There aren't real themes. One semi-theme is sacrifice as Anri put on suit her body could not handle to help friends. The other semi-theme is humanity as Mari regains her humanity and Stag Beetle donnage retains his humanity up to the end.

Overall comments: I believe Sogna had a serious failure with this game. Moreover, I think that Sogna made wrong conclusions from such failure. As it looks to me now, instead of producing more serious stories it decided to leave stories at a bakage level, but add cuteness instead. But I will only know for sure after I play Viper-GTB. 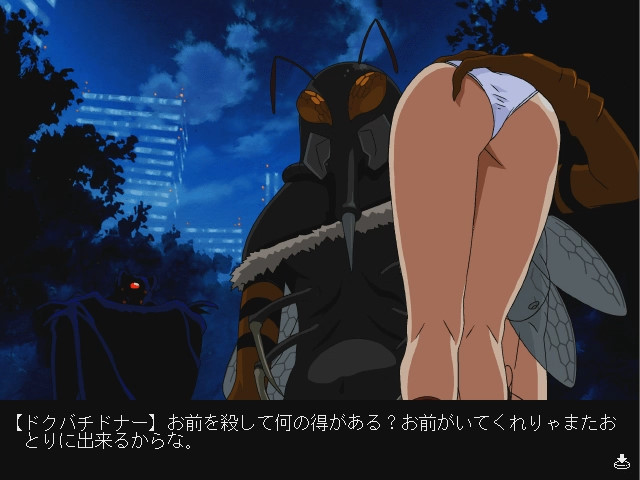 Man what a mess up villain, use the appearance of your dead brother to do R18 thing to you!