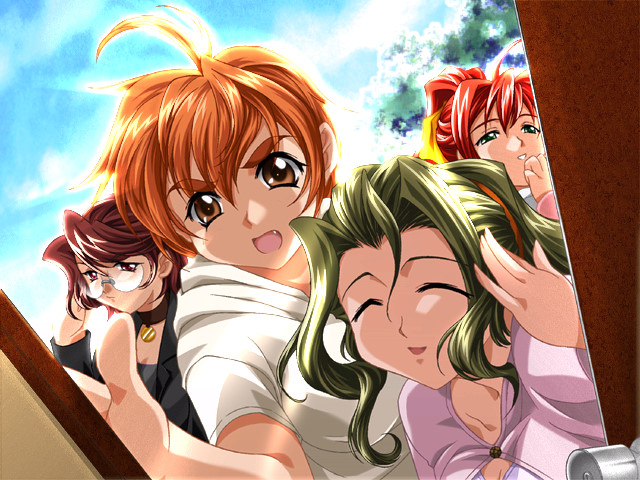 Title: Age Maniax ~Isumi Yon Shimai Saigo no Hi~
Developer: Age
Date: 2000-06-03
VNDB link: https://vndb.org/v444
Youtube walkthrough: https://www.youtube.com/watch?v=c74f8Wn4sRw
Synopsis: One day protagonist meets with four sisters, who due to certain events starts living in his house. But he has to go to Europe to follow a story, and they decide to go together with him. They make reservations in an old castle which had reports of a princess' ghost, a legendary wolf, a lake monster and a crashed UFO surrounding it. And this is not even the beginning of the events to unfold around the sisters ..
Structure: Game is roughly divided into four parts : prologue town, hotel, train, epilogue town.
Length: Took me five and a half hours to finish one playthrough.
Game type: Crossover bakage not only between Age titles, but with titles of other five companies
Difficulty: Easy since it's royal road, but as you can give preference only to one heroine at a time, couple more playthroughs will be needed to watch all CG 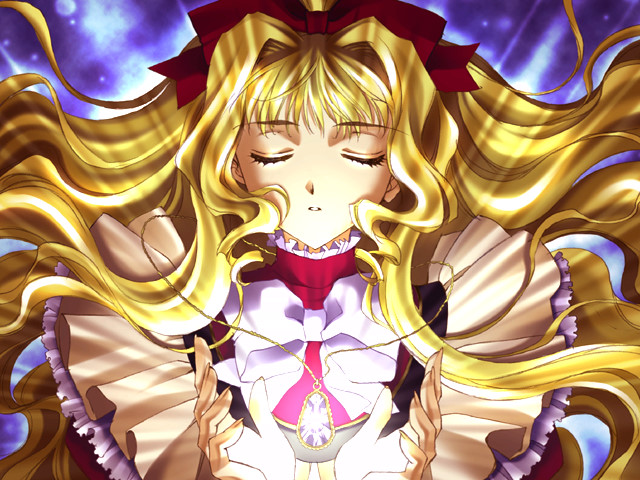 Character Design rating: 10/10
Protagonist rating: 8/10
Story rating: 5/10
Game quality: 9/10
Overall rating: 8/10
Rating comments: I just can't ever rate bakage highly, and there are very few of them that I can call masterpieces. This is exactly that case. Crossover type has a lot of benefits - all the great characters from previous games are used, there are lots of cool ways to tie incompatible features from different games together, and there's no real need to bother for the story much. The whole first part of the game I was even rating the game as 9/10.


Protagonist: Masaki is not your usual high school boy. Instead, he's a grown-up who lives alone and works as a photographer while being a fan of super rangers franchise in his free time. But his personality is quite usual - reserved, kind, but reliable. We don't get to see his face, but he projects a solid impression. 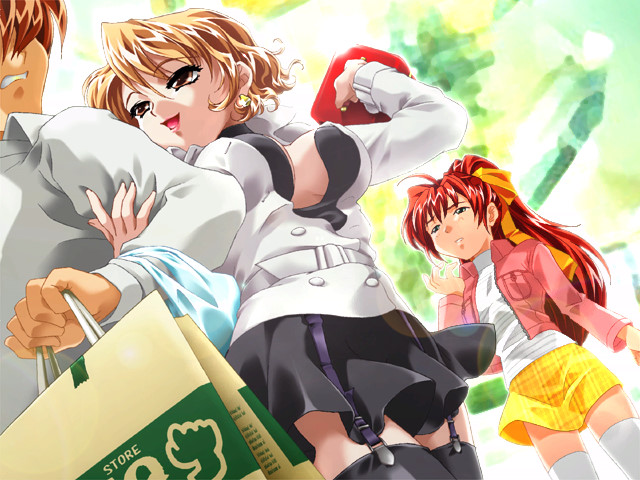 Characters: Basically we jump through different games like mad, but Kimi ga Ita Kisetsu heroines accompany us all the way, so we can pay additional attention to one of three girls and get extra CG related to her on the way. But don't get me wrong, there are no main heroines here, and it's totally ok not to chase anyone and just follow the story normally. Shouko from Rasen Kairou also accompanies us the whole way, but she's here for the plot purposes, she sees her role to explain all the mysteries happening around in a scientific or logical manner. Charlotte from "D" plays quite an important role and remains the most mysterious character. Kaseki no Uta maids and their master Welka are important only for hotel part and somehow important for train part.

Story: After the whole band bursts into Masaki house there's not much time to lose, it's already known that Masaki is going to some Europe town for a photo mystery tour, and the girls decide to go together with him. The whole prologue is basically preparation for the trip. Now the glimpse of madness that's going on in the game - photographer Masaki forgets his camera while going on a photo sightseeing trip... Anyway, they are greeted by maids and led to the mansion. There's a number of mysterious legends that they listen to there, and actually get to see each one with their own eyes. Then all the characters are... let's say forced... to leave the mansion and as another twist of absurdity have no better plans than to board the Magic Arrow mysterious train. There's more exploration  and action in this part, and after facing some danger everyone gets home. Basically that's a very rough carcass. There is also mystery and intrigue as some forces set a conspiracy and are interrupted multiple times on their journey. There's a nice resolution of the conspiracy in epilogue in bakage manner.

CG: Have zero complaints. Loving CARNELIAN with all my heart. 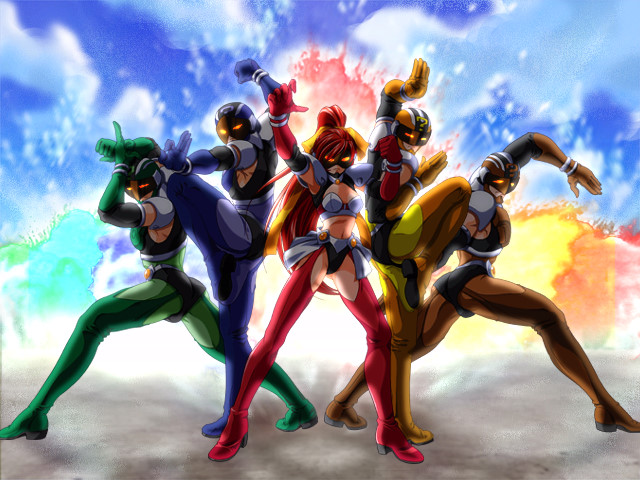 Sound: Almost all the female characters are voiced. Only some guest star heroines from the other games aren't voiced (like Aries), there's probably very good reasons for that. BGM is marvelous. My only tiny complaint that sound volumes aren't customizable, and BGM sometimes sounded loud and speech not so loud.


Title and Themes:  Here I'd like to talk about appearance of Ein and Drei from Phantom of Inferno. I'm quite sure it was difficult to use them due to copyright issues, but on top of that it was a difficult task not to belittle famous heroines from a serious games with the bakage jokes. And that task was accomplished 100%. They both appear three times and with the same cool phrases that look very funny at different situations. Ein usually appears when hero is searching someone crying out that person's name. Then appears Ein : "Don't call me by that name. I'm Ein, since old days till now. You are Zwei, my second half". And it's very funny when Masaki just says "Sorry, wrong person" and goes past. Drei always appears at high pitch moments with her phrase "That's the guy who made me a woman. What do you thing he's doing in America. He's a killer." And then scene goes on. That's pretty hilarious each time. They just come to the scene with their cool phrase and the music changes to a special sad one, and then they disappear, and it's normal music again. Those moments really make up for the atmosphere. Couple times Ein and Drei also said some phrase relevant to the current situation in the game, was not something special though.
Another cool theme in the game is power rangers. It starts as just a childish hobby of Masaki, but ends up a huge thing. 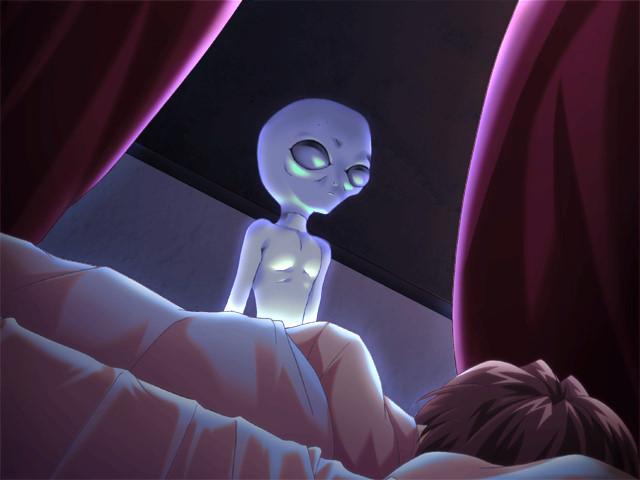 Humor: There's so much of very different humor which is a great relief after Kimi ga Ita Kisetsu boobs size constant repeats (in Age Maniax there is just one single joke on the matter). Most of jokes are built on absurd situations. Can't remember good stand-alone ones right now.

Overall comments: Age Maniax has great pace, great absurd humor and links to lots of different games from 0verflow, TopCat, Nitroplus, Circus, Abogado Powers and one superhero game I do not know. It not only managed to show that Fandisks can be fun if made properly as crossovers (the first visual novel crossover, actually), but it also managed to unite so many different games together. I consider it to be a very important game from historical point of view. It's also a good entertainment that relies heavily on the games from that era. Unfortunately, nowadays players do not know anything about the referenced games (except for Phantom of Inferno, probably), and that deprives the game of a huge chunk of its charm. 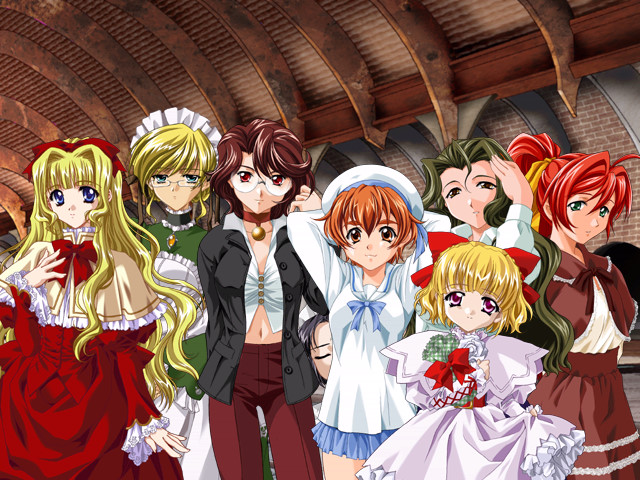