This game has a good spoilerless review (1) and several mentions on reddit (2 3 4 5) that all claim the game to be a "legendary" eroge renowned for its metafiction-heavy plot" "sometimes seen as a predecessor to games like Ever17" and to have "exciting plot", "saddest and most beautiful H-scene" resulting in being "emotional during reading it". So my only question at this point is "ARE YOU FREAKING BLIND, PEOPLE?!" 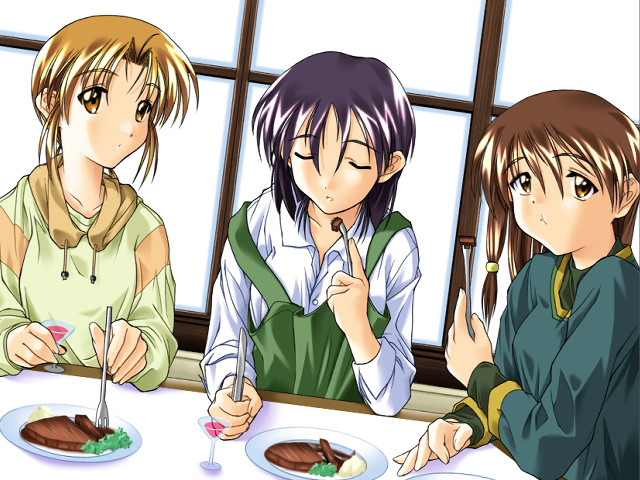 Game is ridiculously boring and has NO appeal points besides quirky composition. Composition is ok since there are two stories plus some kind of diary. First it's needed to reach main endings in both of stories, then diary entries get revealed one by one, and finally you need to return to both stories and see the rest of opened endings. Now for the disadvantages:

This review would be much milder if the reviews weren't so obnoxiously praising. It's not a bad game if you like mystery games with complex structure. There was never with so complex structure before, so it's a great example for all future ambitious games. But trying to compare Shoin with Ever17 is comparing an inventive doujin-ish B class game with an AAA title, totally unfair. Shoin can be called a girigiri masterpiece only because it brings new features, but not because it's an organic amusing game.

>So my only question at this point is "ARE YOU FREAKING BLIND, PEOPLE?!"
It's funny how you are one to talk.
Just a little question for you - what do you think is the main twist in the VN and what is "4rd love" about?

Should the fact of two created in his consciousness worlds startle me? Or the fact of what he did to his lover? I'm happy you fall for that, but have some respect for opinions that don't coincide with yours.
Why should I even comment on 2nd love if I never reviewed it? I'm not asking you about Wasuremono to Otoshimono, right? If you have something to say, please write an article. Stalking other people's threads as anonymous with all your poison is a jerk behavior.