Foreword: Yatohime Zankikou has an absolutely starry staff, great chuni story, astonishing visuals and lots of fighting girls. Everything promises the ultimate score, but why average scores are just between 7 and 8 then? 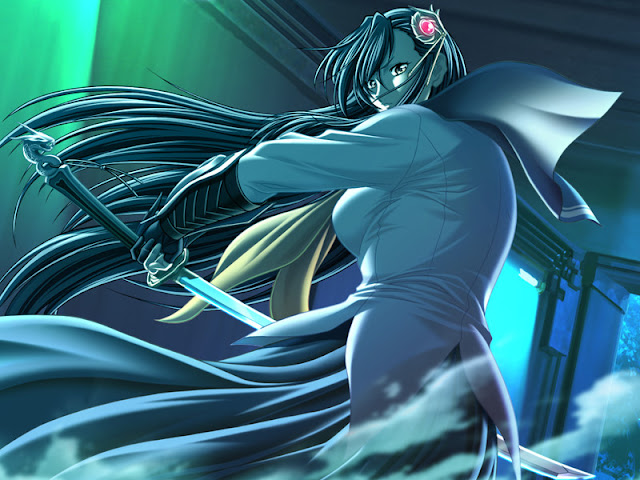 Synopsis: A god called Yatonokami who is worshiped by men is now sleeping. Or is he? Somewhere, somewhat, something arose and its manifestations are possessing people and turning them into 'oni'...
You're Nagamine Yuuma, an ordinary student, the one who is woken up by his cute female neighbor friend every morning...
But in truth Yuuma isn't really a normal guy, his body has the power to produce electricity (that he only has some limited control), which made him considered as freak for most of his life. He moved in a new town 3 years ago though, and now he is enjoying that new life a lot, because at last he found friends who aren't bothered by his 'abnormality' -- in fact, his neighbor Sakurako has an obvious crush on him. But he also has weird dreams about... being someone else... 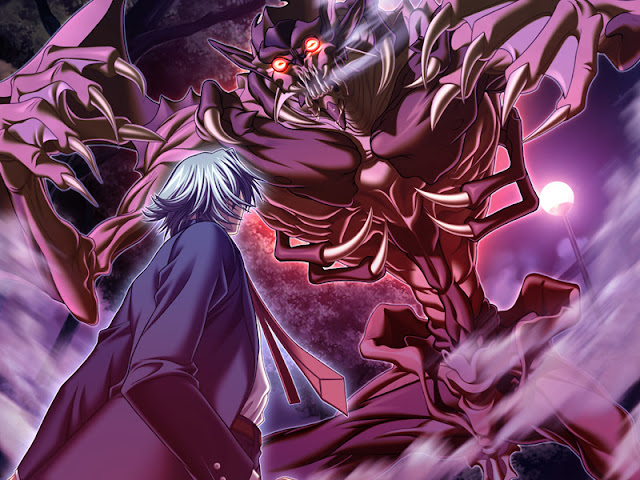 That's one of the weirdest scores splits that I set.  Game is of great quality made by all the canons of the genre. But nothing really touched me here. 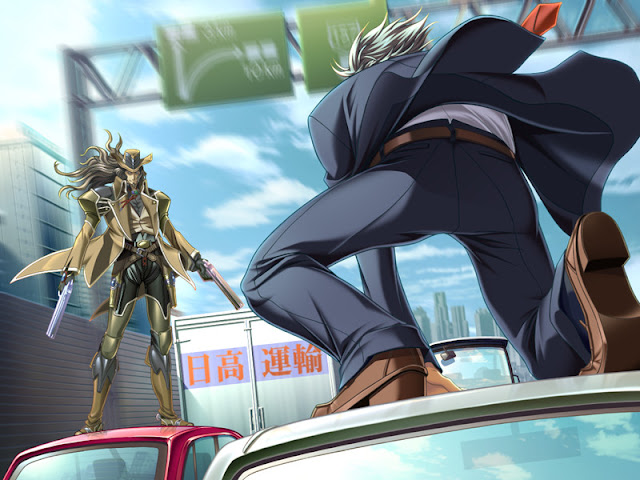 First about the advantages. There's a huge number of CGs. There is no shortage of cool and charismatic characters. Everyone but protagonist is voiced. Battles are full of special effects. The last, but not the least, heroines show a lot of sex appeal, especially Tou that almost comes to the level of Cala from Viper RSR. Girls have very long and varied individual routes each written by different authors. 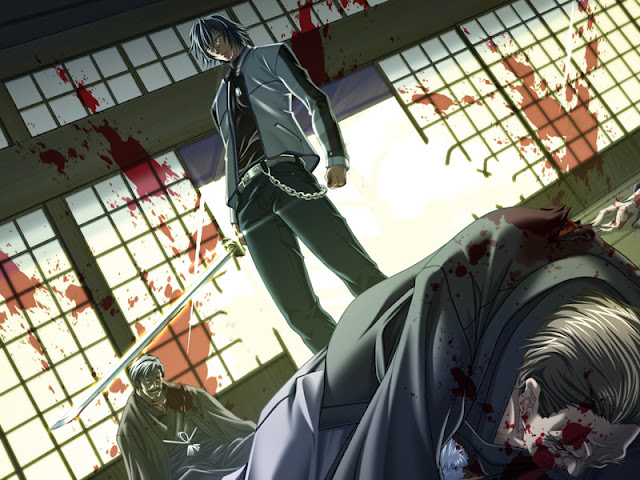 As for the shortcomings, let's start with the story, as usual. It's a normal school chuni, but with events actually unwind really fast. We get attacked by a huge monster very early and saved by Tou. The next day there's a new monster attack, and this time it's Tsukiko turn to save us. But Tou shows up as well, so they have a clash. Yuuma electricity ability gets known, so Towa moves to his class to observe him closely. Then the priestess with her pets shows up, followed by evil spirit attack etc... What I hated the most in all this mess is that nothing is explained. There's no firm backstory, no build-up. Right away random action events get thrown in your face. A huge number of characters with special abilities show up one after another with no time to digest anything. And when I think it's time to shed some light to this or that character, just more extravagant characters get thrown into the mix constantly. There's no time to really create affection for characters. Only in the middle of individual heroine routes we're shown the mad scientist and the shady figure that seem to be experimenting by sending these monsters, but nothing complex at all. Story does not really try to go deeper and develops only externally. There is some explanation given later, but pretty unsatisfactory one. 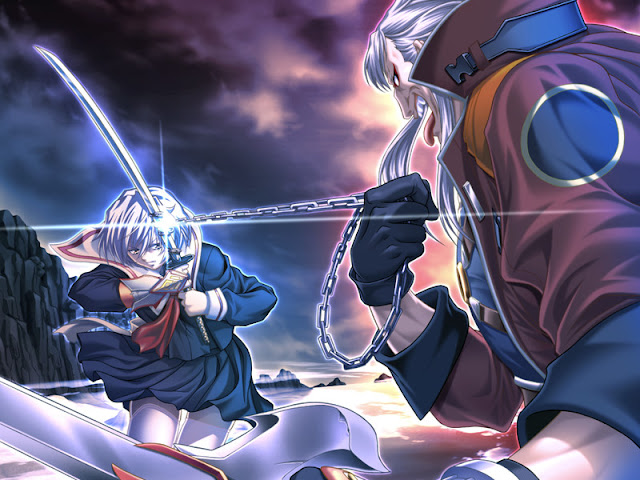 The protagonist. He seems like a normal guy, but I absolutely hate him for the passiveness and blandness. He does not really have anything but his electricity trick. He can't defeat even a single weak monster alone. But every girl gets to love him instantly - because there's no time to spare here! He sparks electricity which is a sign of ancient great ayakashi power, so let's try to stay close to him. That's all the explanation we get. 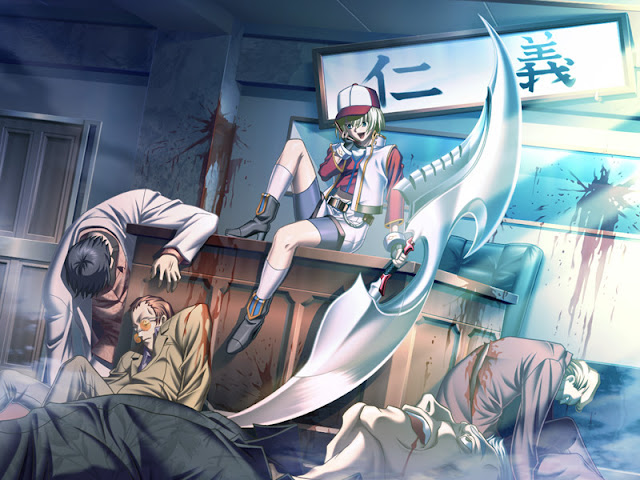 Heroines... We have one standard genki red-haired childhood friend Sakurako, a massive samurai tsundere (sic!) Tou, a quiet serious shinobu Tsukiko and side-heroine Hainrike who is a European girl who travels together with Loup-Garou. There are actually also short branches for priestess Himiko, Ayana, Yuika, but I did not care enough to record those as well since they basically are considered bad endings. When Tou blushes I'm ready to fall beneath the earth from shame... it's so lame. There's absolutely not enough time for the heroines. It's not enough that they basically all love Yuuma from the start. The whole bonding equals Yuuma just coming in during girl masturbation as a rule. Super convenient and super stupid. Girl endings failed to impress me. Tou/Tsukiko endings are almost the same since they are similar-background main heroines. Other heroines endings are ok at best. 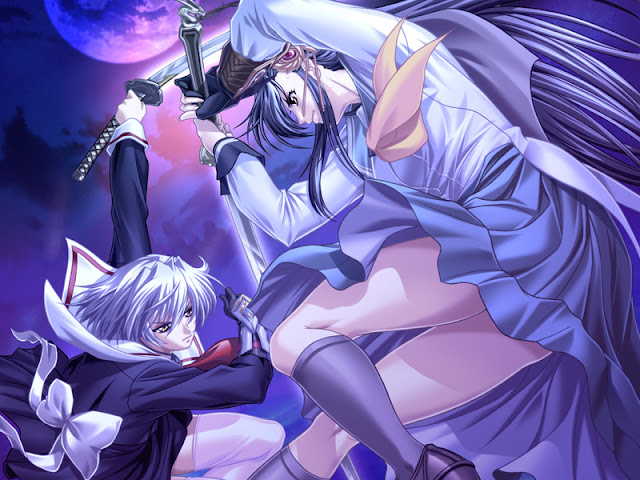 Actual fights. They are so unreasonably long that it looked to me like boxing rounds. Some clash, then constant exchange of dialogue lines, then some clash again... and a lot of rounds this way. And the saddest thing is that dialogue lines are used in an absolutely stupid manner. We get to know nothing new. Heroines do not try to understand the other party motivation and personality. First fight - then talk. It's the rule everyone follows. And there are so many CG that they get to be used really wastefully. Like there are CG just for couple seconds scenes without dialogue lines. 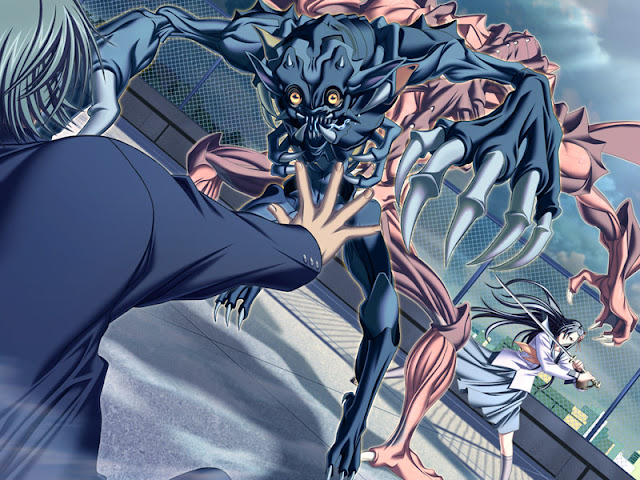 In conclusion, Yatohime Zankikou is still a masterpiece, but of the most hated genre by me - Shounen. Shallow characters and themes deprive the game of the adult atmosphere turning it into a tasteless show of prowess. Seven is the absolute top score this game deserves, polarization can be only downwards. And that's very sad, there were all the chances to get the ultimate masterpiece. If Yatohime Zankikou saw light in 2004, I'd have very few questions, but this very theme was explored in Ayakashibito and Ayakashi with much more depth let alone other great serious masterpieces showing up in 2005. I need a real deal, not something done just for show. 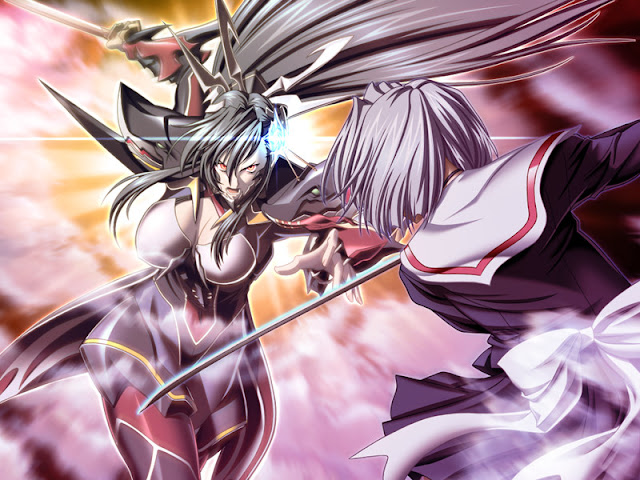 So, the VN isn't very good then? Hope to hear from you soon.

Not a good game. It only looks cool with constant battles going on and on, but fails with characters and story.

I see, so not recommended for anyone?

Don't want to recommend this game to anyone. There are enough better games to never remember about this one.