Foreword: Game interested me mostly as supposed sequel of Abandoner. 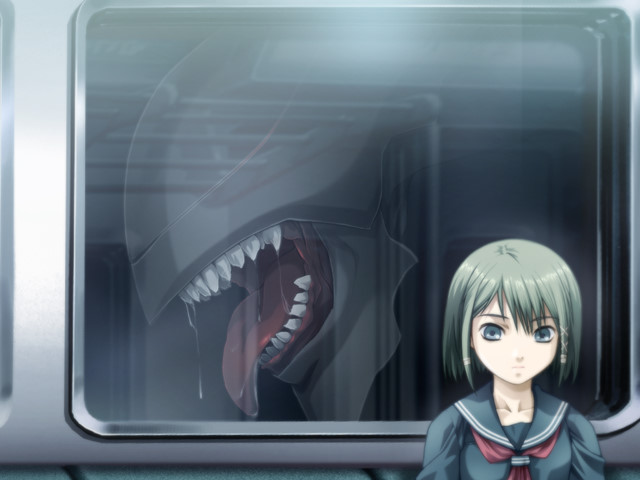 Synopsis: After disaster in 2024, seven years ago rain has never stopped in this city.
As of recent, nightly serial killings have infused fear in human hearts.
Injured by monster attack and dying, student Shouji meets girl Ai who binds a contact with him and gives him power to use mighty claw in battle.
They promise each other to survive no matter what, but it might be the first step to brighter future for the humanity. 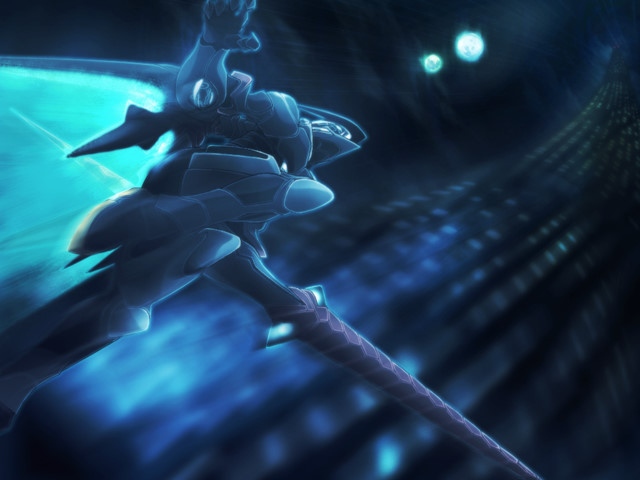 That's a big split in scores. I have zero issues with the quality - everyone is voiced, character designs and CG are superb, mini-game is spectacular. Stage is fantastic, heroines are very nice, and heroes are cool. So what can be wrong in this game? I read Japanese reviews only after I finished the game and formed own impression, but all reviews share the same thought. The ingredients are great, but they are poorly cooked. I'll try to formulate what's wrong with Lost Child. 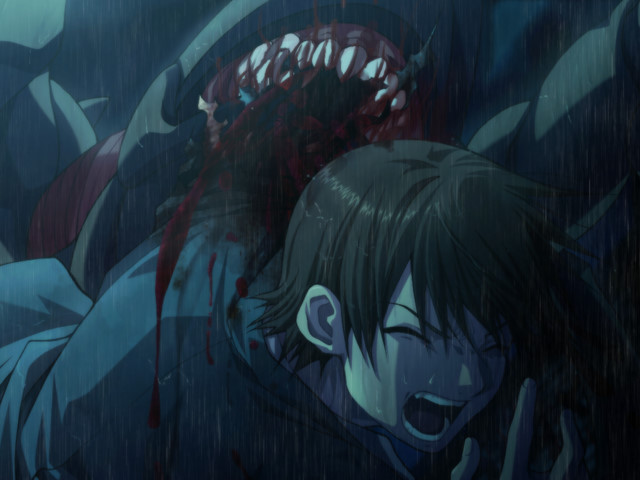 First, Shouji can hardly be called main character. This game actually has four pairs of protagonists - each boy needs a girl to transform and fight in the robot form. And Shouji is just given a bit more play time since he is our usual high school student without special abilities. He almost dies, gets saved by Ai and learns to fight in the new form while living with girl Ai who has a very blunt attitude. Other three male lead characters have much cooler backgrounds and more vivid personalities, but they appear so randomly on the screen that it creates a lot of confusion. And these four pairs co-exist simultaneously, so it feels pretty weird when in one episode all four pairs face some disaster or bonding even resulting in intimacy. Feels weird. 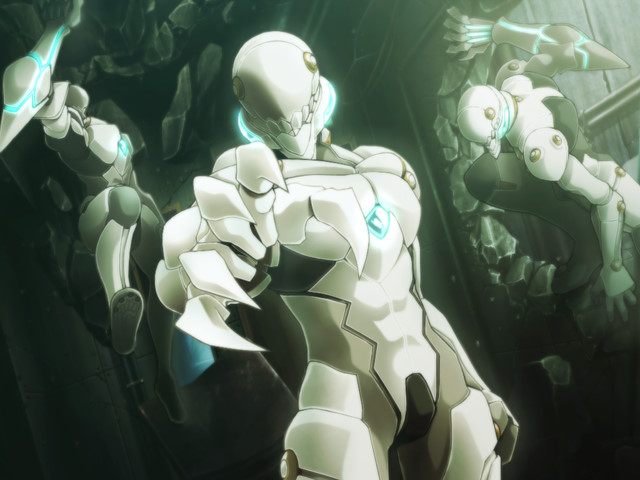 Secondly, each of four lead male characters has girl partner. And links between them is probably the most interesting thing to explore here. And these relations are indeed touching, but they are only scrapped in the course of the game. There are six sub-episodes that are devoted solely to these links, but it's quite stupid to rip it off the game itself. 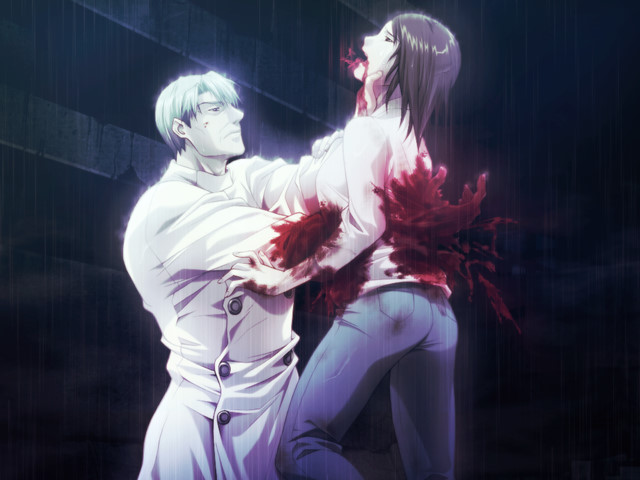 The third reason is that there is a huge number of sub-characters in addition to main 8 ones. And some of sub-characters are very nice easily deserving own sub-route or at least some kind of development. I really feel bad for abandoning so many great heroines midway. 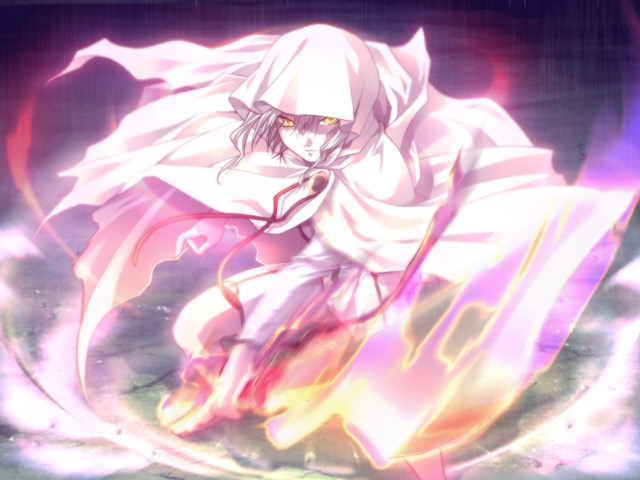 Fourth reason is action tilt of the game. The fighting mini-game is not too bothersome (at least on easiest difficulty), but this fighting determines the flow of the game. We constantly need to fight someone with our four robot units, so we need to have lots of opportunities for fighting. And the first half of the game is really random - some monsters start to show up and attack civilians, so we just fight these monsters whenever we meet them. And protagonists also have some fights between themselves. And only in the 6th episode we kind of spot the main antagonist, and monsters swap with other robots. 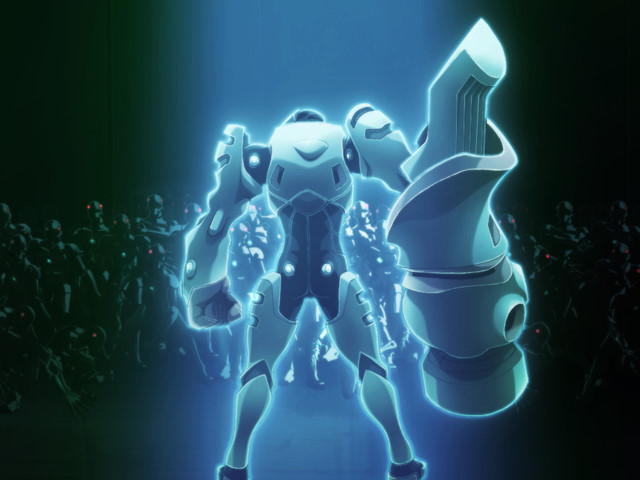 The result is disastrous. Very confusing first half of the game and very uneven and forced second part of the game. Game was initially scheduled to be released in 2004, so you can figure how torturing it was to gather all these elements by different people over two years time to get a finished product. But game is still a masterpiece for me, because in addition to overwhelming production values game managed to deliver some touching moments by the end of the game. And six sub-episodes partly satisfy the need to see relationships development of four pairs. It was really sad to see that the only connection between Abandoner and Lost Child is the same world and the links to tragedy in Abandoner. No Neil Fox this time, a pity. 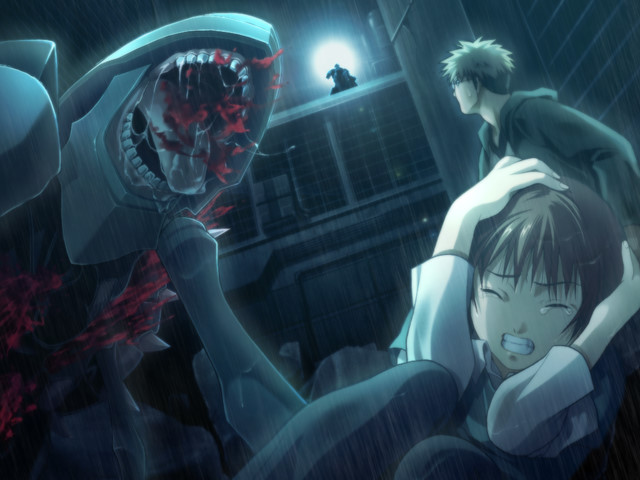 I believe that Lost Child made a mistake by building the game around action fights which had a great negative impact on the game composition. If only Lost Child was divided into four different protagonist stories like I/O, and then four stories got linked by the True Route, it would be a full 10/10 score and masterpiece remembered in times. But such structure could hardly be imagined in 2004, and with all production cycles hampered it was too late to make serious changes, so we got what we got. It's still a great game to reread and follow charming characters instead of falling for less than exciting main plot. 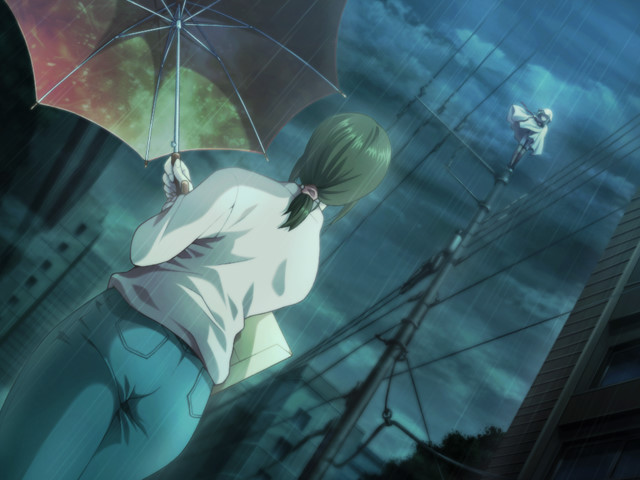