Foreword: Could not miss probably the best game in the series. All conceptual things are given in a different review (1), so I'll slack with just an impression. 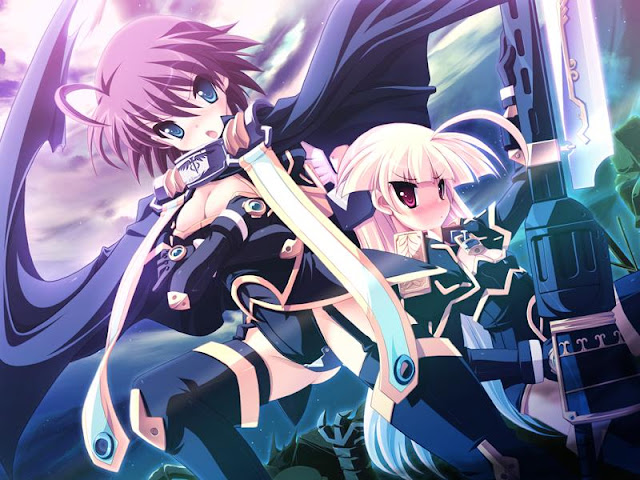 Synopsis:
There are two different worlds... They are quite similar, but conflicting with each other. One of the world is called the World of White Silver that exists independently. However, the other world coexists with other worlds, closely affecting each other. People of these worlds hate to be invaded by others. And this power invites another chaos...
Youtube: https://www.youtube.com/playlist?list=PLs4Gp5VU4Fv_krD6OdwnhHB-nWGXn6p2t 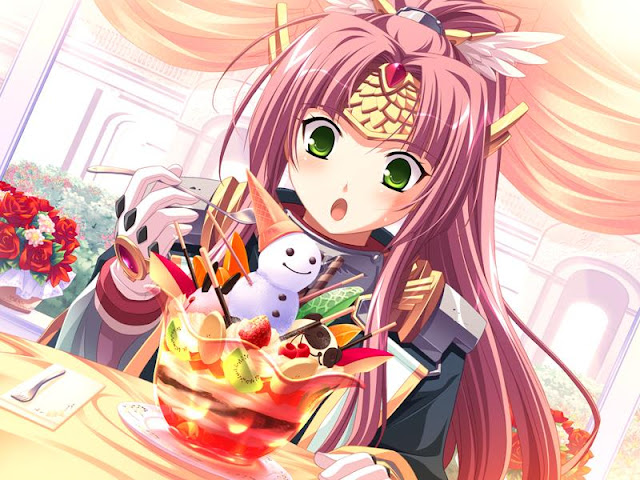 To explain score split I need to return to Shirogane review. I disliked protagonist, unnatural romance, harem relations, focus on ero, obsession with loli heroines there. And now imagine that all that is fixed in the second game without adding new flaws. And that in short is why I'm so excited about Gouen no Soleil. 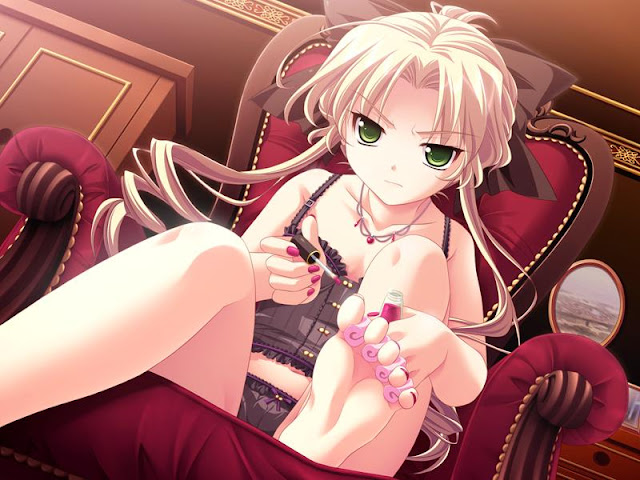 Even worldview is better. It used to be pretty much usual world with school, childhood friend, older sister teacher and all that boring stuff while gradually trying to become powerful enough to oppose berserks. This time only very start happens at school, then strange girl comes to school with a humanized toad, and they teleport protagonist to a different world - world of chaos - in sister's body. So first of all all the conventional life ties get torn, plus chaotic nature of this world promises a lot of excitement. 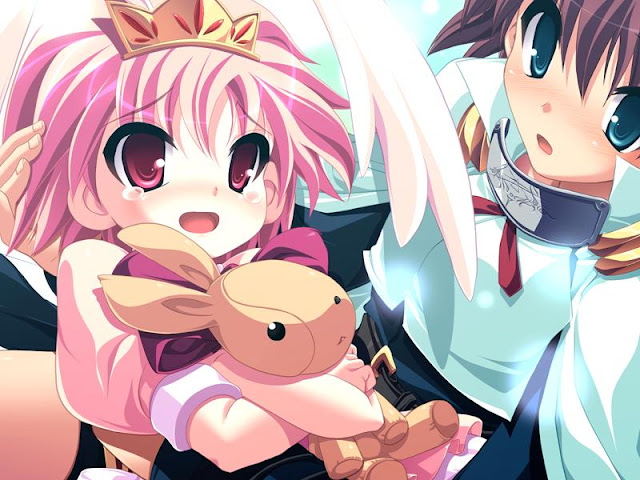 And excitement we get. There are some outstanding characters and scenes including battles to encounter in this world, but everyday scenes still take the bulk of time. And what game really excels at is everyday scenes. Most of them happen in a mansion with all cliche attributes - sadist blonde mistress, butler and maids. Tempo is really good, and humor is everywhere, even in battle scenes. There's not a grain of boredom in this game, unless you play for the second time for a different heroine since many scenes are shared due to limit of two route branches. 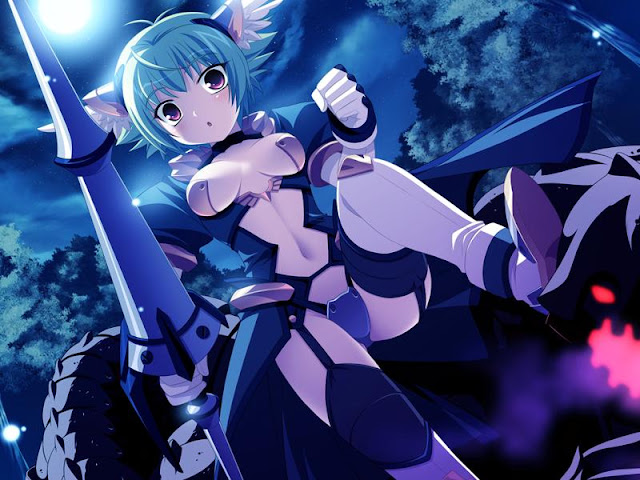 Let's say couple words about characters. There's no centerpiece heroine like Hagar this time, but heroines are nice and varied. It was strange to see both of maids get their endings, but maids personalities are also distinctive. Even Rin does not look like a loli most of the time, to my relief. As for protagonist, he/she is surprisingly decent as he/she familiarizes with this new world pretty fast. Most of the time protagonist spends time as a girl, and that girl has a face, so we don't associate ourselves with her, and it allows to skip all the horny-ness altogether, let alone think about harem. Apart of repeating masturbation scene in the bathroom there is hardly any cliche trap/body transfer moves. Finally we can focus on the story and heroines without persistent goal to get them in bed. H scenes are mostly focused in boss battles after defeat, so I absolutely did not feel any irritation with them. There are no those weird zooms, camera moves in H events from Shirogane, and length is short. Oh, should also mention that I've no complaints with art. I wish other Soleil  games had the same style as Gouen. 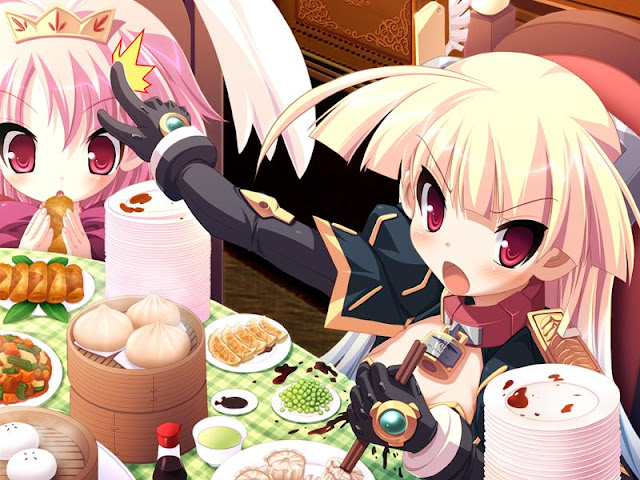 But what I describe looks very much like perfect 10/10 score. So what kind of flaws do I nitpick over this time? Well, setting is indeed chaotic, and it does not bother to give proper explanations to the reader. But there is another technical flaw - number of CG. The total number is 74 with variations which diverges from common case of around 100 CG. I don't really care that there are only 1 or 2 HCG per scene, but game would really benefit form normal battle CG. As of now, all battles happen in text dialogue mode with some rare slashing effects laid upon character sprites. Heck, I barely scratched enough CG for this review. Oh, well, and I believe that perfect 10/10 visual novels should be serious stories. And given all the moe and comedy tilt I just can't call Gouen no Soleil a serious story. 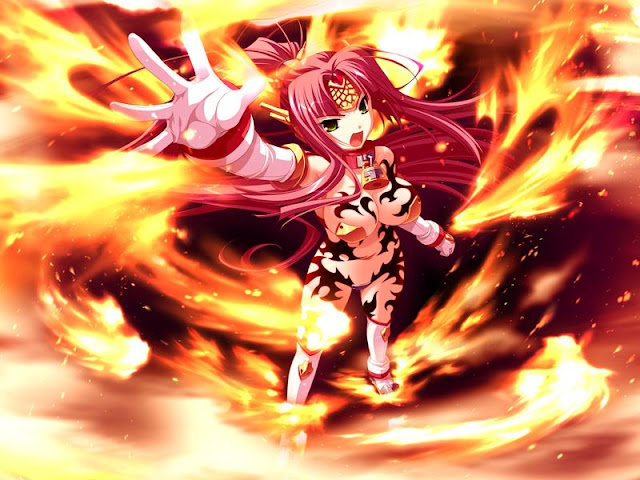 What we get in the end is a surprisingly appealing mix of genres. I'm weak to games relating in metafiction, and this time there aren't only references to Shirogane no Soleil, but also to Harukazedori ni, Tomarigi o let alone references to future games. I still intend to skip Skyfish SOL games, but perfectionist in me realizes how satisfying it is to unwind such complex web of ties in each game. 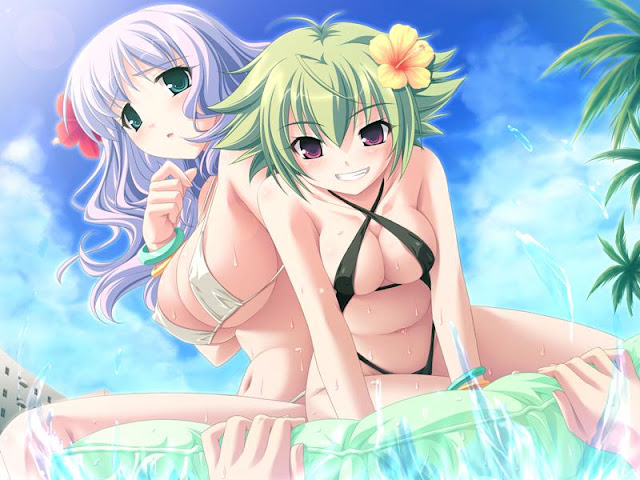