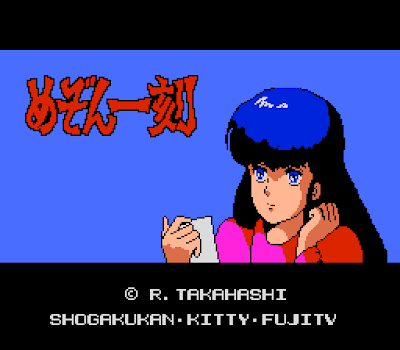 Did you hear anything about Maison Ikkoku? Well, you must have. It had a huge impact on anime and manga of 1980s. It produced manga and 96-episode anime series, three live action films, anime film and 3 anime OVAs as well as this particular game in 1986. It's actually very sad that such ~100 episodes format slice of life warm comedies have not survived to our days. All the modern longterm on-goings are just shounens for kids.


Maison Ikkoku ~Omoide no Photograph~ is an original story based on this series featuring a story that could easily become 97th episode of tv series. If you watched even one work of Maison Ikkoku, you'd know already that first of all it's a humorous one. Main hero is a 20-year-old college applicant Godai. He failed college exams and took a year in order to prepare and enter a good college, not a crappy one. He is very limited in money so has to rent a room in a boarding house. The house is full of all kind of weirdos - barely clothed hostess Akemi, peeping tom and master of pranks Yotsuya and chatterbox and gossip-house middleage granny Ichinose and there are also dozens of situational characters. Kyoko Otonashi is kind and sincere woman who gets a job of being house intendant after the running of previous one. So the main themes of the works is Gosai's shy love towards Kyoko and the everyday carnival that the inhabitants set up.

What? I just returned the girl her bra that I found! Accidentally!

The game brings this formula to its extreme though. You start the game as Gosai with 4820 yen and a strong desire to know what's depicted on the framed photo in Kyoko's room. That's the whole game. How difficult can it be? Well, it took me 5 hours. You actually manage to infiltrate her room and approach the photo for some 8 times (I've lost count, actually), but in the last moment something happens and you're forced to leave. Sometimes, new opportunities open up after that. Eventually Gosai gives up on infiltrations and gathers old photos of all inhabitants in order to push Kyoko to show her secret photo voluntary and it works. And since it's an Interactive Adventure, you get to examine everything and talk with anyone. And outcomes are fun most of the times. Game would rarely just say it's a ladder, but rather give Gosai's commentary on the matter. So, game is truly great, right? Not really. 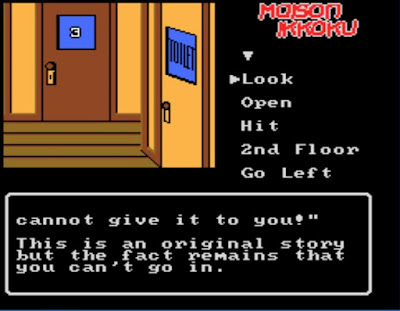 Game often breaks the 4th wall and this particular joke about room 3 running through all the series.

Retrogames exist to torture players and this one isn't an exception. Let's start with something simple. Turbograft 16 version that I used did not have normal saves, but at any time you could go to the bathroom to see the hashed code of some 70 symbols that depicts your current progress and in order to "load" this game you need to print those 70 symbols... and not with a keyboard, but a joystick (virtual keyboard). Well, that's nothing compared to game mechanics. Basically, after each noticeable event (like room infiltration) all the inhabitants moods reset to angry at you. Yotsuya would lock you on the roofs and porches (which is an immediate gameover since you break legs trying to jump down). Akemi would hang around the bar preventing you from taking free booze and money loan from bartender. Ichinose... would pester you at every location in house Ikoku till you bribe her with food or booze. And this has to be done every time that you go to see Keyko's room... and in many many other cases. The main problem that you need to spend money on everything (even to phone someone) and you don't have money sources. You have those 4820 yen at the beginning and can take two loans - of 2000 yen and 3000 yen and you earth 5000 for tutorship later on. Just in order to get to Keyko's room EACH TIME you need to bribe Ichinose with ramen - 120 yen - and sometimes booze - 2000 yen and Keyko with flowers - 1000 yen. And there are lots of non-regular expenses and bribes. For example, mandatory for completion maneki neko figurine costs 5000 yen. That's why I'd call this game simulator of student's life. You need to count every yen, use all the possible ways to get the items for free and for discounted price, pester your parents about bringing you food not make mistakes at all! Every mistake and you'd need to enter 70 symbol hash code again or it might actually be faster to start over. I praise emulator for ability to save game state.

So, you just need to save a lot and follow a walkthrough, right? Na-ah. Inhabitants of house Ikoku move around the house and are often not home and you need to trigger event to pass time - the only way I've found is to bribe one of inhabitant and get into his room - then time passes. There's a lot of stuff that we can't really influence - like bar granddad whose presence does not let you get free booze and loan. He is supposed to be out when you bribe Akemi... but he's almost always there in the bar and all you can do is pass time with events and try again later (then you'd need to bribe Akemi again, of course, and for that you'd need to bribe the ever-sticking Ichinose - you know the drill). Now I get it why there is English translation made in 2008 and all the reviews I found are based on old japanese versions.

Game is still fun and addictive, but mechanics is the cornerstone that did not let me really enjoy such a great game. Since I've got a habbit of giving out scores - I score it as 7/10 - my special score reserved for occasions when I actually cherished the experience but I'd not recommend it since you probably would not like it.