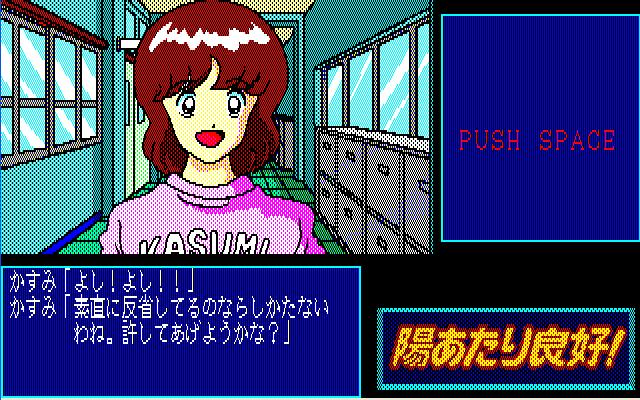 The number of visual novels in 1987 increased greatly, but the number of masterpieces is relatively the same:
1. Amazons no Hihou
2. Urusei Yatsura
3. DNA
4. Koroshi no Dress
5. Hadou no Hyouteki
6. Jesus
7. Nakayama Miho no Tokimeki High School
8. Hiatari Ryoukou!
9. The 4th Unit


1987 has become a great breakthrough for visual novels. Text parser has been made obsolete by command selection and quite many games that amplify text over gameplay or graphics have showed up (even though the graphics have evolutioned immensely as well). But the most innovative and engaging game of 1987 is Hiatari Ryoukou adapted from anime by Toho. That's the first galge in modern sense - it's about daily routine and chasing one of the girls with lots of sunshine and comedy scenes. The charm of characters is overwhelming and gameplay is quite easy and infectious. If only it could be hooked...