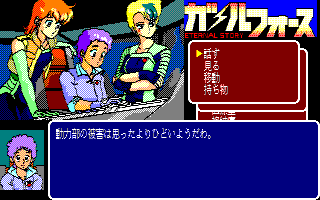 There's actually a harsh competition here, but no obvious winner at the same time. I don't want to nominate NES titles, because this platform is not really suitable for the genre. Maison Ikkoku was nominated by me previously, but in the long run it's a NES game again and it's not particularly entertaining. Wingman 2 and Little Princess are way too short. J.B.Harold is a detective genre that I can't stand. Casablanca does not have a normal release. Boukenshatachi is mostly a parody with some jokes difficult to understand already and text parser ruins it all. But I was really shocked by production values of Gall Force - Eternal Story. It has pure command selection gameplay, really nice dialogues, lots of CG and plenty of action scenes as well as worthy sound support. That's what VNs should be like and that's why it's the VN f the Year 1986!

Just FYI, Star Trap is based on the classic Cream Lemon H OVA series, so it's a tad unfair to call it just an eroge.

Oh man you weren't kidding when you said there's a lot of coverage of Murder Club! Not sure what's so great about it personally. I mean it's ok, I guess.