Foreword: Fairytale is the main experimentation company of the early 1990s. And Shinjuku Monogatari is an attempt to go away from adult games for the sake of games that can keep the interest by the story and atmosphere alone. The history shows us now that it was a failure attempt from the start since adult titles with cute heroines are everything the populus wants. But was Fairytale really wrong in that intention? 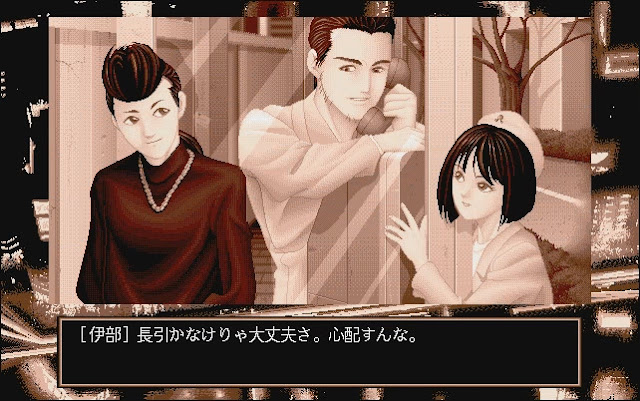 Synopsis: Ibuki inherited an antique store, but to survive he takes side jobs as well. One day his frequent client Akemi offers him a job to fake kidnapping of a high school girl Megumi Naruyama, the only heir of Naruyama Real Estate group. Megimi herself is the initiator of the kidnapping. Since the pay is good - a million yen - Ibuki takes his younger partner Shinji and gets to the school gates.
But Megumi's uncle Sakai has own plans for Megumi and he sets a yakuza gang on the children trail.

Rating comments: This is an experimental Fairytale work. It's a very realistic story about youth rebel state of mind. All the heroes of the game are as if drawn from modern life, just with weird haircuts. I'm probably too old to appreciate the values of youth independence, but overall it could easily be Douglas Coupland novel for those qualities. Overall it's an enjoyable piece of work, just only two hours long and I can't possibly rate a short game any higher. 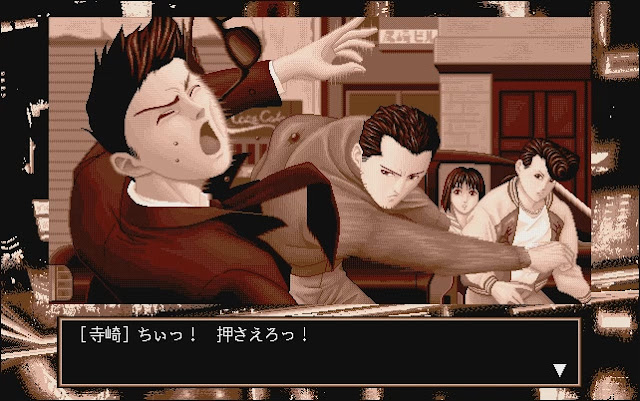 Protagonist: Ibuki is a peculiar protagonist in that he is an orphan and he takes care of the antique store with his sister. He takes on different kinds on jobs and that's why has quite a net of informants around him. 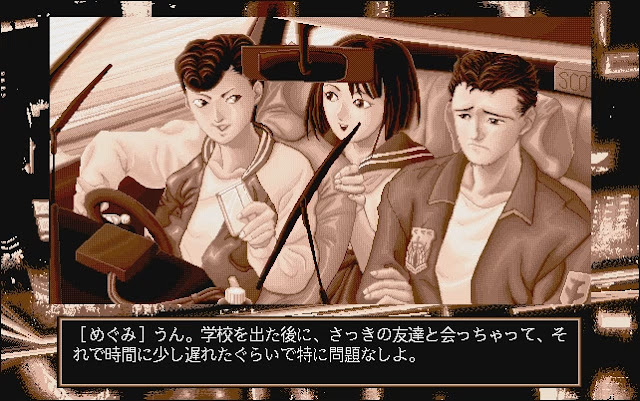 Characters: Shinji is the younger partner of Ibuki and he's not the smartest kid. He wears an "Elvis" hairstyle and is there for support mostly. Megumi is the main heroine and she's one rich family spoilt brat. Her character is good, but she's sick of adults and she thinks that all the adults in her surrounding are liars and two-faced. She lost her mother long ago and her father took another wife. A month ago the father died at Chicago at very strange circumstances reported as an incident. Megimi's uncle Sakai took care of the company affairs. Megumi hates both her stepmother and her uncle. She orders her kidnapping on a whim - just to get a week vacation from the false adults around her. And the whole story is about her growing up and coming to terms with her past and the adults.

Story: The story is not the most important part of this game since it's a novel about growing up. The dialogues and thoughts are the focus here, so I guess I can tell the most of the story without much fear of spoilering. Ibuki and Shinji successfully kidnap Megumi and she plans the week of her vacations ahead - shopping, amusement park and then going somewhere far away from Tokyo. She's a rich one, so she easily buys a new Jaguar car for boys costing 13 million yen as well as new dresses. But partly she just wants attention, especially from her stepmother who is very distant from her since the company president death. So she instructs the boys to telephone to the company and demand a ransom so that her stepmother delivered it next day evening. But instead the next day noon children are assaulted by her uncle Sakai with his thugs. Boys just need the payment, so they are eager to exchange, but Megumi refuses to return categorically and they manage to run away together on a car. Ibuki is astonished by the turn of events - an easy job turned into a matter of life and death. Sakai thugs turn out to be real killers from Chicago. How will they manage in this perilous situation? Will Megumi accept her past and present? I guess I won't spoiler everything after all and the answers can be found in my video playthrough. 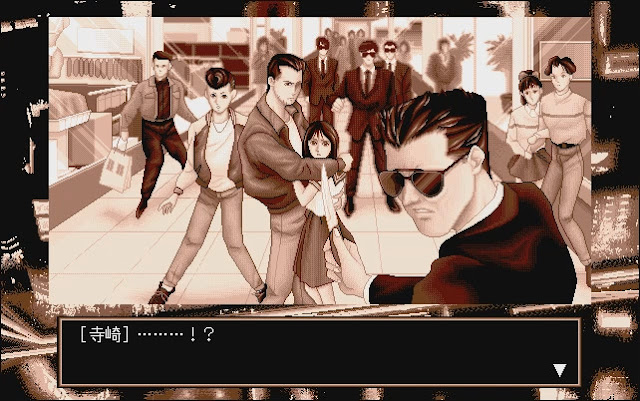 CG: They are quite uneven. At times Megumi is cute, but mostly her face is distorted in some manner. Shinji is the only one who looks ok, mostly because his face is drawn in a comical way all the time. But all CG are stylish in sepia tones and are very multiple, setting a unique atmosphere of the game.

Overall comments: Shinjuku Monogatari was devised as a series of games and in the end of the first game we get the synopsis and intrigue of the second episode flashed. And for that reason we get to know a lot of side-characters who are a colorful bunch, but don't really get any meaningful role in the game. Would I really want to play another episode about Ibuki and Shinji? Actually, not. But was the game a failure? I don't think so. The game was a part of very strong movement to cleanse the newborn genre of visual novels from constant sex allusions and make it a genre for literary adaptations and talented scenarists debuts. But we got what we got. 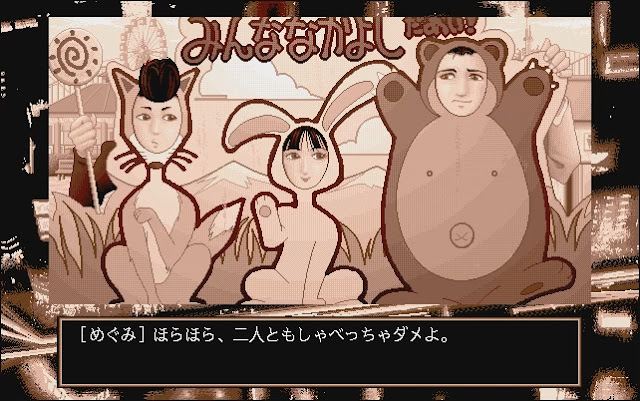