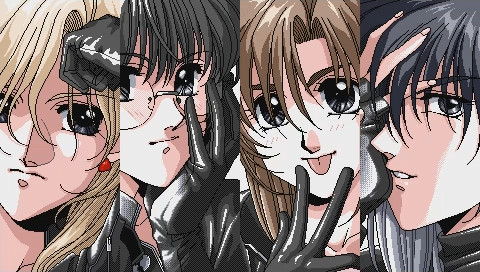 Foreword: This is one of the best masterpieces of the year 1993 and cyberpunk themed on top of that. I could not miss the chance.
Title: HHG Heart Heat Girls
Developer: Nihon Create
Date: 1993-12-02
VNDB link: https://vndb.org/v8716
Length: 5 hours.
Game type: Command selection + Point and click + Action elements ADV
Youtube walkthrough: https://www.youtube.com/playlist?list=PLENAECnNmAq8F5WmXr06-5E634NvmhPmU
Difficulty: Low, but I managed to trigger Game Over once still - game just jumped to the beginning of the scene, so it was convenient. What was less convenient is saving only at few specific places. I actually had to replay the whole first chapter because of that and electricity cut.

Synopsis: HHG is set in a futuristic world, in which humans co-exists with androids, highly advanced cybernetic organisms. However, this co-existence is anything but peaceful, since android are going rampant, and a special police force known as ACP ("Anti Criminal-cyborg Police") is specifically assigned to deal with them. Two young and lovely police officers, Angelica and Apple, receive a S.O.S. signal from two army pilots, who were attacked by a mysterious female cyborg who called herself Patricia von Kreuzel. Upon arriving at the crime scene, the heroines find no survivors. Together with their colleague, a young detective named Keith, they must investigate and solve this case. 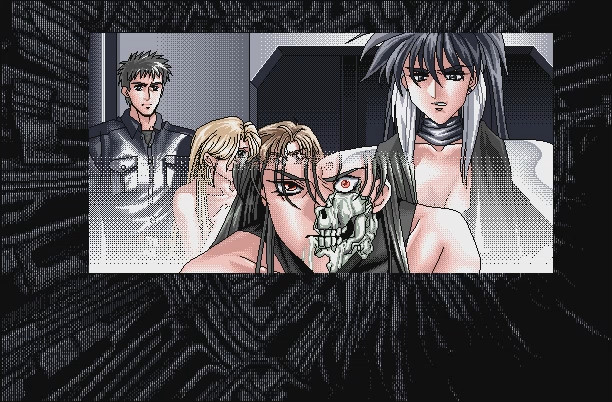 Rating comments: As usual, I find it difficult to rate most of pc-98 games over 7, so 7 is almost the top score. My biggest complaint about the game that it lacks excitement and charismatic characters. There is only a handful of curious characters even though cyberpunk is a favorable ground for all kind of delinquents. Main heroines aren't cute enough to be the center of attention. Add the fact that it's basically an all ages game with just couple bare chests of half-cyborgs at the very end and you get a slow unwinding story that makes it easy to doze off at times. All the leather fancy dresses with gloves and short skirts are wasted here. 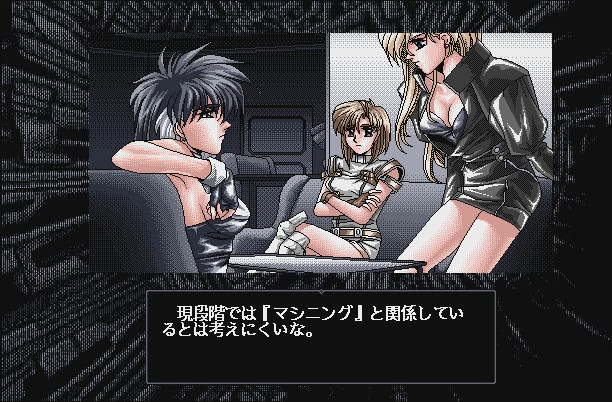 Protagonist: There are three main heroines. Ann (Angelica) is a descendant from an important aristocratic family famous for scientific research. She is long hair blonde and is seen as a spiritual leader of the team. Yui is the silver hair girl with a messy haircut. She has quite a shady criminal past prior to joining the team. The last of the protagonists is Apple who is a short hair blonde. She's quite a normal girl character-wise, but she's the best hacker in the team. Well, four girls are featured at many screens - the fourth one is Patricia Von Kreutzel whose name is featured in the game intro, but she only appears at the very end of the game and uncovering her personality is already a spoiler. 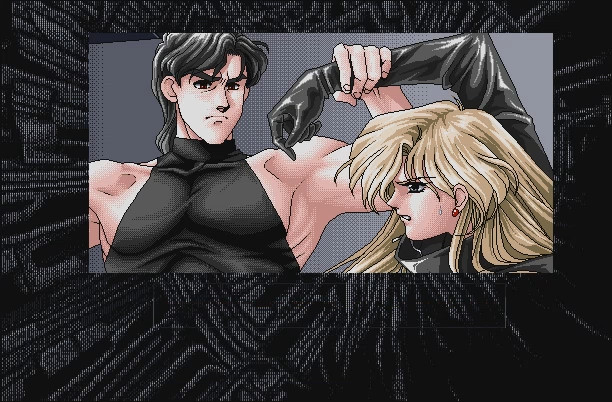 Characters: There aren't enough colorful side-characters in the game. Girls's boss is just an old man who shouts all the time. The information bank bartender has an appearance of a normal punk and he does not add the spice. At some point in the game a huge man appears who overpowers the girls greatly but he just frees them and leaves the area with the reader totally puzzled of what the hell just had happened. Keith is a young detective who is supposed to be a part of girls team, but even though his name is called out often, he almost never appears on the screen so at one point I even started to think that Keith is another name of one of the girls. The reporter guy is quite a normal one. To tell the truth almost all the side-characters are males which does not add appeal. 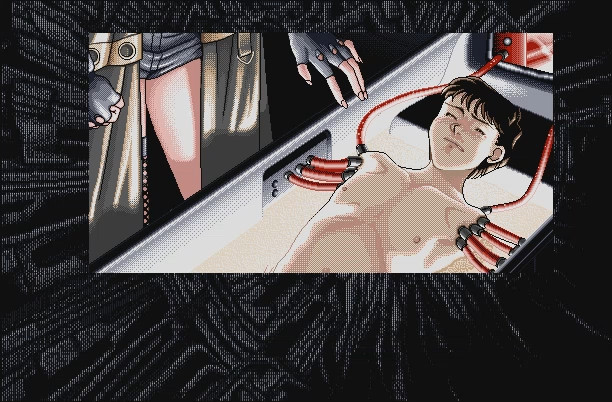 Story: Ann and Apple receive a faint SOS signal and hurry to its coordinates. They make it the first to the spacecraft crash spot. They pick up some strange cyborg parts and are attacked by a cyborg of a strange model, but they manage to take him down. What makes it most surprising is that metal cyborg has some white essence playing the function of blood. The military unit that arrives next strongly suggests to leave this case to the Anti Criminal-cyborg Police. But the analysis of cyborg parts shows that one of them contains human brain cells. Why is there human brain in the cyborgs? Who is in charge of brain smuggling? What's the role of the military? Is there a government level scale conspiracy unfolding? 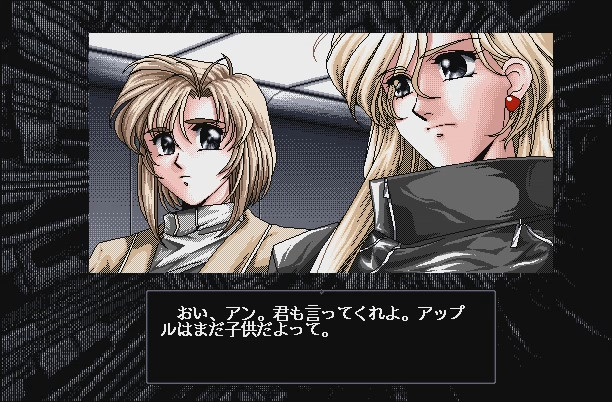 CG: CG look modest. Some heroines angles are even passable, but overall it's passable at best. Picture takes only like a third of the screen and that hurts a lot. I could only enjoy close-ups on the faces. Animation does not really help much.

Sound: Sound is ok, but there is no voice (naturally) and no sound effects making BGM irritating sometimes. 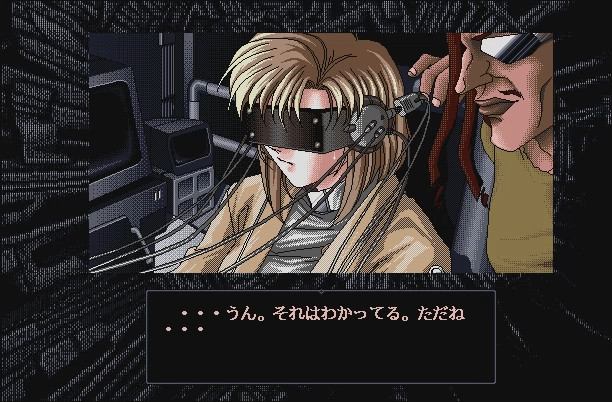 Overall comments: So the game is an attempt to make a long serious cyberpunk story that would present an interest for the sake of the story. But it had to adhere to lots of other methods to keep the interest - point and click sessions, 3d mazes, shooting robots action minigame, wide partial animation use, some gore and and even some eroticism at the end of the game. And it still fails to keep interest at all times. The investigation moves too slowly with visiting the same places for obtaining new pieces of information filling the puzzle. The dark palette leaves a mostly negative impression. But the story was worth it and it was nice to see the similarities with Silver Jiken, I'm sure HHG was one of the inspiration sources for it. 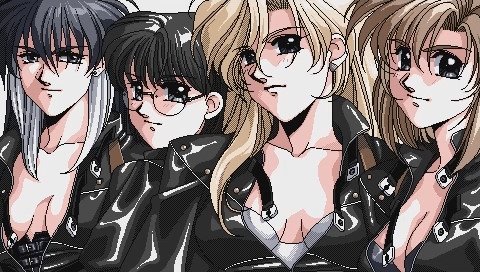