Foreword: Game had already couple reviews, but those weren't too specific on the story, so I had to check it out myself in the end. 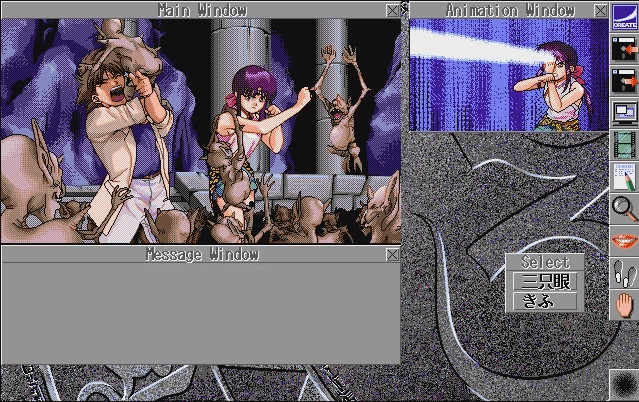 Title: 3x3 Eyes ~Sanjiyan Henjou~
Developer: Nihon Create
Date: 1993-02-05
VNDB link: https://vndb.org/v4547
Length: 6 hours.
Game type: Command selection ADV
Youtube walkthrough: https://www.youtube.com/playlist?list=PLENAECnNmAq-kxnAJKmFd5cOYSn55q0UZ
Difficulty: That happens to be the main part of review. FM Towns/PCE version is perfect with difficulty level low, full voicing and nice interface. The PC-98 version is gamer's hell, but only this version is hookable, so I proceeded with it. It's the fullest version having extra parts the other versions don't have, but pc-98 version has clunky interface of multiple windows that keep jumping all over and horrible mechanics that demand multiple clicking on the same commands to proceed with the game. That much useless clicking forces to miss on important parts as well. And there was a pitch moment in the second branch that made me waste two more hours on clicking through every room and searching for capture information which did not really help me, so only bruteforce clicking through every possible variant in each room only helped. 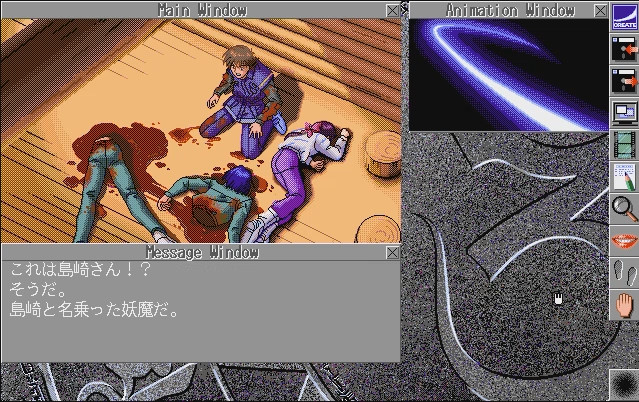 Synopsis: 3x3 Eyes ~Sanjiyan Henjou~ is based on the manga and anime series 3x3 Eyes. Pai, a young girl from the immortal tribe of sanzhiyan, three-eyed demons of Chinese origin, wants to become a human again. She meets a Japanese teenager named Yakumo Fujii, whom she accidentally turns into a "wu", an immortal obedient servant of a three-eyed demon. Together, Pai and Yakumo try to regain their lost humanity.
This game can be considered a side-story to the series. The player does not control Yakumo, but an ordinary high-school student named Kenichi Yamamoto. Accidentally, Kenichi comes into contact with the world of demons, and now he needs the help of Pai and Yakumo to be freed.

Rating comments: I actually expected more from the story and hoped for more gore. The characters only get interesting in voiced version and in PC-98 not so much. PC-98 version is so horrible that it's a miracle I made it to the end. 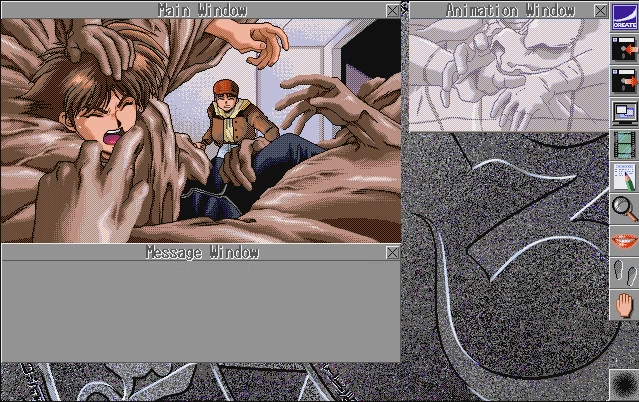 Protagonist: Kenichi Yamamoto does not really give a good impression. Pretty normal one for a fantasy story - positive, brave, curious etc.

Characters: Pai is a cheerful girl who happens to have her own secret. She and Yakumo don't really play an important role in the story - they just tag along and support. Sujin is the main heroine and love interest of Kenichi. She's a mysterious blonde with some superpowers and her true aims aren't clear. All the other characters get mixed in the swarm of children who get caught up in the blizzard and they go out of the stage more or less together at one point. 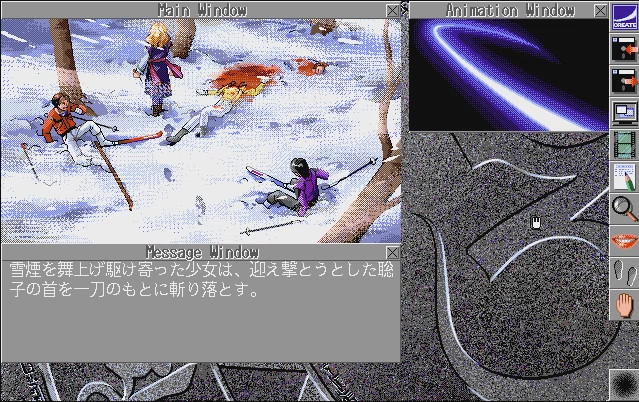 Story: Kenichi Yamamoto just happens to have some bug crawl inside his forehead - there's no story behind it - it just happens. And at the same time strange persons start to find him interesting and some supernatural events start to occur around him. He and a swarm of other children get caught up in the blizzard and find shelter in a wooden house. However, a murder happens and panic rises with part of children leaving to find the way out of the blizzard. And both parties get attacked by the killer. And the battle finally shows who is the enemy and who is the real friend. From then on the main heroes seek the way to get the bug out of Kenichi body and for that seek advice from a specialist researcher and from then on seek for the remedy in different parts of the world.

CG: CG are shown in a small window. That looks awful.

Sound: PC-98 has horrible sound support. No sounds - just BGM. And those BGM aren't always suitable for the event on the screen - it can easily be a merry tune during a sad event. 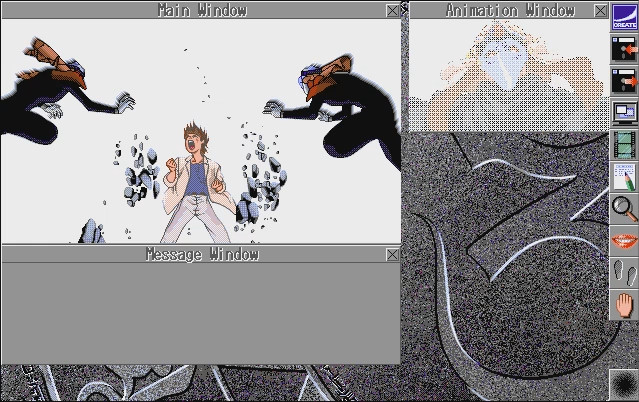 Overall comments: So the game starts with the longest clicking sessions and slowest progression ever. It would be easy to fall asleep for several times if you did not need to click furiously for 100 clicks per minute. Then there goes the short action part where the things settle - and it's the best part of the game. The second half of the game of searching around the world just does not have much in the story department - it's just defeating several lackeys of a bad guy and finally meeting the bad guy. And to make life more difficult there are two mazes implemented - one for each branching. I've only found the basic branching that actually coincides in the same story in the final part of the game. There should actually be a way to get the second naked body scene and even another ending. So it all comes to a poor conclusion - PCE version can't be read since it's not hookable and PC-98 version lacks the interest to be read attentively due to horrible mechanics. I would call the story eclectic since there is not much explanation for actions - like professor is lost and noone cares since there is little time left till mutation or like the light is blown out and four people can't find each other in a narrow corridor and just go separately without really trying to get together. There are some minor events that I fail to get the meaning of. So the main definition for PC-98 version is torture - both story-wise, mechanic-wise and even sound-wise. Quite a short story that would fit in a 40-minutes OVA is stretched mercilessly to 6+ hours of unsatisfying gameplay. 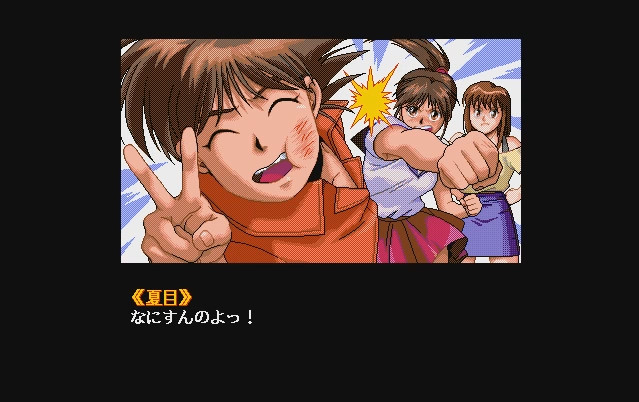