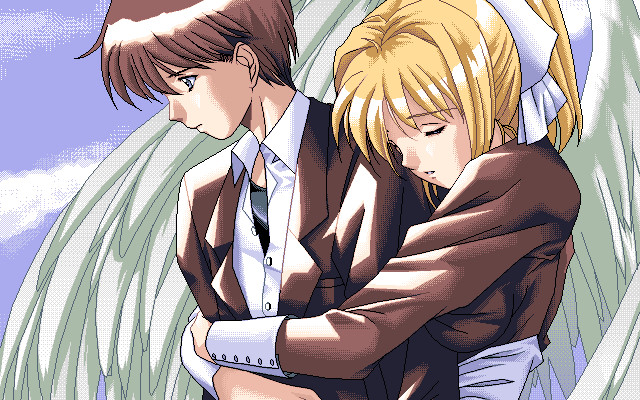 Foreword: Game has a very strong start and intriguing concept which made me play to the end. It differed from my initial expectations, but it's a very original and good-looking game, so I don't regret playing it.

Synopsis: The protagonist, Kusakabe Makoto, is living a normal school life without knowing he is the reincarnation of Lucifer. One day an angel named Sofia and a demon named Lilith come to him. They are the messengers of Heaven and Hell. The day of Lucifer's judgement is approaching.

Structure: Two routes depending on choosing Angel or Devil side with total number of endings being 5.
Length: 5 hours
Game type: AVG
Difficulty: Branching is actually very easy as only 2-3 first choices determine the ending, but there are many fake choices, so it can look confusing.
Character Design rating: 6/10
Protagonist rating: 5/10
Story rating: 7/10
Game quality: 7/10
Overall rating: 7/10 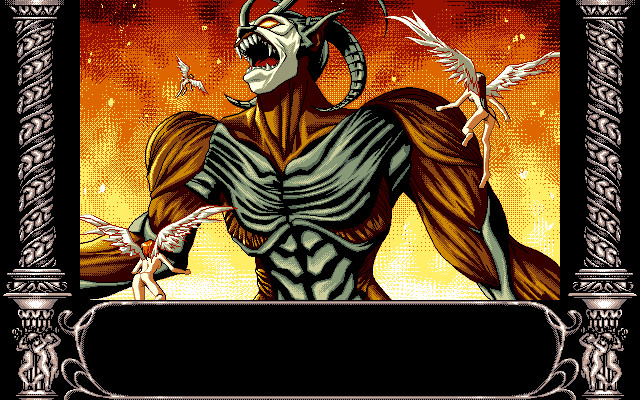 Rating comments: Game barely makes it to 7 which is still considered a masterpiece by me. The first route story was really impressive worth 8 or 9, but all the others were the very same route with some minor variations, mostly just before the ending. Characters are good-looking, but aren't developed. Protagonist is a pushover, as usual. But naked angel girls with gorgeous wings help the evaluation a lot. And there's some charm in seeing all the endings.

Protagonist: Makoto is an ordinary high school student who gets to know from one of the transfer students Lilith that he's an incarnation of the Satan and is going to destroy all life on the Earth in two weeks on Christmas Eve of 1999. And another transfer student Sofia says that Makoto is a savior of humanity. He does not believe either of them. But Sofia shows him her wings and Lilith introduces him to the world of pleasures, so he ends up taking one of the sides. I did not like protagonist since he was just killing time in school. He was hating his dull life and wanted for this unexciting life on Earth just perish one day even before meeting transfer students. He has an osanajimi Marimo in the same class and with all the otherworldly business he just forgets about her completely only stumbling upon her by pure chance in one of the routes. In Angel route he's passive, in Devil route a total dick. 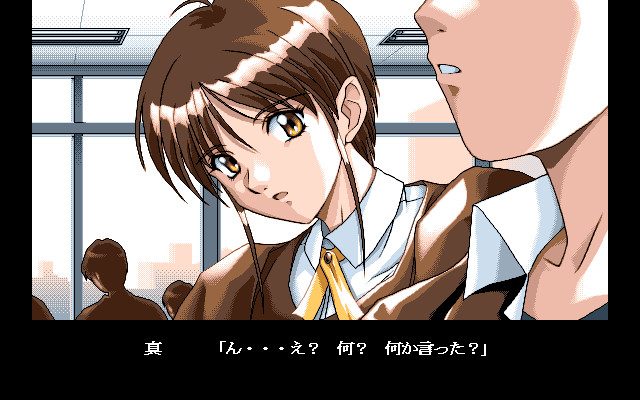 Characters: There aren't really character routes, so individual characters aren't developed. We get an angel Sofia, a devil Lilith, a childhood friend Marimo, a teacher Ruida who comes from the descendants of angels and male friend Shinichi. The rest of the characters are one-time thing and no female character stays without a H event. Ruida is actually a character who undergoes a lot of development. She's a natural ally of Sofia, but gets seduced by Lilith in the beginning who amplified her lust. So Ruida gets into a difficult position where she does not want the world to end, but can't resist Lilith's will as well and that leads to unexpected results in some endings. Shinichi is also worth mentioning as he's a stoic and benevolent character - he acts as a sempai in relations with Makoto.

Story: There's actually not much in the story department after the opening sequence. Both Sofia and Lilith invite Makoto to their houses in the evening and this choice determines the side while following sub-choice determines the ending. Then for about two hours goes a fixed part of the story with Makoto finding indecent activities at school and in the part and also discovering a bonded missing girl in the church who craves for intimacy. Only being able to repress this temptation opens up the best angel ending. And the second half of the story depends on the chosen side. As a devil apprentice Makoto is encouraged just to do as he likes and wait for the world demise and following an angel path he needs to get intimate to several school girls who have are angel descendants. Doing that is supposed to restrain the Satan in him from breaking loose. This part is good as girls have their own wills and require some evidence or persuasion. But Makoto is such a failure protagonist that he can only whine. Sofia encourages him to use his super messiah power to make girls believe he is the Chosen one, but she does not know how that works and Makoto is not able to find that out, so the fate of the world depends on a chain of random events mostly. I hope I did not spoiler too much by now, but I also need to emphasize the endings. I started with the devil ending and it was impressive. The second devil ending was of the same pattern, but Makoto got his own malicious will to aggravate things even more. But finishing angel route I also got a bad ending... WTH? Second angel ending was also a failure. I'm glad I left the final best angel ending for the final... and it was impressive and impactful - that's all I can say without spoilers. Since I got a video of playthrough up, it's not difficult to see for yourself now. 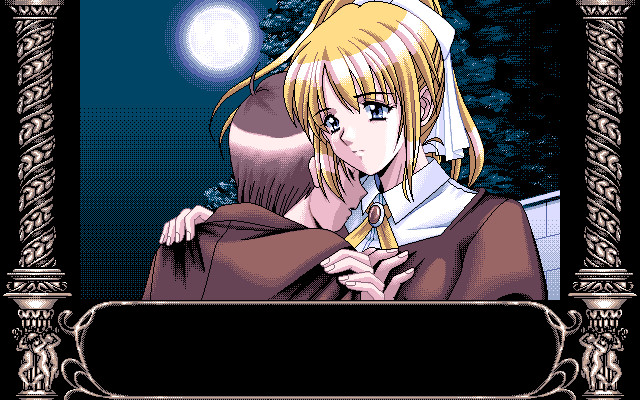 CG: I absolutely liked this dim retro palette and gothic uniform. There's a lot of attention to the dressing and those corsets, black t-shirts, long stockings and church-like gowns impress indeed. There is a substantial number of CG.

Sound: Game is fully voiced (apart of the narrator). I found some exceptions to this rule when Makoto tells a long history of one city district and he's not voiced at that time. But it was really exciting to find a 1996 game with full voicing. BGM are actually nice, but the level can't be adjusted. I had to turn it off at times where the dramatic loud melody prevented from listening to the characters. BGM volume is not adjustable and it's a bit too high to my liking.

Themes: Game's based on thy hype over millennium shift. I personally like apocalyptic theme in visual novels - I liked Subarashiki Hibi, Shuumatsu no Sugoshikata and will definitely review Tsui no Sora one day.
There is also a nice fallen angel theme with its logical realization in one of the endings. 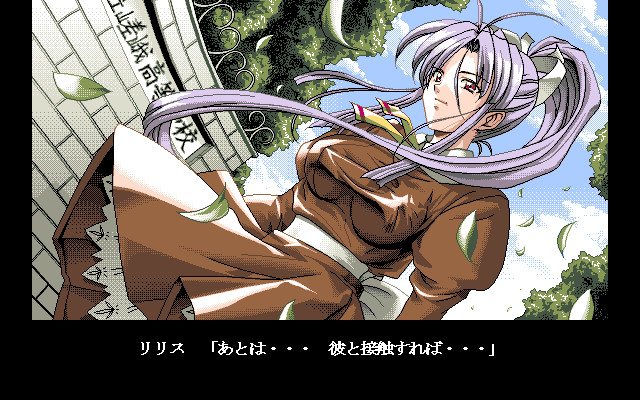 Overall comments: Game of big unrealized potential. My biggest complaint that there is no action in the game even though there all prerequisites for it. For example, there's this Lilith butter servant with a sadistic face. He's destined to be a villain, but he only participates in on rape scene and then shows up several time in Lilith room and... that's all. But Angel Halo also failed as love drama. There this supercute Marimo childhood friend who loves the hero, but she only plays a very episodic role literally occasionally bumping into the hero in one of the evil routes and thus getting her ending by pure coincidence and inside an evil devil route. So it all gets down to listening the explanation of Makoto role and just waiting or trying to fix his fate by mating with angel descendant girls. And Sofia with Ruida act more like pimps to drag girls to Makoto and threaten the girls with the end of the world in case of resistance. That's hardly much different from Lilith approach especially in the light that Sofia uses her body to attach Makoto to the light path and not the Heavenly means or reasoning. But as this unnatural situation gets underlined by all 5 endings the game gets some charm over it, not a logical conclusion type of charm, but that of the chaos solution for the chaos situation. And we also love Japanese visual novels for this impactful and affectionate chaos. 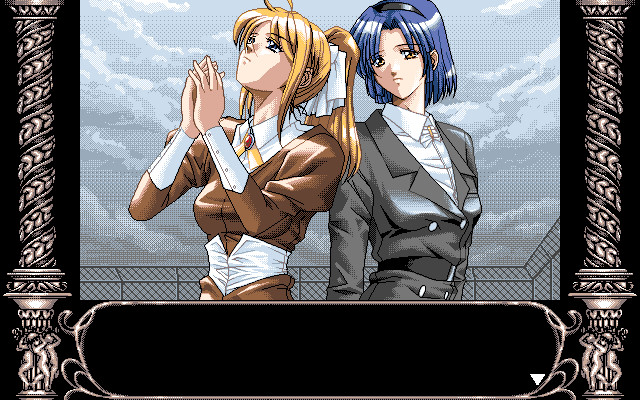 Hi, how do you run your insta-translation tool with emulators, especially PCSX2?
Thanks and keep up the good work!

I used this article as main reference https://forums.fuwanovel.net/topic/11329-how-to-translate-and-play-untranslated-visual-novel-on-emulators-psppsxps2dsgamecubewii/
PCSX2 and PPSSPP find memory threads with a good success rate with Cheat Engine + HAT (and "Translation Aggregator" for clipboard translation), just did not test it with many games yet.
ePSXe is another thing... only had one case of full success and another two cases of partial success out of a dozen games. Probably old games just had too ancient memory handlers.

Wow, thanks for the link! I'll try it out!

So, the final best angel ending, what happens in it? Can you tell me about it?

Final best angel ending is the best because ... it's the same depressing as all others! Lucifer still won and for three days scorched the Earth till only void persisted! The world is doomed and humanity is eradicated to a nil!
Those crazy Japanese...

What? So the final best angel ending is a downer ending? Humanity is eradicated to zero and the world is doomed. What can of ending is that? It's a bad ending. There's no True route? What do you think about this?

There is no True route. And even if you do your best to save the world, you just can't. I guess that was the intention of developers - to get a shocking ending and show how powerless one man is before the deities. I respect such choice and it is as viable as a happy ending that we did not get.

I see, so the world is ultimately doomed to die off in all the routes? This does show how powerless one man is before the deities. There's no happy ending, but it makes sense for this story. Anyway, humanity is doomed in all the routes?

Humanity is doomed in all the routes.

That was a pretty good review, however the link to the youtube channel say that the acount was deleted, aee you gonna reupload these videos in the future or they are lost ?

They are lost together with hundreds of playthroughs at old channel.

Old channel was deleted like in January or so. Everything after that went to new channel. Only really old game playthroughs up to year 1998 or so got lost.

I see. Thanks for clarifying. Can you show me the link to the new channel?

New channel link is in every review page from 2000s, also at the top of the page, namely https://www.youtube.com/c/vndbreview