Foreword: Chose this game just because of the brand. 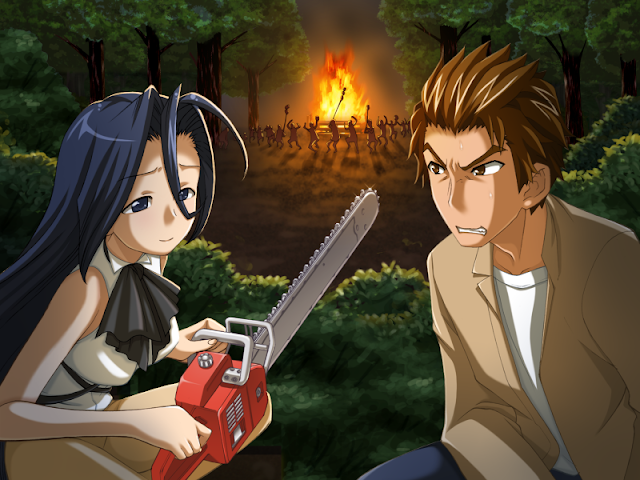 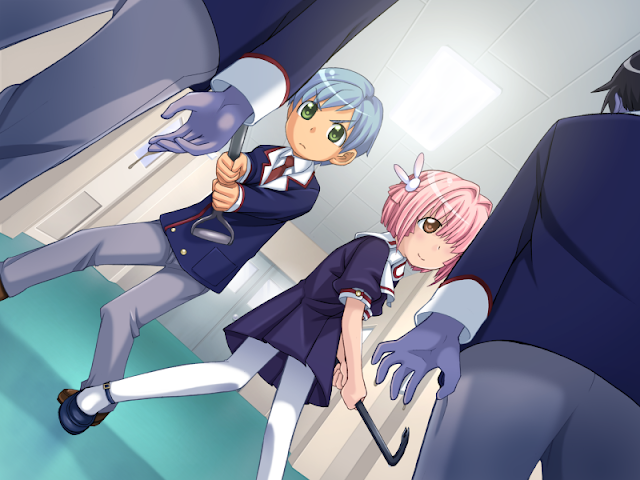 Liar-soft call this game class B and sell it really cheap, that's why there are some reviews, or rather impressions of it. Love & Dead was initially issued in three parts which is very rare, the last time something like that was done by C's Ware in Chikyuu no Heiwa o Mamoru tame, and it sold very bad, especially later parts. But Liar-Soft has a perfect reason for splitting their work this way. It's because each of three male editions include three heroines each having x4 good endings and several bad endings. As one reviewer counted, there is 81 unique ending, and 89 endings overall. Who in sane mind would want to play through 89 endings? I did not record bad endings (since they are basically either death or violation), but even I encountered 1-2 endings per hour of play, so you can see that this game is of episodic nature and thus quite difficult for evaluation. But I'll try. 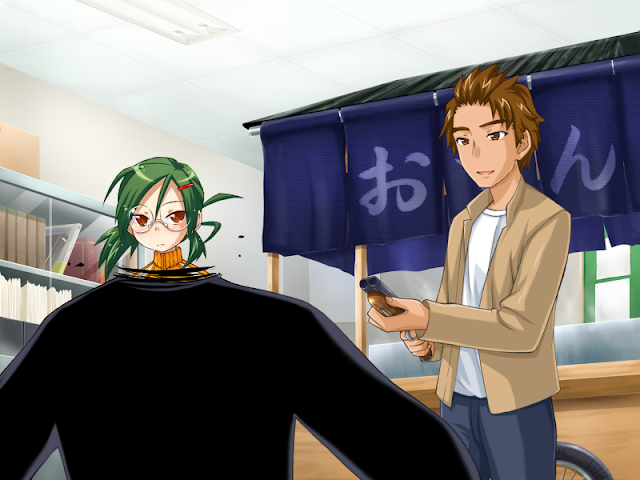 The content is quite strange. There are some school dialogues with scenes (except for Kai since he does not attend this school), then usually physical hooking up with some girl and then branch to follow one of three girls available. Zombie girl Sonomi is present for all the male protagonists. Hazuki is an easygoing heroine for Fuuta and Romio, the other heroines are unique for just one protagonist. Somehow, only these bonus heroines are actually interesting personality-wise - Uri, Reisa, Hatoko. 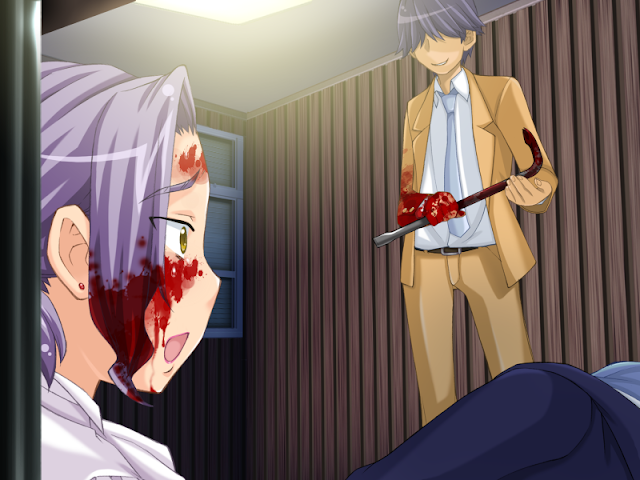 As for protagonists, young actor Kai gives off the best impression of them all since he is just normal, nice and dates nice girls (except for Sonomi, but she's the marker heroine of the game, it can't be helped) and ends up on a date in a hotel every time. Fuuta is our good for nothing unreliable student, so girls have to be proactive. But teacher Romio is the worst since he coerces his heroines to H constantly, these routes are most H intensive. 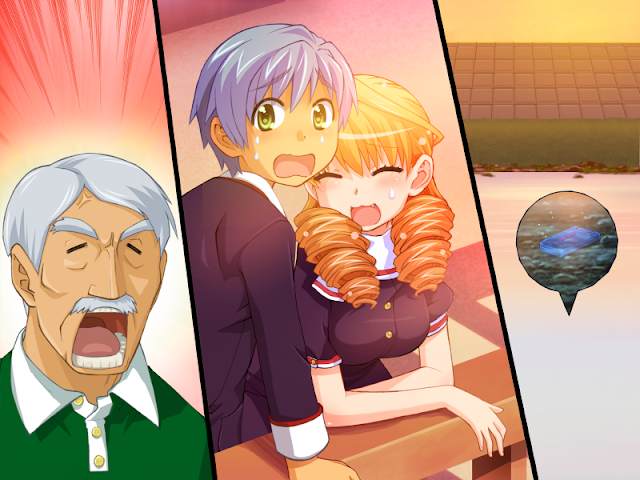 Scenario content is quite fun and fast-paced, but endings are super chaotic. Humanity dies couple times there or gets infected, or bestialized or whatever. Protagonists get killed 39 times, but we also win Nobel prize, win parliament elections and do other crazy stuff. Game concept is very simple - you either get love or death, and quite often death after love. Every galge deals with love, but it's more tricky with death. Zombie girl Sonomi is introduced to all protagonists routes as heroine to emphasize this second element. A lot of death situations get linked to Sonomi this way or another. 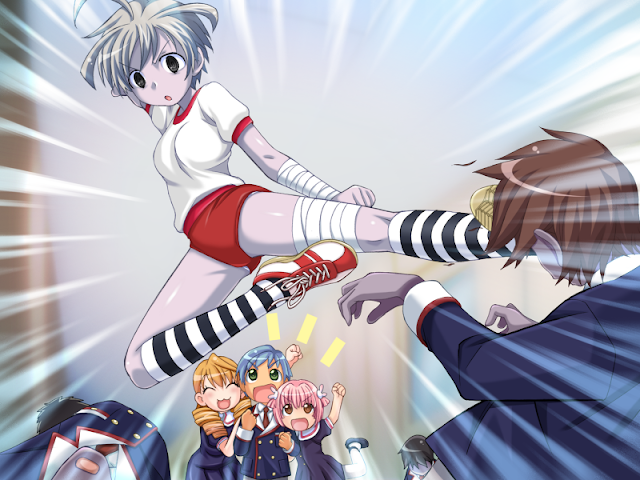 So, Love & Dead is a very strange game. It tries to introduce evenly humor, H and shocking content, but becomes so complex structure-wise on the way that all these layers can hardly be tasted fully. In order to save structure logic I recordered only good endings, thus most of episodic shocking content and H gets missed. But at least love and humor are presented in full. Videos aren't long, so I don't see reasons not to sample some of Uri, Reisa or Sonomi routes and see how it goes. 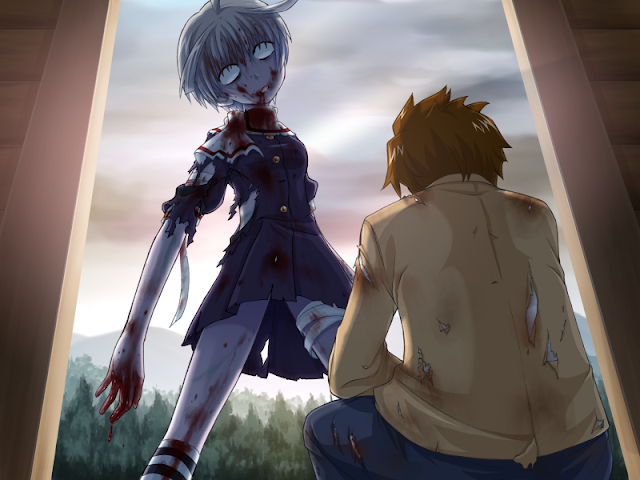 So, how many good endings are there? I believe no one dies in those? No true ending or route?

Of episodic nature, huh? So it goes back and forth, like a Monster of the Week thing?

36 good endings? I wonder if they're worth getting them all, considering that it seems to focus on comedy?

Endings aren't worth to get here. Each heroine has one main pure love ending while others are either H or bloody endings.

I see. Wait, bloody endings? Someone dies then in a weird way?

Protagonists get killed 39 times, in 39 endings out of 89, usually just stab from the back.

I see. About the main pure love endings that each heroine gets, what are they?

No one improves in this game. They just may go one way and die or go other way and have H event. I seriously don't see any point in the game. Couple zombies endings were fun just because someone finally started to fight someone else, but seeing credits right after this scene is devastating each time. Game has huge number of choices, dozens and dozens of choices, so even following a walkthrough is very troublesome. Discovering endings on my own is not worth it at all. It may feel ok while you try to figure out what this game is about, but it's such a petty sight that I wish I did not play it.

Yeah, based on what you told me, the huge amount of endings and finding them all on your own (even with a walkthrough) are not worth it whatsoever. The fact that no one improves or develops in the game tells you so much on how meaningless the characters themselves are. If the characters are boring, then playing the VN has no point to it.

Seeing the credits right after this scene (the couple of zombie endings) is devastating each time? How so? They're too long or the endings themselves are ridiculous?

Seeing credits was painful for me each time as I needed to search for a new ending next. And each playthrough is very short - 1-2 hours. Doing the same thing for 36 times just to see another short ending was irritating.

I see, that makes sense. Trying to search for 36 different endings, endings that are quite short, in very short playthroughs are a pain in the butt. You'll be looking at the credits so much that you'll die from boredom and repetition. That about right?

Right. I don't like it when there are too many routes or multiple stories, and this time it was too much.

Yeah. What do these main pure love endings entail anyway, besides the romance in them?

Makes sense. What about the other good endings, if I may ask?