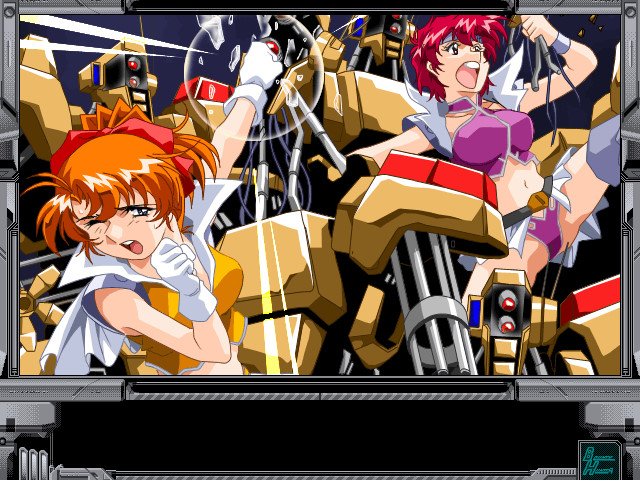 Foreword: Game's obscure, but it has one absolutely overwhelming Japanese review (giving 8/10 score btw) which claims that the game has references to dozens of media sources. I'm not good with media of 1996 year and earlier, but even I could discern 5 sources. Visual novel is easy to read and it's a great laugh at times while preserving a solid and intriguing plot with lovable characters, tonns of CG and almost full voicing. I say it's a neglected masterpiece.

Synopsis: Rudy is a famous space bounty hunter with top notch skills. But she's famous mostly for her ability to fall into troubles because of uncontrolled destruction power. In order to deal with the debts she goes to casino, but drenches down into even deeper debt. She undertakes a top secret military case as her last resort to get big money fast. 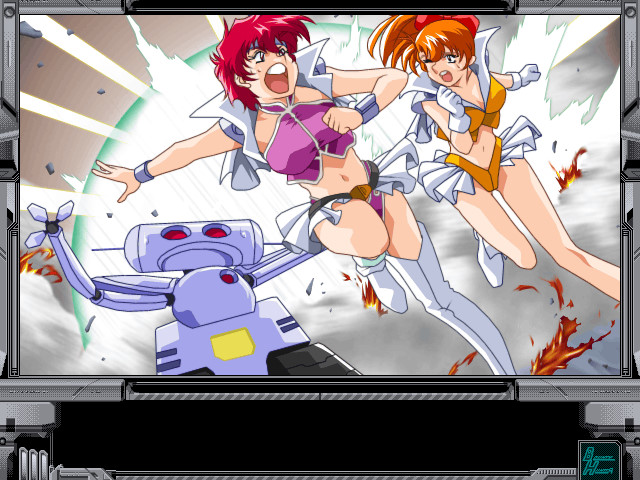 
Rating comments: Can't really call it the game for 8/10, but it's decent enough to be called a masterpiece. Main heroine is impressive, characters charming (yet not developed), space opera story grappling and numerous CG and almost full voicing make up in the quality department. It has flaws, but I shall elaborate later.

Protagonist: Rudy is our hermaphrodite strongest in the universe space bounty hunter. She blames in her failures anyone else but her and picks fights in dialogues with everyone. Being of simple and cheerful mind, Rudy enjoys drinking, money, a good company and space adventures. 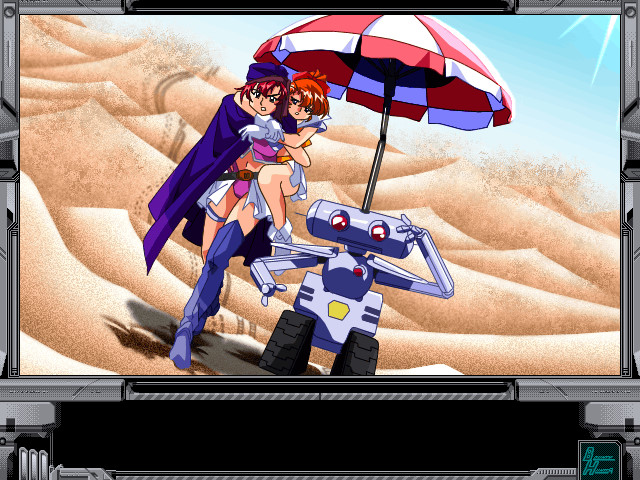 Characters: The only other significant heroine apart of Rudy is Anna who is an alien taking human girl form and who is waiting patiently for Rudy to drop her home. But Anna appears quite late in the story, after a third of it passed already. She's helpless and exists mostly as a comic relief - she always acts straightforward and answers honestly ruining Rudy's sly schemes. Other characters only make episodic appearance, although all of them are a colorful bunch and fun to have around.

Story: Much of it is in the synopsis. Rudy gets into a huge debt after a passionate mafia boss chase around the city and being outwit at the casino house. She's only offered poor jobs by the bounty hunter guild leader, so she decides to steal the big job from another guild member Reike. That involves investigating anti-planetary missile weapon. And while on the task, Rudy comes upon an alien in cryogenic chamber who takes the form of human girl Anna. The whole game adventures actually only start from here, but as game adapts to the role of bakage events start to lose ultimate aim. That's the best part in the game - you don't wait for the ending, but just enjoy crazy funny dialogues. And my deepest regret is only that I failed to trigger all the foolish CG and all the extra dialogue lines. 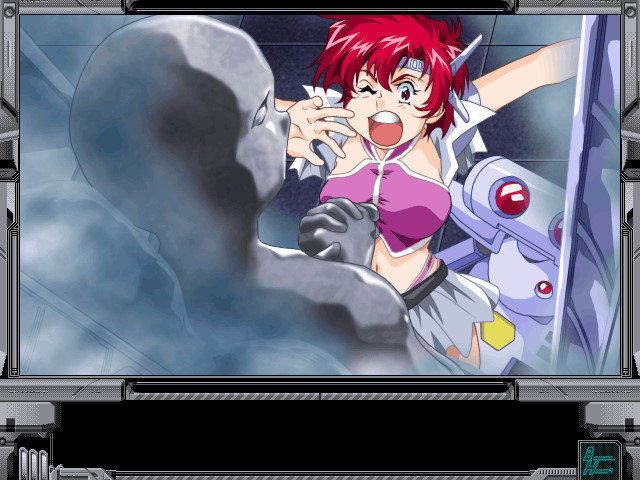 CG: Game lasts around 5 hours and does not use sprites for the characters... yes - it's all done in CG only. Hundreds of CG! Sometimes such CG would only last for a few seconds! I was really favorably surprised by the effort.

Sound: Protagonist is a woman and all women in this game are voiced. That actually means that almost everyone is voiced considered that game only has bounty hunter guild boss and robot Freddy as male characters as well as some nameless episodic characters. At times I forgot it was partially voiced since only scenes with girls proceeded. Voicing is done here very well and helps a lot the playful mood of the game. 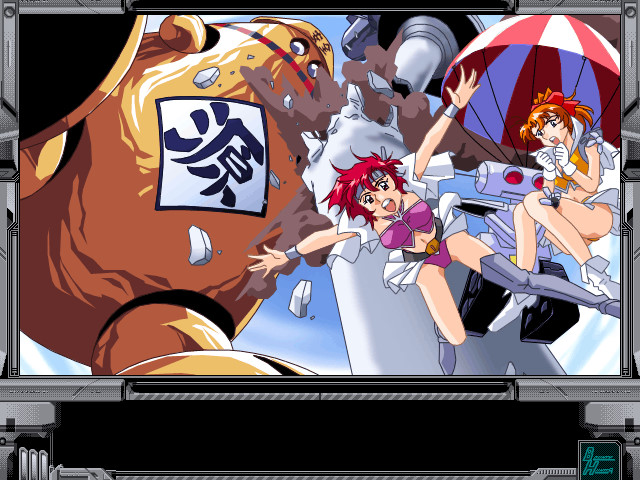 Humor: It's just everywhere. Mostly in form of verbal insults and crazy dialogue lines. But I really like it when the game breaks the 4th wall and Rudy does it quite often in hilarious ways. Here's one moment where I laughed out loud and could not stop laughing. Rudy faces a military robot and is presented with three choices. I choose third one with ridiculous phrase "Once upon a time there lived a grandfather and grandmother". Next lines showed on the screen: "Grandfather went to a sauna, grandmother went to a host club". Next we see Rudy getting punched and she shouts "Do not pick this choice"! Then I picked the same choice again. What I got was "Then grandfather went to refresh". And next we see Rudy punched and she shouts "Reality is severe"!


Overall comments: I have not enjoyed a bakage that much for a long time. The best thing is that you don't need to care for the plot much or for branches or saves - just enjoy what's happening on the screen at this very moment and that's it. It's a game for relaxation. I feel like some of the spice is lost in machine translation and some cultural layers lost since I am not a Japanese native of the 1990s. Also I appreciated that H events are playful, short and totally forgotten a second after. Well, H events aren't usual as well - they are fun and memorably inventive. It's rare to see a game that puts a player first and everything else second. It's a game that leaves a lasting warm impression and is worthy to be called a masterpiece and a hidden gem. 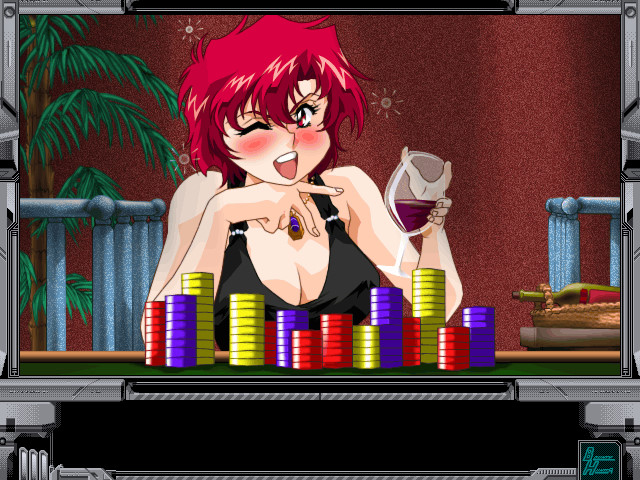