Foreword: C's Ware produced so many good works that I inevitably had to observe each work very thoroughly. luv wave with its 3D half-naked girl on the cover looked more like a 3D adult movie than a cyberpunk game. Who knew then that it would be one of my favorite games. 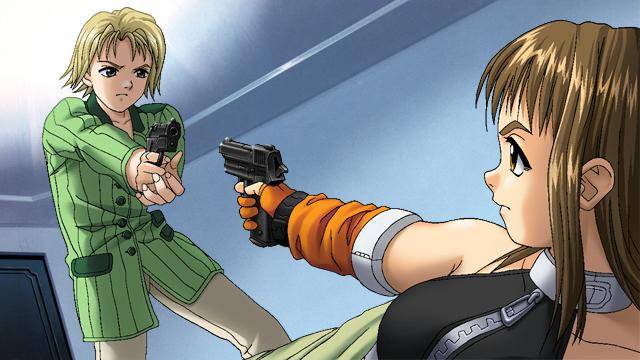 Synopsis: September 2039. XINN, the computer virus that shutdown the world's computers, threatens us again. You, detective Kaoru, must solve who and why, with your new cyborg partner, Alice. However, haven't you met her before?

Difficulty: Easy. You can't fail in here, but you can get stuck. Bruteforcing helps from any situation though. 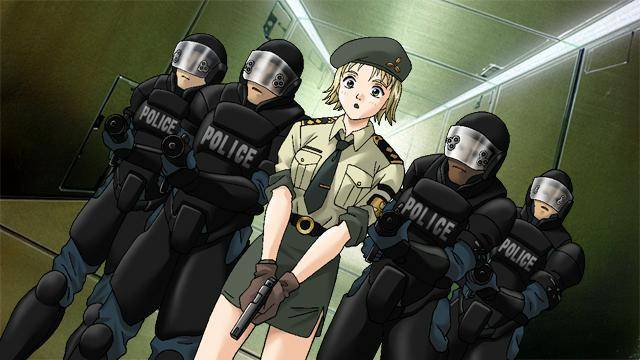 Rating comments: 10 for the third game in a row - that does not look convincing anymore. And game is actually a bit raw. It uses unique engine that makes it very difficult to run it in a windows even with side measures. Selection commands are just flying together with the output text. Sound levels for characters vary greatly (well, I think I found adjustment level in options for different sound frequencies that caused that). And most importantly, The afterstory crashes next to the end of it giving out a number of scenes missing error which is very bad for the scene that should be perfect and form a final judgement. So much for the game quality. Everything else is perfect. Every character is well developed. The story is one of the best examples of cyberpunk sophisticated narrative with lots of twists and mind-blowing elements (in a good way).

Protagonist: Mikogami Kaoru is one hell of a protagonist. He's in special forces unit specializing on assassinations. He's tall, blonde, often smoking and inevitably in a long coat. He's got a sister working in public security division, a lover who specializes in hacking and cracking and now also an android partner. He does not like assassination missions actually. He's always rational, calm, reserved, but he can be very proactive if he needs information from someone. 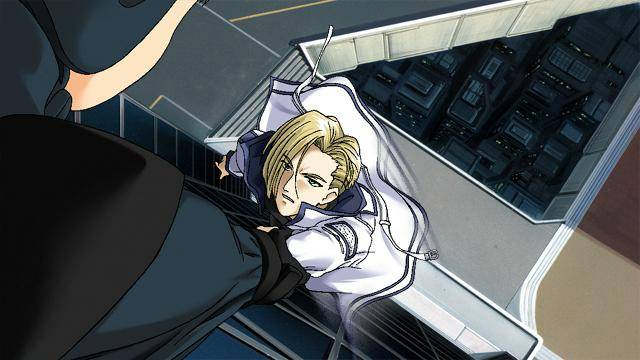 Characters: Game is a one story without branching, so some characters are inevitably given more attention than others. I was actually very glad luv wave does not fall under any generalizations. Unlike very stupid hentai OVA based on the game there is no H-event with protagonist's sister and there is also shop-owner Kyoko who is left alone without one. This really helps to feel the story. If you think that you can watch OVA to grasp the story you'd be so wrong. OVA covers only beginning events more or less truthfully. The rest is a totally different story. Not even a greatly cut and simplified one, but a totally different story with the gist of it, the main opponent and the ending totally different.

Alice: New android partner and the leading female staff member. She starts as a killing machine, typical robot, but starts to change a little by little and ends up changing the people and the world around her. She's got a bottomless depth of character. 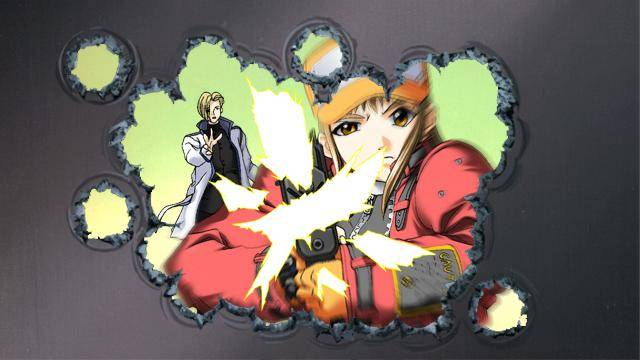 Mikogami Mamoru: Kaoru's sister. Light-minded police swat member. She's wasting way too much money, fond of tv and gaming. Very cool and bright heroine. And I can't thank enough that she does not have a H-event. She mentions that she was assaulted to be raped at work in the past, but it failed and things got better from then. But this gang rape scene was vividly imagined in OVA. Actually there seems to be a H-even with either Mamoru or Kanako and I had Kanako one which is great since I don't appreciate incest.

Takigawa Kanako: Mechanic of Alice. She's got quite a story behind her past. She was actually gang raped long ago and feels incompetent because of that. She wanted to become space engineer and construct space ships, but chose to change society instead and served as a special agent for half a year. Then she moved to a more calm field of work - android maintenance.

Takashi Yuri: She's the actual girlfriend of Kaoru. Her work is hacking and cracking - she calls it binary agent. She always wears long dresses. Due to her work she gets to know many shady individuals and trades information with them. Her story is very touching as she was thrown out of the house and was brought up by the bums at a waste place. Those bums compiled a computer from the parts in the waste dump and since then she's been very interested in computers. I suppose they also paid electricity and internet bills, but the story does not really elaborate on that. 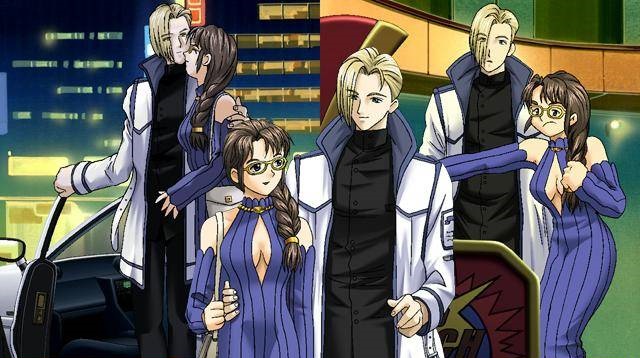 Yamashita Kiyoka: She's one of the shady individuals that trades information with Yuri. She formed her newspaper about net activities and is hunting for a scoop. She's an invaluable source of information if she trusts you. 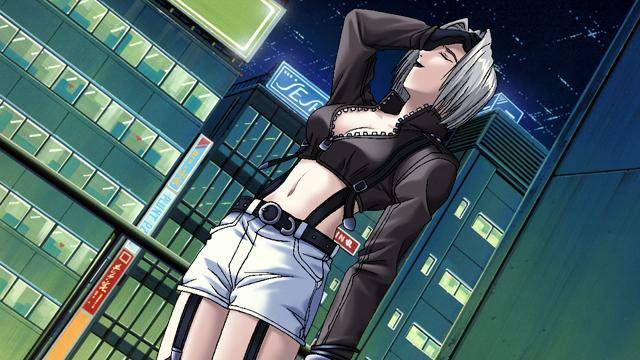 Diane Wiseman: A red-haired president of largest japanese computer company Digital Demand Inc. Strong-willed and ambitious. She's absolutely sure that her company can create a vaccine against phenomenon XINN that noone in the world understands. What makes her so sure? Does she know something that noone else knows? We'll figure it out. 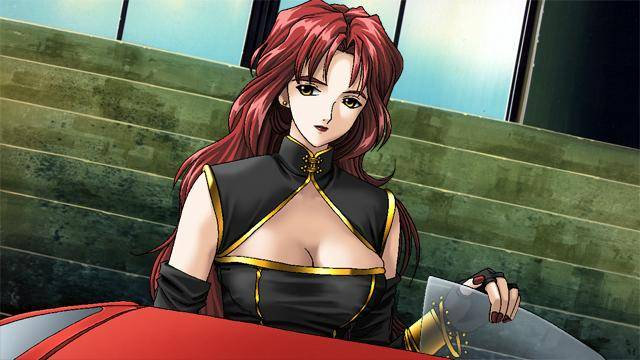 Mayumi Masato: Kaoru's Girlfriend from the past. It's really dangerous to wring anything more about her since that might easily become a spoiler. 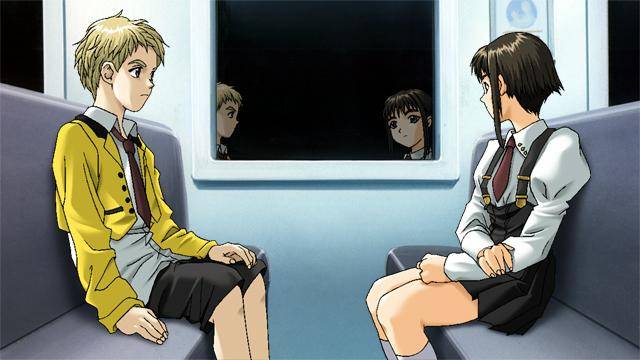 Kyoko: She's the mysterious owner of the hardware shop where Alice works on a part-time job. Noone knows where she takes the money since her business in constantly in the red. She's a mysterious character who gives very unusual advice and who develops many of the important themes of the game. 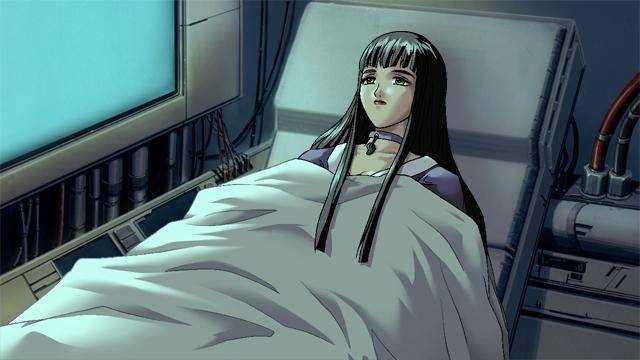 Story: Right off the bat you and Alice are sent on a mission by CIA command to assassinate some american guy Macy Specter who seeks refuge at japanese land. Somehow he gets to know about our true aim and he starts shooting and explodes his suitcase. When Alice connects to the computer afterwards she gets hacked and nearly burns her brain by the same american guy that they just killed. There's no time to rest since there's a new bombing incident announced and the culprit there has a totally different body but also claims to be that american guy Macy Specter. The command center manages to find Macy Specter hideout, but there is only some disturbing information found as well and new drug, the same drug that was found also at previous incident spots. Gradually we need need to figure this mess out. What's this new drug and what's its connection to the crimes? How can a consciousness of a person exist separately of the body and in several bodies? What is this XINN phenomenon and what did it try to achieve by 1 second blackout of all the computers? Who's the mastermind behind all that what does he want? There are too many questions and answers are slow to get. And when you get them... it turns into a different story about world dominance and living GOD on Earth.

CG: I was quite happy with the number of CG. Gore scenes weren't multiple, but looked really cool. My usual gore-show is in the end under spoiler.
HCG: To my taste the number of H-events was a bit too much. There were two scenes for four heroines resulting in just 8 scenes which is quite ok. Alice is a subject of only one very mild scene which can't be even called a H-event. But at the end of the game we're digging the past of the characters and it brings about 8-9 more scenes for former girlfriend Mayumi which is an overkill imho. Scenes are more erotic than usual and it's achieved by voiceplay and scenes creativity - there's hardly a single normal bed scene in the game.

Sound: Voicing is partial, but it's on for about 85% of the game, so can as well be considered as full voicing. Protagonist is not voiced, apart of his past self. As usual, I don't have complaints of bgm. My only complaint for sound is that by default there are different levels for different sound waves and that made lively characters very loud in my video playthrough and calm voices and males hardly heard at all. I'm very sorry that I could not figure it out earlier...

Themes: This game is Ghost in the Shell + Johny Mnemonic + Alice in wonderland and it raises a lot of themes. It's GITS because there' android girl and there's net consciousness wondering alone. It's Johny Mnemonic since new drug has 9 varieties and each contains up to 8 gb of data it it. It's Alice since this was not original name of android Alice. It's given to reflect a fantasy girl story in a magic land.
1) Can androids love? This is the first quite evident question that's posed. And the game kind of avoids an answer to this question, because Alice is not really an android.  Machine-Human-God dichotomy is discussed a lot in the game.
2) Can consciousness exist separately from the body? This in an ambiguous one. Macy Specter case shows that it actually can't since even during hacking there was a distinct body with his consciousness inside. But Alice case shows otherwise.
3) Can one become a God? There is a lot of discussion on the topic. At least three characters aim to become Gods. Is immortality enough to become a God or does one need to conquer the Earth? Characters have different approaches towards it.
4) Can one "remember" the future? Again, there's a lot of discussion on the topic with different views. Is remembering just perceiving or active influence on future events. Alice is the only character that can remember the future and she excels in all the meanings. 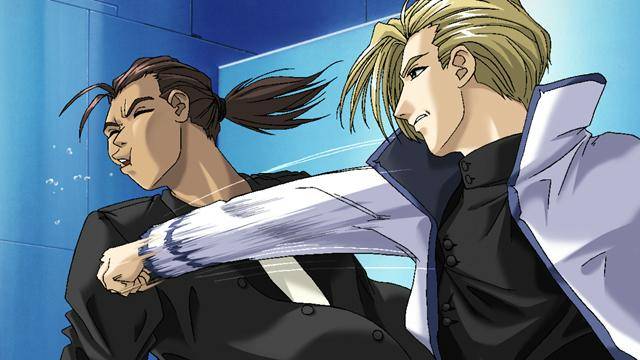 Overall comments: luv wave suffers from pacing in the first half of the game as after couple action events there's lot of walking and rounds and gathering information. Mamoru is getting us information about "9 heavens" drug and Macy Specter from public security database, Yuri deciphers stolen data during hacking session and later on she participates in creating anti-XINN vaccine and secretly sends us information about it. Kiyoka introduces us to the world of drugs and also gets us to know Digital Demand Inc. president. Diane is the president that's in the epicenter of events. Little by little every lead and thread comes together and we get the full picture. I actually prefer this approach to forced action line, so pacing was ok for me (even though I got stuck several times and had to bruteforce commands). After we get to conclusive final of the story it does not really stop there. It presents the past of both Alice and Kaoru in a mindscrew fashion. That's a very different story of the main plot and not less thrilling one. It looks like a huge mural with small threads being knit together all the time. There's no answer to all the questions and in this case it's not particularly bad - that creates the mystic aura about the game. We get to know the past and the present, but as for the future - we need to remember it ourselves. It's a solid cyberpunk story akin to Ghost in the Shell and that alone should be enough. It's also full of memorable characters that don't fall under some categories - they are unique parts of one big story. I'm not sure I grasped everything I could from the game so I'm going to rewatch some dialogue scenes. You can do the same with my video playthrough.

Hello, can you tell me, how to install the game?
Thank you.

I remember that I played DVD version, but not the technical difficulties. Installed normally for me. I might use DxWnd of older version to launch the game in window for recording, though.

Hello again, when i click luvwave.exe to install it says "spoolss.dll+japonese-text".
What should i do?
Thanks again.

The only thought I have is that you're not using Japanese locale at Windows.