Foreword: Every time I start a slice of life charage I really want to like it. But too many companies follow the same trends and present the same product. For praising reviews please refer elsewhere 1 2 3 4 5 6 7. 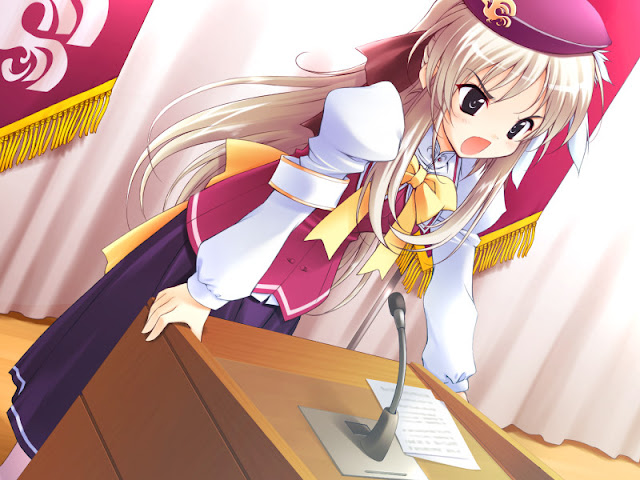 Synopsis: Tsukasa starts to work at a girl's high school after graduating from university. But the school is located at the edge of peninsula, no house around. On his first day of work, he gets out of a bus and walks to the school. And he is surprised to see the school building, a huge western building. Soon after he knows several facts, that this is a branch school, and students are isolated from society for personal reasons. He doesn't know them but it's too late. His life as a teacher starts...

There are so many English reviews that I don't need to elaborate on details. My personal impression is pretty bad, far below masterpiece level. So I'll just ramble about things that worry me here. 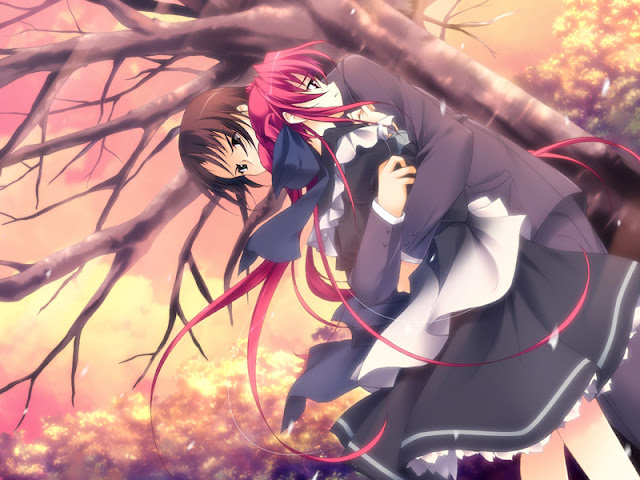 The biggest mystery for me is some super-positive reviews and great overall score on VNDB and EGS. EGS gives overwhelming median value of 85. The majority of votes on VNDB are for the 9 score followed by 8 with a narrow margin. But let's look at actual reviewers scores from reddit. Out of four reviews there three readers give 7.5 score and one gives 7/10. There are also very critical reviews like these ones (1 2) What's going on here?

The answer is hype. This game won the 2007 Bishoujo Game Award as the best pure-love genre game among the voters. But Japanese readers read the game in original and understand all the details, so they can't be wrong, ne? But reality is very different. I noticed it on multiple occasions in the past that Japanese readers don't understand shit. They constantly obstruct plotge and adore moege. They are the real destructive force that turned industry in a moege fest. And I see three reasons why this particular title has such good votes from Japanese readers. They are... 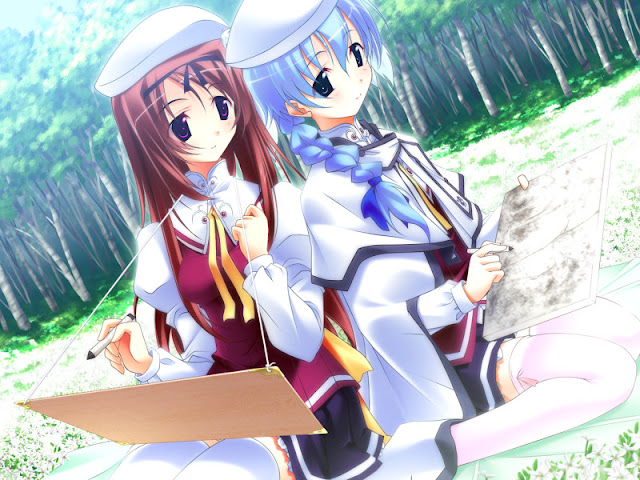 Lolicon, teacher taboo, sex tilt. Basically, a seemingly traditional pure love game becomes a cradle for multiple fetishes that suit nukige much more than a normal bishoujo game. Seriously, do you remember any other bishoujo game before 2006 with teacher at all girls school as a protagonist? Any sexual relations with students are immoral, but here all the heroines are students and all are active participants in sexual relations. Some heroines might look more or less mature, but some like Misaki are absolutely childish. And by some twist exactly our lively prankster Misaki is a sex-addict in a very late stages. Her route has like six H events or so (I did not bother counting), but here is where our final trait starts to shine. H events in this game are colossal by length. Last time I remember something like that was Tsuyokiss. And by a sudden twist of fate it's yet another title super-popular in the East and moderately unpopular in the West. In both these games H scenes don't exist as isolated skippable pieces at the end of the individual routes. Instead, they start at the beginning of individual routes and take the majority of the route time only occasionally being interrupted by conventional life events. Moreover, these scenes are interrupted by dialogues and then continued again very often. So H events pierce the whole reality, they become the reality substituting any school life. School starts to be treated as just another place to have sex among many others. It's tiresome to edit such routes because every time H event seemingly ends, it may either continue after couple minutes talk or new event starts in couple minutes. So there is always a dilemma to cut this whole mega H event taking majority of the route or cut actual action with leaving midterm dialogues - and in this case there would be too many cuts with too many skip scene notice displayed. 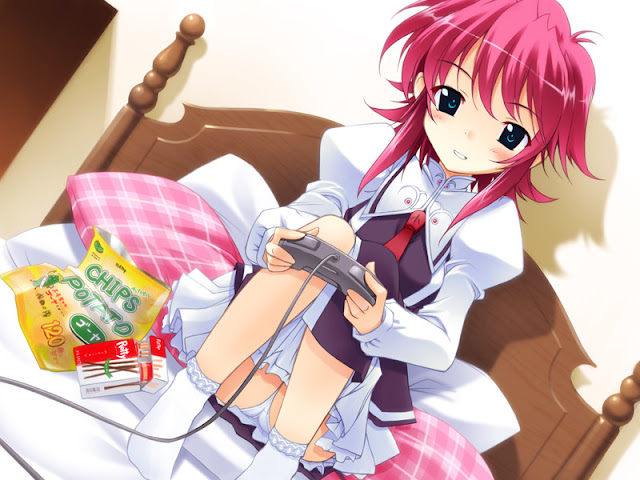 But there can't be everything wrong with this game. What's good about it? Actually, there are two games in one here. I don't care which of two writers wrote which routes, but it's evident that one writer wrote Miyabi, Tonoko and Shino routes while the second one those horrible sex-tilt routes of Misaki, Sumika and Yuuna (Yuuna route to the lesser degree as there only some three H events). First three routes are traditional ones - short, relatively fun and with just one short H scene in the end. And exactly these routes are usually positively assessed, especially Tonoko and Miyabi ones. I played Miyabi route as first one, and it was of masterpiece level due to two reasons - natural continuation of common route, plus tsundere personality. Common route is the most important and often most entertaining part of any game. And in Haruka ni Aogi common route is all about chibi principal Miyabi. Most of jokes are based on her tsundere behavior. So her individual route is almost same funny and pleasant. Tonoko is kind of main heroine for those who can't stand tsundere and like serious girls with good personal stories. 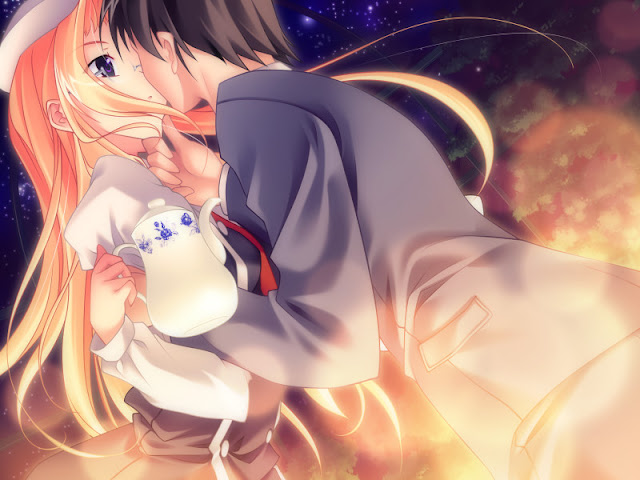 So this game is very controversial. It tackles dubious theme of love between teacher and students very differently in first three routes and last three routes. And while first three routes make up for a touching school love story, second half of routes should just burn in hell, seriously. And another proof of that is the stalled translation project. Three normal routes are translated in a flash, and last three are so weak and H tilt that they made translation stall indefinitely. I'd really hope to see partial patch with only normal three routes in it. Misaki, Sumika and Yuuna routes should never have been a part of this overall not bad game. 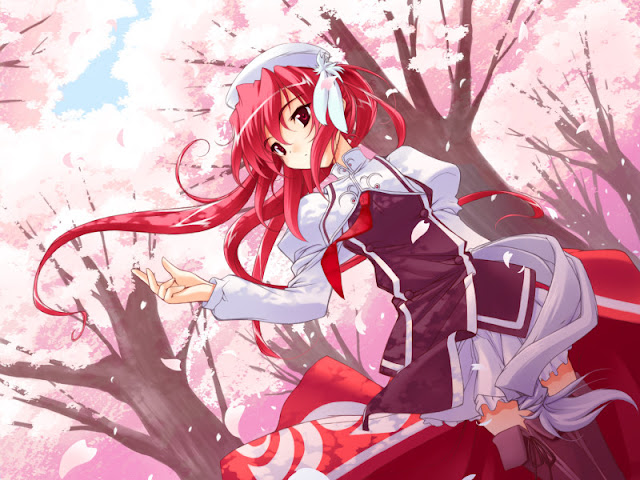