Foreword: All the previous complex meta-textual intellectual novels got the highest score from me. Itsuka, Todoku, Ano Sora ni is exactly this kind of novel. So... is it 10/10 for me as well? 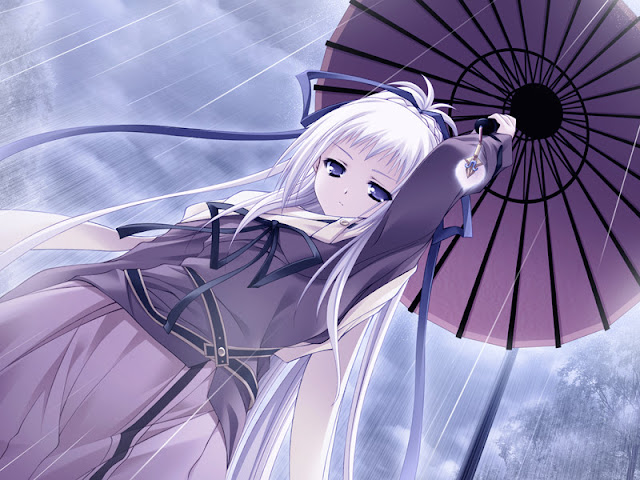 Synopsis: In this town, there are "clouds" covering the nightsky, that the starlight won't even pierce. Because of this, constellations would always be too far.
Born and raised in the Tatsumi noble family, Saku has failed to meet the expectations that lie on every male member of the family.
One day, he receives word from his strict grandfather "to live life the way he wishes." Estranged by his family, Saku travels to the estate of Kuumeishi, a town that has never seen the stars.
He went without hardly making sure of the details of arrangements for a wedding...

There are enough English reviews for this game (1 2 3 4 5 6 7 8) and especially Japanese reviews (1 is one of the best ones). But game has such complex nature that there is still room for discussion. Minor spoilers are inevitable for discussing game concept, but I'll hide big spoiler under the bar. 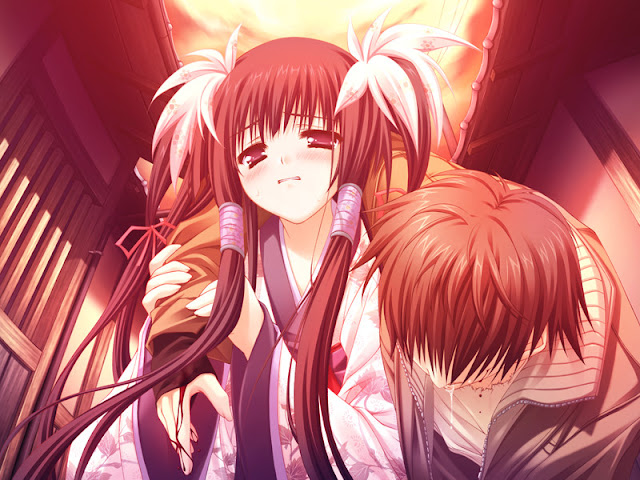 I played the only available at the start Futami route blindly before reading anything on the game... and I did not like it at all. After rather fun greeting of our supposed fiance in this ancient town nothing much really happens for the bigger half of the game. There's astronomy committee at school and Futami who tries to roleplay a perfect wife at home (and she studies at the same school as well). Futami wants to become protagonist's wife and wants his help in ritual for clearing clouds by the festival, and she constantly demands answer, like five times, really. And Saku never gives one. Then I was absolutely pissed by the fact how writer crosses out previous development with just one sentence "And it was the last night before Futami returned to her parents' house". The reason is not explained, and strange scenes start to snowball at this point. Basically, Saku kind of continues to live alone. At this point he is visited by three girls frequently - Mememe, Konome and Asuku San - and it becomes the fork for the routes to initiate. Then there's sudden burst of conflict with many antagonists showing up, and everything loses sense almost completely. There are constant time shifts, recollections, recollections inside recollections and what not. It gets really messy instantly followed by battles and really unsatisfying unification with Futami under weird circumstances. I'm telling all that just to say that first playthrough can be really bad, it's normal. Game still managed to rise from 6/10 to 9/10 somehow. I'll try to explain how. 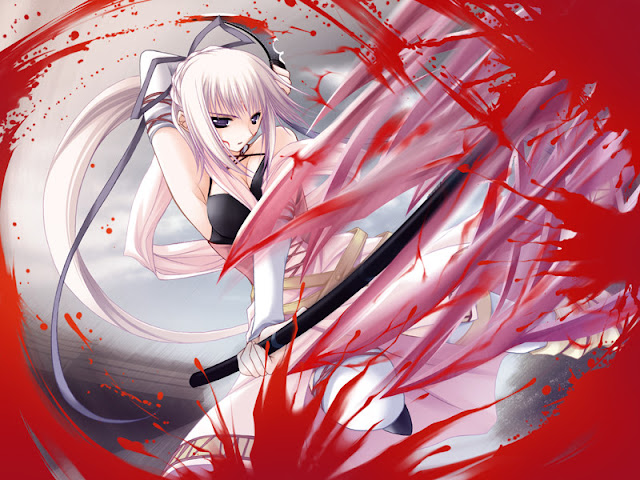 So the concept of all routes turns out to be slightly different. This town is ancient town of several  mighty clans dating from Heian period with heroines belonging to different ones. And these clans have both powerful warriors and magicians. A very important day approaches, so in each route protagonist Saku has to deal with the clan of route heroine. Problems and antagonists vary greatly for each heroine, so each route manages to provide an absolutely fresh experience. Concept looks much simpler now, but only because I try to simplify things on purpose. These clans exist at the same town and have a mutual co-habitation history. It means that in different routes all the heroines and sub-heroines and even lots of antagonists act simultaneously, and these arcs intersect. Positions of these clans are absolutely different, hierarchy and heroines positions are absolutely different. Even the purposes of clans are absolutely different. There's a lot of infodumping to chew. 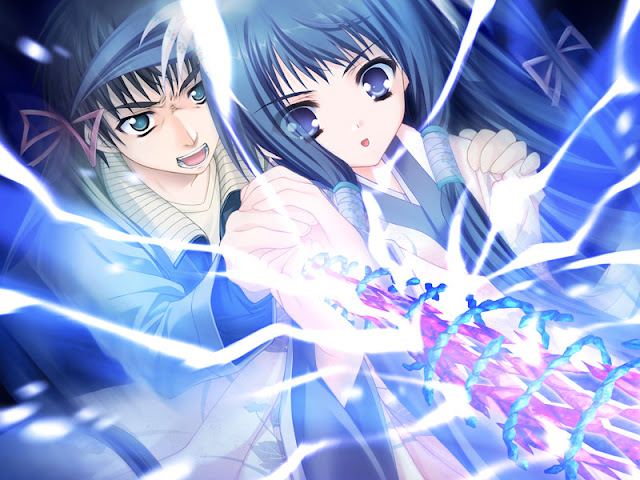 And after all three routes are finished another small story shows up which actually puts most of the dots at the right places. It explains both the origin of this town and clans, the history behind most important personalities, the ritual day and even role of Saku. It's a very strange structure where we get to know what the game was about after game is actually finished already. But this move gives incentive to recall or reread parts of heroines routes that made little sense beforehand. And it actually gives room for theory-crafting. My insight is under spoiler.

In Futami and Konome routes heroines manage to survive and make their roles fulfilled and promises realized. Asuku San route is twice shorter and it's about her riot and killing pretty much everyone from powerful clans. The short after-story is the story about Scandinavia god Odin's conflict with humans where main motives are "rage" and "anger". So what I imply here is that Asuku San route is the true route, and that's why it has that much common ground with after-story. I consider Futami and Konome routes to have only bad endings, because both of the heroines are sucked in their roles too deep to be able to break through. As Gozen says about Konome, the princess was fed with poison from her birth. It's not poison literately, but Konome was brought up as hope for her clan and the most powerful sorceress. And her life is full of respect of her clan, duty before the clan and constant stress about not being able to help the clan (she can't use her magical abilities, but I won't disclose the reason as it's not important for my reasoning). Absolutely the same can be said about Futami. She's the most powerful member of her clan after grand-mother, but her power is spiritual and not applicable in real life, so her full ambition is driven for Saku, to become his wife. Incidentally, Saku also has only hidden power, so on the surface he is the weakest member of the clan. So, this town with ancient clans squabble and curse of the ritual done once in 100 years is basically the same stage as vikings life with their cursed Gods like Odin and constant fight among themselves and with external forces. I see this ancient Japanese town as image of whole post-Heian Japan with intrigues and competition among many forces. And Vikings were luckier in this case. They became the external force that conquered and more or less united England settling there. But Japan had nothing of the sort and the hell of internal conflicts continued till capitulation in the second World War. Even with united state rulers could not break free from militarization curse, this rigid hierarchy and rough life. What I see in Futami and Konome routes is reproduction of the same sinful cycle. Heroines were able to realize themselves inside the hierarchy and found their place there. Nothing got changed, and this town without any modern technologies continues to thrive in the era of mobile phones (as Suku has one when he comes to this town). Everyone in this town is narrow minded. Except Asuku San. She monitors behavior of major clans and wants only one thing - to escape. But her sense of justice does not allow just to flee. Escape for her is inevitably linked to liberating this town from the lingering past. This anger and rage are directed at pre-War Japan. I like this game exactly because its concept and ideas provoke discussion and thinking. 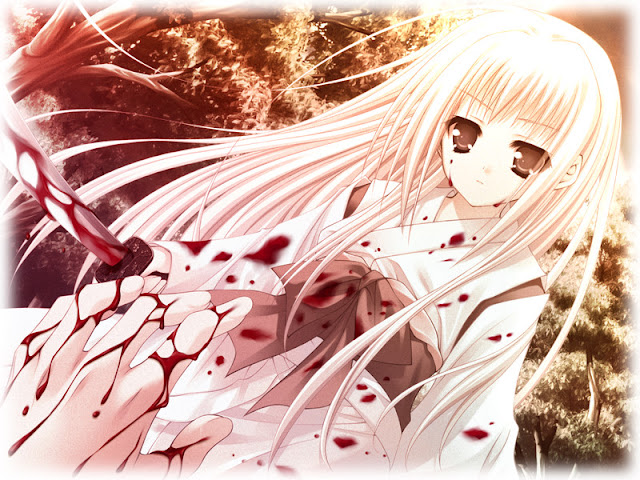 Itsuka, Todoku, Ano Sora ni is a complex meta-textual intellectual visual novel. But why is it just 9/10 for me? The answer is because I did not really like the process of reading it. It's basically mindscrew where nothing is explained until the end and you are hit in the head over and over and over. But I really appreciate direction, text, concept, attention to details and discussion that it provokes. It's not a natural masterpiece, but an artificially kneaded one. The process is not really good, but the aftermath is. There is a feeling of accomplishment afterwards and recognition of something absolutely new done within a scale of visual novel. That's why I can't really recommend it. But if you read all this and still want to read it - it's worth it, at least for the after-taste, but it will be anything but easy. 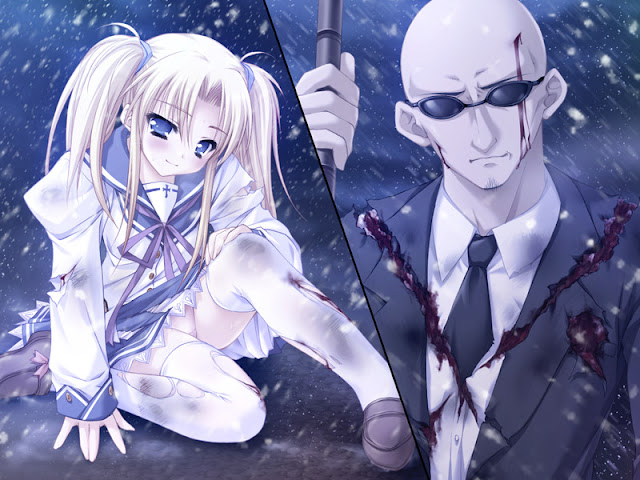 So, what is actually happening here? The after-story, what does it tell us? Asuka San has her killing the major clans?

A summary would be nice.

Afterstory can be rougly divided in two parts - one for past and one for present.
Past is about Norse God Odin defeating numerous beasts, but having his spear Gungnir break down when fighting Futami's grandma Ii Shizuka. Pieces of spear get stuck in different girls.
Present is about Odin managing to defeat the Wolf who wants to eat the moon and thus prevents Ragnarok.

I see, so the Afterstory expands on the true route or something. There are three routes, plus the afterstory? If Odin defeating the Wolf in the presents prevents Ragnarok, what happens to the other characters? They're well?

This afterstory is very short (some 40 minutes on autoplay), and without any character sprites or CG. It does not tackle fates of any game characters. Afterstory literally ends after Odin admits that Saku is the person to change the world, so all Odin can do now is defeat Fenrir and prevent Ragnarok, and the rest depends on Saku. So Afterstory is actually more correctly to be called "prestory". And three routes are the outcomes that Saku chooses for this saved world.

I see. The three routes, two of them basically have the heroines of those routes get together with Saku to have his child? They are what he chooses to change this world? I wonder about Asuka's route and what that's about? A summary of that and the other two routes?

Itsusora is an extremely complicated read where some elements only become evident from the second read. I only read it once, so you'll have to get by Japanese readers analysis http://www1.odn.ne.jp/yukyu_wod/analysis/itsusora-analysis.html