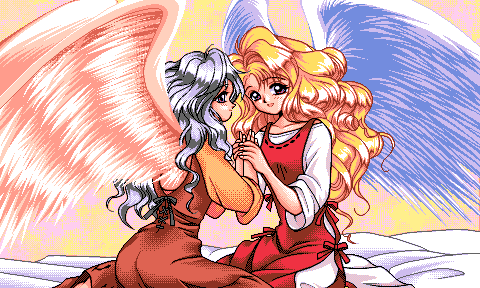 What a tiresome year. First Windows year had too many obscure games with tiny bits of information to get. Crude graphics, bland plotlines, typical dating sim gameplay. But all in due time.
Let's prolong the chart.

Numbers don't show anything extraordinary - a very mild logical increase in numbers. Shift to Windows has not had an influence on the quantity so far. As for the quality, that's another thing.

Let's see what year 1996 brought:
There was no major game in 1997. You cant just say "1997 year is X". Pia Carrot 2 is probably the closest one to a major game. It sold the best, but it's hardly a masterpiece, just a game with the best production values. Let's count the masterpiece level games of 1997:
Not bad selection. What about Canaan? It's a continuation of the most heartwarming game of 1994, Gao-Gao 3. If there was no Desire the same 1994 year, it might easily become the game of the year. Cannan is direct continuation of Gao Gao 3 which means it automatically inherits the merits of part 3 and adds new development in the story as well as a new hero. Yes, it's PC-98 game, but after year 1997 I'm starting to think that PC-98 era was really cool. And in order to share this wonderful experience of Gao Gao 3 and Canaan, I've made video playthroughs of them. The game of the year 1997 is Canaan ~Yakusoku no Chi~.