Foreword: The culmination of the series and the biggest jewel Four-Nine ever produced. I'm late with the review since I wanted to finish video playthrough first. 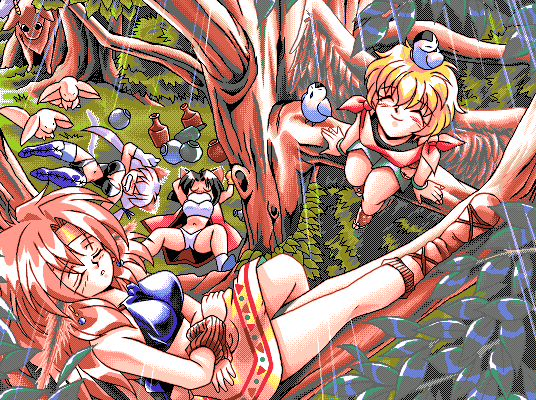 Synopsis: The fourth entry in the GaoGao series is set in the same post-apocalyptic world as the two previous games. In the future, a failed biological experiment caused widespread mutations, leading to a total separation of human civilization and the mutated tribes of "animal people". The events of the game begin shortly after the end of the previous installment. Human civilization is nearly destroyed; the remaining humans live in shelters, dreaming of the "promised land" Canaan, somewhere "near the end of the world", where there is enough food for everyone and where mutants can't enter. The game has two protagonists: a human boy who has lost his parents and who swears to himself to find Canaan, and Wolf, the mutant hero of the previous game, with his colorful female companions. Eventually their paths cross - but will they able to understand each other and bring peace to the troublesome world?..

Structure: 29 parts overall varying in length from 3 minutes to 2 hours.

Difficulty: Easy and even easier than in before. No need to bruteforce all the commands to advance, dialogues are enough to proceed usually.

Rating comments: All the shortcomings of Gao Gao 3 are eliminated here: no more command bruteforcing, optional (and less painful gameplay-wise) H-events, story is not bounded to a strict structure, but feels as a natural adventure. I can't put 10 for quality since it's PC-98 game with no voicing, but besides that just perfect. 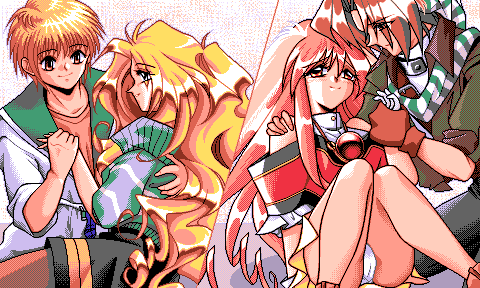 Protagonist: Same Wolfy boy (we're given official English spelling in the credits like that), but now also with a human boy Kite moving elsewhere in parallel with paths joining only by the end. Wolfy is same cool and optimistic person, but what's nice - there was a chapter of total despair even for him - that was a welcome character development to see. Kite is pretty much allusion to Gao Gao 2nd part protagonist - human boy who wishes to protect those he loves but fails to do that due to lack of power. "I want to become stronger" is his motto, but unlike part 2 here Kite actually becomes strong and at some point even assaults enemies on par with Wolfy - that was also a satisfactory character development. 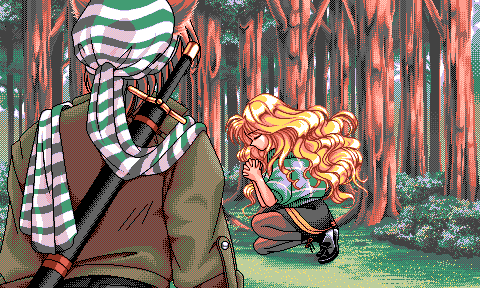 Characters: I've counted 25 humanoid characters in the game, aside of definite side-characters. Only four of them are males: Wolfy, Kite, Blue, Pr.Kayne. All the allies migrated from Gao Gao 3rd safely with some new ones and old acquaintances. It's enough to mention that there are as many as 12 people in our party at the time of the final battle. Just as in Gao Gao 3rd whenever you meet some new person, a long quee of questions to him follows, so every character is very well depicted as we get to know their past, their status and their wishes. This way is much better than having lots of mystery characters and getting to know them bit by bit by their actions. 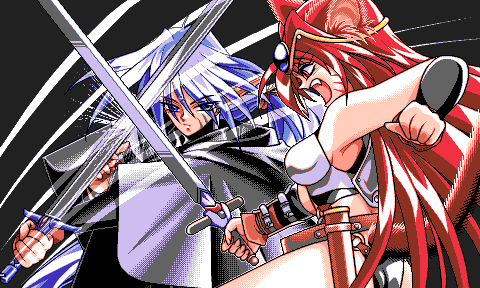 Enemies: are very cool. There are more guys with advanced tech and guns, there are robots, new war modified mutants. Just as before, human enemies are possible to negotiate with and 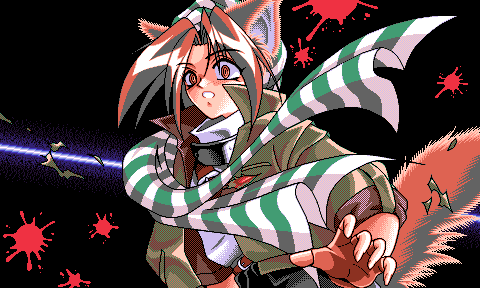 Story: Kite is a boy who lives in one of the sealed shelters and one day sneaks out from there to try to find Canaan - the best place for people to live - he read about in the books.  Wolfy party gets out of the Underground this time and walks the picturesque landscapes. At some point they find Kite's shelter, read his diary and burn up to find this land of prosperity Canaan as well. Kite saves a girl Angela from the crashed helicopter and they go seeking her "Fur", someone very close to her but unable to remember because of amnesia. Wolfy party finds the angel/bird girl Fur in a different crash place and she needs to find Angela. Soon Fur gets kidnapped and the story slowly, but surely unwinds. The biggest part of the story takes mutual alienation of mutants and humans. And only little by little, one encounter after another both species stop thinking in black and white terms. 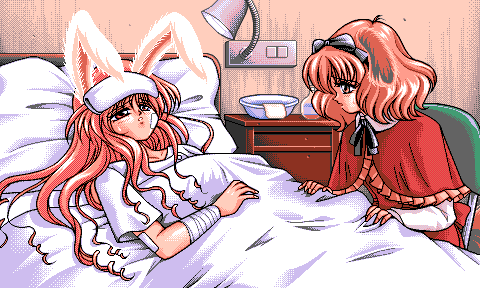 CG: There were much more CG compared to 3rd part. They are of better quality and overall make up for the rich story feeling. A lot of backgrounds are reused from 3rd part, but that seems natural as it's the same underground everywhere. 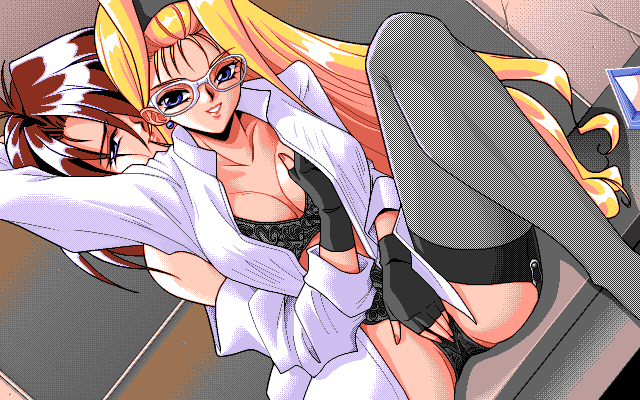 HCG: I'm pretty sure there are less H-events than in 3rd part and all the female characters excluding only some enemies get their own HCG. But what I really liked is that there are only two compulsory events with Rabby in the beginning of the game and in the end of it and one compulsory event of Kite with mutant girl Mira. Mira is by the way one of the main characters this time, party of Kite consists of three persons usually: Kite, Angela, Mira. Optional H-events helped me to concentrate on the story and build up more empathy for the main characters rather than struggle through all the side-character pretty random and not important H-events.


Sound: Only couple of old bgms migrated from Gao Gao 3rd and those are generic battle ones. All of the important battles, events and just actions have new much more elaborate midi melodies, which is really nice. 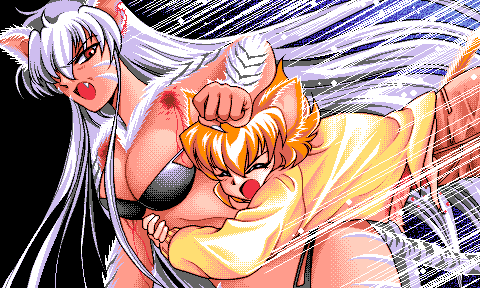 Themes: Most evident theme is definitely of Canaan. We tend to ask about Canaan every passer-by with both protagonist. What's Cannan? Will we be able to find it? See it for yourself, but the answer is very satisfying. Another interesting Canaan side-story is that of Pr. Kayne - but I won't spoil it here.
Another theme is that of coexistence. In Gao Gao 3rd there was not a single living human - only one human spirit Saison, but that was snobbish pc room maintenance specialist and he openly declared that mutants is the lower life form and has to be annihilated. By the start of Canaan both parties are ready to kill the other species enemies on spot and it takes a lot of effort to overcome that feeling. It starts from simple - "They can also be sad and cry" and goes all way through.
The third important theme is that of creators and creations. Are we responsible for life of those who we created? Should we treat them as luggage and just make another clone instead? This theme is covered mostly by Pr.Kayne sideline.
Another one is that of the reason of life. There are some suicides in the game and the gravest events happen because characters lose the reasons of their lives. Is it worth it to live on without the reason of life or is it possible to find another reason? Those are the questions raised.

Originality: Since it's direct continuation of Gao Gao 3rd there's not much originality here. But double protagonist story lines is a fresh move which really helps with the information overdose in the beginning.

Humor: I absolutely love the humor here. The old jokes don't have a strong presence, but occasionally show up and those moments are cherish able indeed. When a party of peddlers is asked whether they know about Ningen, they first take out a carrot, then green beans and then admit that they don't have any more vegetables reminding Ningen. Hit android with the pie joke is played out pretty cool too and the whole party was shocked that android did not stop functioning after that. The inventor of new meanings is only Iria now and she is hit frequently by Rabby, Leona and Dola because of that. Wolfy thoughts and comments are stingy as ever and the spirits in the party is always high.

Overall comments: This is a very rare beast. A serious grown-up story in postapocalyptic world with the best possible humor, dozens of well-developed characters and many important themes raised. What else can one possibly want? It feels like an epic RPG story on par with Legend of Heroes - Trails in the Sky, but with zero RPG elements. There are other games with interesting stories, but this unique party atmosphere is not to be rivaled in any pure visual novels to come further. 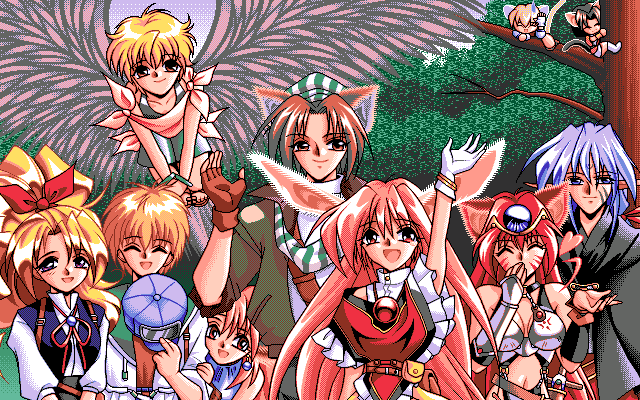