Foreword: If you do not know of EVE:Burst Error, you better stop here right now and go watch video playthrough of that gorgeous game. EVE the Lost One is a direct sequel to that game and there will naturally be spoilers on the prequel content. That being settled - I did not pay much attention to the Lost One right away and did not review it properly while observing year 1998. Japanese reviews failed even to give an outline of the plot and were generally not too favorable. Only after playing it myself I found out the perfect answer "why" and that will be covered below.

Synopsis: 3 years after EVE:Burst Error. Prisia is the new queen of Eldia but her rule is challenged by radical nationalists headed by archbishop. Marina retired from investigator duty to become newcomers instructor. Kyoko is the newcomer investigator just after severe course of training and her first task is investigating circumstances of death of a young scientist.. Snake is a mysterious figure who is blackmailed to find "memories" of former Eldia king to bring back to life sleeping EVE/Mayako Mido.  Somehow everyone hunts for the "memories" and the truth lies in Eldia.

Structure: Game takes place from June 2nd to June 6th, then from June 9th to June 10th with an epilogue on June 16th. 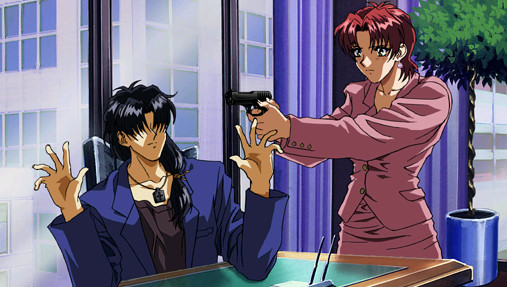 Rating comments: I like it when the game is easy to evaluate. I try to find flaws whenever possible and now just can't find anything. It's not a flaw, but my tiny complaint is that protagonists aren't as fun as Kojiro/Marina pair. Those two were just insanely charismatic. Kyoko compared to Marina is quite a plain investigator young woman and her messy hair really hurt her image. Snake does some very ambiguous action, but overall is not a bad guy - still compared to the endlessly funny Kojiro Snake does not stand a chance. But there is one huge BUT. The japanese reviews are mostly based on the initial Sega Saturn version and game evaluation is average. But Sega Saturn and PC version have one HUGE difference - PC version has Marina route crammed in from June 4th to June 6th. This is a huge 3-hour story that gets all the loose ends together and not only that! Marina investigates together with Kojiro, so we're provided with loads of fun scenes and awesome comments. Marina route flips the table and gets the game from just a good straightforward adventure story category to the perfect sequel and eternal masterpiece one.

Protagonist:Kyoko I already tackled on protagonists in rating comments so will elaborate a bit. Kyoko is ok, she is normal. She is a diligent investigator, but she does not mind quality girl-time going shopping and relaxing idly all day long.with a cup of coffee au lait. Her first case investigating the death of a young scientist gradually reveals that he was connected with the former Eldia mad king "memories" that everyone started searching. She's does not have that much sex appeal, so there are much less funny jokes and commentaries on the way compared to Marina in Eve:Burst Error. To the left of her is Yuji, a quiet student with a part-time work. He only wants a quiet life, but reluctantly helps her couple times and gets involved into a big game facing charges in crimes himself. For a good half of the game he gets to accompany Kyoko, so her side of the story gets a social boost and feels good. 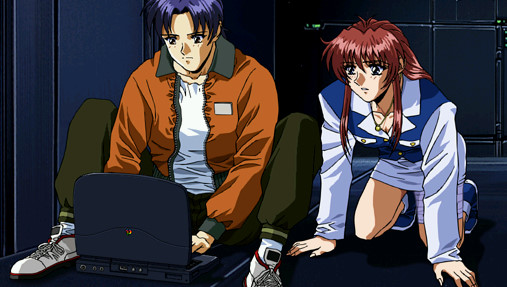 Protagonist:SNAKE This picture is the best view we get of him during the opening and I would not like to spoiler his identity which remains unknown up up to the middle of the game. The first minutes of his route show us how he places a bomb and blows up clothes boutique in a big trade center. How can this monster be protagonist?! But almost right after that we get to know that the instructions to create a hand-made bomb that were sent to him were deliberately diminished the effect with the listed amount. It was supposed to break one chair at maximum. So SNAKE was contacted via pc by some ADONIS who showed him the recording of him setting the bomb in the trade center and blackmailed him into getting "memories" of the Eldia former mad king. It's still very difficult to sympathize with this character since he continues to take some 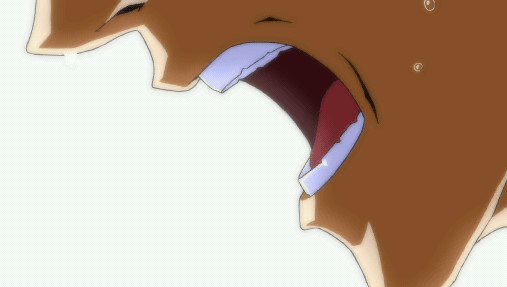 Characters: This is not a galge and there aren't character routes so there's little point in talking about characters individually. At first sight I thought they were overall less likable than those from Eve:Burst Error - it has very cute Mayako, libririan girl, young Himura, affectionate Yayoi, mysterious prime-minister Lloyd. Here there are less characters, but they are shown in development and gain lots of appeal as story unfolds - bartender student Mina, alcoholic Monica, Rena and her president mother, turned on dolphins Ayano, ever-young Natsumi - they are all a curious bunch. And of course the game shares a good number of common characters like Chief, Himura, Prisia, EVE, crazy ministry supervisor woman. They create a pretty cozy atmosphere. 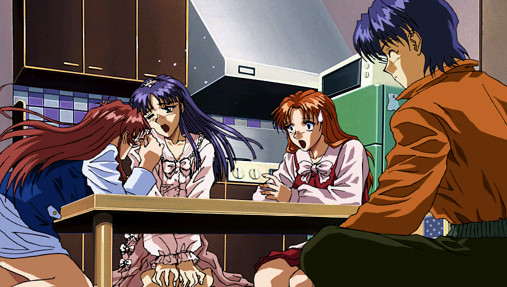 Story: That may be considered a spoiler, but I'm going to draw a very faint structure of the work since I failed to find it in japanese reviews. Game is roughly divided into two storylines. The first half is about finding "memories" and discovering why everyone needs them (there is more than one reason, actually). The second half is three days after first story is over. It's about the sudden spread of biological infection all over the world and the key points here are also Japan and Eldia. Both stories are closely connected and second story relies heavily on the events of the first half. And in PC version there is also Marina story which takes the last two days of the first "memories" story. Marina and Kojiro get to find the real culprit over the caused crimes and even investigate the studies that laid foundation for the events in second story. Without Marina story it would not be really a coherent narration and I can totally understand Japanese reviews based on Saturn version.

CG: I've checked all the CG again and - surprisingly enough - there's ain't much to show since most of those 150 CG are for story related events or items rather than for characters to show off.

Sound: Everything is voiced except for the acting at the moment protagonist. BGM is very good.

Humor:
Actually, there's not so bad humor in here not even counting Kojiro funny streak. Humor is event-based and this type of humor I find the best. So here are the three occasions that come to mind. Oh and I did not find not a single Bill Clinton joke here! That's an accomplishment in itself! (Those who played EVE:Burst Error will get what I mean).
1) At some point of the story Kyoko has to hide, but she's greatly disappointing by the fact that her friends drew a beard over the wanted posters. 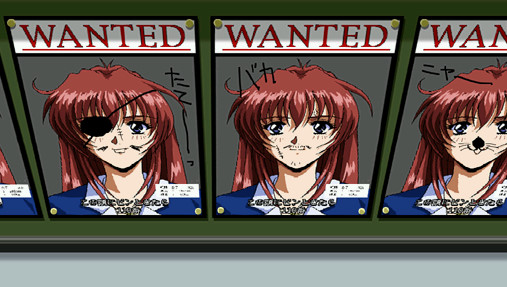 2) There's a small serious meeting discussing the ADD project and how it gets into effect. Yuji who is not strong into genetics adds the bottom drawing and when he's asked what it means, he answers: "anus". It was very unexpected ease of tensions and that's why it was pretty great. 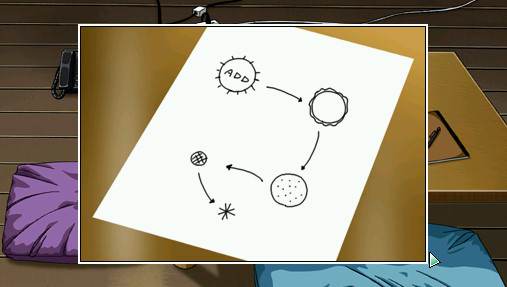 3) Only the dolphin saw the criminal and it's invented how to transform dolphin thought impulses into an image to the fax (PC-98 game My Eyes! nervously smokes in the back). Now the dolphin lies in the bathtub and here's what we get when he ask him to picture the event he recently seen. Just awesome! 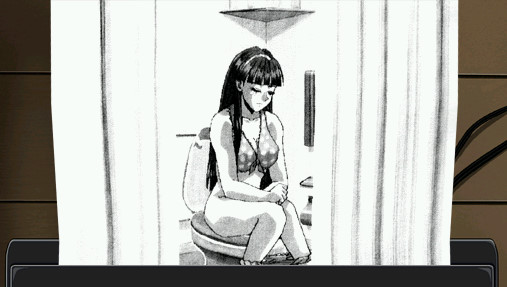 Themes and symbols: It's more of a straightforward game that tries to explain everything under the question so that there was no afterthought behind.
- One of the strongest motives of the game is that of the sacrifice. Eldia is full of patriots, that's one thing that does not change.
- There's a very nice developed theme of siblings separated in the early childhood.

Overall comments: It's a surprisingly interesting game series full of vivid characters, animations and it's just a really twisted story with lots of deaths. If command selection gameplay looks troublesome - just watch my video walkthrough of the game. I'm really weak to good game series, so I'm getting to the bottom of it. The next stop is Eve:The Fatal Attraction. 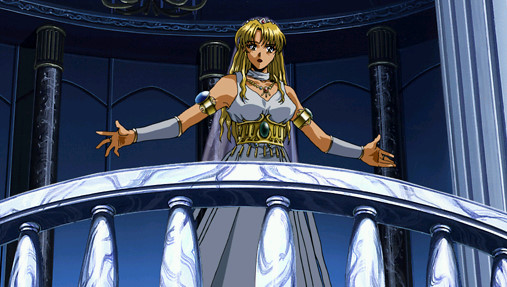