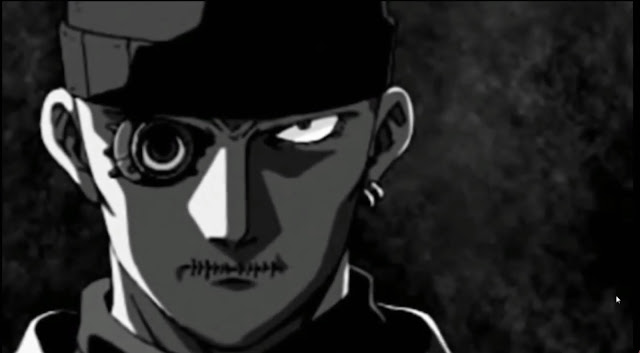 Since there are so many reviews of it, there's no need in full review, so I'm just explaining my choice for this game to be the game of the month October 1999.

The game is painful with a lot of text, characters,  interaction with the scenery, puzzles and seemingly unrelated cases. Up to the middle of it I really struggled through painfully.

Game is about five cases of a heinous crime unit 1. But what's cool about it is that it's not about finding and catching the culprit. Those are just stories that have a beginning and some resolution, mostly sad resolution, actually - pretty much failing the case.

Case 1 is about a swat team being massacred by some legendary criminal Kamui and eventually finding this Kamui as a totally emotionless shell of a human.
Case 2 suddenly shifts the focus to some homeless children who live in the shelters - one of the boys is lost and we discover the story about his disappearance.
Case 3 is about two syndicates rivalry and kidnapping of one syndicate's director.
Case 4 is about illegal surveillance and streaming of private moments of life of a pop idol.
Case 5 returns us to the mystery behind Kamui and all the cases finally get connected into one satisfying resolution.

The gist of the story is presented in a fairytale told by one of characters and since it has great importance and great charm I'm giving the direct dialogue:
- You know, recently... some people say fantasy is like brainwashing. Giving kids sweet dreams for the purpose of controlling them.
- When you put it that way, that sounds right.
- Originally they were pretty messed up stories.
- Like "messed up" how?
- Realistic stories, without all the happy stuff.
- Well, that sure sucks.
- That's why they got turned into happier stories.
- Is that all?
- No. Here's where it starts. So anyways, when I was a kid, there was this fairytale I heard. It's an old folktale from my hometown, but...
- Hm.
- Once upon a time, there was a princess. A beautiful princess. A terrible giant serpent fell in love with her. The serpent ruled the land ... no, he had taken over the land.
- He invaded it?
- Yeah. The serpent turned the king into stone. The greedy serpent wanted the princess... So he took her away...
- Pretty standard shit. Go on, go on.
- Then came a band of heroes. To rescue the princess they ventured to the huge castle.
- Well of course. I'd do the same thing.
- The heroes combined their powers and fought the serpent. And then...
- What happened?
- They defeated it.
- Fuck yeah!!!
- Everything was fine and good.
- Is that the end?
- Well, mostly...
- What the fuck? That's just a normal-ass fairytale. That sucked.
- You liked it, right?
- No, that's no good. There's no twist.
- It's not over yet.
- What?
- Think of the story I just told you. It's been tweaked to make it nice. The realistic parts have been obfuscated.
- Well then what the hell happens?
- The princess was dead...
- What the fuck?! What do you mean?
- She was killed by the serpent.
- Man, FUCK that serpent! The fuck kind of story is that?
- And one more thing... There is no serpent.
- No? Why not...? That stuff comes up in stories all the time.
- Of course there isn't. There's no such thing as a "giant serpent"
- Well. yeah...
- It wasn't a serpent, but a human. The heroes were people, too. Humans killed another human, for revenge.
- That's just a crime...
- Yeah... Fairytales are crimes. The unrealistic fantasy that happens in real life is crime.

Rereading this dialog after finishing the game actually bears a lot of sense, it's the shortened version of the game's theme and meaning. The game does not really tell much directly and there's still the need to think up the rest of it, just like in this dialogue.

Let's get to the bad points. It's long (over 15 hours), slow-paced, low on events. It does not have voicing. It's mostly in sepia tone. Art is of specific and quite shy style. It's quite hard to guess who's talking since you just get the sentences appearing in one window one by one. It has a lot of interactivity. There's one hundred-questions spree with only 10 seconds for each answer and questions are mostly on history-sciences-media topics. Interface and controls are confusing. Dialogues are dodgy and make no sense. Characters treat each other poorly, trade in homophobic and sexist slurs. There are some puzzles. Game can be repetitive - at one case you need to search 80 separate and identical rooms in order to find five items.

Now to the good ones. Game is great because it has cool charismatic characters each with distinguishing personality. Characters-like it reminds me the Unit from Ghost in the Shell the most. The atmosphere is quite like that as well. Heroes smoke, curse like hell and talk in a cryptic way. The dialogues are just awesome with constant verbal abuse towards each other. But as for the story twists and mystery it resembles Metal Gear Solid series the most, as for me.

What makes a masterpiece for me is being memorable, no matter how many suffering it brings in the process - just need to treat them as trials. And there's no need to get tortured - there are a lot of great video let's plays of it without the commentaries. But in the end we get a mature, rich in details story that leaves much for the afterthought and lots of precious memories to cherish.