I don't feel eligible to write a full review since I only listened to the voice parts of the game. And the reason for that is that the game is unhookable by any instruments. No threads are found at all. Still I'm confident enough on the grappled content to write my thoughts of it. 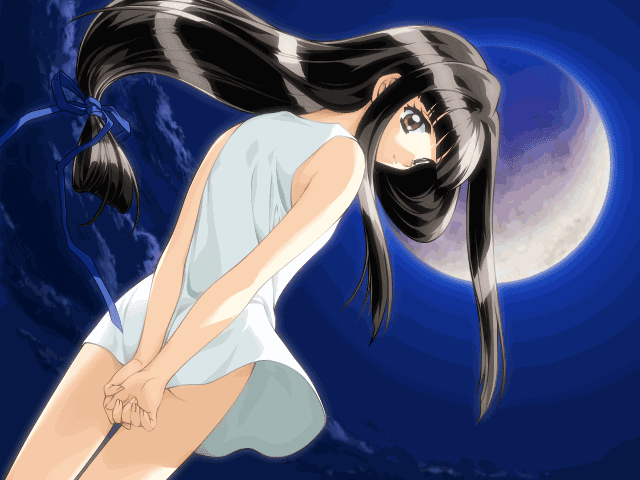 First things first: game has very poor systems.
1) Full-screen only. My try to launch it in window-mode with Dxwnd succeeded, but menu top started to fly separately from the main windows and mouse cursor started being distorted in space so full-screen is the only comfortable way to play.
2) There is no skip function. The closest thing to it is CTRL which draws a full wall of text and you need to press CTRL separately for each such wall of text which amounts to thousands of hits of this key.
3) Sound volume is outrageous. Voice is way too low and sounds and bgm way too loud even when voice maxed up and other sounds minimized. I had to pull sound volume to the limit of speakers to hear voices well, but each time BGM stroke there was a shock feeling. BGM only sounds for one minute and calms down so that minute was the most painful time over and over again. Maybe it was different for win98 but no compatibility helps. By the way, installer only launches with win98 compatibility.
4) CG viewer is one of the worst I ever seen. Out of five heroines it shows CG of two first heroines fairly well and there's the beginning of 3rd heroine and there's no way see the rest with game means.

That being covered you can probably guess my irritation with the game even though the game was not  started yet. But there are some positive sides of the game:
1) Full voiced, including protagonist.
2) Beautiful clean graphics.
3) Good structure - 2 girls available from the start, then consecutively three more girls open up and then there's the true route.
4) Longevity - all six routes take about 40 hours of time to read properly. Let's touch the story a bit.
Matsunaga Yoshihiro is a young man given the task of watching over a group of students from Touyou School on their summer break to a beach. One of the students, Morisawa Nao, has had sadness in her heart from her past - something Yoshihiro can relate to, having his own issues arrising during the trip.
That's the rough synopsis with the only remark that it's for anime made the next year. Morisawa Nao is the main character only in anime. In the game she's just one of five ordinary heroines. She's one of the two started heroines, so I guess she's chosen for the main part in anime since first two days mostly focus on those two starter heroines in game while the path to the next ones is branched off much further. Morisawa Nao is a much better choice over the other starting heroine Iwasaki Chinatsu since the former one is much more attractive and has the most dramatic story among all the non-true heroines.

I don't really feel like covering heroines or even the true route heroine since I like the anime short version much more than those routes. 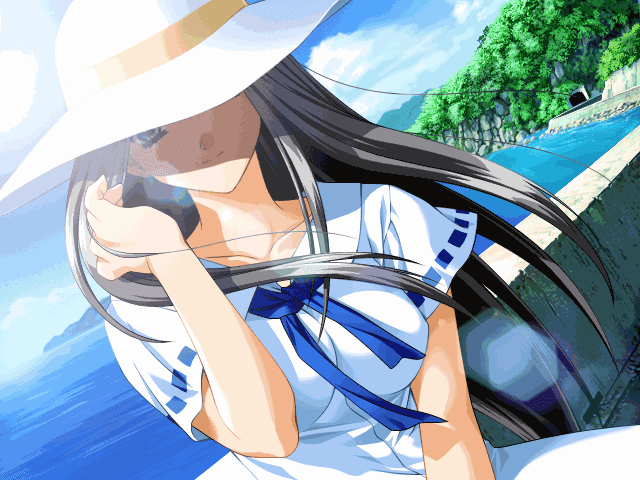 Conclusions.
New Elf is different. Old Elf works were challenging and playful. This work is stripped of any playfulness and it's a mere imitation of other successful nakige with true route structure. Heroines routes are vastly meaningless and only true route has some meaning. The locked forced structure makes us play the same story for six times with the branching only done by the middle of it without a good skipping feature. This monotonous flow is extended to excessive 40 hours without any satisfying conclusion.

Shizuka is the most bashful heroine, but her route included childhood memories scene of her sitting and covering the head with hands while other children get in a round-play and since the exact "Kagome" song from Kazeoto, Chirin. I get that it's not C's Ware that invented the song, but it looked just like a shameless plagiarism to me. 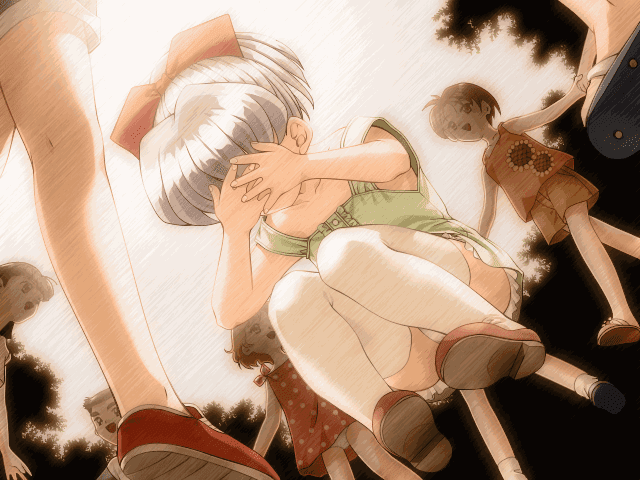 So one more faint question remains - why the hell this crap of a game is VN of the Month November 1999?! Well, with all the flaws of this work it's the modern type work with nice characters and true route. When I look at other November 1999 VNs there are even more irritation factors like SIM, bakage, hetare protagonist, H-focus, shortness or lack of info. Refrain Blue is the only one that's not defiled by those factors. And it's not that bad of a story, just overextended one and lacking in excitement. This is actually the 2nd case after Interlude (2003) where I liked anime version much more than the game. Interlude changed the plot to clear the mess of a setting and Refrain Blue just gathered the most interesting heroine path together with true route, cut everything else and set the table with a nice one hour long work. If you want to taste Refrain Blue, just watch the anime version, really. 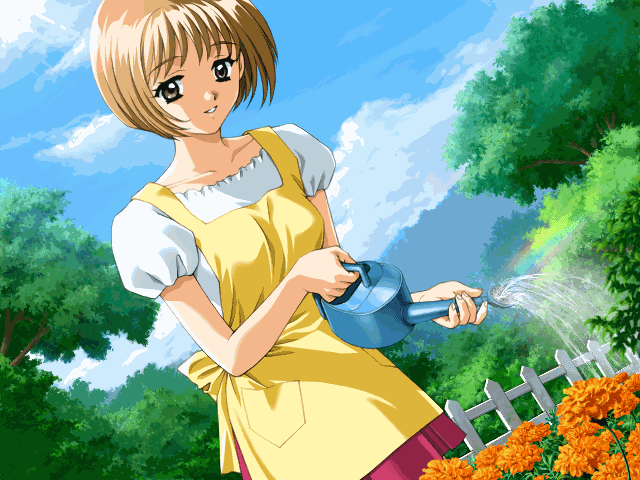 This seems like the prototype of today's moeshit games.