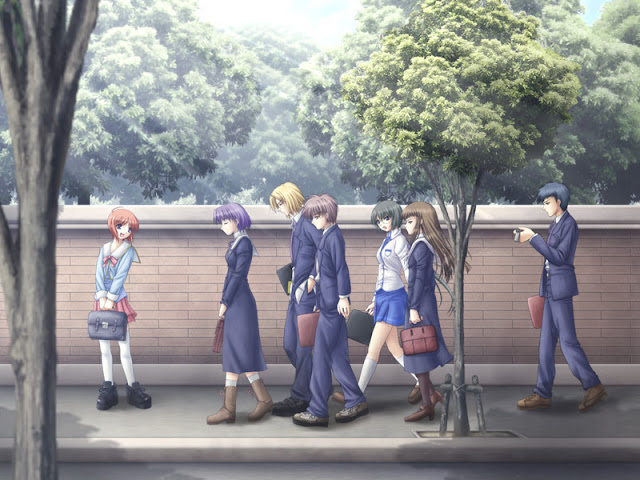 Synopsis: This game tells the story of seven long-time friends. How they grew closer or further apart as they got older. The story is presented using a blog-like interface.
The protagonist, Atemiya Shinobu, who was raised at a certain facility since young, had no one around him that could be called "friend". Being that way, the first thing he started doing after leaving the facility with his sister - Chidori - was to find and make friends.
Benio Azusa, a tomboyish girl who lived nearby.
Hondou Sayaka, a quiet yet sharp-tongued girl who was in charge of raising the pets at school just like him.
Tsukamoto Youko and Itsuki, a pair of siblings who belong to a prestigious family around the area.
Higuchi Shouji, a boy he knew by being attracted to by the similarities they both share.
Izuki Fueko, a girl he met by chance.
Together with Shinobu, they were a group of seven. Just like that, each and every one of them, who had never experienced the joy of having friends, was able to meet each other and become companions. The story begins in a quiet town colored by dusk. Around the seven friends, there were understanding, empathy, conflict, and what's more, fleeting love of adolescence. It was a friendship that could last forever.
Such a simple happiness should have... lasted forever.
That was until the "enemy" appeared.
The "enemy" had disturbed the peaceful relationship of the seven people.
Shinobu could not forgive that. He could not forgive the one that injures his companions, nor could he forgive the one that hurts another one's hearts. And when he realized all that, the world they reside in changed, rather then becoming the new world that it should have... they had arrived at the "sanctuary" instead.
This is a story that describes the heart.
A story that describes the thing located in the farthest end of a heart. 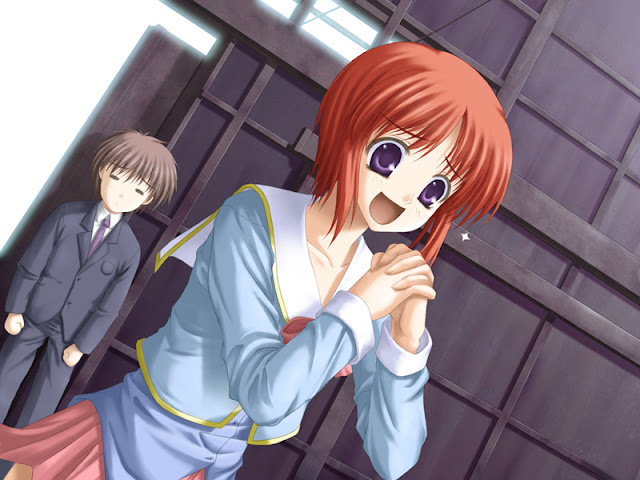 I just can't understand how it's possible to give any other score than 10 if game is played to the end. It's the third philosophical visual novel in history after Kusarihime ~Euthanasia~ and Cross†Channel, and it's just a great human story with the magic of Cross†Channel still present, and even on a higher level since childish pranks don't interrupt serious talk this time. But enough vague words. 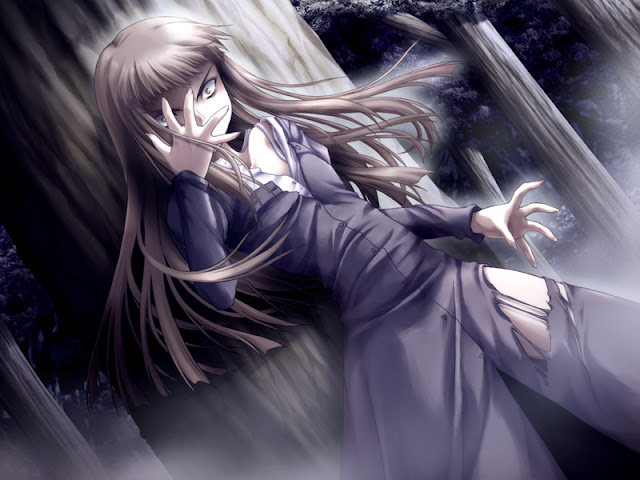 The structure of Saihate no Ima is very simple. There are four girls in the circle of friends - Azusa, Sayaka, Fueko, Youko - and there is a route for each this heroine told in a forced order. In the last Youko route we see a mysterious gothic loli girl Ima who says that Shinobu is not ready yet. And then all the four girl routes repeat again, but with more explanation and depth to the stories as well as the Shinobu mystery. In videos I call this second lap of routes as True heroine routes. After the end of True Youko route there's the True Shinobu route as I call it. It's something absolutely different from the rest of heroines routes. Basically, there are no four main heroines in there, but instead there is a whole new cast of characters. So, there are only nine structural parts in the game. Moreover, True routes generally include all or almost all the scenes from the Normal heroine routes, so I'd advise to skip Normal heroine routes overall and start with True heroine routes if you follow the video. That saves you from the bulk of repetition and allows to have a fresh view. There are actually some scenes in the Normal routes that don't present in True routes. For example, there is a step sister Chidori H scene in Fueko Normal route that does not present in Fueko True route. But it has little influence on the story, so I'd still stronly advise to skip Normal heroine routes or at least watch them after all the heroine routes and Shinobu True routes are finished. 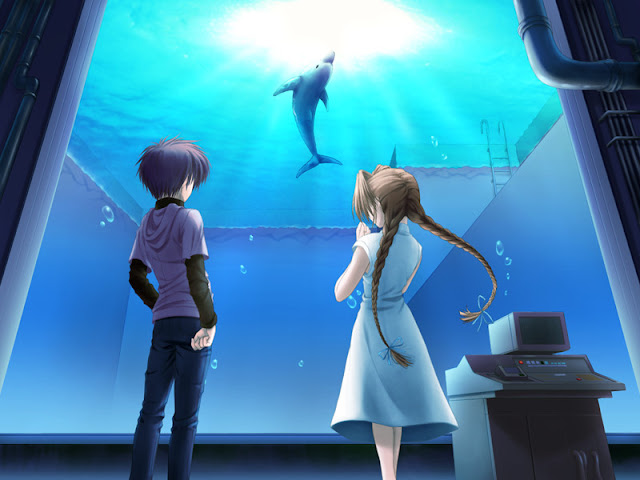 Again, the story is simple. Just mind it that heroine routes are not entirely romantic ones as different killer stories often in the core of the routes. Heroines are fleshed out so well that I absolutely adore  all four of them. Azusa has a perfect buid-up for her story. Sayaka the sulky ojousama really starts to shine in her route. Fueko has that beautiful a-ha effect upon taking down glasses. Youko is actually my favorite character for her sharp tongue and absolutely enthralling voicing that I can't ever have enough of. All the more difficult parts of this visual novel actually refer to retelling the concepts of modern world philosophy related to the core of the game, namely, the phenomenology of Husserl and Global village concept of McLuhan. Basically, all the spoilers of the True Shinobu route are given in the synopsis. This is a story of the heart, and the main mystery is the identity of the "enemy". Pretty much anything else would be in the spoiler zone already, so I hope you see everything with your own eyes. 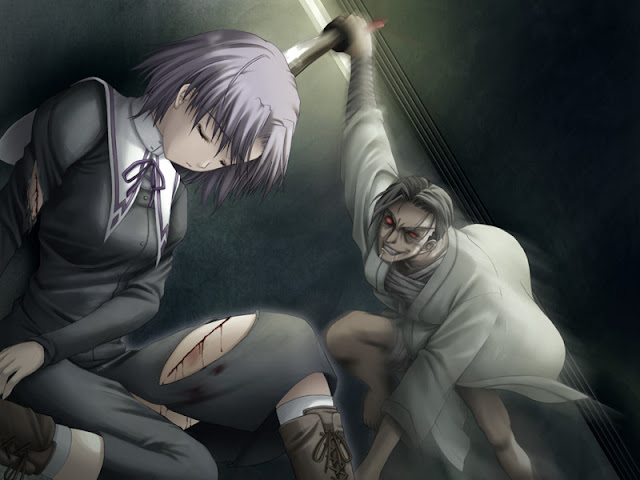 Basically, Saihate no Ima is an eternal ultimate masterpiece that shares the Olympus of intellectual visual novels alongside Kusarihime ~Euthanasia~ and Cross†Channel. Saihate no Ima deserves dissertations written on it just like George Henry Shaft's 160000-word dissection on Cross Channel. From these dissertations we'd be able to discuss the message of the game, follow all the hints and compare all the additional scenes in Normal and True routes as well as clicked links versions compared to non-clicked versions (since there are couple scenes available only when no links are clicked, actually). But unlike Cross†Channel the other two games are not translated, so we'll see none of those, to my great regret. Let's keep fingers crossed, with Kickstarter miracles are possible like the one with Dies Irae. 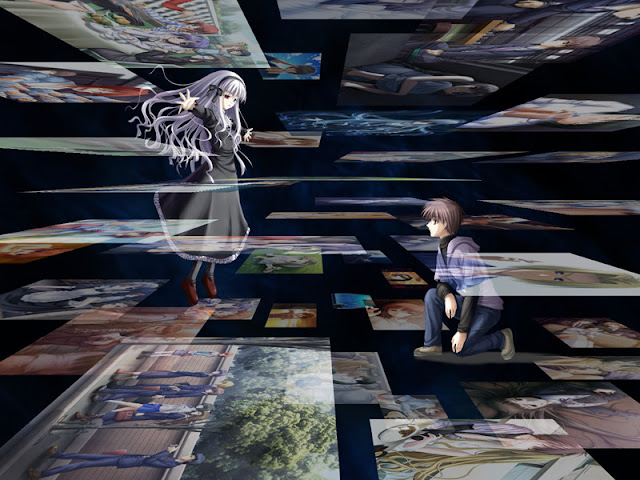 So, the story is a bit confusing, I assume? Does anyone not die then?

Story is very confusing. There are a lot of people dying in different routes, but, as we learn in the true protagonist route, those deaths are not necessarily real. It's not a game about deaths. It's about main mystery and absolutely great characters.

So, these deaths haven't actually happen then? What do we know about the true route, considering its main mystery and characters?

True Route shows Shinobu lying in a clinic, and all the previous routes only happened in Shinobu mind and heart. He searched a way to save everyone and reconcile with himself. It's natural that in clinic he's surrounded by different doctors and patient.s In True Route we get to know the real past and present of Shinobu.

I see, so he's searching for a way to save everyone and reconcile with himself in the True Route. I assume that he is able to see everyone once he wakes up from his coma after saving everyone and coming to terms with himself?

Epilogue after True Route starts with the tea party and happy meeting his old friends again, but then the image dissolves in the sky, and Shinobu starts to live in the real world after getting out of the clinic.

Only people from True Route meet him in the Real World after old friends image dissolves in the Epilogue. I believe that old friends never existed, it's a product of imagination.