Foreword: I actually knew nothing about the game apart of KeroQ background as a company. There's just one review of the game that blames SCA-JI writing as "feels amateurish and he didn't even try to write characters that would feel fitting to the setting" and theory-crafting as "it wasn't detailed or insightful enough to be interesting alone". I'm speechless. This is an absolutely genius 10/10 work and probably the best visual novel I ever read. The only possible explanation for low scores for Nijuuei is in case of playing PC non-voiced version. I have to admit that my experience of PC version was not too joyful either - the palette was too dark and without voicing I could barely focus attention on characters and the flow. But PS1 version was an absolute revelation for me. This review is based on PS1 version of the game (but screenshots are from PC version due to better resolution).
Title: Nijuuei
Developer: KeroQ
Date: 2000-11-30
VNDB link: https://vndb.org/v3856
Youtube walkthrough: https://www.youtube.com/playlist?list=PLs4Gp5VU4Fv-u2aKdRWI13_8zRd71pFKl 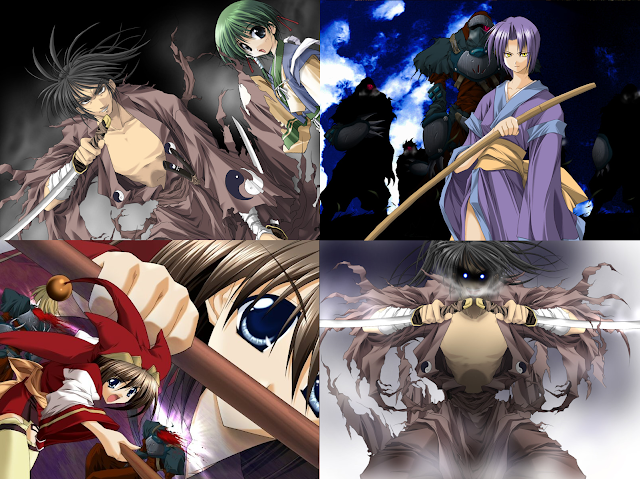 Synopsis: This game that takes place in Japan in the year 1640. The main character is a samurai that got a sword with a blade with two shadows (one with a human shadow and another one from the world of darkness) that connect with him with the world of darkness.
The game begins when the samurai travels to a strange island in which all the children are born twins, he hopes that in that island he can find a cure to his own curse. The adventure starts there, can he come back alive from the island and without his cure? 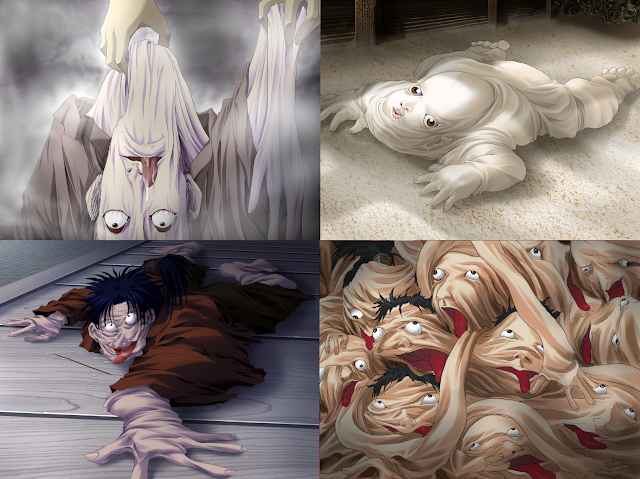 Rating comments: This is a perfect game, thus the perfect score. I adored each element of this game. I'm not giving it even higher score just in respect to the previous few games that I rated as 10/10. Just perfect. 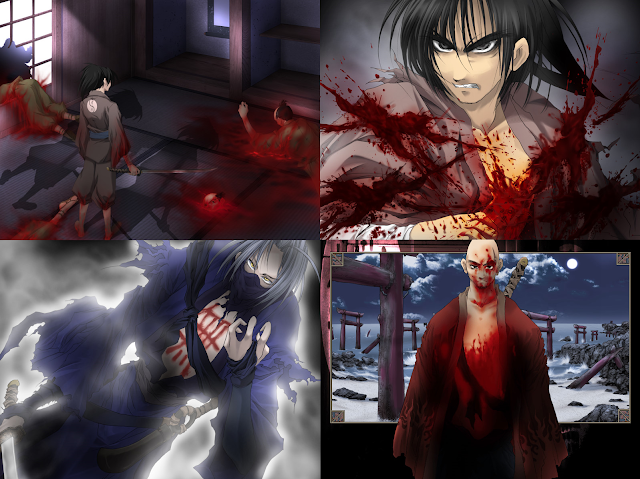 Protagonist: Sougen double shadow is an absolutely awesome protagonist. He's a demon possessed samurai who slaughtered over 200 men and now hunted by shogunate. He's mature, crafty in swordsmanship and very cynical. The first girls he encountered at the island he labled as dimwit, idiot and weak in the head. He can easily torture his opponent, cutting his limbs one by one and then finish him off in the presence of his protesting comrades. We do direct him through the story, but he has a strong personality and acts in accordance to it and not our commands. 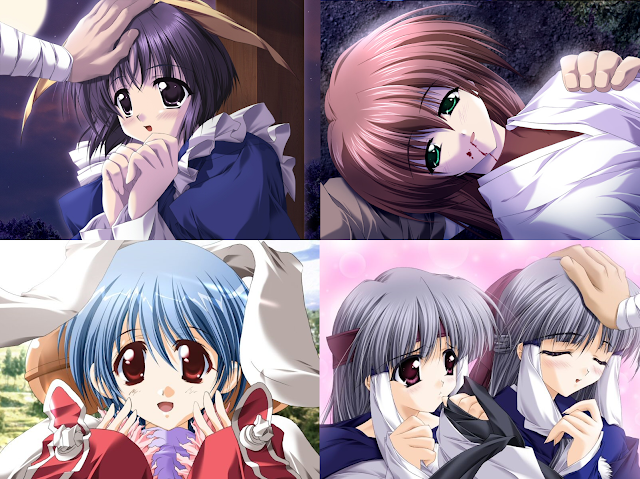 Characters: This is a story-focused story, so there aren't individual heroine routes here, but at the same time even all the secondary characters are depicted so lovely and truthfully that I want to say at least a few words about each character. Three heroines get the ending: Kikyou, Mikoto and Fuurei. But those endings are absolutely the same with only difference in some phrases. There is also a non-heroine ending where we get to insult and kill the chosen heroine for the endgame. It's quite a cool open ending by itself, but its main purpose is just to see insult and death of one of the main heroines.
Il and Sui are the heroines that feature on the game's cover, but they don't have their routes or endings. They are just mysterious twin shrine maidens who have spent all their lives in the same room. Il is the more serious one and Sui is more of a kid. Sougen amuses them with his stories about the world, and they become good friends. Together Il and Sui symbolize purity and their connection with the deity is most important for story purposes.
Kikyou is a female bodyguard of Il and Sui, as well as their whole Awajike family. She knows a lot about the curse of the island, but unable to do anything about it, so she's ready to protect Il and Sui against everything (even Sougen) until the very end and meet a honored death in the fight.
Mikoto also protects Awajike family, but she got the ninja training from outside. She's very embarrassed of her outlook and bunny ears, but claims that she got that outfit because her mother was representing the techniques of the zodiac sign of the rabbit. Mikoto is very fun to tease. Her weapon is very mysterious and cool and thus only fits in a huge box that she carries around her shoulder.
Fuurei fights with a quarterstaff. She has he outfit of a jester. Fuurei comes from a poor family and that's a good way to tease her. She's got the coolest voicing among three main heroines with endings.
Mai is a mysterious small girl who stays at the island even after evacuation of all the islanders. She always is in the mids of some job like counting clouds or waves... a weak in the head child... or is she?
Sae is the maid of the Awajike family. Her voicing is absolutely genius and she has some of the best and funniest dialogues lines in her scenes. Character-wise she's my favorite heroine, but - alas - she has no ending of her own. But if you flag all the scenes for her, her female master Shiho is going to punish the servant for paying too much attention to one guest...
Houjou is actually a boy, but he's voiced. He is not one of the main characters, but he gets his pretty fun ending, the only one among the secondary characters. His main theme is that he lacks talents, but is very diligent - he's always looked down by his comrades and superiors.
Aya is a nice bodyguard who has only episodic appearance, but there are still enough dialogues and scenes with her that make up for the culmination of her story, which is very impactful. 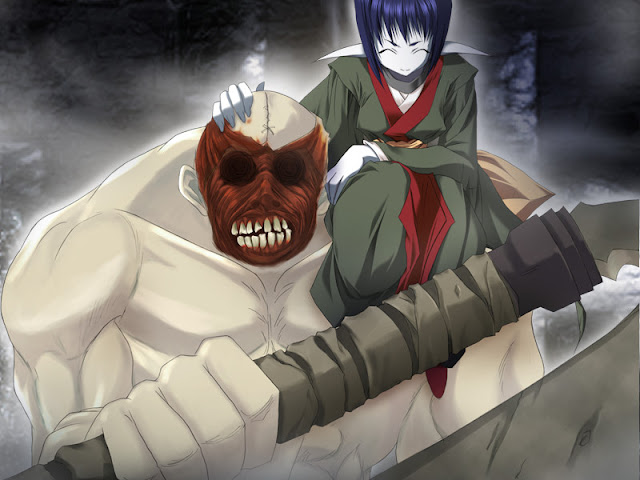 Story: I'll try to to spoil it as much as possible. As the story begins and Sougen arrives at the island, new samurai start to come with each new day and we get a clear assignment - to defend the island against the assault of the pirates that's bound to come. So at first I thought it would be a classic samurai story like Seven Samurai by Akira Kurosawa, and it would be pretty cool to see samurai get along with each other and the villagers and then participate in a great battle in the end.
WRONG.
At some point samurai started to have battles among themselves and monsters. There was even a little girl on a shoulder of a masked huge brute which is an evident origin of Ilya from future Fate/Stay Night. So I thought it would be such mortal combat to the end with the only survivor to remain - a cool story too!
WRONG AGAIN.
Then the fighting among themselves stopped and samurai started to die horribly in the reverse order of arrival. It started with new barely meaningful characters and went on to pretty much the main characters that started to die miserably on your very hands with long farewell scenes. So I thought it would be a story about the curse that reaps all the characters but the protagonist who overcomes the curse in the end somehow. I'd like to see that story as well!
ALL WRONG.
At that point I stopped my theory-crafting and just enjoyed this epic story. 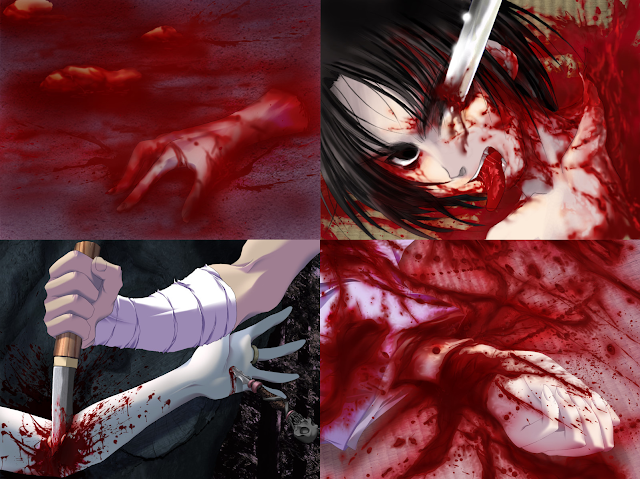 CG: I found and an abundance of CG to my liking. All kinds of horror and gore CG, lots of cute heroines ones. I enjoyed the visual part of the game immensely. Game has actually two softcore yaoi scenes.

Sound: Most of peaceful BGM include bell sounds and most of anxiety BGM include beats in them. At times I got somewhat weary of beat BGMs, but overall it's a nice fresh experience. 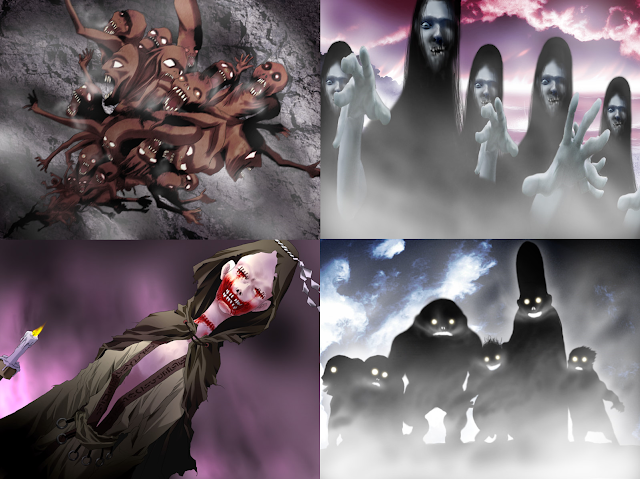 Technical issues: I used Pcsxr for emulation because it has its own self-written bios that both allows  faster emulation and deeper enhancement of the picture. It's the only emulation that had an option of HQx2 emulation which made text look smooth and finally improved character sprites to the extent that my eyes did not accumulate stress whenever pixelated character sprites showed up. For hooking I used HAT (Hook Any Text) with 00 hex substitution. 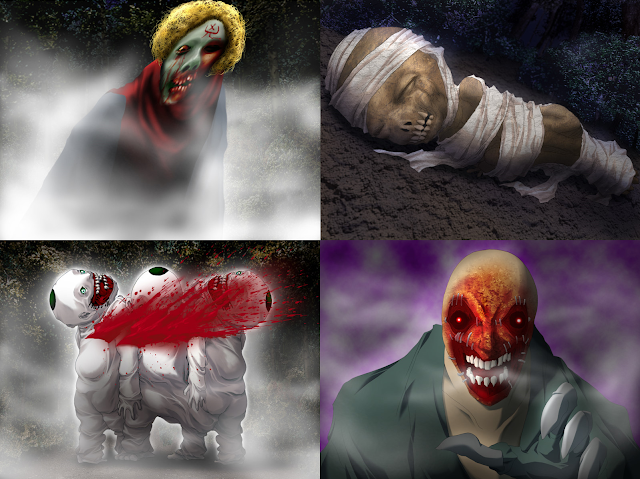 Thoughts:
1) First of all, I deliberately did not mention a special male character among the character cast. But that male character basically becomes the second protagonist and the best friend of Sougen double shadow. I'm absolutely fascinated by this brutal men friendship story.
2) In continuation of the first thought... that special male character actually gains his own love story with a heroine that has multiple steps in it. Where else did you see a story about a love interest of protagonist's best friend?!
3) We all know that SCA-JI is the master of character design. But look at Aya, Fuurei and Mikoto sprites - those are supercute costumes with pants seen at all times. I'm just in awe at each appearance of these heroines on the screen, really.
4) Game has a lot of infodumping and theory-crafting. The mythology part of it can be mostly safely skipped, but I really liked the historical part. There are a lot of references to shogunate, Tokugawa, Sanada and his curse, Sekigahara battle etc, and all the heroes have a place in this historical context with their own backgrounds and supported factions. A person with a really good understanding of the historical circumstances of the period would get immense pleasure.

Overall comments: I am not going to repeat twice, it's all in the review. But the level of my affection towards the game can be measured this way - it's the first game that I'm going to play a fandisk for, but I'll properly wait for reviewing Nijuubako till November 2001 coverage. 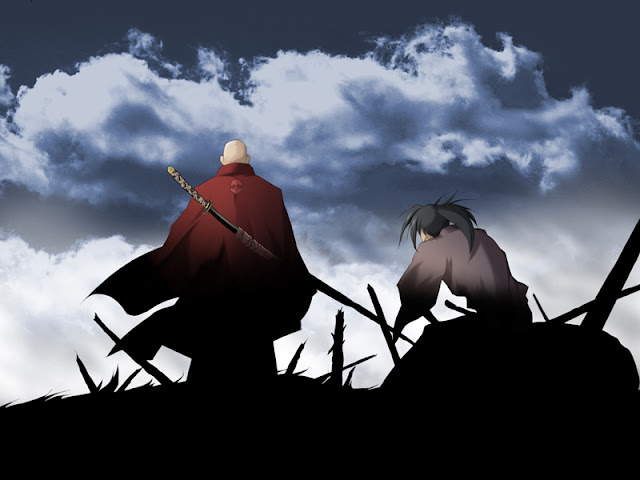 My old review on Reddit was quite positive. It's a really great game after all.

That you a lot for your review! It indeed was not judgmental, but rather focused on various aspects of the game. I was mostly saddened by quite low score on vndb - just 8.11 as of now.

I definitely hope Sca-ji will come back to making the remake. Maybe after Sakura no Toki. Also I like that you liked the character designs. They're really cute in that early 2000s kind of way. Especially Mikoto in my opinion.