Foreword: I rated Lipstick Adv.EX as 9/10 and I just can't believe that absolutely the same people - Fairytale and scenario writer Notori Shinji - could really make a terrible game after that. I hope to present an unbiased opinion from a person who knows the series well.
Title: Lipstick ADV.4
Developer: Fairytale
Date: 2001-02-23
VNDB link: https://vndb.org/v8780
Youtube walkthrough: https://www.youtube.com/watch?v=MgQ6XYeF1ro 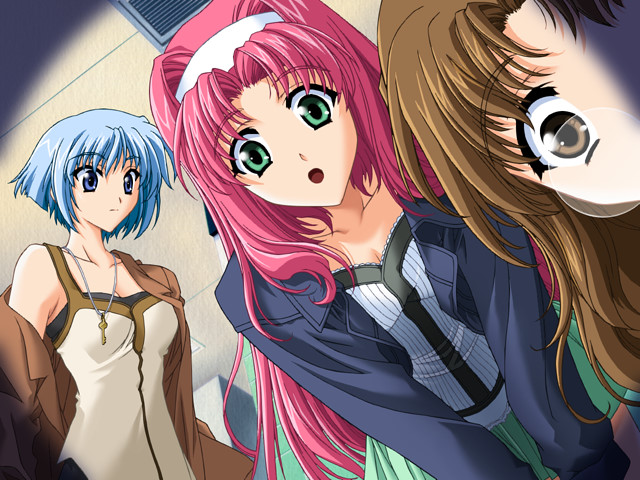 Synopsis: A small detective office in a non-descript back street shopping center, there is Goro Asami, a private detective, competent in his job, with business going well, but not well enough to live in wealth. There is Otomi Kiyosato, a student of Siratori High and the founder of the "Beauty Private Detective Club, one of the stranger clubs in that school, being an absolute pain in the ass by claiming to be Goro's assistant and inviting herself to his office enough to absolutely drive him up the wall.

During this period of relative bliss, an unexpected incident shatters the peace of Siratori High. Mari Kitagawa, the chief manager for the Creative Literature Club, is found dead with massive doses of tranquilizers and sleeping pills in her body. From the location of the body and the means of her death, the police initially declared this to be a suicide, but by the following day, they abruptly change their stance by issuing a cryptic statement that "Her death was not from suicide." Rumors spread throughout the high school like wildfire, and Otomi and her fellow detective club members began investigating the case. Goro also begins investigating this strange case, after being hired by the victim's father. With Otomi's cooperation, each step of the case gradually comes to light. Yet, before the case could be determined to be murder or suicide, Tomoko Andou is found raped and murdered at the thicket of the high school's rear compound. What is going on? Are the deaths related? Who wrote that mysterious notice, "Who's next?" on the board? 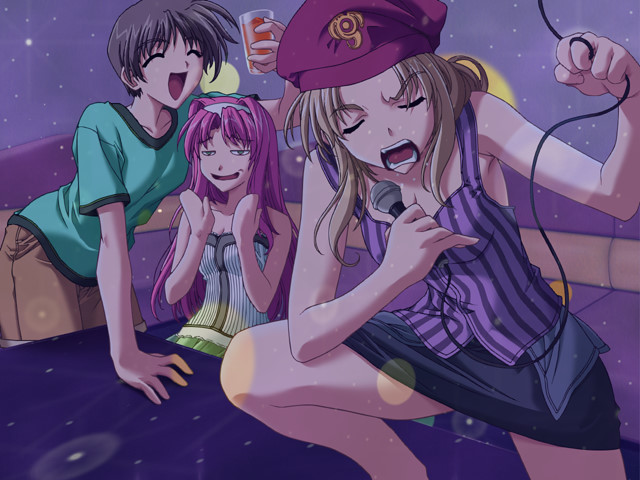 Rating comments: I don't consider this game a masterpiece, thus can't rate it higher than 6. My biggest complaints are about sudden H events and the story that I failed to see logical development in. About that in relative sections.

Protagonist: Goro has not changed much, but he is not voiced and actually is paid terrifically little time in the story. He can't get any results and is not good even for an advice. What he only manages to do is seduce nurse from the hospital that controls medicaments used with first victim death. So he's portrayed just as gigolo and at the same time all his special connection with Otomi goes to hell. 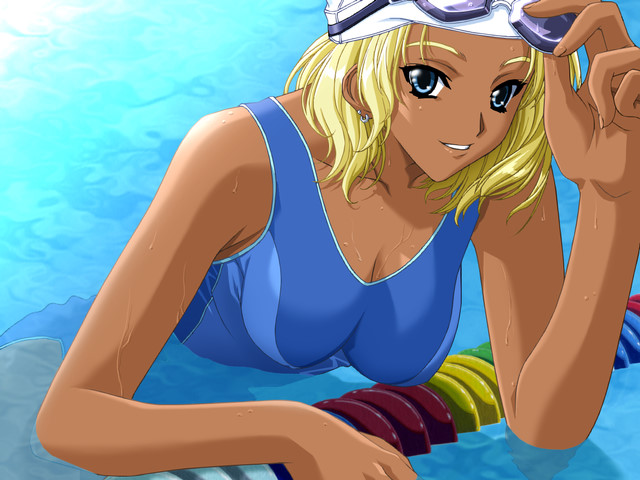 Characters: Game is a single road story, there there aren't character routes. Otomi is one of two protagonists. The other two female detective club members Rieko and Aki are still there with their personalities totally the same as in Lipstick Adv.EX. There are also some 6-10 girls that exist for entourage/fanservice/as victims.

Story: Scenario is actually as sophisticated as in Lipstick Adv.EX. But in that game both protagonists were able to find the clue that led them both at the same time to the criminal. In Lipstick ADV.4 there is much more chaos and depression and much less logic. If I remember Lipstick Adv.EX mostly by detective club smalltalk and fabulous epic fails of Rie, Lipstick ADV.4 is remembered by crying faces and atmosphere of total hopelessness. The killings continue to happen, the billboard notices concerning criminal next actions continue to be drawn each day, the voyeur cameras are found, but no steps are made to identify the culprit. It is a SPOILER ahead, but without it can't describe the flaw of the game.

The whole detective intrigue is solved by just throwing in three criminals at once - even if you could guess one or two, you would not be able to tell there are three of them, right? And the way these criminals are identified are just laughable. One of the criminals is identified and caught by the 3rd party, so neither Otomi nor Goro have zero progress in this incident. The second criminal just admits his guilt in a long talk himself - is not it stupid? The third criminal is just a wild guess that we have to make among a huge list of names in the end. And since there aren't any clues in the game, it could be absolutely anyone. All three cases are absolutely pathetic and have nothing to do with detective mystery solving. 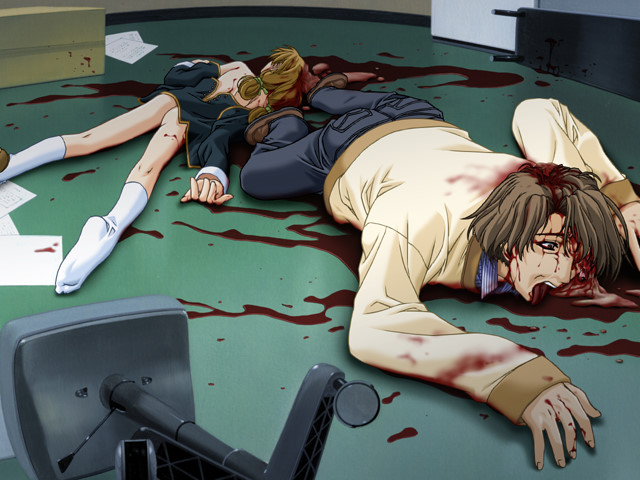 CG: There are quite many CG, but they all feel bleak. Most of them are just one girl / several girls standing still. Even CG with some activity are poorly done and I can't feel affection for them. Also I'm absolutely surprised by the fact that 8/9 H scenes are shown during the main course of the game and just one as a part of a bad ending. All the other bad endings just present a gore picture of some death. I'd really want to see H scenes only as part of BAD endings.

Sound: All girls are voiced and BGM... not remaining in the memory. 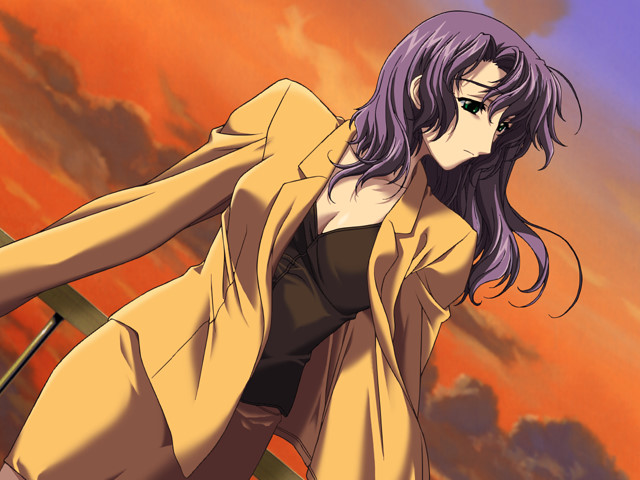 Thoughts:
1) Story was the first element that disappointed me, but the second element is Otomi. The whole series was holding on the fact that a sexy girl can be a full-fledged partner in detective office and not an object of sexual manipulation. And Lipstick Adv.EX was surprisingly true to the series. Otomi equivalent Koume there manages to remain a symbol of purity, and her kidnapping in the end is seen as an attempt to defile that purity of the series. Koume remains virgin loyal to Megumi (equivalent of Gorou). But what happens in Lipstick ADV.4 is freaking weird. Otomi interrupts two girls having fun and as a result gets involved into a mild lesbo 3P. After that she thinks it over at home and understands that she was practically raped there. But on the next day she is invited by the same two girls to the karaoke and under their pressure just can not say "no" - and she freaking gets raped for the second time... that's just so humiliating and stupid, really. Humiliating because it goes in contradiction with the whole series experience and stupid because only an idiot would step on the same rake two times!
2) Comparison of Lipstick Adv.EX and Lipstick ADV.4. I've no idea why Lipstick Adv.EX has basically the very same characters, but with different names, probably because of some rights issues or some characters getting an irreversible development. But with both games having the same scenario writer it's natural that games are very much alike. More that that - I see an absolute mirroring in many cases. Both games start with the girl death and have highest depression peak after second girl death. Both games have spontaneous scenes of girls being insulted by an unknown person. And I even see the mirroring in the fact that the core motive of both first murders in both games is justice seeking revenge, but the next murders are only seemingly of the same kind, but actually absolutely different. So games are very much alike, but in absolutely every element Lipstick Adv.EX prevails. 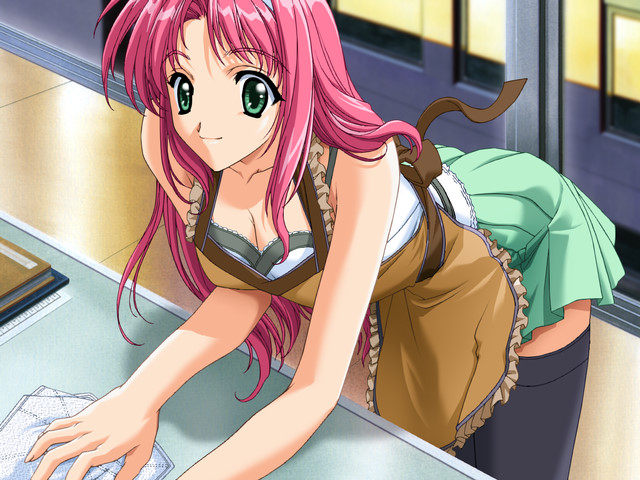 Overall comments: Lipstick ADV.4 is not a bad game at all, but it is basically a degraded version of Lipstick Adv.EX and thus is shown in a bad light. At the same time Lipstick ADV.4 breaks several traditions of the series:
1) It has nothing to do with the bombings
2) It defiles the figure of main heroine
3) It humiliates talents of main hero making story develop by itself
With that I suggest to extradite Lipstick ADV.4 from being a part of the series. Amen. 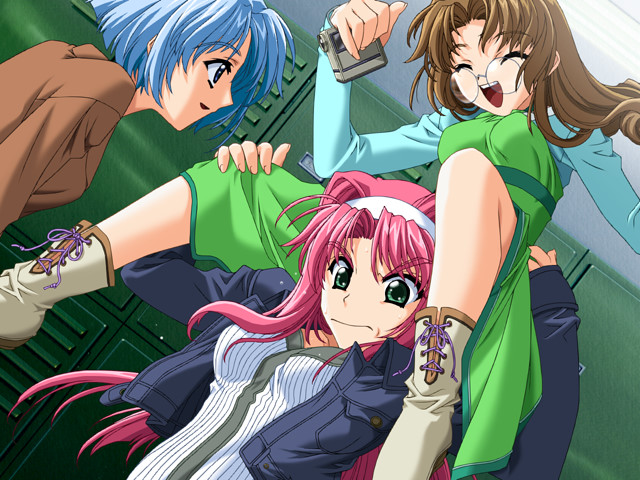