Foreword: With deletion of boukennonikki blog there's only one review of this game left, so I hope to fill the vacuum, even though it won't be even remotely as good, but should be same critical.
Title: Vampiridzhija Vjedogonia
Developer: Nitroplus
Date: 2001-01-26
VNDB link: https://vndb.org/v433
Youtube walkthrough: https://www.youtube.com/playlist?list=PLs4Gp5VU4Fv8FJtK-V943T3Tubn32ekIB
Synopsis: One night the protagonist sees a beautiful woman in distress; he tries to help her but she bites him. She turns out to be a vampire! And now he will turn into a vampire too, unless he finds her again and destroy her first. So he joins with a group of vampire-hunters... 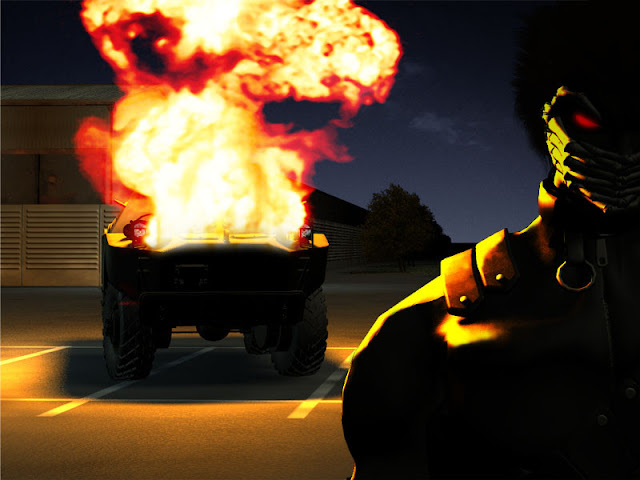 Structure: 13 days
Length: 4-5 hours x 4 routes
Game type: Vampire wars SF story.
Difficulty: Easy since there are only 4-5 choices in the game. But choices are absolutely not connected with either heroine, so it may be very painful to find the leftover one-tow routes without walkthrough.
Character Design rating: 6/10
Protagonist rating: 7/10
Story rating: 8/10
Game quality: 6/10
Overall rating: 7/10

Rating comments: I feel it's a giri-giri masterpiece, thus only 7. I especially liked that four heroines routes are very different. 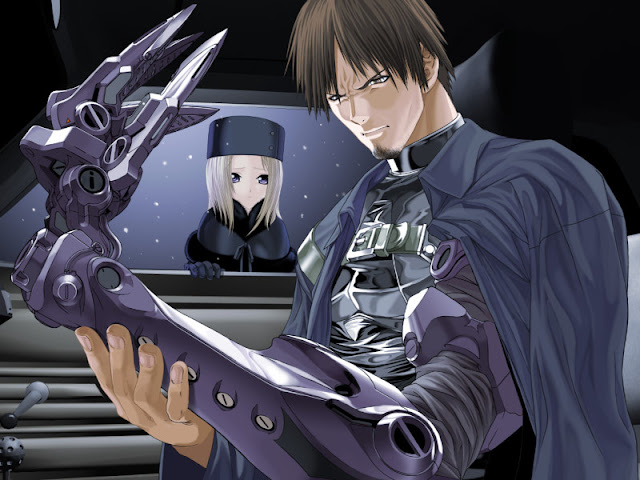 Protagonist: Souta is always cool. He's mature, strong, fast to act and reliable. All his CG are superb.

Characters: There are four heroines: childhood friend Kaori, serious meganekko Misako, vampire hunter gothic loli Mora and ancient vampire Leanhaun. The major part of their routes coincides, but in-between battles there are individual developments and often even new enemies or old characters transformation. It can be also noted that Kaori+Mora and Misako+Leanhaun routes are paired up and have relatively few differences between themselves. 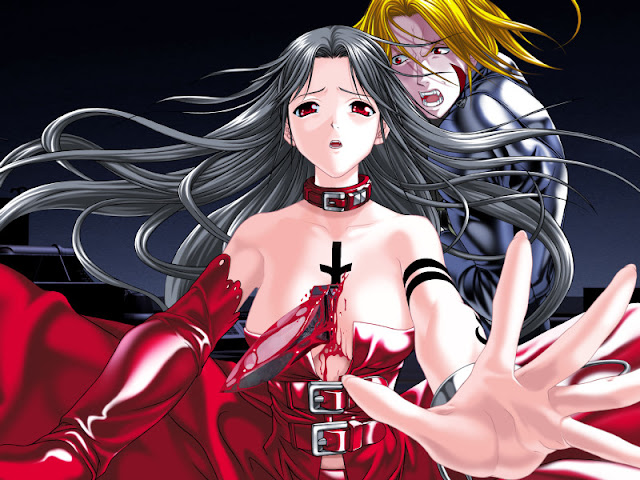 Story: I rated story high because of changes in each route. The main story is not as sophisticated as I'd hope it to be. Souta has bites on his neck and vague memories of some girl just before that. He accidentally observes a monster rampaging and getting slain by a pair of vampire hunters. They finally shed some light on the neck bites, and at the next monster encounter Souta is able to release his power. They decide to organize a set of diversions against an organization that executes on the vampire who bit Souta which follows by a front assault on the base. In very crude words, that's it. There are several cool guys, both enemies and allies, and each heroine story adds her perspective, but the core remains intact. Again, quite simplistic story, but well developed in details one.

Technical issues: In order to use 1.03 patch that allows to skip battles it's needed to reach at least one good ending. If you don't want to fight that badly, you'll need 100% savegame, just like I did - then in option there will be a new line to skip battles. Also my preferred capture site foolmaker had a very bad mistake in first action of Misako route, so I wasted 4 more hours of my life that I needed to. 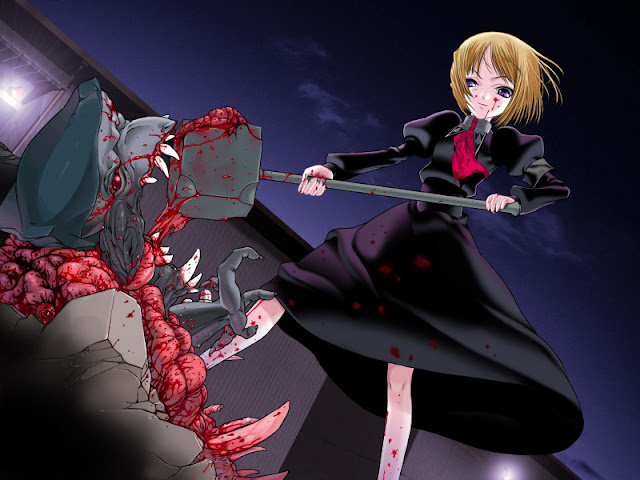 CG: Character design is bad, and eyes melt at times at the sight of those character sprites, but at CG there are - usually - much better perspectives.

Sound: NO voicing! That's very upsetting. What I liked in sound support was that there were some nice full compositions at the place of musical performances. Oh, and song on the base assault timing is just perfect, and very memorable. 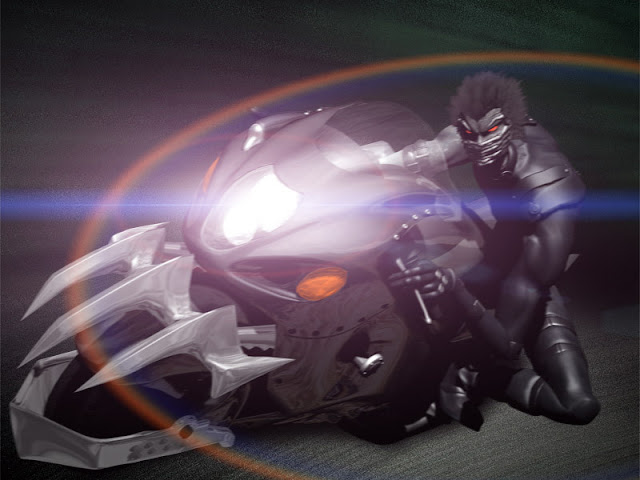 Thoughts:  Vampirdzhija is a spiritual successor to Phantom of Inferno. It's seen very well in love to weapons and animated sequences. HOWEVER those 3D backgrounds really devalue everything. As if character designs aren't good enough demotivation. But in action scenes 3D is quite a plus - thanks to that we get a very dynamic picture thanks to the same bike shot from lots of different angles etc. So there is some merit in it.

Overall comments: As I see it, there was a revolution with issue of Tsukihime by Type-Moon. It has become evident that it's not necessary to invite Carnelian and polish romance elements for a game to sell well. And it's not needed to make another Phantom of Inferno huge masterpiece each time. Just get a good scenario writer, and even Tsukihime photo backgrounds and simplistic character designs are enough. Vampirdzhija Vjedogonia was exactly the same attempt to reopen visual novels from a totally different from mainstream side, and in my opinion it failed at that due to story limitations primarily. But look at it from another side - game with bad character designs + 3D background and some CG + annoying fighting minigame + NO voicing. And such a game is still a great success, and even considered a masterpiece by me. Truth be told, I just don't like Urobuchi Gen writing as it's always so much fuss about epic setting and action with a very mediocre story behind it. Saya no Uta is a special case since it basically broke Urobuchi life being such an intense narration. So what I want to keep in memory the most in this game is the awesome CG, so here they are. 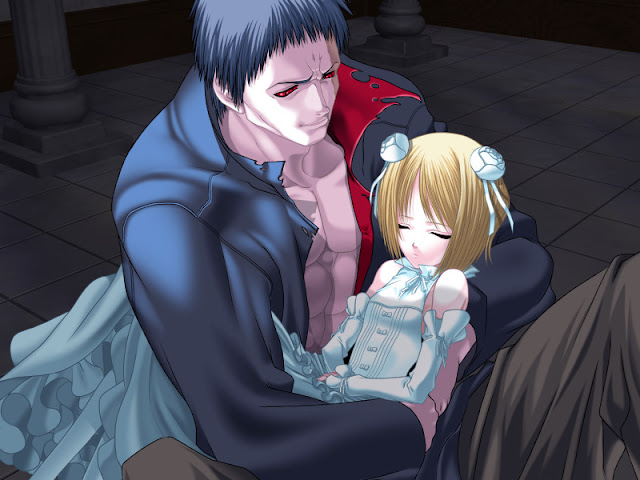