Foreword: Why would KeroQ make a moege? This though bothered me for a while. But what if KeroQ tricked everyone and made something entirely different under facade of moege?
Title: Moekan
Developer: KeroQ
Date: 2003-01-31
VNDB link: https://vndb.org/v3139
Youtube walkthrough: https://www.youtube.com/watch?v=011WabnKsQ8&list=PLs4Gp5VU4Fv_47rfDklNMh3spmTY4nrpl 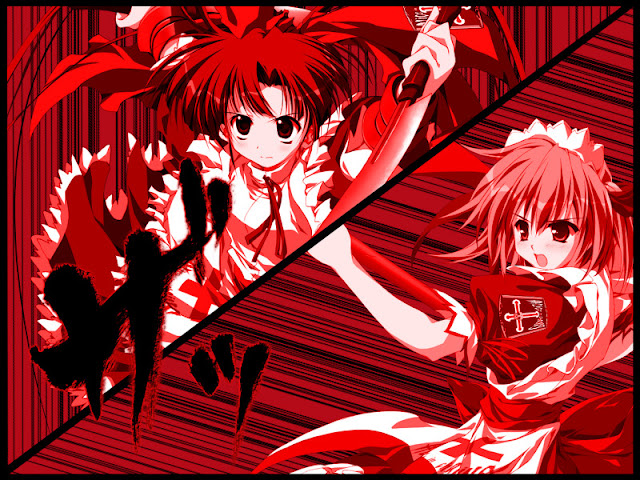 Synopsis: An anarchistic country that is said to dominate the world exists on a vast island known as Moekko Island. This is where the final works of AC Company's android combat maids (resembling beautiful young girls) are done, also where these maids get there communication training. A new maid is to come to the island to be trained, Rinia, she is a young looking girl, who has lost her all of her memories, she tries very hard to impress the owner at Moekko island, but just ends up making a lot of trouble around the mansion. Takahiro, the owner of Moekko island, a depressive young man who has also lost his memories is seen as a very unhappy person who thinks Rinia will only be trouble around the mansion. As time passes, Takahiro slowly grows attached to Rinia's attempted ways of helping and so starts a beautiful relationship among the quiet island. 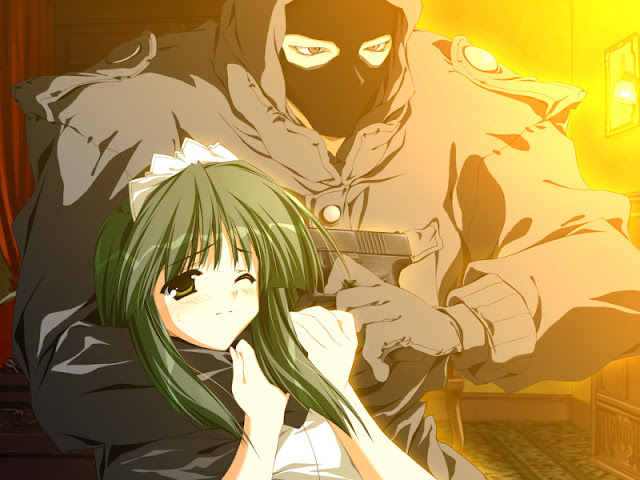 Rating comments: I found only one (1) English review of the game, and it claims that it's hard to see how someone could find real fault in this title. I took the challenge... and... failed to find anything irritating. The only vague reasons that I cling to decrease evaluation is the story that I do not consider overall interesting or curious. It does not mean it's bad - it's full of tricks, and resolution that takes 1/3 of the game is great. Still 2/3 of the game nothing but gags happen, and I can't approve it. Not after Tsui no Sora and Nijuuei.

Protagonist: Takahiro is pretty much the largest mystery of the game. We more or less know who he was and who he is now. But he has huge potential and background that can strike at any moment in any way. It's heroines that search a key to his inner self, not the other way. Basically, his story is the thing that keeps things moving. 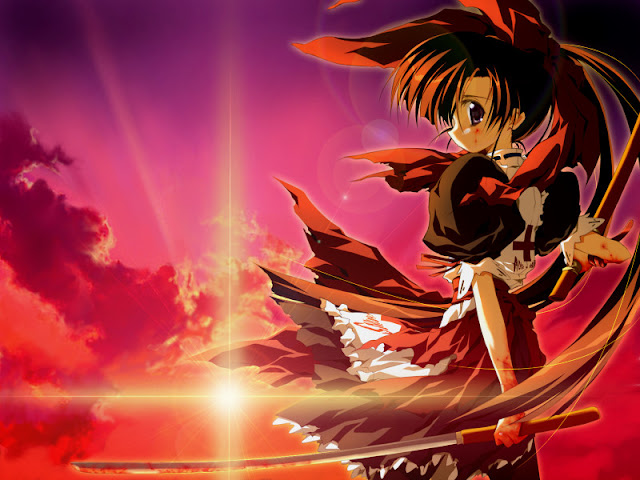 Characters: I am true to my review system, so I played only two routes. First one is main heroine Rinia, naturally. As for second heroine, I chose Kirishima just because I got pretty tired of maids after Rinia route - Kirishima is assistant with boyish looks and pretty wild temper.
Rinia is more just main character - she's reincarnation of Sae from Nijuuei. Even I noticed that Sae is absolutely the best heroine of Nijuuei giving the game that special positive tilt. Rinia is also a maid and - moreover - she is voiced by the very same seiyu in the very same manner. That instantly rises moe level of a new game to the skies. Despite all the huge story layer built over Moekan, I will still treat it as a huge fan-disk of Nijuuei to finally give Sae her own huge route. And it really worked out great as we got 10 hours devoted almost exclusively to Rinia. We get to see her in happiness, in illness and during crisis, so it's a normal main heroine path. Oh, and the most important thing in Rinia route is that it does not have H events at all (one half-naked after bath scene does not count). There are three special training evil endings just for the sake of H events, but that does not spoil impression of good ending at all.
But then I played Kirishima route... It had some cute scenes and one H event by the end, but what absolutely shocked me was the ending. The ending is not really a good one - and that's the only ending we get for her. Giving one heroine a good ending and another one not so good one is absolutely genius. I did not have the strength to play the other two maids Fuyuha and Kazusa, as well as zashiki-warashiki type heroine Suzuki, but if their endings at least remotely same shocking, that'd be absolutely amazing. 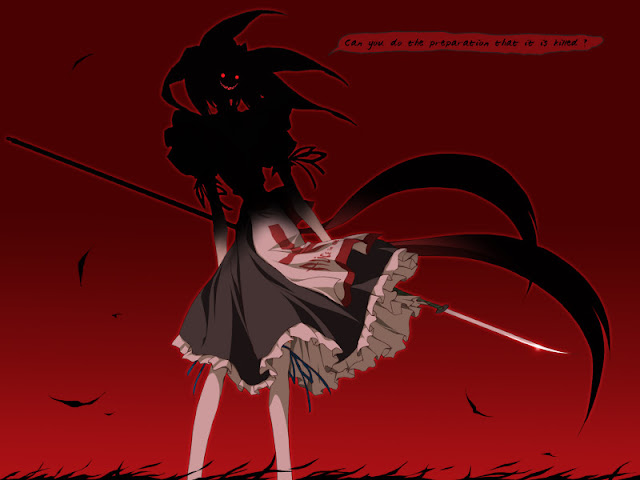 Story: There's not much to say about the story. Takahiro is given difficult task and limited time. There are a lot of sharks waiting for him to make a mistake. Rinia route has two action scenes regarding assaults of enemy forces on Takahiro while Kirishima route only has one. And that's pretty much the whole story. But what makes the story shine is the amount of details in the well developed worldview. Just as in Nijuuei there's quite a lot of infodumping first about the present state of the world with huge organizations based on islands, then we are gradually accepted to see the past - the fake one and just a bit of the real one. Nothing is easy here - we don't have some enemies. We rather have some five groups of rivals, and we never know their intentions and which one is going to strike. Attention to details and world-building is what makes games masterpieces.

Humor: There's so many gags in the game. They are mostly presented by chibi CG. I just can not forget that hysterical laugh "ehehe" upon breaking that vacuum cleaner lever. 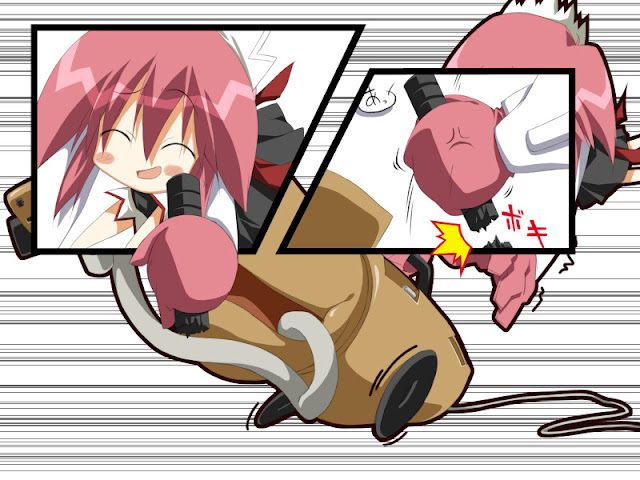 Thoughts:
1) Moekan tricks us presenting action-packed charage instead of a promised maid moege.
2) Game's still more of a charage than a plotge - that's why I'm showing action CG to remember game for its action scenes.

Overall comments: Game of very high quality and care for detail. I was going to give it a 9/10 score, but over time impression got duller and I was able to rate it more rationally. Even with such top class heroines I still can't fully appreciate a charage. There's a huge difference with Nijuuei. In Nijuuei characters empasized the plot, but here plot emphasizes characters. And for that reason I do not really want to play Moekan fan-disks Moekasu and Moeten. There's enough time devoted to each character, so there's no wish to explore them further in any kind of side-stories. It's one of the best charage in visual novel history, but for me it's not as strong as other three KeroQ works. 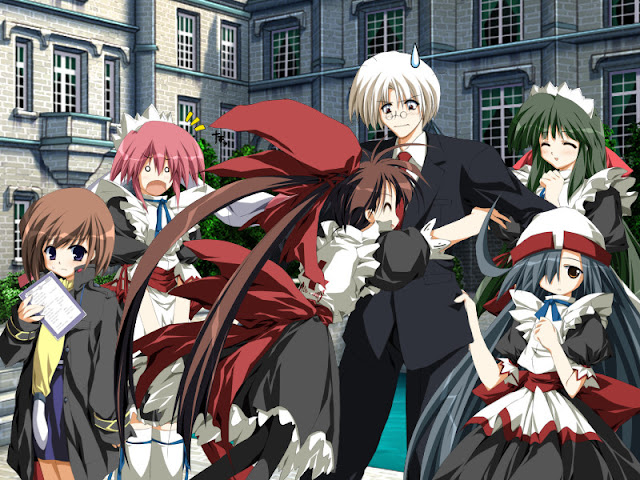