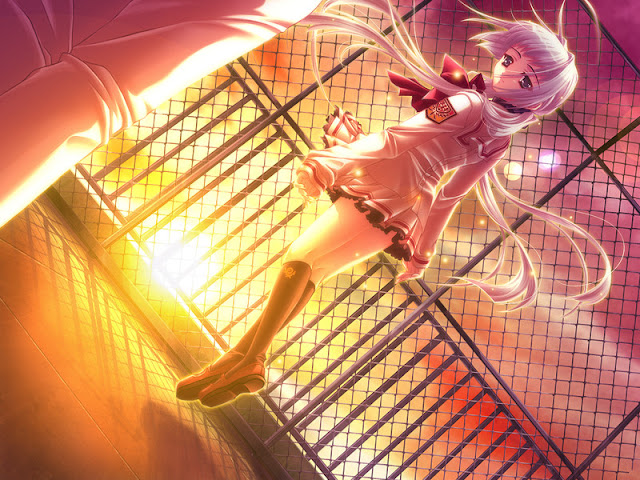 Synopsis: Moriguchi Kazuto is just the ordinary high school student who attends a private school. He spends his days relaxing, regularly attending school and also enjoying time and talking about urban legends and rumors at the school's occult group. Among the club members are the shy underclassman Sayuki, the serious classmate Shizuka, the beautiful temporary teacher Shinamo, and the club president Shintarou.
One day, Kazuto wakes up after seeing a strange dream - and his life changes completely, his world flips around when he meets the strange girl called Miaka, who just keeps giggling without a worry in the world. He started hearing and seeing things others couldn't, and what these phenomenona pointed to was the urban legend of his school.
"The girl of the sunset."
The old story and the curse of the girl who jumped off of the rooftop and entered the "other side". And so Kazuto gets sent to an unknown, another world.
"You're coming with me, you're coming with me, you're coming with me--" the "girl of the sunset" chants. His every day life changes completely, and turns into a horrible and miserable nightmare. The sound of the ringing bell. What will become of Kazuto as he and the people around him slowly become eroded by fear?
Can Kazuto find a way to break free from the curse's chains? Can he find the true meaning behind "the girl of the sunset?" And what exactly is the "final day?" 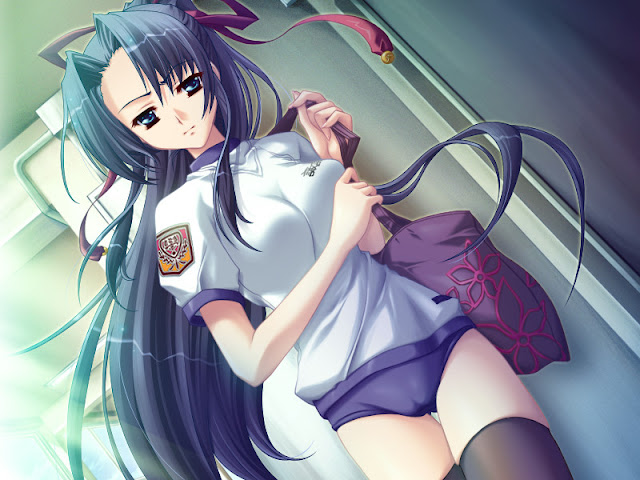 Rating comments: It was an exhausting journey for me. I was expecting something very different. What I got hit the worst spots for me. 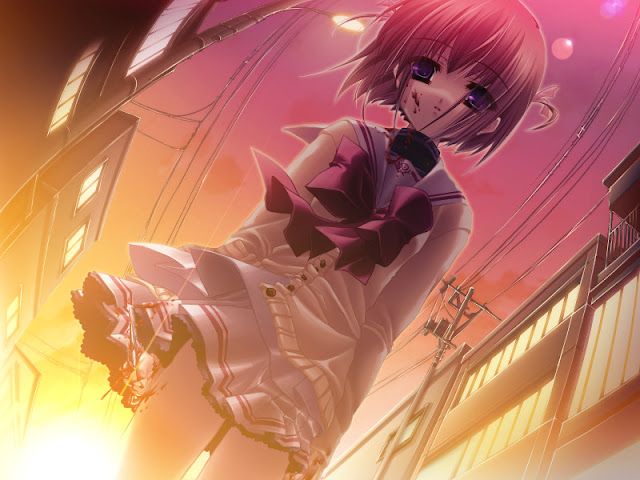 Protagonist: No presence felt. All meaningful actions chosen by reader.

Characters: That's the most difficult question for me. I chose serious childhood friend / shrine maiden Shizuka and main heroine mysterious girl Miaka. The other two are much worse - totally shy Sayuki and clumsy teacher Shinano. Shizuka was a least partly enjoyable with her constant half-closed eyes look as if awaiting some pervert action. She kinda fulfills the role of childhood friend, so she dominates the stage. Another good thing about her is her family, notably father who presents the only attempt in the game to cheer things up a bit. Miaka just shows up occasionally and says strange things. No one knows which class she is from, and protagonist each time forgets to ask her about it. She remains black box right through the end, and that's not what main heroine should be like. 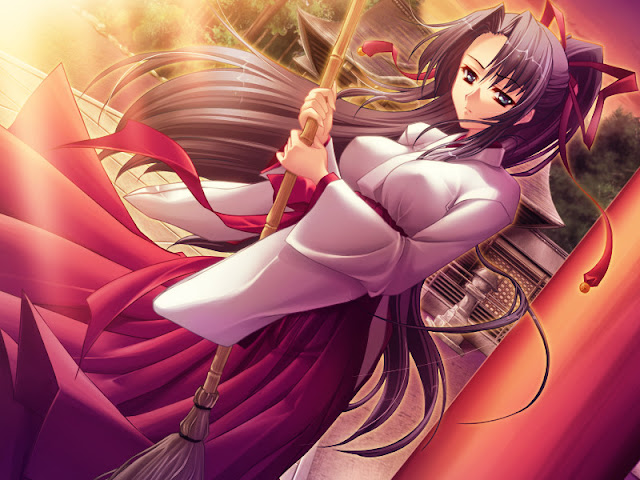 Story: The good thing about the story is that it's compact and takes place only at school. Pretty much everything else is bad. Members of the occult study club are in the center of attention. No one does anything in this club - reading books at best. But after protagonist starts to see strange dreams about sunset girl, it becomes a hot topic for discussion. But again - everyone in this game is incompetent. Miaka keeps talking about her lost diary, and club's greatest accomplishment is finding this diary. And of course this diary brings us to the end of Miaka route. Other girls stories are just about girls themselves. Now for the darker side of the game. Protagonist sees delusions about each girl in their routes. Apart of that each girl has a dark experience that becomes the center of each route. Rape, chains... all that stuff. And it produces only negative emotions. Game is closer to utsuge than to nakige, really. 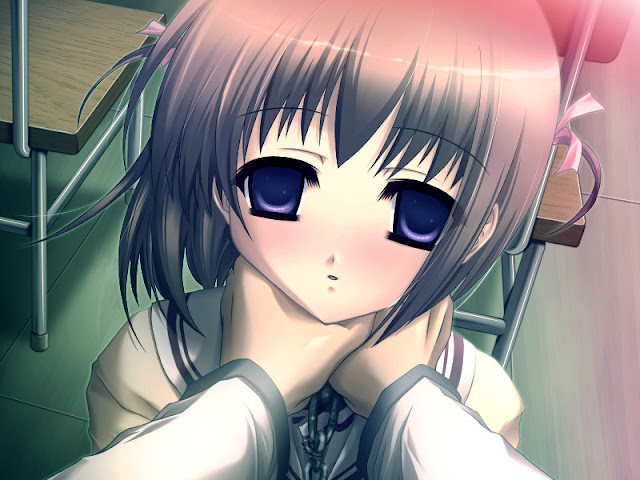 Thoughts:
1) Game is pretty dark on its own, but just as two previous BaseSon works, there is NO humor in here, like at all. The mood is dense with all the seriousness, but then it turns into negative with approaching the girls stories.
2) At least a third of the game happens during sunset. All the crimson palette and all the delusions in form of dreams really reminded me Sayonara o Oshiete. The whole concept really looks similar, but with some normal school SOL part this time and without a touch of madness. But I really disliked Sayoshi, so it might affect my evaluation of Yuuhi no Mukougawa with a similar concept. Also some parallels can be done with Ashita Deatta Shoujo, but without the genius concept. 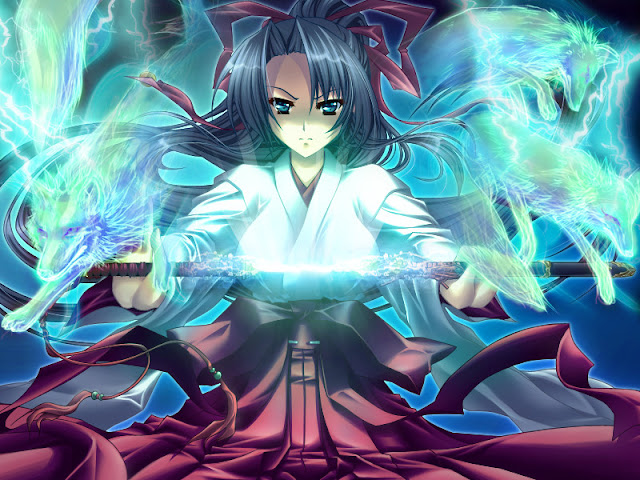 Overall comments: What we get in the result is a depressing game with no really likable heroines. Games is of really high quality, but it turns into a short-minded disaster. I can't stand occult theme, so it was a torture to read about it. What I see from first three BaseSon games is that it can make visual novels of high quality with great visuals, but it absolutely sucks at original stories. It's a great boon for them to have found the Koihime niche. If they continued as they started, they would have been bankrupt by now. 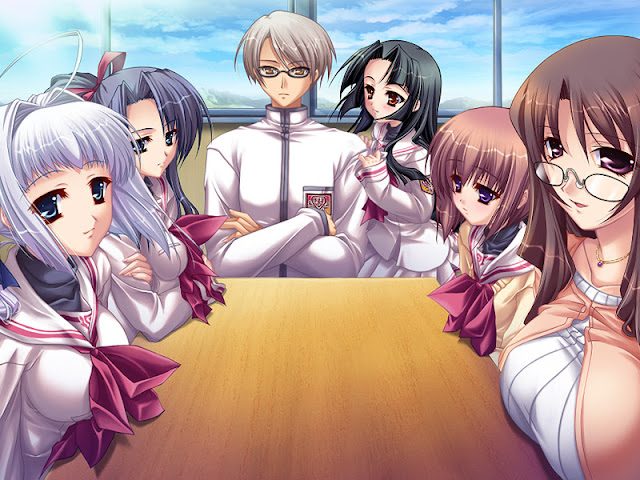