Foreword: I see girls crying as disgusting, so I'm ill-suited for reviewing nakige - checking out different reviews might be a better idea (1 2 3 4 5 6). However, Dear My Friend by the same scenario writer and artist left a lasting impression on me, so I don't mind checking their new work that even contains fantasy elements. There are several heroines who don't cry all the time, anyway. 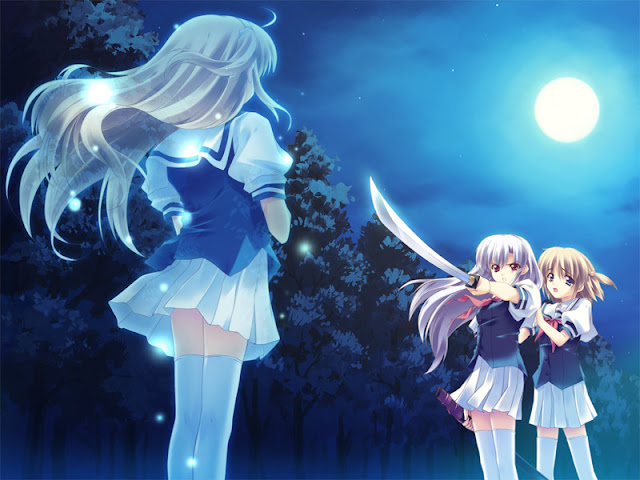 Synopsis: To Hatoba Kazuki, Nonosaki Akiho had been an irreplaceable being. For as far as when she and her sister, after the loss of their parents, were taken in long ago, she had taken the role of his big sister, his mother, his sweetheart. To him, the loss of her figure meant the world had crumbled down, for him who had managed to gather up courage and confess, days before summer break.
A couple of months later, as the pain of parting still remained vivid, the ghost of Akiho appears before his eyes, save little for warning. "I still had memories left here", she said softly, a soft smile attached to her face. 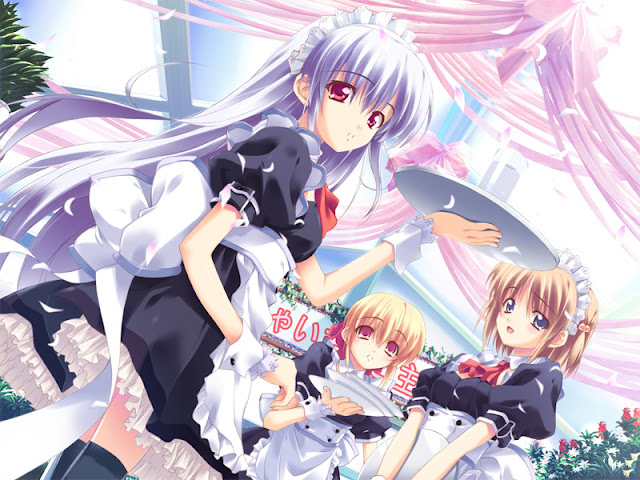 Whys is it evaluated lower than Dear My Friend? Exactly because of nakige nature of the game. Every time Tsubasa shows up, I just have to skip some time because Tsubasa either cries already or will cry in couple minutes. Mukatsku... Introduction with Chihaya also occurs under girl's heavy cry, initial impression is spoiled already and I'm kinda skipping these two routes for evaluation completely if I'm going to get any positive emotions out of this game at all.

Compared to Dear My Friend quality and great SOL scenes remain same exciting. But score for heroines and protagonist is lower. Story was never much of a thing, but this time development is very slow, and common route occupies five of six chapters. On one hand it allows to introduce a lot of funny SOL and zapping scenes to show girls' point of view, but on the other hand leaves only a single chapter to actually fall in love with a heroine and date her. Some words about heroines. 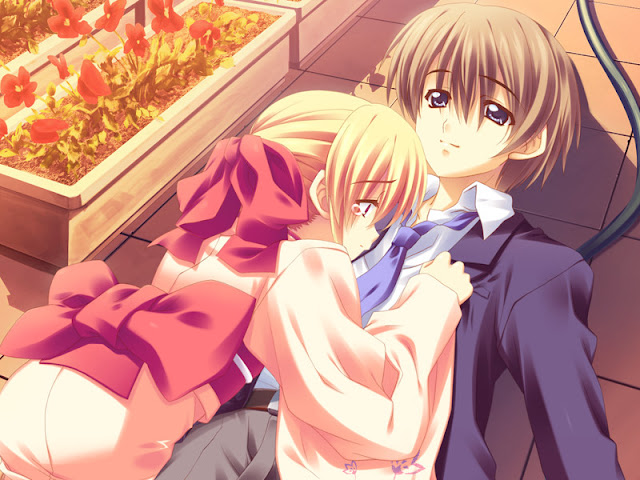 The problem with Akiho is that she is quite light-minded and that she is everywhere (not just because she is a ghost). She is girlfriend from the start, and after her death no other romantic interest is found by Kazuki. So when she shows up again as a ghost, Kazuki suggests dating again, and it continues the whole common route. Her route is definitely main one due to her special status and miracle happening to her. But it poses problems for other heroines. It does not really look convincing how Kazuki can shift to another heroine after loving Akiho all his conscious life and 5 of the 6 chapters of the game. Of course, other heroines are humans, but it does not make it much easier. So Akiho route should probably be played last as True one.

As for exorcist miko tsundere Tamami, she is really nice, but sort of simplistic. I favor more complex and mature archetypes. 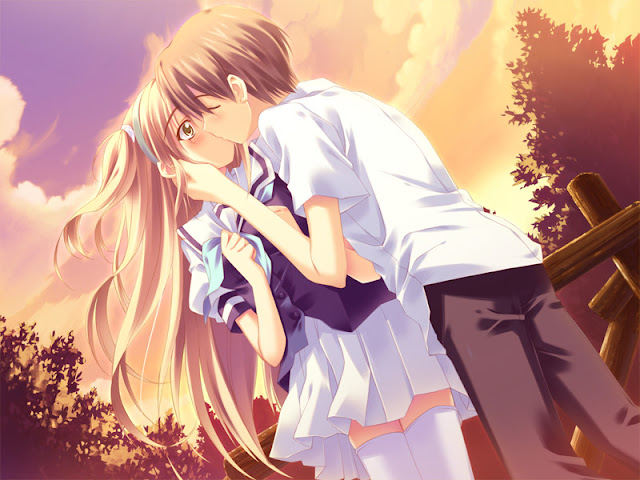 It was pretty strange for me to discover that many Japanese reviews find a lot of elements to criticize. I find treating death lightly as a good thing here. It provides a generally funny atmosphere and deserves praise for not trying to squeeze a tear everywhere possible. Nakige is built upon heroines' complexes and relations mostly, so different readers may choose which heroines to prioritize and thus focus on comedy or nakige.

Overall, a great game. My seemingly low score only follows from nakige nature of the game and direct comparison with Dear My Friend. Every fan of the genre should definitely try it, but even haters like me can find elements to appreciate. 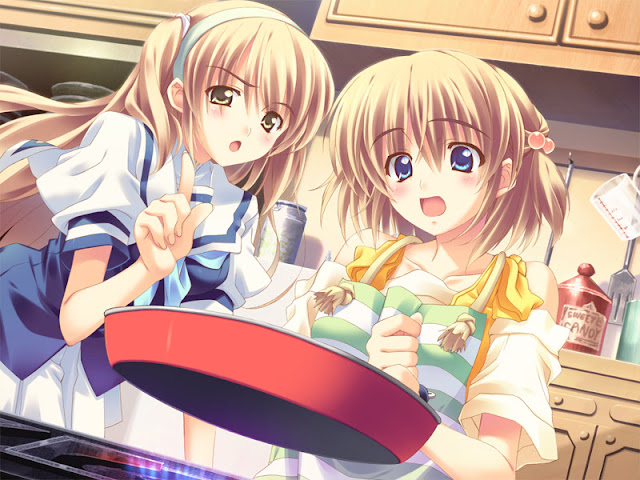 So, people cry a lot? Did someone died or something?

Only Akiho dies in the first 10 minutes of the game. Chihaya is initially not human, but kind of shinigami who wants to reap the soul of ghost Akiho. And she cries in repentance for her initial intent. And Tsubasa cries all the time, mostly because she wants to protect her ghost sister Akiho from Chihaya and especially from exorcist Tamami. Then she cries just because she feels inferior compared to her sister Akiho. Just juvenile complexes.

Wow, that's awkward. I wonder if Akiho gets revived from her dead state? I question the story and how it was written, what, with how the characters are behaving like idiots.

Akiho dissolves in the year in the farewell scene. They in the epilogue it's 10 years later. Older protagonist lives happily with a 10 years-old revived Akiho with her old personality.

I see. That sounds interesting, with a 10-years-old reincarnated Akiho with her old personality living with the protagonist. Did he just recognize her out of the blue or something when she reincarnated?

It's not really described. Just years pass, and we're shown protagonist and very young Akiho hanging on his neck. She mentions her revival and age more for reader, then invites him to the beach and even allows to slap her on the ass if she behaves bad. It clearly looks like they live together for a long time by then. Pretty cute ending.

I see, and this happens in her route? I wonder about the other routes? Does she dissolve in those routes?

Yes, in other routes Akiho just says her goodbyes and dissolves.

I see. I guess Akiho gives her blessings to the protagonist's second love before she dissolves?

There are three other heroines, so Akiho only gives farewell to protagonist before disappearing since she would need to bless a different girl in each route.

I see, that somehow makes sense. Akiho only gives her farewells to the protagonist before disappearing since she only has that much time left to do so. Not only that, she'll waste even more time if she were to bless a different girl in each route, so she doesn't do so. Three different heroines, huh?

Sisters relations are still in the center of focus. But there is also exorcist shrine maiden Tamami and god of misfortune Chihaya as main heroines.

I see. God of misfortune Chihaya, huh? A local goddess? Interesting to see.

God of misfortune Chihaya was sealed in a tree for 500 years, so she is and old-fashioned timid girl who constantly apologizes. She is encountered in her goddess form only the first time we meet her at school. Personality-wise she is very ordinary, and thus not really interesting. She also cries from time to time, and I don't appreciate that.