Foreword: Took this game blindly for review just because I consider Coμ a full 10/10 masterpiece and want to see what games preceded it. 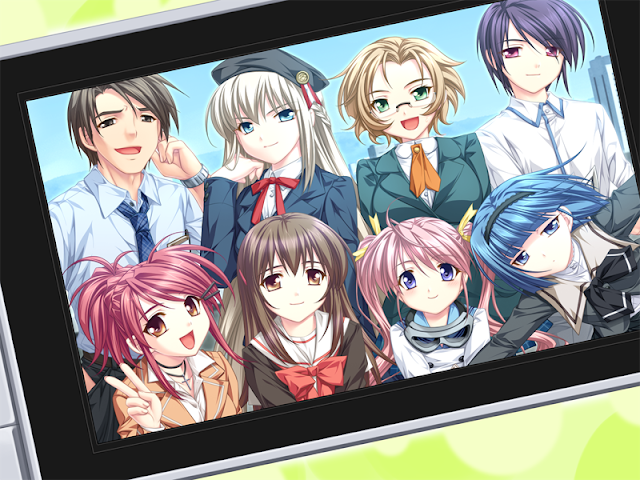 Synopsis:
Wakutsu Tomo was brought up by his mother as a girl due to a small mark he has on his body. After his mother's death, he discovers via her will that she emphasizes Tomo continue to live as a female, and following this, Tomo starts to go through more troubles in his life. Tomo soon discovers that he is linked with five girls who are around his age as a second year high school student. These girls happen to have the same mark he has, and also have been going through hardships in their lives. Tomo and these five girls decide to form a pact to stay together and support each other to solve each of their problems and to bring peace to their lives.
Youtube: https://www.youtube.com/playlist?list=PLs4Gp5VU4Fv_TqnQaJbD5FGO4x3Ng7Tiq 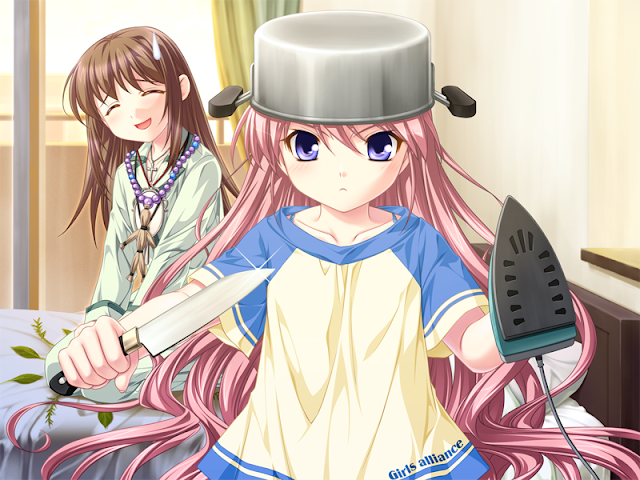 As you see from the scores, I'm angry about this game. I'm too irritated by inconsistent story, trap protagonist and his bully behavior in H scenes. Impression may change later as it did with Clephas two reivews, but it's where I stand by now. Read other reviews (1 2 3 4 5 6 7 8 9) if you want a more positive approach. 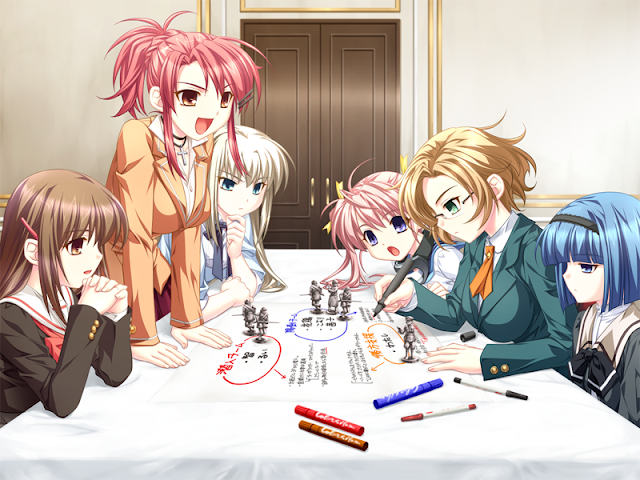 With that handled, need to remind what this game is about. It's a metaphor on our reality, a cruel world that does not tolerate delinquents. Moreover, these delinquents' situation is aggravated by constant fear of breaking conditions of their curse, different in each case. So no one can trust anyone. Still, people are social beings, and they seek for soul mates. Normal people are too different, so cursed characters look for alike persons, bounded by curse. Such people can assess risks adequately and maybe even provide some support. As a result, we get a bunch of bitter sarcastic delinquents who don't mind teasing each other. The good thing is that all these people become mature very early. Even though communication attempts are rough, it's always good to see adult people talk. For the same reason there's no romance in this game. Everyone hides in his shell, there can't be even thought about getting defenseless in front of another person. The same goes about trust. It's a given that no one can be trusted. And the whole point of every route in this game is to pierce through this trust barrier. This process can differ substantially and be even rough like in Atori case, but it's what this game is about. And that's why each route is not about a certain heroine. It's about some trip or lasting event that bonds people together. Trust is not something that can appear overnight, that's why each route is really long, often with a lot of repeating common life events. 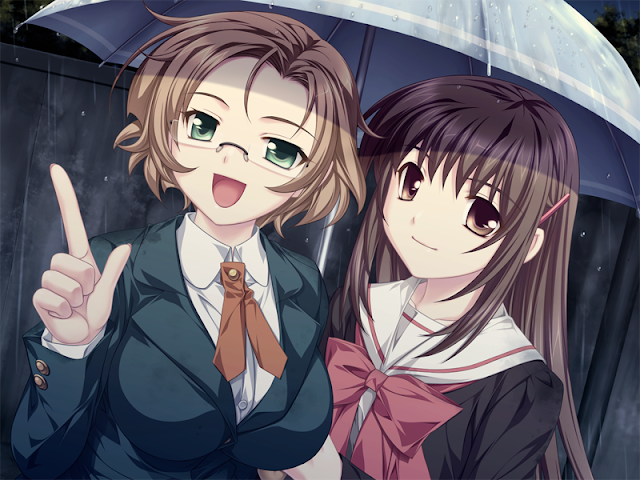 The bulk of the game is just these everyday life events. Pacing is really bad, and no end to these seemingly boring events is seen. Nothing really happens on a grand scale. So reading this game is a huge pain for plotge enthusiasts. First three routes are just fillers from usual reader point of view. But this is not a normal visual novel, it can't be dragged to conventional genres. That's why I called it character mystery story. Every character is a mystery with his gift, curse and anxieties. It's not just usual hair color and personality differences. Every character is a whole world of mystery here. And if you don't want to solve this mystery, then you don't follow writer's concept and won't be able to enjoy the game. Each heroine is equally important, Rui is same important as Akaneko in True route with all the final revelations, that's why (and also for the pun) Rui name is in the title despite her route being as plain as possible. Another important trait of these game is that everyday life events only seem pointless, repeating and random. In fact, each single event has a meaning, and as such is a very important brick in building this ever fleeting trust. 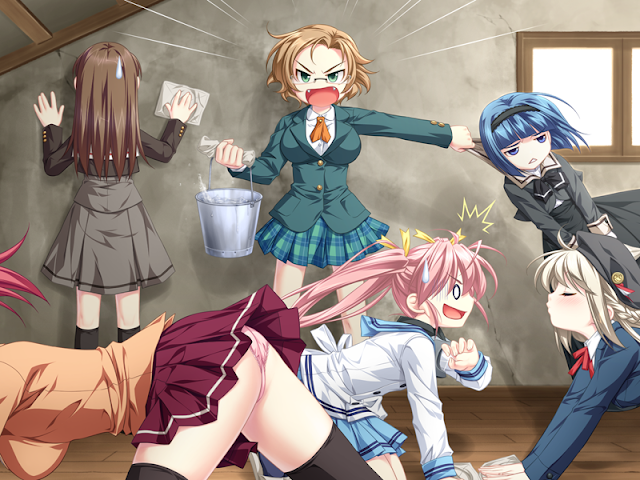 So, this game has a pretty shallow story. Characters might be interesting and all, but what can draw reader's attention and make these heroines alive? What makes us want to solve these characters mystery with concept being this dull? Basically, it's text. Text is super solid and mature, but it's also a  great comedy based on puns and broad cultural references rather than usual perversion. Remember Saihate no Ima and Cross Channel? Text is this good. For me nothing can beat Youko talk, but Akaneko is a worthy rival as crazy generator of puns, teases and references. But why those games are 10/10 for me and Rui wa Tomo o Yobu barely makes it to the masterpiece level? For me it's trap protagonist. He makes every scene physically painful for me. His female voicing and proactive behavior during H scenes make things only worse. 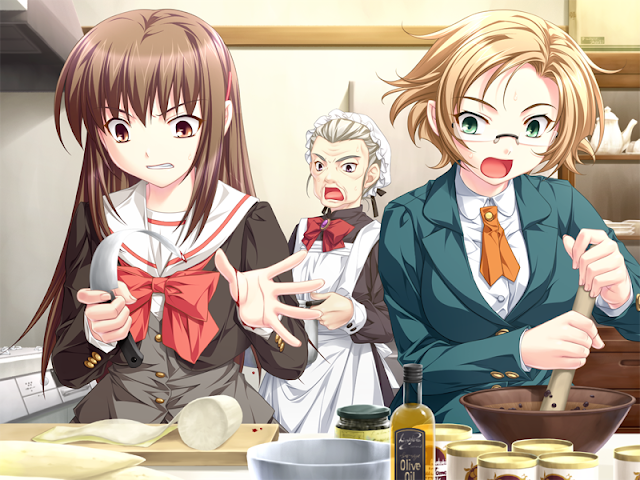 Rui wa Tomo o Yobu is the ultimate trap game. Never again trap protagonist will be portrayed with equal appeal and complexity in a game with this high text level. Tomo lacks usual stupid trap anxieties and behaves absolutely normally as it's his natural state, he is raised like that for all this life. It's the best game for breaking trap prejudices. But I can't put up with it now. Maybe, later. 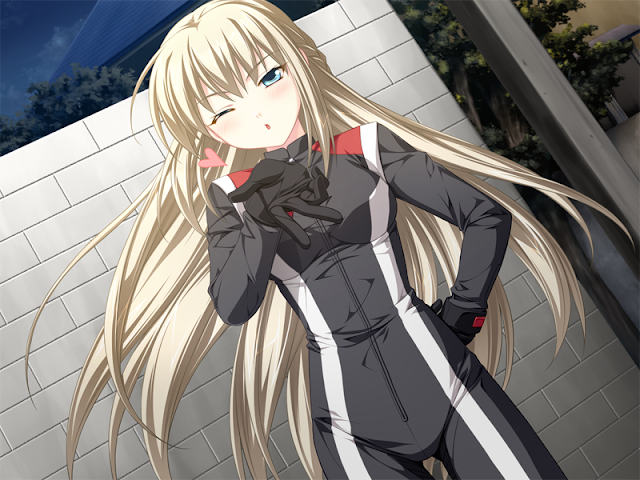