Foreword: Never faced crossovers in visual novels before, so expectations ranged from weird fandisk to something like Soukou Akki Muramasa since I rated both original games high. 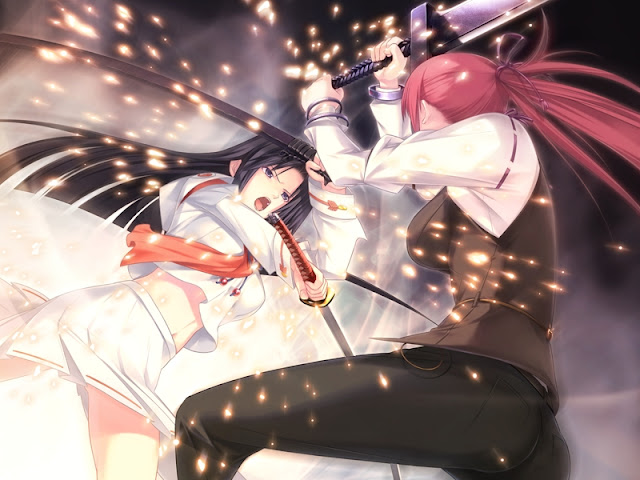 Synopsis:
Depending on which route you choose, you start out as either Alfred Arrowsmith, after his united front with Rick against Gustave, or Kuki Youkou after his final confrontation with Soushichi. Ungaikyou (literary means the mirror beyond the clouds), a youkai made from the failure attempt of the mirror of the three artifacts belonging to Amaterasu (the Sun god in Japanese mythology), has chosen these two to help them create a world of their own. In exchange, Alfred and Kuki are temporary exempt from going to the netherworld and finish their lingering desires…in their non-respective worlds.
After the completion of the two stories, the final route—Chronobelt—unlocks. Almost immediately after Kuki and Alfred finish dealing with their lingering desires, invaders have slipped through the portals and into the Infinite Corridors (the space connecting the two worlds). Before long, team Ayakashibito is in a constant war with team Bullet Butlers in what can only be described as the city of Chaos.
Youtube: https://www.youtube.com/playlist?list=PLs4Gp5VU4Fv-PwZGYTHAmfELzDEYeRcXZ

There are three English reviews (1 2 3) which actually portray the nature of the game vividly, but I could not understand some things from them, like length, structure of all three parts and how H events are incorporated. Basically, I needed decide for myself whether it's a fandisc or stand alone complex story. 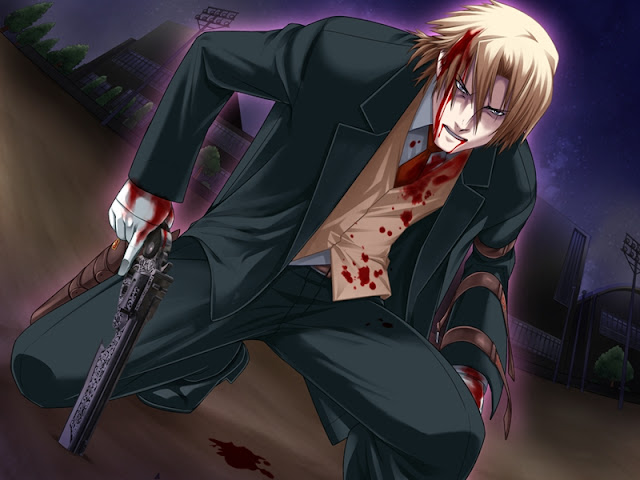 So, there are three parts - Ayakashibito where Rick helps to prepare school festival with Ayakashibito characters, Bullet Butlers where Kuki fulfills his revenge wish, and Chrono Belt where Soushichi gets in a time loop and faces antagonist together with other heroes. And I already see a problem here. Three separate episodes mean an anthology, and I seriously don't like anthologies. This time it's all familiar characters already, but three loosely connected stories with three different characters is not how a normal game should look like. If it's an integral work, then is there a connection between these stories? There definitely is. Basically, all three happen in different worlds, and there is a travel between these worlds by a means of some mirror or something. That's a very loose link. We basically destroy two perfectly normal worlds with additional supernatural elements just to satisfy our need in crossover. Are first two stories really needed for Chrono Belt? Actually, nope. These stories are introduced just to give Rick happy childhood that he never had and to show coolness of Kuki as he fights enemies of his specialization - youkai. 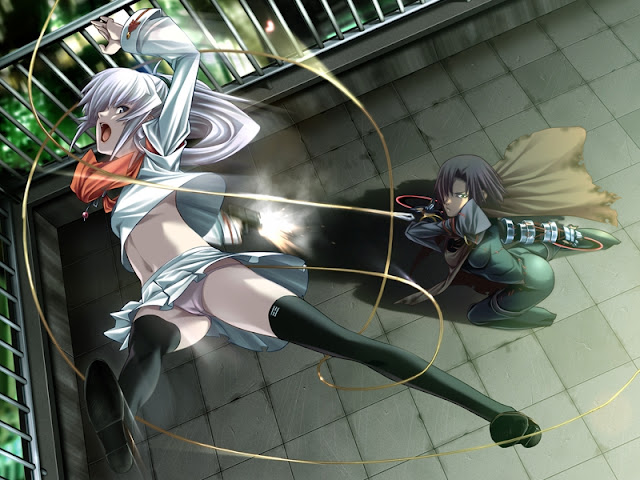 How long are these stories? Rick episode has a lot of characters communicating with each other for some time, so it takes it rather slow ending up at 8 hours. Kuki episode is shorter and more straightforward, so it ended at 4 hours for me. Chrono Belt took 9 hours for me. These are pretty short lengths for finished stories. As for endings, there are just two branches at the very end with the final decision. It looks less and less like an integral game to me. There is also one unskippable bad ending linked to the nature of time loop. And it's a very bad ending when you need to do same things like 10 times over and over and get tentacle rape scene. Good job, Propeller! 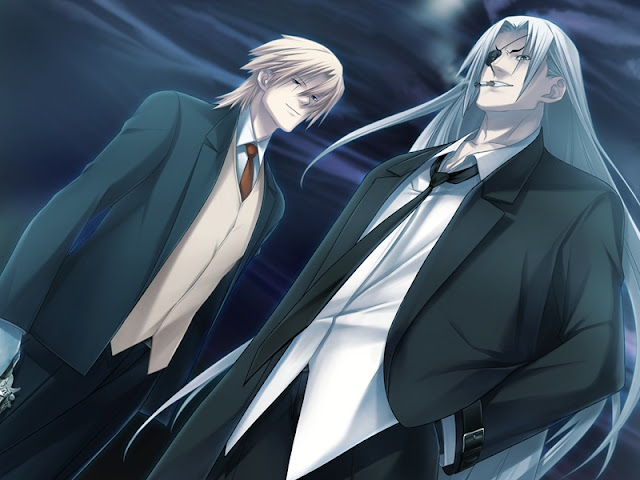 What are the most distinctive traits of a fandisc? Random H scenes, naturally. And Chrono Belt route is full of them. It all follows the same flow - Soushichi decides to go to some place - there he meets and spontaneously violates a girl - time loops back to where it started. Rinse and repeat with all the available girls. It's an absolutely disgusting move to introduce travel between worlds, time travel, get two rather conventional routes for each of the game just to throw in a nukige at the final True Route. I absolutely can't stand game's structure, nature and concept. Oh, and H scenes are same ugly as in original games. 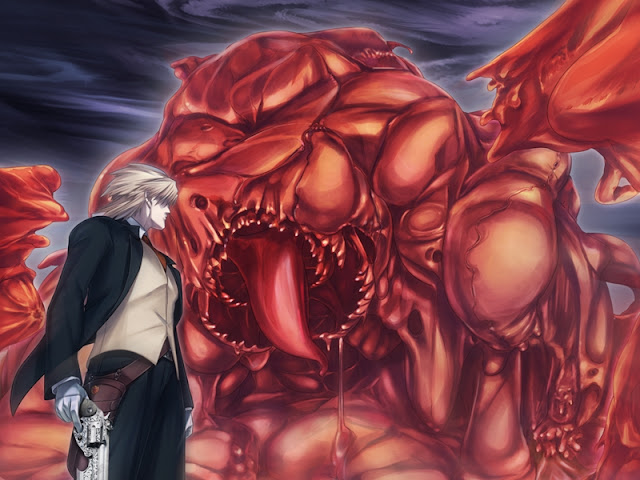 Hey, but did not I just put a masterpiece score for Chrono Belt? I did. The reason is that whenever I start to actually read those routes, they are really great. Not all heroines got much screen time, but writer really tried to saturate every second of gameplay with awesomeness. Dialogues, events and battles are top notch. I seriously dislike this stupid time loop as well as some innate murderous intent against characters of opposing game, but it's a very enjoyable read with nice additions to characters' personalities and cool ending. 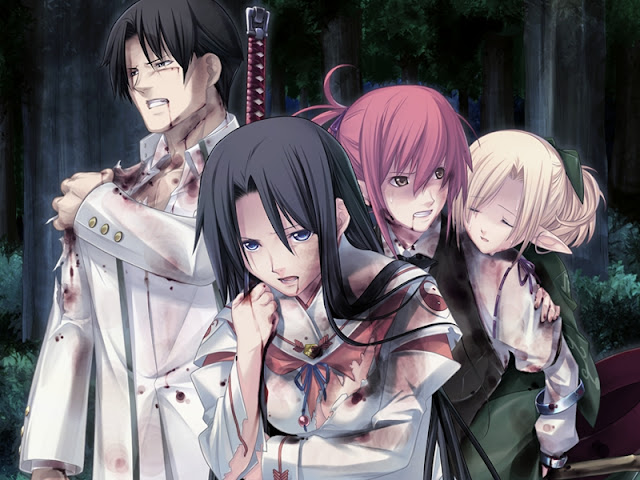 So, in conclusion, Chrono Belt is not a sequel or an integral game. It's a fandisc from all the sides - structure, length and H events. But it's a fandisc of two fantasy fighting plotge, so there is enough extension into chunige to appeal to all fans. I can't rate a fandisc any higher than that. I would not even recommend reading it if you don't want to see such detailed and finished stories to erode with sudden time and space continuum shifts. But if you liked both games and can get over some conventionality, then it's an enjoyable read and worthy addition to original games, though not outstanding as a separate product. 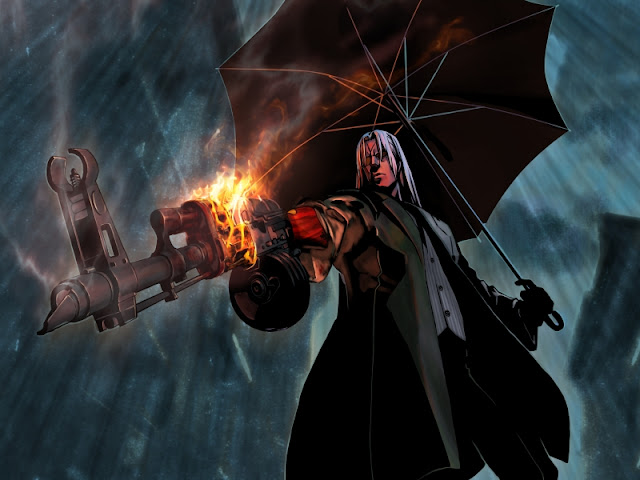