Foreword: Game looks like a chunige, so why not try it. 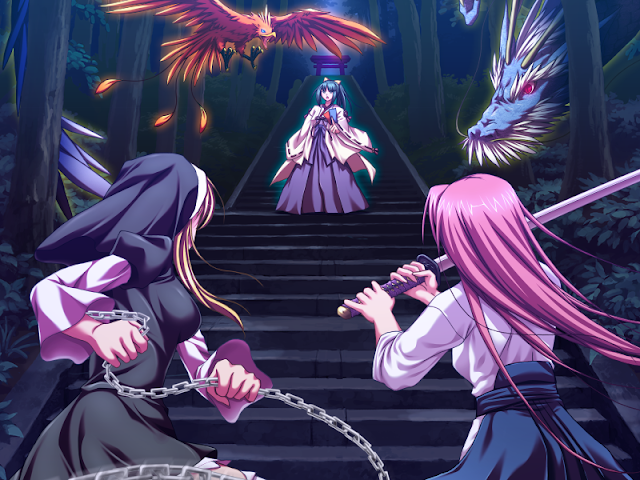 Synopsis:
Shinobu Shindou was an ordinary highschool student.
Except for the fact that he lost his memory 3 years ago.
He heard that it had to do with an accident that occured back then.
The shrine that he lived in burnt down, his parents passed away, and he was heavily injured.
But even though it was a big incident, no one knew what caused it.
Shinobu didn’t remember what happened either, and he wasn’t even certain that his real name was Shinobu Shindou.
Losing his memory, losing his parents, he was only left with a feel of loss…
The people who supported him in such situation were the members of the Morisaki family who had relationship with him since his childhood. Thanks to them, Shinobu was able to live a fairly normal life. He passes a peaceful time with Chisato Morisato, supposedly his childhood friend, her mother who was the head of the Morisaki family, and his other friends.
But Shinobu feels he somehow doesn’t belong to this peaceful life.
“There should be something I must do…”
In order to ease his frustration, he heads to his home shrine where there is only a small monument left. This was where he always came when he had things to think about.
When he swept the site while thinking about things, he felt relaxed. While doing that, a mysterious girl visted the site and left after telling him it’s dangerous here. When he was still wondering what that was all about, something attacks Shinobu. That didn’t look like a human or an animal, …but a monster.
Even though Shinobu practiced swords with Chisato, he couldn’t do anything with a bamboo broom and was quickly cornered to the wall.
When he thought it was all over, the sacred tree left in the Shrine gave off a shining ray of light.
“Sigh, I can’t sleep when it’s so noisy here”
A girl who appeared from the light and spoke in an proud tone said she was a god worshipped at this place…
Youtube: https://www.youtube.com/playlist?list=PLs4Gp5VU4Fv89vaz_V27rB7frcjdRGaG8 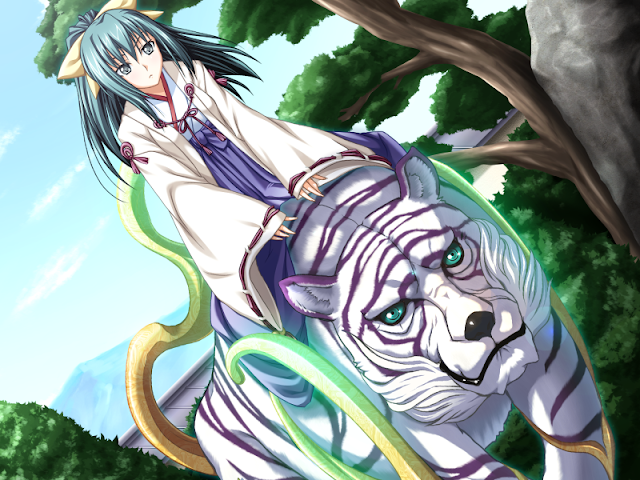 As usual, took the game for review blindly due to synopsis, but game already looked fishy with no scenario writer name and a total number of Japanese reviews being less than fingers on one hand. 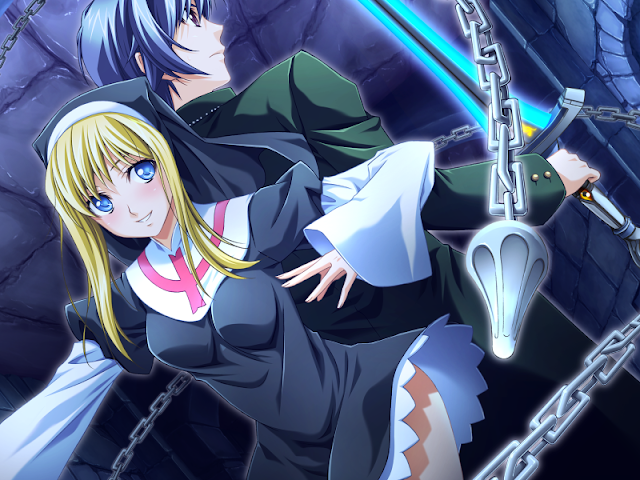 It's a deeply flawed game that's really hard not to drop, so I'll give away some plot spoilers. So main character returns to the place of the shrine where his parents died in a fire only to find an army of evil spirits led by Rasetsu who appeared in nightmares and Nayuta to take revenge on protagonist. But MC has amnesia (of course) and can only survive with the help of a goddess of a sacred tree who appears naked (of course). For some absolutely unexplained reason a whole bunch of warrior girls pour into the scene - Chisato, Rei and Ran. And since it's too troublesome to give a normal outcome, MC just faints and regains consciousness when everything is over. Convenient. Then SOL segment begins which is suddenly interrupted by appearance of Church agent Alice Crawford and sudden defeat of one of two enemies - Rasetsu. Individual routes vary to some extent, but eventually Nayuta awakens dreadful God of Destruction... who gets defeated in one hit just because MC remembered some deadly technique. SUPER convenient. 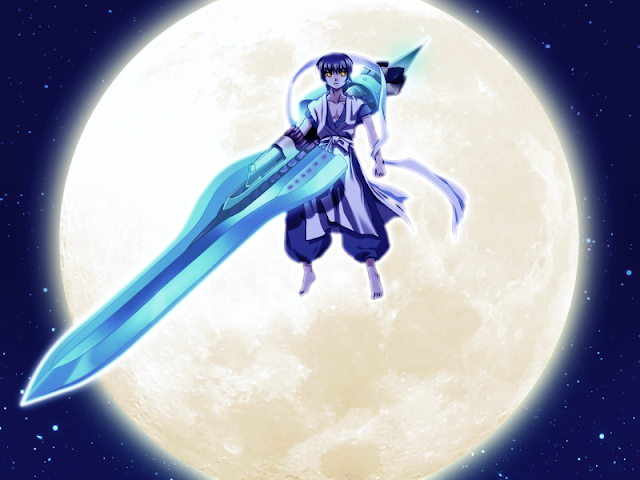 Scenario is a hell of a mess. But I was also irritated by normal battles during patrol sequences. They use some rock-scissors-paper system for attacks and blocks and timings to take decisions, but they have absolutely zero meaning and can all be lost without any consequences. In this regard game really reminds me of Tamayura by Akabei Soft2. These battles bring nothing but irritation. By the way, spirit of the game also resembles Tamayura as both games center around shrine maidens that strive to strengthen spiritual barrier. 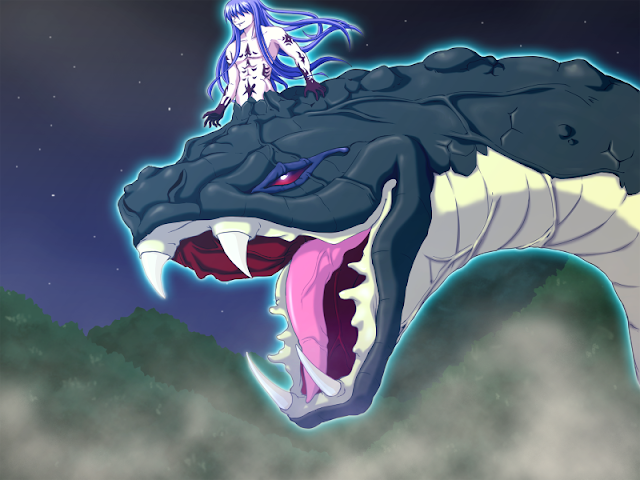 Samayou Mitama ni Yasuragi no Toki o actually has much development for that minuscule length of 3 hours for common route, plus just 2 hours for each individual route. If there weren't five heroines, it would fit in just one video that's limited at 12 hours for youtube. Tempo is really bad. Explanations are scarce. Heroines are neither developed, nor moe. There's no humor worthy of mention. Game is so cliche and bland that there is basically nothing to talk about. Oh, and I hate all the stupid epicness. Well, art is actually pretty good. 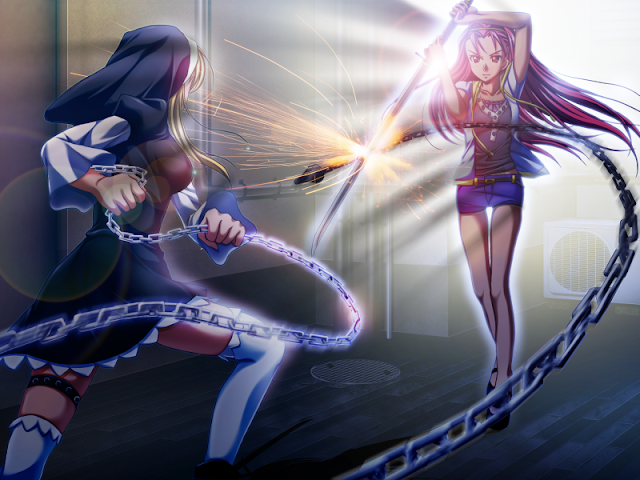 Wow, I have not encountered such trashy chunige for a long time since Toki no Kairou, Answer Dead and Ochiba no Mau Koro. What unites them is that they are unpleasant to play and also leave a bad aftertaste. Still, even such experience is useful as we need something to compare normal games with. 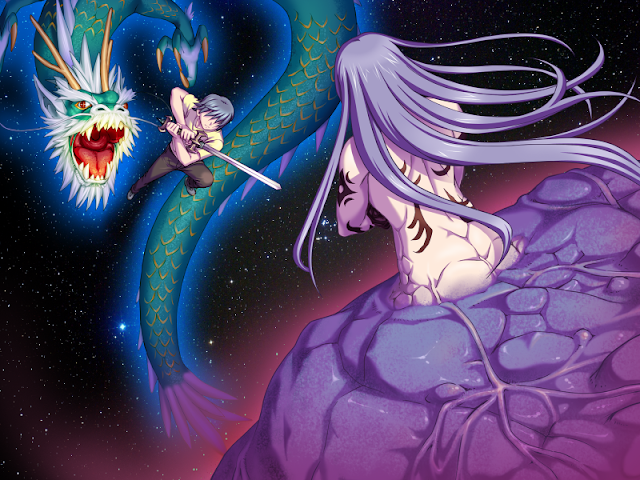