Foreword: This is Kanno-san's scenario and I could not miss on it. There are a lot of good English reviews on the game so I'll try to just add some additional thoughts I have on top of those reviews. 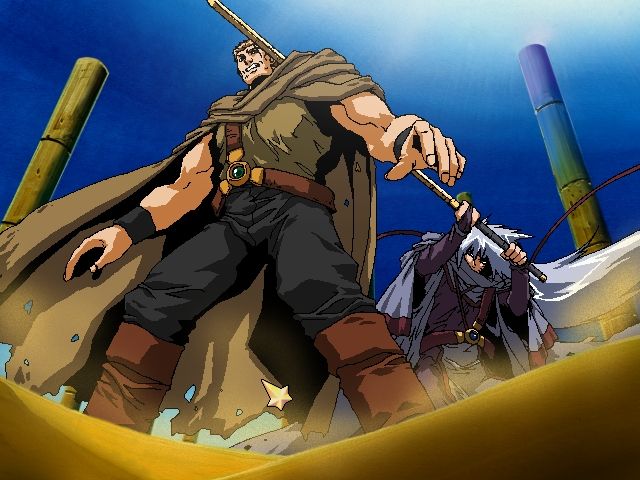 Synopsis:The year 2000. Kasumi Shindo is at first glance a run-of-the-mill high school student in modern-day Japan. However, beneath his normal appearance, Kasumi is in fact a top-notch treasure hunter. This time, Kasumi is aiming to seek out the lost 11th Commandment of Moses. Kasumi discovers that his childhood friend, Reina Tachibana is in southern Europe participating in an archeological dig. Pretending to be a tourist, he visits the excavation area and manages to get put on the excavation staff. But he is not the only treasure hunter looking for the Eleventh Commandment of Moses and before he knows it, he's embroiled in a dangerous adventure.

Structure: There are three stories - one 1200 B.C. fantasy story, one 2000 A.D. treasure hunting adventure and 13,800 A.D. future anti-utopia fantasy. Story-lines exist pretty much separately only to be loosely connected by girl Will and flashbacks from the other time to help on puzzles. All the lines coincide in the last chapters of last "Future" Volume 3. So basically I consider first two stories to be preparatory and I'll focus only on 3rd Future story. I feel that the chosen composition is wrong - it's 1st chapter of Past, then 1st chapter of Present, then 1st chapter of Future, then full Present, then full Past, then full Future. In my video walkthrough I went for showing full Past, then full Present, then full Future. This really feels more logical to me since all the roots and the Will story are in the Past. And when seeing all those first chapters one by one and then Present my head was already blowing up from the characters and the kind of mess it created. 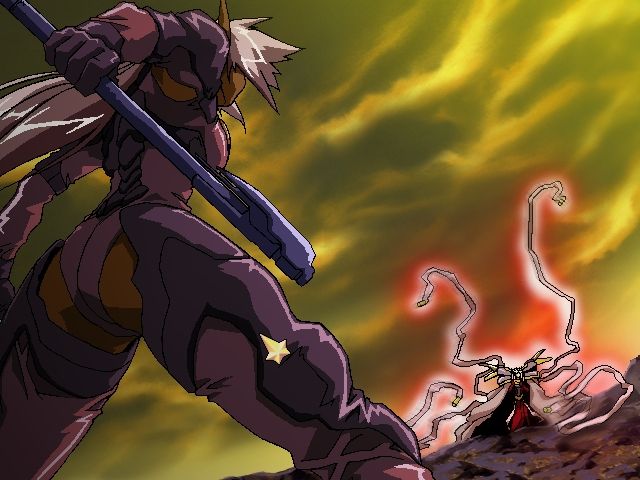 Difficulty: DVD version is supereasy, but I got stuck once at a puzzle that was not properly described. I left a link at VNDB discussions page of the game to prevent other people from wasting time.

Rating comments: Why such a high score again? Well, VNs are akin to literature, what matters is whether I like it or not. And if I like it, there's no point thinking which one is better. I really loved the story here - arigato, Kanno-san! And that might easily be 10 if I played Japanese pc version. There are a lot of protagonists in this game and I have grudges to some of them. I think I'll develop on it in characters section. I also blame the structure as video is not as engaging as game and pouring all three story lines all at once was very confusing and only belief in Kanno-san actually made me unwind this mess. But when things get clear, it's a very engaging story - thus the high scores.

Protagonist: There are too many of them.

Characters: There are three sets of characters. The setup of characters on the screen changes a lot with the story. Let's look at characters in bulk, according to their epoch. 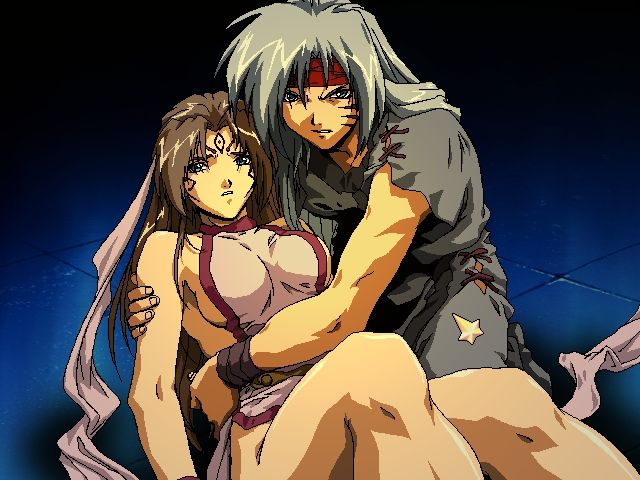 Past: Main characters cast are a swordsman Ales and his foster mother Masa. Masa bears some strange tattoo and she sends Ales to find Will - another girl with such tattoo since their fates were linked and Mother Spirit was calling to do that for some reason only Gods could understand. But in order to pay a visit to the God one needs to gather sacred books of elements and oracles of those elements. That's pretty much what we do during the whole Past chapter. Of course we find Will as well under strange circumstances. So Ales is a pretty straightforward swordsman who fulfills the will of his mother and who protects those who are dear to him and... pretty much everyone else, even his enemies, lol. This is a traditional fantasy story, so there's no need for quirky characters, but without some gameplay it's quite boring to watch. Well, some of the four oracles are pretty cool/funny so they ease the tensions and their interactions basically save the narration. This part is seinen enough, but it gets to be pretty dull due to very serious characters and lack of fights. 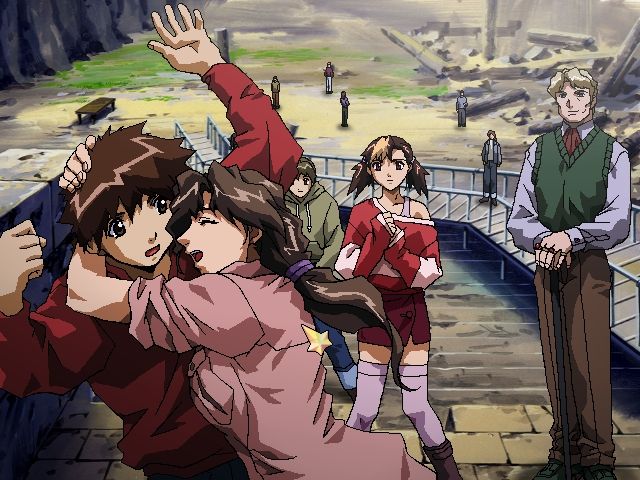 Present: From left to right we have Kasumi, Ai's sister Reina and fiance Ai. Reina is much older and already divorced - she is always flirting making Ai mad. Kasumi and Ai actually only met 10 years ago and they they fight all the time over everything. Kasumi is basically interested in money and treasures and he does not really encourage Reina moves. Ai is also quite stingy and only Reina moves bring her tolerance to the brink and she starts acting aggressively to any "oppai" girl near Kasumi. That creates some comical situations, but at the same time is an eternal source of drama. And the further it goes, the more drama it is. So at times it was really nauseating. And at some point I got somewhat disappointed in Kasumi as well. It was at one scene where Kasumi was getting down to the den on a rope. Ai threatens to jump down from that insane height if Kasumi does not take her with him. Here's the exact extract:
- If not, I'll kill myself.
- Then die.
- I will die.
- Die right now, here. In less than 10 seconds.
- Meanie. I'm going to cry.
- Cry if you can. Cry.
It's presented in a comical manner, but it was not funny for me. Too much relations hustle, predictable characters' behavior and lack of intelligent talks did not let me enjoy this volume. So it's a great shounen story, but I can only appreciate seinen stuff. 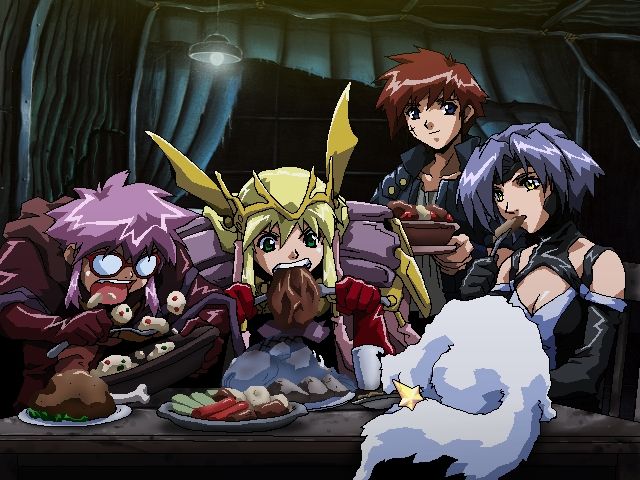 Future: The cast from left to right is scientist Titi, secret royal family descendant Sui, self-supporting town boy Tatsuta and Sui's bodyguard Laily. Oh, and don't foget this animal... something (squirrel?) Railulu. Sui basically plays the role of straightforward and cheerful bakagirl while Laily is reserved and she does everything right. Titi is a chatterbox, she usually supports Sui in everything and provides scientific advice when needed. Tatsuta is a usual town boy who lives alone and who this time allows girls to have food and shelter for a mere trifle - wedding Laily! He's pushy and manages to win her heart little by little and this sideline is really nice. 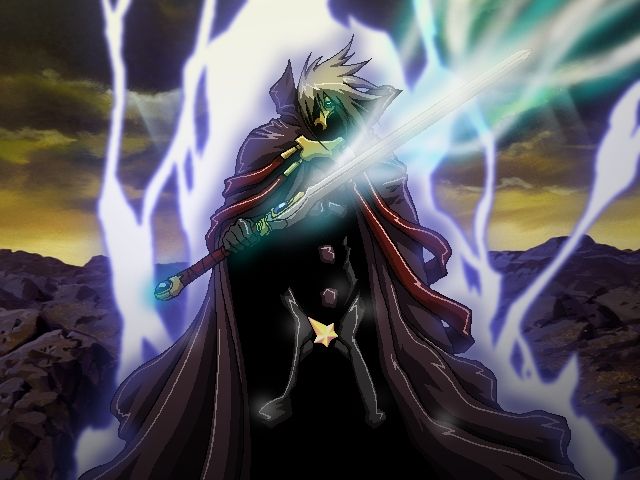 Story: I seem to have tackled a lot on story already, so let's finally focus on the main part as I see it - Future 13,800 AD. For 40 years earthquakes and acid rains devastated the Earth burying the scientific civilization and the remaining humanity declared science outlaw in order not to repeat previous mistakes. The royal house monopolized the right for science as people needed to survive somehow in this barren wasteland. Royal house suffers from a spree of coup d'etats and this last king is a very cruel man who's seeking for descendants of former family and especially for a girl matching Sui's description. Sui and Laily's foster mother asked them to find some Uu person and give him the Key of Will. And they have no idea where to search for those. That takes first half of Future story and the second half is meeting the guys from Past and Present and together facing their fate. 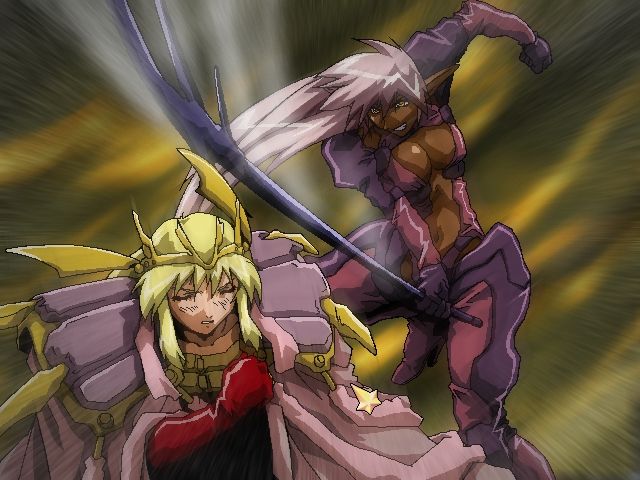 CG: I seem to be not demanding towards CG quantity but this game has a whole ocean of CG - even many small actions have one. Game really tried to look like an anime so it has some animated sequences and a lot of screen changes. Outside of my habit, I'm not going to post gore CG this time since there aren't many of them and they can be spoilers.

HCG: None since it's initially a PS1 and dreamcast game and only much later it got PC version version. It's a very funny version to see since usual CG have low resolution and PC HCG are of very high resolution.

Sound: The good part is that it's full voice even with all the protagonists voiced. The bad part is that some lengthy conversations with side characters aren't really voiced or voiced up to 3-4 phrases. It does not hurt at all, but just for the justice sake let's say that it's only about 85% voiced.

Humor: Future part is culmination and it has quite much humor in it. One example is that Layla always apologies to Sui and says "It must be in my character". For the first times it looks ok, but later she tells the same thing to the very little notices like you look moody today or is it you stomach growling.
There was one fabulous joke when Titi, Sui and Laila with Railulu needed to see guards out and they consequently tried to use sex appeal on them. First Titi failed with her charms, then Sui was ignored and sent off and then came this. 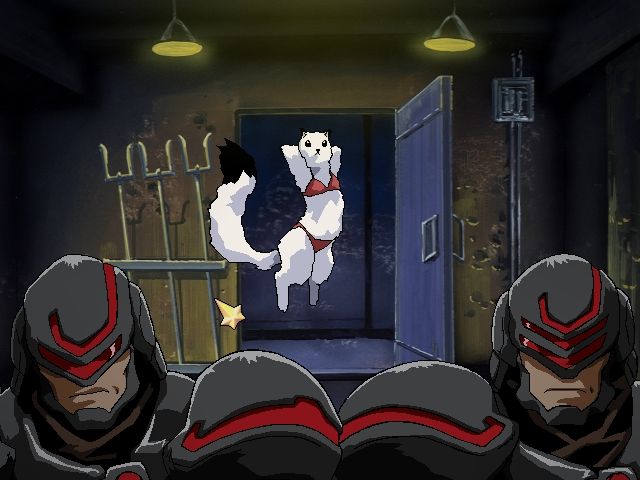 Game also uses repeats wisely. In this very scene the fourth try was Layla's and her appearance actually melted men's hearts and maybe something else as well. In another scene later on the three girls were trying to get food and shelter from Tatsuta and he asks a girl to become his wife. Titi and Sui blush and say they're not ready and here's the except:
- But let me tell you something, I have no interest in cow breasts or eyeglasses monkeys.
- ....Raylulu? What, are you...?
That was pretty awesome.

Themes: It's mostly and adventure work with pretty straightforward characters, but there are couple themes that I was able to discern:
1) God's will VS human logic. This is the major theme of the game. All the time we're asked to do weird things. Seemingly horrible events occur due to some god's will without much explanation. The future part is the one where this conflict becomes the culmination of the game and heros are confused what to do - blindly follow God's will or send the Gods to hell and try to preserve humanity as it is. You can guess from the game's title which side wins.
2) Sacrifice. There are quite a lot of sacrifices in the game. Sacrifices are the least logical thing to do and yet so many characters choose it over persecuting their own goals. As one of the character explains: "Death is not the end. It's the beginning". Well, it falls in perfectly with the first theme. After all, it's the game about God's will and it's a difficult topic to develop since irrational actions won't get much appeal. Still the game does its best in that and sacrifices are seen as fulfilling some selfish-less desires for the greater good of others and at least look organic with the setting.


Overall comments: By now it should be evident that Guilty Exodus was much to my liking even though I tend to dislike religion and shounen stories. My first reaction was akin to that depicted in beliar review. Too much information poured at once, seemingly meaningless dull talks, false drama, religious preaching, random events, lack of gameplay. It's a different work that we usually get to see in visual novels. We got the worst release of the game translated - DVD video one. If it was a different release - it'd be a perfect game and I would not need to rant at all. If it was a different release, we'd need to pay great attention to game progress because it would be a gameplay issue. DVD release is basically a video with just a few meaningless choices so it's easy to get distracted, listen to it only as background and inevitably compare it with compact and fast-paced anime works. Guilty Exodus is very demanding to the player right from the start. It's easy to get confused with all that information. But if you take it seriously, you'll be able to enjoy one of the best stories written by Kanno Hiroyuki, on par even with YU-NO. 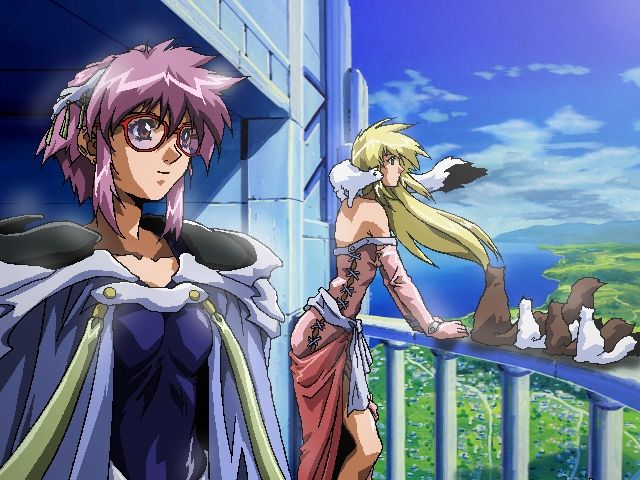