Foreword: It's a C's Ware game and these guys have not let me down even once. Unlike Re-Leaf which has quite a clear synopsis and multiple endings, this work is much more mysterious. I thought I'd get just another rural slice of life with some side mystery, but what I got was an ancestor of Cross†Channel with a global anomaly and looped story. 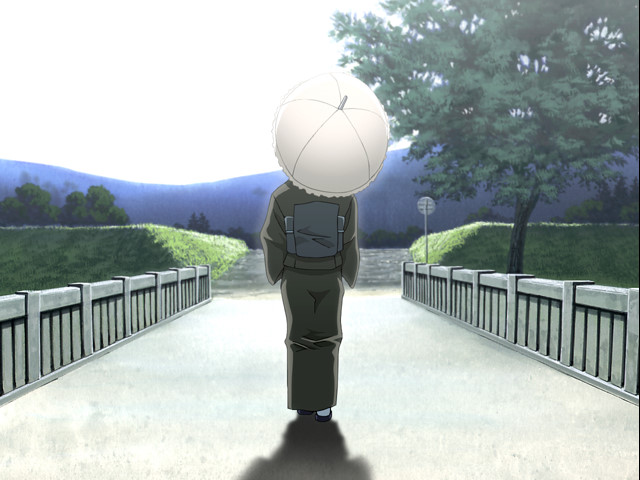 Title: Kazeoto, Chirin (I'd translate it as "Sound of bells in the wind")
Developer: C's Ware
Date: 1999-09-10
VNDB link: https://vndb.org/v4332
Length: That's tricky. Some 5 hours for first playthrough, plus some 4 hours more to get other routes to the end. It actually took me more that 15 hours due to a complicated walkthrough and confusion of the true routes.
Game type: Global mystery rural story.
Difficulty: Medium when you get  how it's organized. For me it was very high since even choosing locations in wrong order can lead to falling out of heroine route.

Synopsis: Satoshi, the protagonist, and his best friend, are both college students who came back to their old town to spend their summer vacation. But residents suddenly start to disappear without any reason. The most optimistic versions are that people are being spirited away or aliens abduct humans or that an ogre comes down from the mountain or that yakuza sell people into slavery because of debts. Hero does not care till the closest people to him start disappearing as well.

Structure: Game takes place for 8 days from July 31st to August 8th when the Obon festival is held. 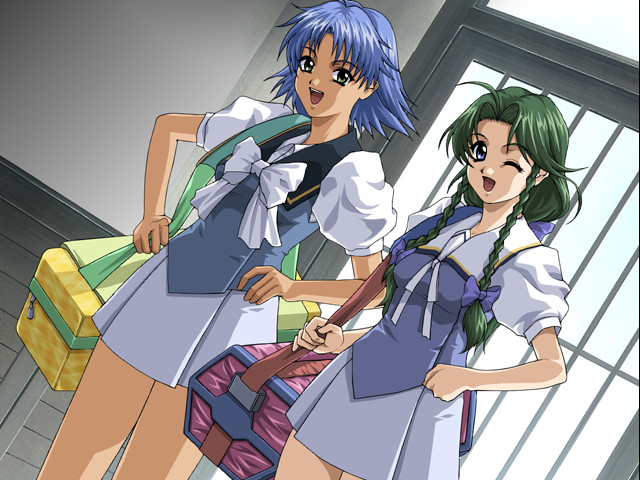 Rating comments: It's a good game with great atmosphere, main idea and nice events. But heroines aren't charming enough. Out of six heroines I liked only Ageha, because she's a diligent student, hard-working keeper of a boarding house, loving older sister of Kanako and tsundere-ish at the beginning and very reasonable later on. Protagonist is a university student, but he's quite passive and he does not care about disappearings till his friends get missing, so it's a minus for him. Game quality is high, but I had to undergo through a lot of repetitiveness since heroines don't have their own routes and the difference is mainly just in several choices. If you watch my video walkthrough, you won't see that repetitiveness since it's cut there, so I hope you get to like this game even better.

Protagonist: Satoshi-san is your ordinary megane university student. As he admits himself, he just goes with the flow and never really gives attention to studies. When Ageha asks him to help with the university summer homework on maths, Satoshi says he's in humanitarian division and that he "avoided" math entrance exams to the university somehow. And he has amnesia and is trapped in the eternal loop of 8 days, so he has all kinds of memory flashes all the time which does not help to concentrate on something. To the left is Satoshi and to the right is his brother Bozo (such is name when he's called in game) which i ended up calling Boshi and synopsis writer on VNDB called him Takeshi. Bozo is more of a playful type. He's fast to know the news and always eager to help. 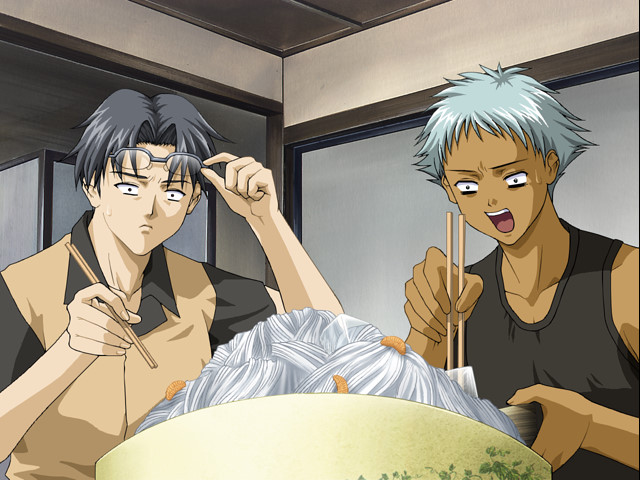 Characters: I wanted to talk about heroines in bulk, but there's no good joint CG, so let's run through them separately. First of all, there are no separate character roots. Secondly, there are no romantic feelings at all here - all H events happen on August 6 out of desperation of two last people in the world. Six main heroines routs are paired by two: sisters Ageha+Kanako, sisters Satomi+Shihori, nurse Midori+patient Ayane. It's difficult to call even those branched routes separate ones since the flow is the same aside from several events and the people who get to disappear first.

Ageha is a diligent university student, keeper of a boarding house and a kind sister to Kanako. She's depicted as an angry comic person in the beginning of the story since Satoshi has not payed for the stay for quite a long time, but she gets to be the most attractive character for me - responsible, intelligent, kind. 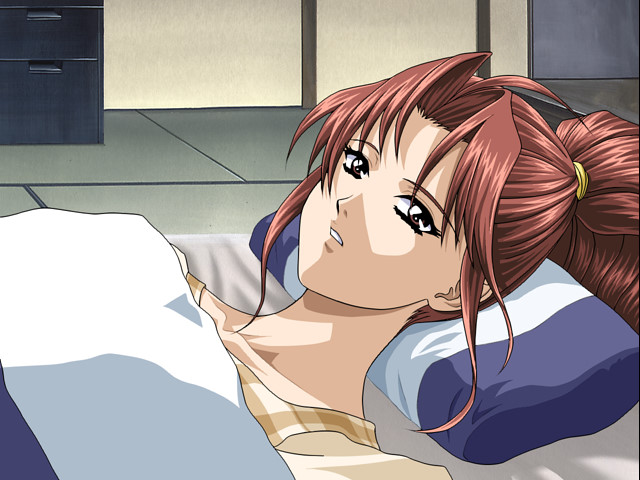 Kanako is a school student, but she runs the soba dining hall almost by herself. She's cheerful and childlish. 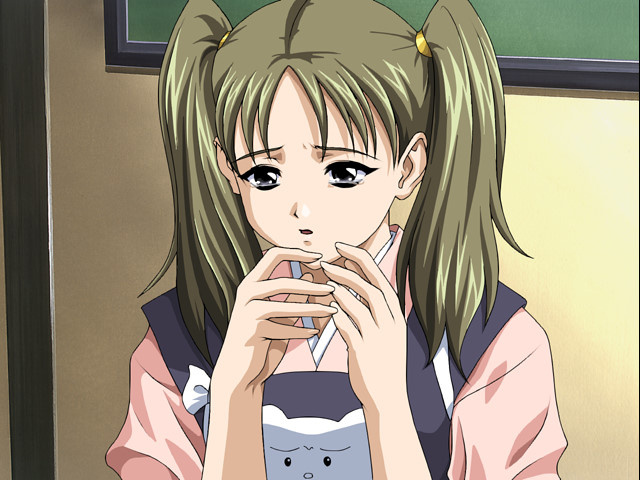 Ayane is the most mysterious person since unless we follow her route we get to see her just once occasionally. She visits the local doctor since she's having pains, but the doctor claims that those are psychological ones after the death of her husband. She's the oldest of characters and she has a complex about here age - she even calls herself obaasan. Well, but she's the most experienced one and she's actually quite a nymphomaniac. 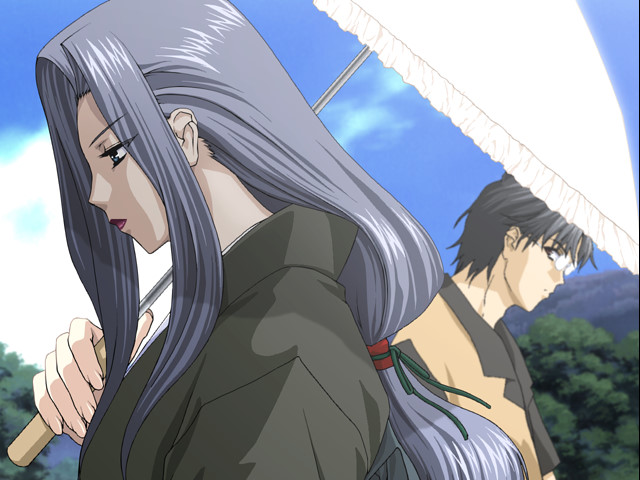 Midori is the nurse in the local hospital. Since she's the most typical character, the writer really tried to pull her out of her role giving her lots of very nice events (in the sunset etc) outside of her working clothes, in casual - at those times she's cheerful and likes to set pranks. 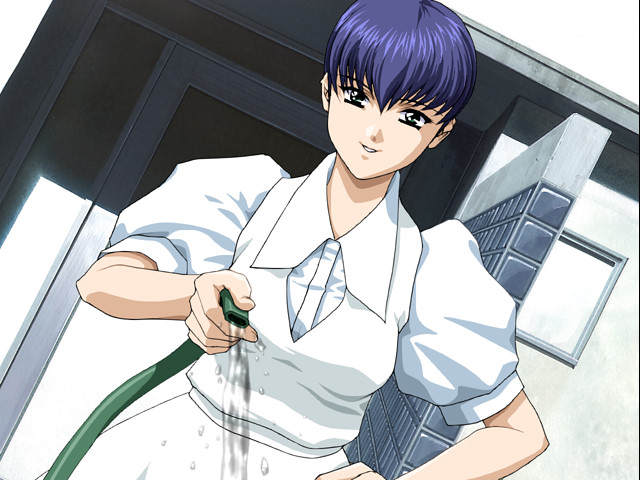 Satomi is Satoshi's cousin. She's always together with Shihori and they have the coolest CG together. Again, the writer tried to give her traits discerning from her sister. So Satomi is cheerful, creative, and workaholic, but she's quite irrational. 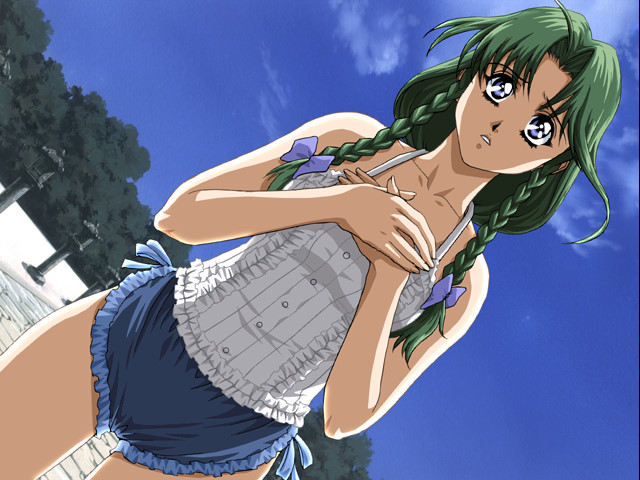 Shihori is Satoshi's cousin. The more rational of the two, but she hates cooking and working - more of a city girl. Together with sister they came for several days to rest and see their cousins and their theme is to get out of the town as soon as politeness allows. 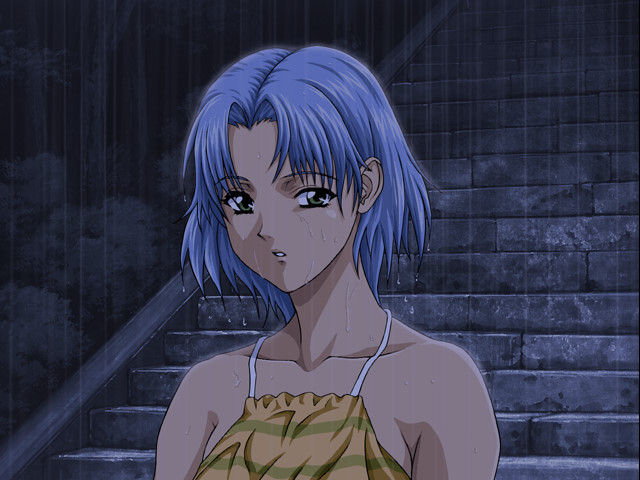 Hibiki is the joker of the game. She only appears on sunset before the end of the day to say some cryptic stuff about the time, the universe etc. Her route is the true route that opens up after clearing all the six heroines. A lot of questions are getting answered in it, so any additional information would be a spoiler. 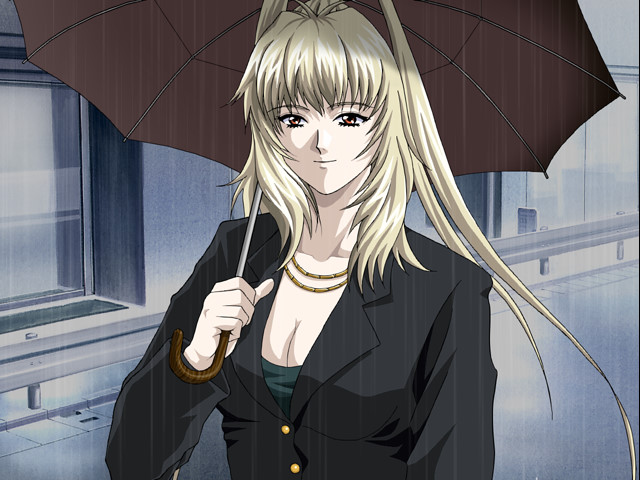 Story: Satoshi and Bozo don't have real plans. They just wander around the town that's very ordinary rural town without any discerning feature. There's an Inn, a Soba shob, a souvenir shop, a marketplace, a river bank, a bridge, a clinic, a shrine, a bus stop, a small square with a bronze statue and that's it. Then their cousin sisters arrive and they get a full-scale investigation of the time once more. Here and there there is information that some people get missing, but it's usually neglected as people might just go to hot springs or somewhere. Then their important person disappears (who - depends on route) and start searching around. Eventually everyone disappears but Satoshi and one girl by the day of the Bon festival and after visiting this spirit festival the world resets. That's the loop that keeps on repeating. Composition-wise Cross†Channel is better since the hero works towards getting out of the loop by trying to remember things or writing them down in the diary. Here Satoshi is the same each time - first he's pulled in some merry adventures and then he's on the brink of despair. Through next five routes it's monotonous gameplay since very few events change and there's a lot of movement on the map, so skipping is not fast. Hibiki route that comes with everyone cleared finally puts some dots and breaks the loop without any active actions from Satoshi side. Thus Cross†Channel wins by all the parameters - the charm of characters, the humor, the protagonist, but it is a perfect 10 by my standards, but it came four very saturated years later and had some predecessors - including this work - to fix its flaws. 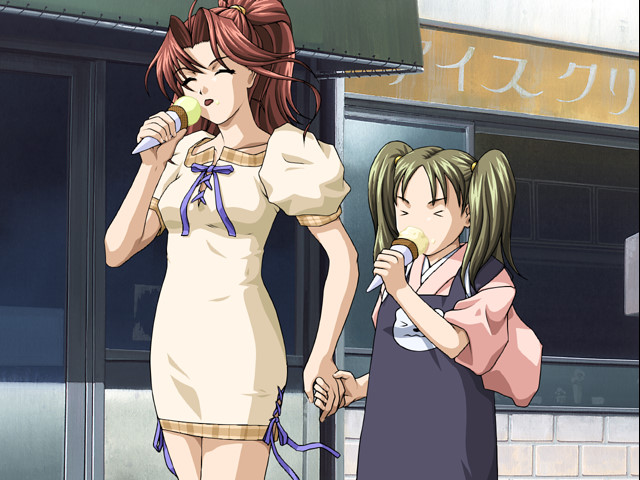 CG: Well, I loved its CG. Heroines are gorgeous there. Best to see for yourself.

HCG: What I appreciated was that every heroine got only one H-event (with some exceptions) - in the end of her branch. Those events are short and involve mostly talking in the beginning and in the end so it's the best type.

Sound: Full voicing except for Satoshi protagonist. Just as in Chiruhana the tunes in the first half of the game are absurdly merry, some sound like parade ones. And C's Ware still can't get sound volumes even since both BGM and Voice for different occasions differ a lot. 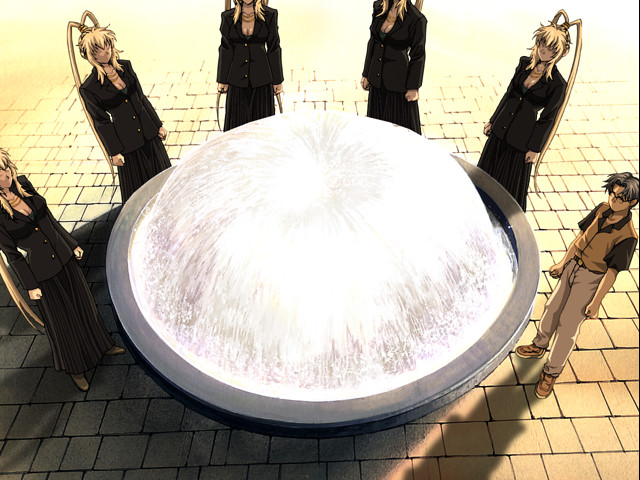 Themes and Symbols:
1) Unfortunately there's nothing deep in the main theme of the game - that's just remembering the truth about his deceased mother and thus breaking the loop. Well, there is some cool twist in it, but I won't spoiler.
2) What's much cooler is the mystic atmosphere that's created. There are sounds of bells heard all of a sudden in this town - some say it's the air, some invent more fancy explanations like plazma. And at some point it gets clear that each time the bell rings a person disappears and then it gets scary. This goes very well wit the Obon festival theme - the most pagan and spiritual festival celebrated. There a lot of impact in spirits roundelay. And when your heroine gets sucked it in it's horrifying.
3) There is a bridge in the town. When Satoshi asks what's on the other side of it - noone can answer. Well, that's weird, but we get to forget about if till the situation with the disappearings gets critical. There's a great scene when Satoshi and Bozo set off through the bridge... and the bridge ends and beyond it there is nothingness. Just insane. What's happening? Is this world not real? AM I ALIVE? That's just a wonderful mindscrew.
4) But the deepest theme is quite unnoticeable. It's when doctor says that he wants this damned rural town to disappear with all of the inhabitants. This hate grew strengthened  in him each day. He wanted to break free of it, but was forced by his parents to return after studying. He even had a girlfriend in Tokyo and they had to divorce because he needed to return to this dump. And this is scary, because it's a social reality. Japanese society in some places remains quite archaic. Oldest son has to inherit the house and even the profession of the father and devote his life to whatever miserable life his father had. Well, in case of this game it was not the Doctor who was the source of the disapperings and notes it himself - at first only outsiders and tourists started to disappear and if it was in his power the whole basis of the town should have rot with its core inhabitants.

Overall comments: This game is very good. It has very nice characters, great global mystery and unique strong atmosphere. It's not an S-class work like Eve:Burst Error, but this little cursed game is definitely a masterpiece for me, something that has an ability create memories. 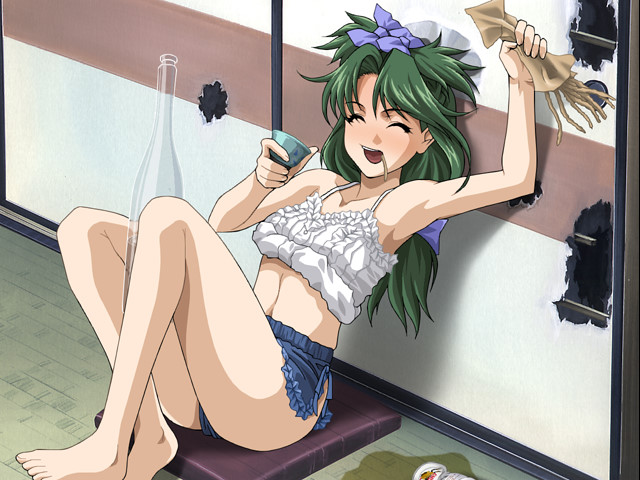