Foreword: I did not have much hopes about the game, but its introduction came upon me as a whirlwind. Mechanical dolls? Knights without soul? Three armored musketeers? Great demon king in person? A parade of deaths? Those were only a few things encountered in first 10 minutes of the game. Game has a very strong start and a strong ending with some nice battles and character development in-between. What's not to like here? 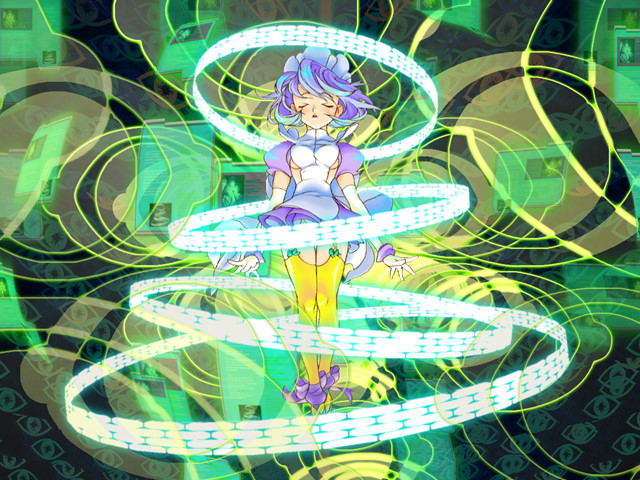 Synopsis: A world devastated by the battle of gods. The surviving people created inanimate "carbon humans" by using the relics of Gods and sealing the soul within. For several hundred years the war lasted. Now carbon knight needs to deter the restoration of the once sealed demon king.
Structure: 13 short days.
Length: 4 hours for one playthrough
Game type: Eschatological fantasy.
Difficulty: At least moderate, since there are a lot of choices and I only got lonely ending while there are happy endings with a girl as well.
Character Design rating: 8/10
Protagonist rating: 5/10
Story rating: 9/10
Game quality: 7/10
Overall rating: 8/10 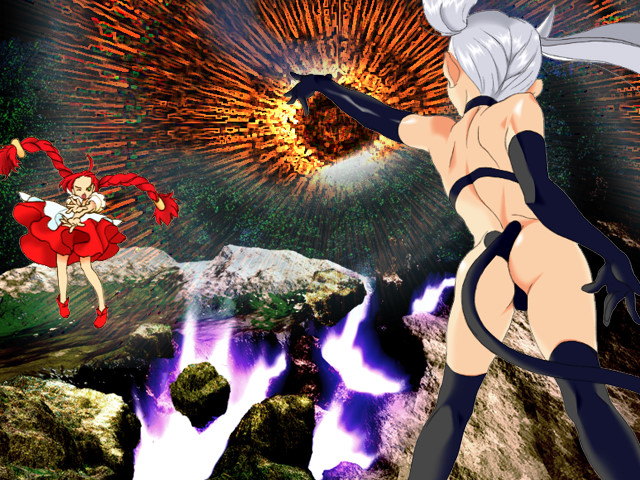 Rating comments: Overall score might be even 9 if I got some substantial epilogue that should exist in some girl ending. The lonely ending I got was too abrupt, but actually cool in itself. Characters are funny and cute enough. They look simple at the first glance, but each of main heroines carries a huge secret behind her back, so I like how their personalities played out. Protagonist is very straightforward, but he's probably needed like that for story's sake. Game quality suffers from big loading times between the scenes. Autoskip function is implemented very poorly. Backgrounds are mostly implemented in 3D, but that's rather a feature than a shortcoming here since those look immersive. But as for the story, it seems ordinary fight the demon king tale, but bears much more in it as it goes, so I rate story very high. 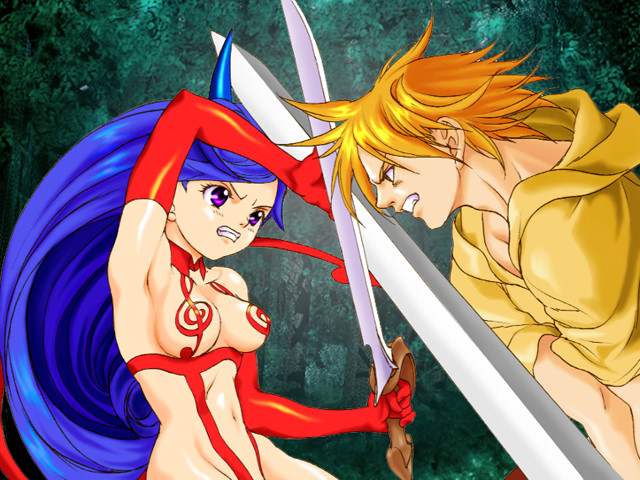 Protagonist: Isaak is shown almost always irritated and/or shouting. He is too straightforward and short-tempered. He's not the most pleasant MC to deal with, but he's not voiced, so he can grimace as much as he wants in silence. 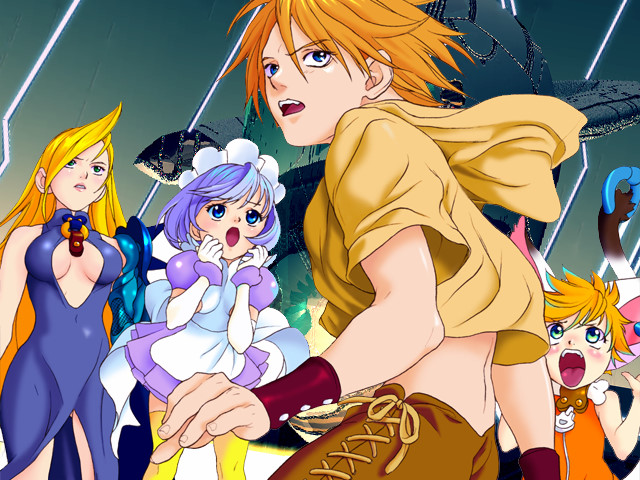 Characters: There seem to be two main heroines - long red-hair Sheckly and short violet-hair Fortita. Sheckly is our usual child friend, tender and caring. Fortita is much more mysterious since she's very short and never aging. She's actually a carbon knight, soulless relic created to fight demonic invaders. She serves to Isaak and his father. There is also father Balzak's fighting buddy girl Gina who gets a H scene if willing. Possibly she can also get her ending, but according to very few and very poor CG gallery that exists for the game good ending confirmed only for Sheckly, just don't cite me on it. There are lots of very colorful side-characters as well. Everyone but MC is voiced, so it's never really boring. 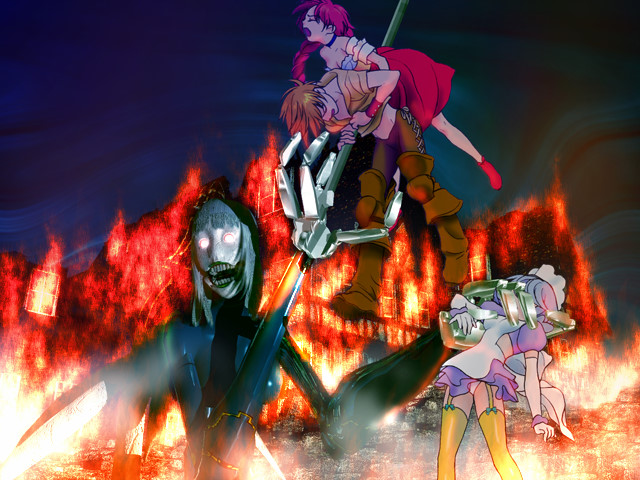 Story: So the game starts in a whirlwind of events. Demon king and his army demolish the city and kill the populace. The three armored musketeers are the only ones who try to oppose the demons. Sheckly, Isaak and Fortita try to escape a group of mechanical dolls. Next we're shown the dialogue between the demon king and the three musketeers and how a mechanical doll comes out with three corpses of Sheckly, Isaak and Fortita pierced. Isaak's father who is one of the musketeers goes berserk and demolishes the demon king... Then Isaak wakes up and those events seem to be a dream on the demon king invasion three years ago. Isaak is dreaming of becoming carbon knight master and goes on a journey with Sheckly and Fortita. There they confront demonic underlings who predict the resurrection of the demon king once all his body parts scattered around the world are collected again. These events take roughly first 15-20 minutes of the game, so I would not consider them a spoiler. As you can imagine, all the demon parts are destined to be collected for a grand confrontation again. But what I especially liked was that the battles of carbon knights and demons started out quite plain, but kept on with more and more increasing numbers of fatalities on both sides nearly wiping all the characters in the game. That was absolutely terrific and unprecedented since the time I saw GANTZ. Just so you know, there's much more to the story than just a series of battles. Every hero has a huge secret and uncovering those secrets make the game really exciting. Ending is surprising as well. 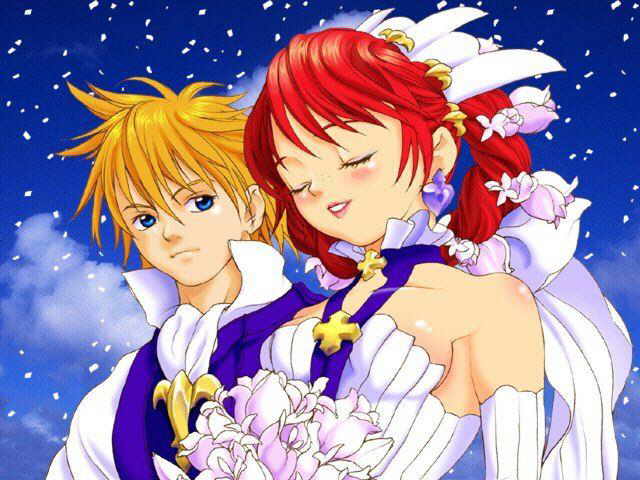 System: So I decided to devise an optional system section since there are issues that don't fall into other sections well. So here I wanted to rant why I only got lonely ending and not going to pursue true ending with a girl. First of all, I value initial game experience very much - and each consecutive playthrough is a torture for me, especially without a guide. Secondly, I know that I like lonely ending the best since it's so cool, a real mortal combat. Lastly, game has very poor skipping feature that has to be turned on in the menu and you can't really stop it till there's a new choice or till a new scene starts. And each scene loads for some 10-20 seconds. It's really not fun doing it again. There are actually two more issues - big number of selections and very poor save implementation. Each time you load, you're thrown away very far back, so it's hugely inconvenient. 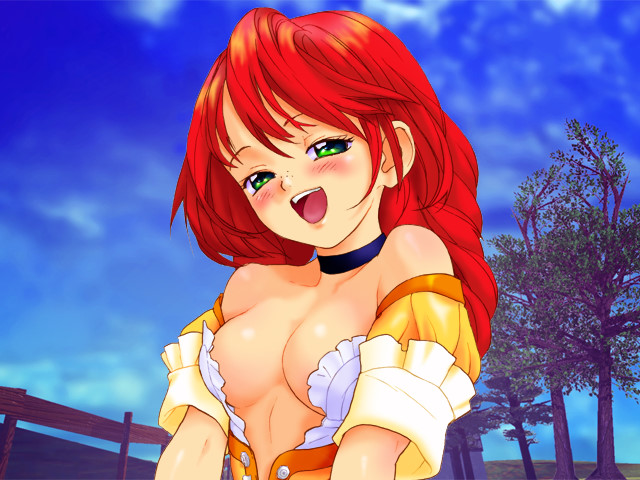 CG: Absolutely terrific CG. Just loving it with all my heart. So much detail. Sometimes the blend of 2D and 3D looks weird, but mostly it's in harmony. But the best part in the art is dresses of girls. These dresses show so much skin that they look like the prototypes for all the modern Korean mmorpgs. Truly hilarious and breathtaking.


Sound: BGM is decent, but not too memorable. 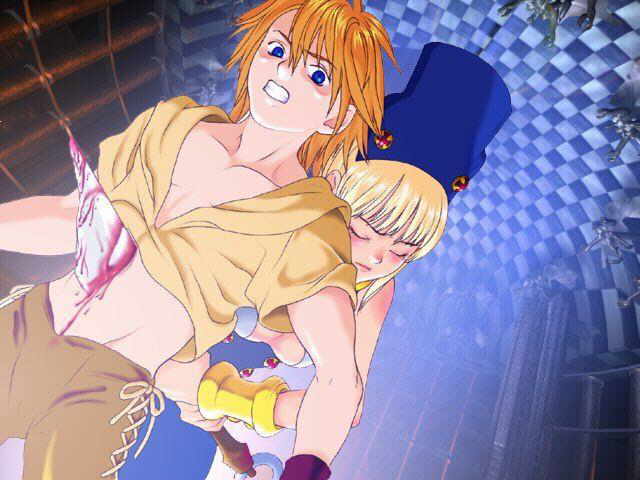 Title and Themes:  Game does not tell us much about carbon knights from the start apart of the fact that Fortita is one. But carbon knight theme gets a huge development in the last third of the game and finishes with the absolute domination of this theme, so it's a good choice.
Overall comments: So Carbon Knight has its flaws lying mostly in technical part, but they don't belittle its advantages. I consider it to be the first traditional fantasy chuunige and a huge masterpiece of the time. 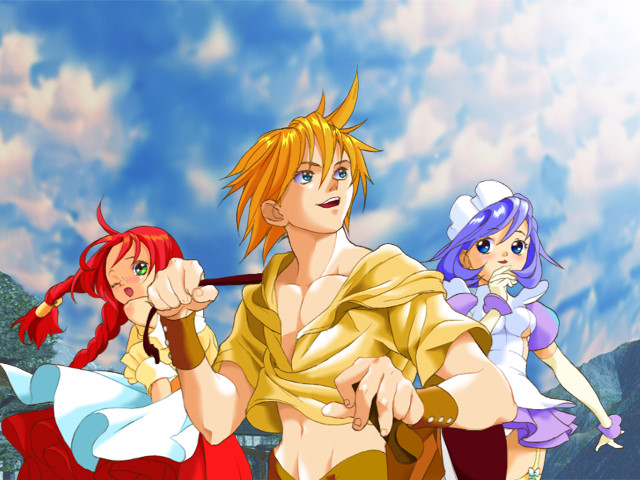