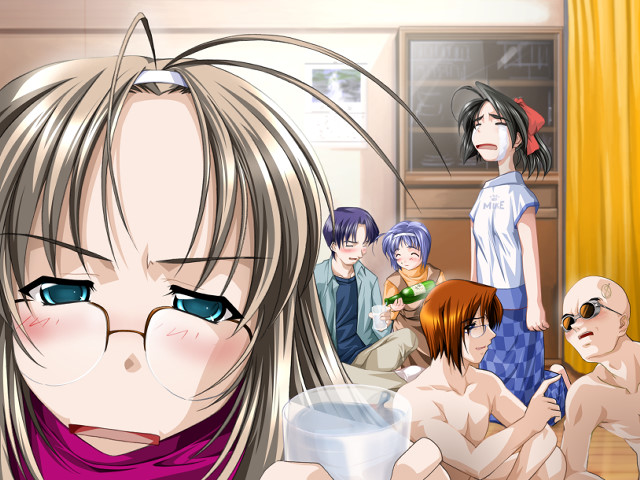 Synopsis: Shinichi Manabe attends Seiryo High School. His father is a writer. 5 years ago, Shinichi went to see a mysterious mirage with Mio Fukamachi and Tamako Fujiomi. Mio is one year older than Shinichi and acts like his mother, while Tamako loves old samurai movies and likes to hug.
The mirage really was mysterious, and they had a lot of fun. However, a week later, Mio tries to save a cat but ends up being killed. Shinichi hasn't seen a mirage since that fateful day.
One day, Tamako and Shinichi suddenly encounter another mirage. Shinichi pulls Tamako into the dense fog. Shinichi soon realizes that he is with Mio, not Tamako. He also realizes that instead of Mio, Tamako is dead. He asks himself, "Am I in a different world?" Looking for further clues, he flips through his album and finds many pictures he doesn't even recognize. He's now convinced that this isn't his world. 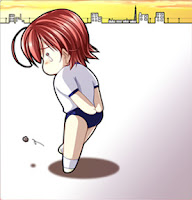 This game is very difficult to talk about, because nothing happens there. Synopsis really prepares us for a full-scale mystery drama, but game's totally different. Homerical gags take 4/5 of the game. They are so densely packed that you can start playing from any point in the game and have a lot of fun. Because of this overwhelming amount of humor there's not really much time for drama left. Only first Mio route has some time devoted to building up relations. The other routes have roughly a minute in the end to light up the mood. A nice example of game's humor is a scene of Mio's mother calling police to start searching for Mio. But because of her childish voice, police asks her several questions and considers it a childish prank cutting the call.

Humor is main actor of the game, so it deserves a close-up. The cover of the game already says much about it. There aren't character sprites in the game. The majority of time characters are presented by enclosed chibi drawings. Just as in Lien they allow to show a great variety of funny emotions and also depict actions just fine. Like heroine square approaching hero square little by little, and hero square moving the opposite direction little by litte, or these squares start to approach closer and closer, then - bam - some acquaintance comes in and face squares jump off to opposite corners. I totally love humor here, even at times when it concentrates on Mio teasing hero with adult talk about shame play and Tama teasing him with childish flashes of underwear etc. 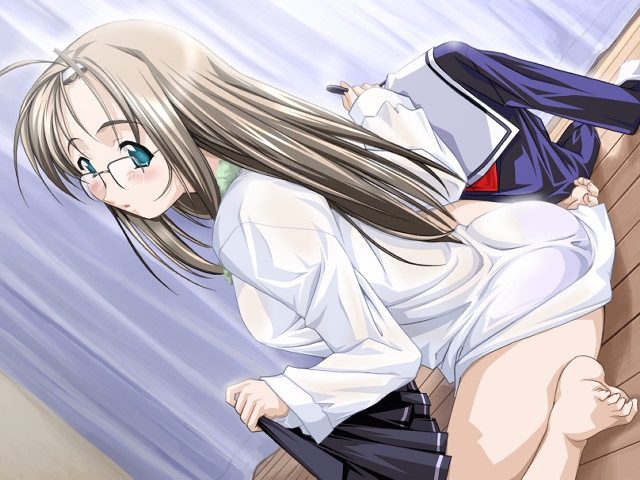 Since we touched characters already, let's introduce them. Shinichi is our main hero. Mio and Tama are his childhood friends with Mio being onee-san long hair type and Tama being genki imouto short-hair type. Other heroines don't really deserve a mention as full-fledged characters. Story often returns to characters of kindergarten age and uses chibi pictures resembling those super-young characters, so it's very difficult to treat main heroines as objects of love interest. Game is not about love. Yes, it has some branchings to satisfy this need, but only so forth.

Game engine inherits DoNoR model with its crude auto-reading. But even though backgrounds here are also rendered real photos, they look totally fine and natural here thanks to just decreasing number of colors creating water paint effect. No more eye pain because of blurry images! 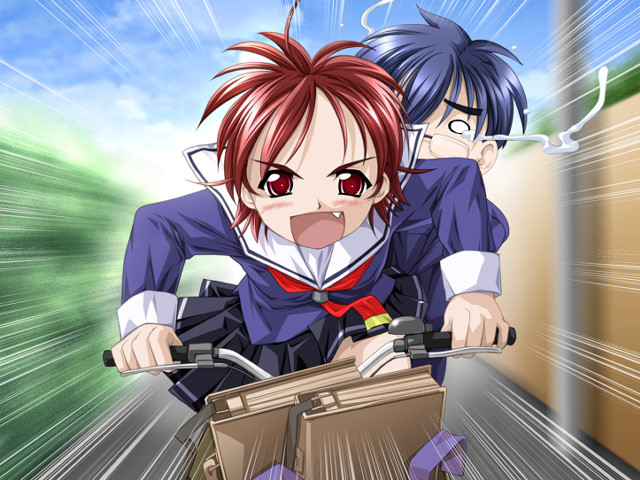 Game title is quite touching as it can be translated as "It's a miracle that we all are here". In fact it corresponds to the picture book that Shin started to write and that has nothing in it but this title.

What I mean to say by this hectic review is that this game is absolutely revolutionary in its lovely passiveness. There are no logical connections, no plot movements, no love drama, no conclusions. Game presents us lots of good moments with perfectly voiced heroines and ends on a high pitch note. It's free of all the stamps of the media. It's an enjoyable entertainment from beginning to end and great text to read. As if game tells us that we should be free of conventions enjoy at least this time we read this visual novel, because it's a miracle that we all are here. 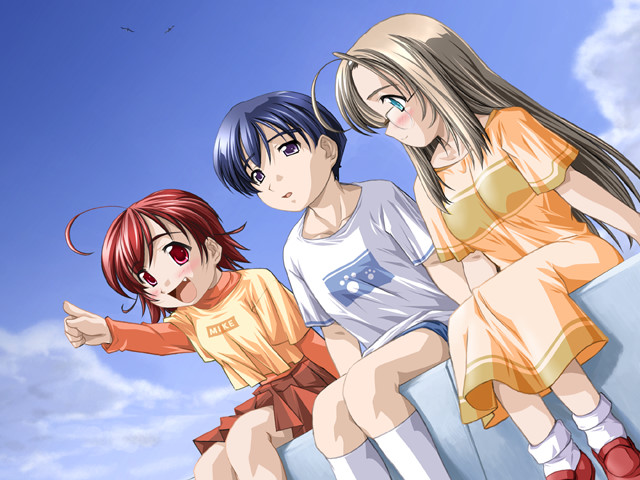 So, the whole VN is about comedy and slapstick humor, with some heartwarming drama in the middle?

It's definitely a great slapstick comedy. It does not have that much drama, though. This whole either Mio or Tamaki concept is overemphasized. Instead, it's a cheerful inspiring youth story about enjoying life and valuing it.