Foreword: I already chose another game for review in February... but in the end just could not ignore this huge pillar of today's visual novels. Without Kusarihime there would not be Saya no Uta, Cross Channel, Fate/stay night and Higurashi, so it's significance for the history can not be overerestimated.
Title: Kusarihime ~Euthanasia~
Developer: Liar-soft
Date: 2002-02-08
VNDB link: https://vndb.org/v37
Youtube walkthrough: https://www.youtube.com/watch?v=6J_joeqKri0&list=PLs4Gp5VU4Fv9h7u5e_7ePpWZ28i2PWbxd 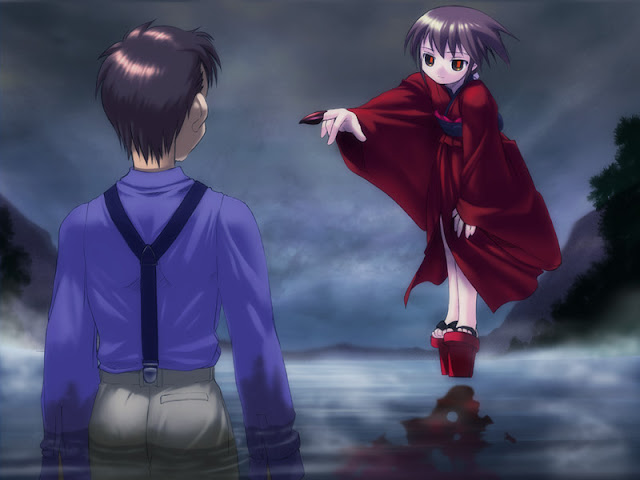 Synopsis: After the mysterious death of his father and his younger sister Juri, Itsuki, now suffering from amnesia, moves back to his hometown with his stepmother. There he meets an enigmatic young girl dressed in a crimson red kimono named Kurame, and the two soon become friends. The strange thing is, Kurame looks exactly like his younger sister Juri...
On the surface, Itsuki's family and friends all appear to be rooting for his full recovery. However, deep inside, they also seem to be burdened with secrets and guilt about the past. In the span of four days, Itsuki's memories will slowly return as he struggles between his loss and his fear of the truth, until the fourth night, when the whole world becomes blanketed under a red sheet of snow and wrapped up in the silence of death.... 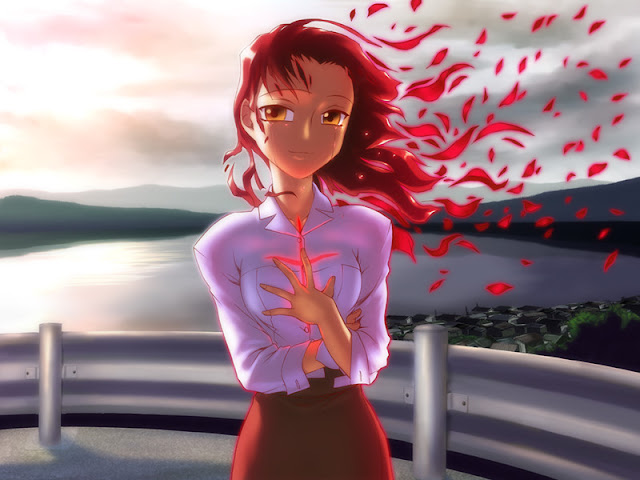 There are as many as 5 reviews, plus reddit impressions, plus very curious spoiler theory-crafting thread (1 2 3 4 5 6 7), so pretty much everything is said there already. So what I intend to is to tell you without spoilers what this visual novel is about and why you must read it. And it's very difficult to talk about Kusarihime without spoilers. Let me present an imaginary dialogue of my consciousness after reading Kusarihime trying to persuade my skeptical other self reluctant to try it. 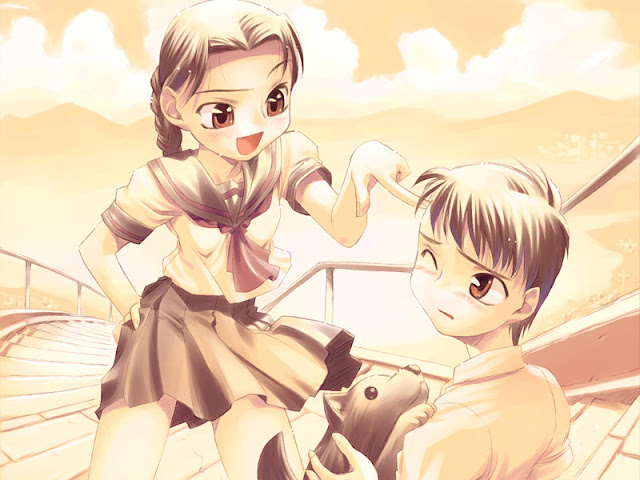 - So, first of all, Kusarihime is neither a horror nor a nakige. It's a rural story about a boy who looses memory and comes to his home town to try to regain his memories.
- How convenient! We've seen dozens of such stories by 2002 already! What's special in it this time?
- One thing is that game is looped over the same four August days
- That's not exactly a new thing. I remember at least three games with loops before 2002.
- But the second thing is that it's not a game about chasing girls. No heroine gets her separate end.
- That's weird. Is it some all ages game or something? What is there if there aren't heroine routes?
- Each heroine actually gets one of those 10 time loops to focus attention almost exclusively on her. That provides ample opportunities for presenting H scenes. 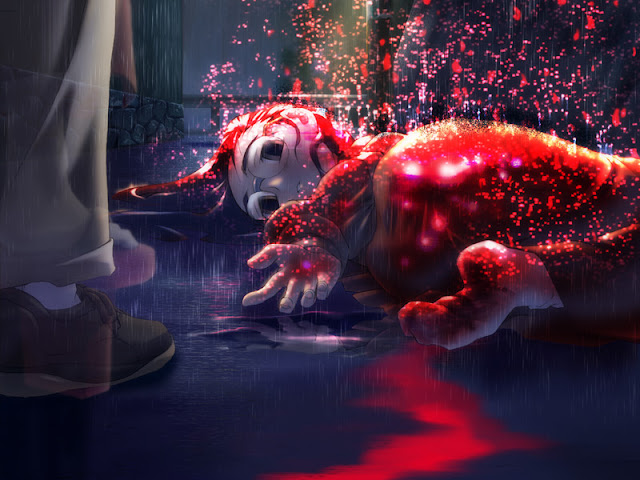 - So there ARE actually heroines routes, they are just hidden inside some of the loops. What makes it different from usual nukige or charage?
- Heroines here are not isolated inside their stories. They pierce all the loops, and each heroine story only helps to reveal the mystery behind the protagonist past.
- Oh, the "mystery". Something about the promise made 10 years ago?
- Absolutely not. First tier of mystery is about stray girl Kurame who looks just like protagonist's deceased sister Juri. Second tier of mystery is about protagonist's family overall - he had a father, a mother, a sister and a dog - all dead by now. The third tier of mystery is about the loop itself that ends with red snow falling, usually after some impactful violent events. 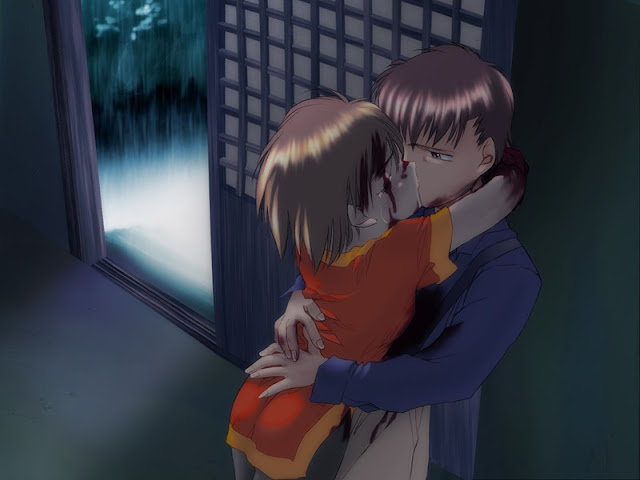 - Oh, so people die in here? Any guro as well?
- Thanks to loop concept it's possible to introduce any number of deaths here and then rewrite everything with another loop cycle. There is no guro.
- Pff, so even deaths happen not in the real world. Why should I bother reading 10 imaginary stories?
- Well, deaths actually affect same characters in next loops greatly. And count the characters - only half of the stories are loosely focused on some character. The rest of loops are focused on past or give hints to the listed mysteries.
- Oh, the "mysteries" again. Btw, what does this weird title Kusarihime ~Euthanasia~ mean?
- Kusarihime is translated as "rotting princess", it's the local legend about a girl in red kimono that causes certain people die. That girl's name is Kagame. And the stray girl that's found in the forest is given name Kagame by protagonist, but he can not explain why. As for "euthanasia", it's also a mystery. Here's dictionary definition: "Euthanasia is the termination of a very sick person's life in order to relieve them of their suffering". 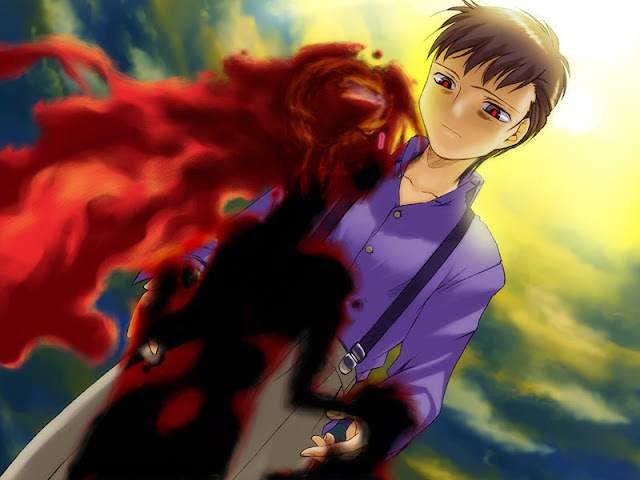 - I know what it means, thank you. So I get the concept of the game more or less. But what makes this game so special?
- Soundtrack, unique graphics style, great directing with lots of flashbacks and insertion of sudden scenes from other times, use of frequently moving figures on the screen instead of sprites, stunning stories of each girl, mystery plot loopholes as basis for replay-ability or theory-crafting.
- Ok, enough! Might give it a look if I find the time in my busy schedule. No promises, though.

Overall comments: I consider Kusarihime ~Euthanasia~ to be the first intellectual visual novel in history. It attracts not thanks to thrilling plot, great characters or superb visuals. It creates a multiple layer mystery where different parts move in their own pace cross-referencing each till sudden resolution. Reader is required to remember or re-read early scenes to fill some parts of the puzzle and make his own guess about the rest. In that way it can also be called the first interactive visual novel. 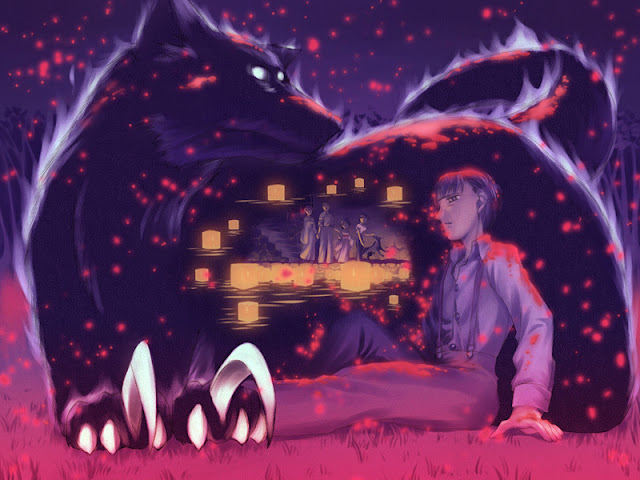 Everyone survives in the end, but girls lose feelings for main character after their disappearances in previous laps. Only Kurame stays. After hearing her sad story to the fullest we get a simple choice of what to do with all that information. The three endings of the game are the results of this choice. The true ending is forgiving Kurame and encouraging her to live together at the Earth. The other two endings are going to some other planet together and disappear together, correspondingly. Only last several minutes are really different in these endings.

Hope to hear from you soon.

Kurame destroys planets with her rotting. It's all vaguely described in the game, but there's a very good forum thread with lots of explanations and theories: https://vndb.org/t291

Itsuki is actually a being similar to Kurame, but with powers sleeping. Kurame sends him through time loops with amnesia each time. After each girl disappears (rots) in her route, in the next route she makes an appearance, but is kind of soul-less and passive for everything. If they talk, it's only everyday small talk, nothing big afterwards. It looks like girls are remade into humans from whatever entities they had been before.

In the true ending Itsuki rejects all the options of immortality and persuades Kurame to remake them as humans. His and Jiri kid versions are shown on the beach in the end.

In the end where planet is consumed it's said that their mutual rotting consumes planets over and over and they need to jump to different planets each time. Such price they pay for the immortality.

I see, so in the true ending, Itsuki rejects all the options of immortality and convinces Kurame to remake themselves as humans? The kid versions of themselves are shown at the beach in the end? Wait, what about the other girls who were rotted? Did Kurame remade them back to their normal selves? What will they say when they see Itsuki and Kurame as kids again? Hope to hear from you soon.

Kids on the beach is a short closing scene, so there is no time to really introduce other characters. Also, it's actually Itsuki and lost younger sister Jiri that looks almost exactly like Kurame who play on the beach as kids. It's an open scene for theory-crafting. It may be that Kurame actually disappeared from the world or that Kurame actually embodies Jiri body. Game does not give conclusive answers, but there's a feeling that characters start their life from scratch, and this time all the horrible mistakes made by all the characters will probably be avoided.

Huh, that's true. It's likely that Itsuki and Kurame/Juri are starting their lives from scratch, hence why they're kids again. Strange, yet bizarre.

Anyway, we don't really know what happened to the other girls in the true ending then, after Itsuki and Kurame remake thenselves as human kids? Are they back to normal, are they not shallow versions of themselves?

Nope, game definitely does not tell anything about the rest of the girls after showing those two children. But I'd like to notice that Natuski and Yoshino deserved rotting, so rebirth is a revelation for them. I did not exactly understand what was Ise's sin, though. Jun never got rotten by Kagame, because Jun retained a pure nature to the end. Game is based on the number of loops, so ending with the loop at a very early stage is a good enough ending for me.

Game is based on the number of loops, huh? Ending with the loop at a very early stage is a good enough ending? What is this particular ending though, if I may ask?

Sucks that we don't hear anything about the other girls after we see the child Itsuki and child Kagame, after the two become human. At least Jun is pure and never rotted, that's a relief.

I wonder about Natsuki and Yoshino, are they that two-faced? Hope to hear from you soon.

I see children lying on the beach in the last minutes of the game as the loop that takes start at the very early point, that's why a loop game ends in another loop.

Natsuki and Yoshino routes are full of sex scenes both in younger age and contemporary age. They seduce Itsuki in their routes, and that's already a good enough reason for Kurame to rot them. Don't think they killed someone or something like that.