Foreword: With Fuwa and vndbreview votes combined One 2 ~Eien no Yakusoku~ got 5 poll votes which is two votes more than closest competitor Masaru: Ashita no Yukinojou 2 has. I already mentioned that One 2 is a masterpiece, so it's time to present my reasoning. As usual, I only picked two heroines to capture while remaining four remain untouched (except for common route cameo).
Title: One 2 ~Eien no Yakusoku~
Developer: BaseSon
Date: 2002-04-26
VNDB link: https://vndb.org/v670
Youtube walkthrough: https://www.youtube.com/watch?v=tJfpbHU6BJI&list=PLs4Gp5VU4Fv9Hia_EVrgITFqPHmCZQNO1 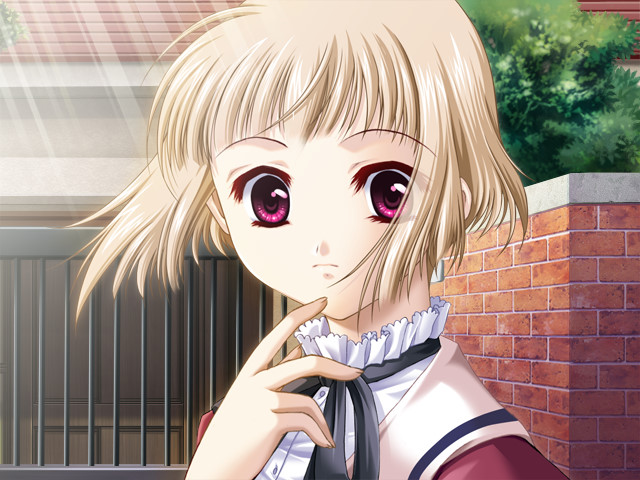 Synopsis: I was away from home during the summer vacation, when I returned I found out that my father has moved away. No one in the school knew my name, not even my classmates. I started my new life like that.
I never expected those things, to miss the everyday life, going to school... and to love... 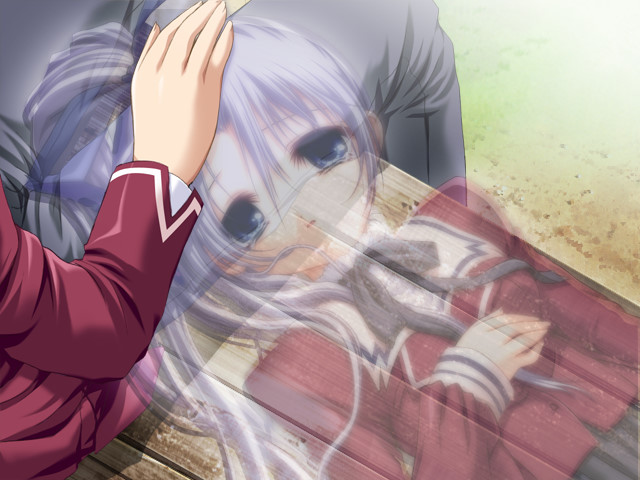 Rating comments: Voice version is decent in every field

Protagonist: Kazuhiro gives away an aura of a reliable man in both routes that I played. With Ayame he's able to kindly disperse her antisocial attitude. With Haruka teacher he communicates as an equal from the very start, so their love story looks very natural. 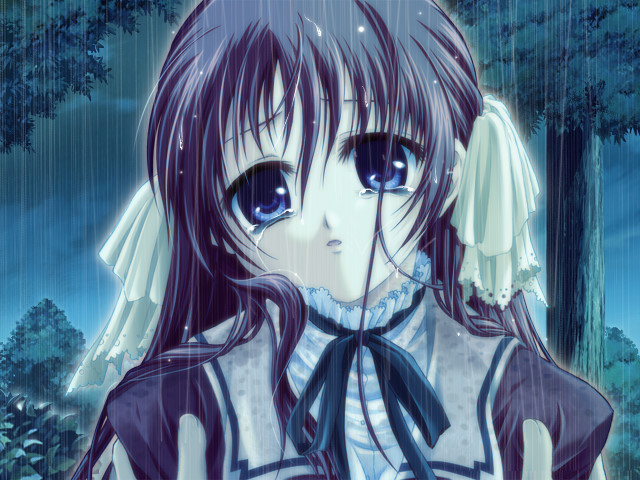 Characters: There are five heroines in the original One2 game, but in voice version popular heroine was added to the cast. I played only two routes with most interesting personalities. Heroines with "Naive" personality are no good for me, and the rest of heroines are exactly like that.
Ayame is our short white hair mysterious anti-social beauty. She actually gets as many CG as presumable main heroine Nao, so I consider Ayame main heroine as well. Ayame is a great heroine, because she has such a difficult personality. She does not talk to strangers at all at start, then she just throws short cold phrases. The very first time Kazuhiro tags along her, she invites him to enter girl toilet, something that he does not dare to do. But as story goes on, she actually turns out to be friendly. She has a perfect reason to treat the rest of the world like that. Ayame had a kind and gentle twin-sister who spent a lot of time in the hospital. We get to see long flashback talks with sister talking to Kazuhiro which creates good mood. Then we get to know that sister ... just disappeared before Ayame one day, and everyone forgot about her. The only two persons who have recollections of sister are Ayame and Kazuhiro. This is the ground Ayame and Kazuhiro start to get closer. Ayame has a serious attitude most of the time, but she can also be emotional and somewhat even tsudere-ish, and her soft quiet "Baka" is just great.
Haruka is the teacher and the only grown-up heroine in the game. It would be pretty impossible to approach a normal formal teacher, but Haruka is no way like that. She loves talking to Kazuhiro about spies and laughs all the time. After Ayame route with zero humor in it, Haruka route looks very refreshing and funny. Her story of prodigy piano player is less impact-full than Ayame one, but decent enough. 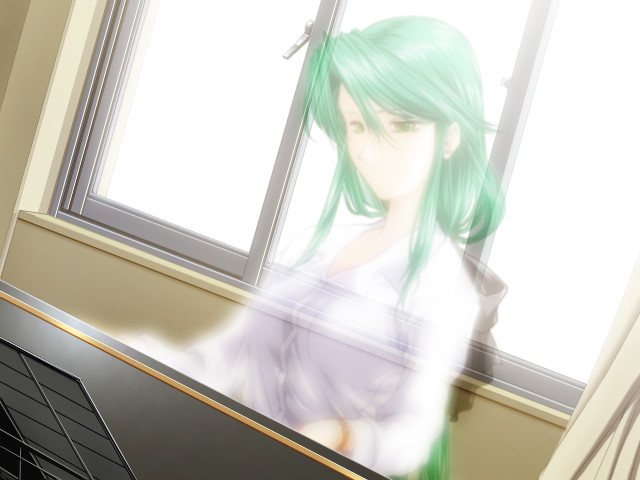 Story: All six routes are united by the disappearing eternal world concept and the same school, but routes are written by two different writers and are very different. The absence of one formal main heroine puts an emphasis on diversity, and the eternal world concept is cleverly used to emphasize encounters, farewells, frustrations, forgetting and remembering. In original One it was the protagonist to travel to the eternal world and disappear, but here it's actually heroines that do that, so every heroine needs her special story and reason.

Overall comments: It's a strange nakige for it does not have gags or really impact-full heroines. Story is also bound to make ties to the eternal world concept, so it may look weird how so many heroines reached this point. But what game shines about is telling sincere beautiful memorable stories. Game has serious heroines, so even such nakige-hater as myself could enjoy it substantially. 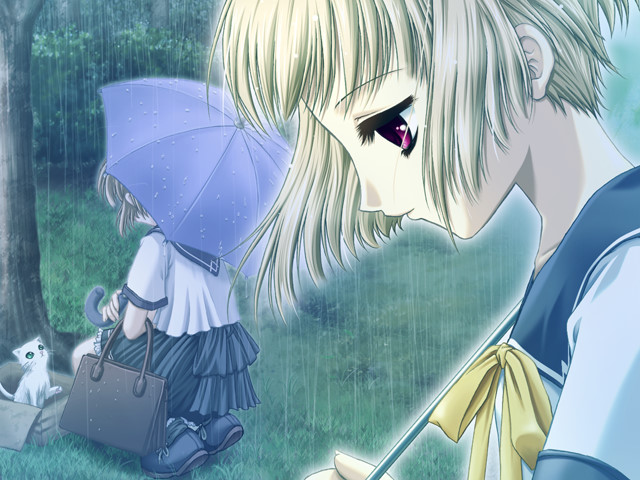 I've been following you for some time now, but I also got several questions. From where did you acquire VNs for reviews? Downloading from certain sites, or just flat purchasing them online?
On a side note, what's your first language? Or was it English, but rather a different dialect? (I'm only acquainted with American English, like most of the world do.)
Thanks anyway.

Well, no comments for both questions. But can answer if contact form is filled.
Can only say that I do not support piracy and my first language is not English (I do not reread what I write, and that causes the bulk of awkward moments).

So, for the two routes that you only read through (Ayame and Haruka), what happens in each of them, if you can still remember the details? Haruka in her route was disappearing to the Eternal World from the CGs I saw. Does she return to the real world and reunite with the protagonist? Was it her strong bond with him that helped her? Ayame didn't disappear to the Eternal World, right, only her sister? I hope to hear from you soon.

Everyone forgets about Haruka, but Kazuhiro wants to remember, so he practices their song on the piano, which makes Haruka regain existence.
Ayame actually also disappears suddenly in the middle of dialogue. But Kazuhiro takes the key to their special place - roof - and finds her there.
But still memory and remembrance is a bigger theme than disappearance in this game.

I see, so both Haruka and Ayame do disappear where everyone, except Kazuhiro, forgets about them in their own routes. Of course, Kazuhiro wants to remember and reunite with them, so he does things that makes them regain their existence (Haruka by playing their song on the piano and Ayame by taking the key to their special place and finding her there). In the end, Kazuhiro was able to reunite with Haruka and Ayame in the real world (once the two girls regained their existence) at the end of their individual routes, correct?

That's nice. So, those two (Haruka and Ayame) are the only two heroines you did routes for? Hope to hear from you soon.

Yes, game is about getting to know each girl and reuniting them after overcoming drama, so the end is good. Only played Haruka and Ayame routes since I'm not a fan of pure charage/nakige.

I see, that makes sense. All the endings are good, happy endings with Kazuhiro reuniting with each heroine in their routes after overcoming the drama. That's a relief, and the game focuses more on the problems and drama than the disappearing part, I believe. I think that was that? Yeah, I think that's it. Hope to hear from you soon.