Foreword: It's requested as extra review, so I'm pleased to tell what kind of masterpiece this game is. It does not mean I'm not reviewing Abandoner, though. Both games stood so close in the poll that I could not make my mind in any way.
VNDB: https://vndb.org/v1085
Youtube: https://www.youtube.com/watch?v=pDJG1UQavYg&list=PLs4Gp5VU4Fv-73f48qzUpNIceFnIA8Mot 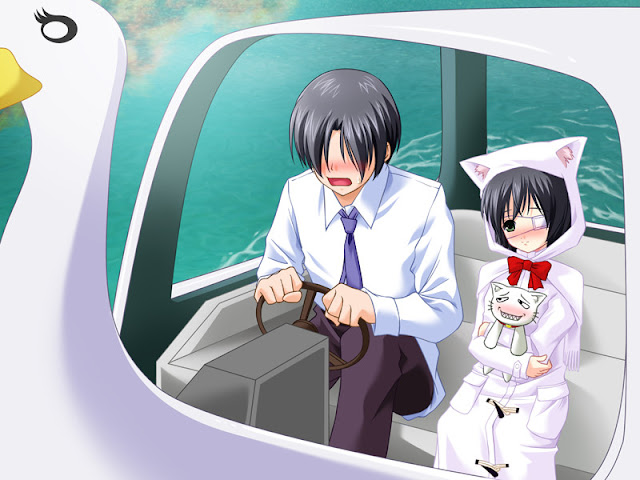 Synopsis: The game revolves around the main character's 3 days repeating over and over again, where he is constantly being killed in the third day of the story (in various ways) but magically being brought back to life in the first day to repeat his 3 days. Your goal here is to solve the mystery behind the death of your sempai and also to find the identity of the murderer. 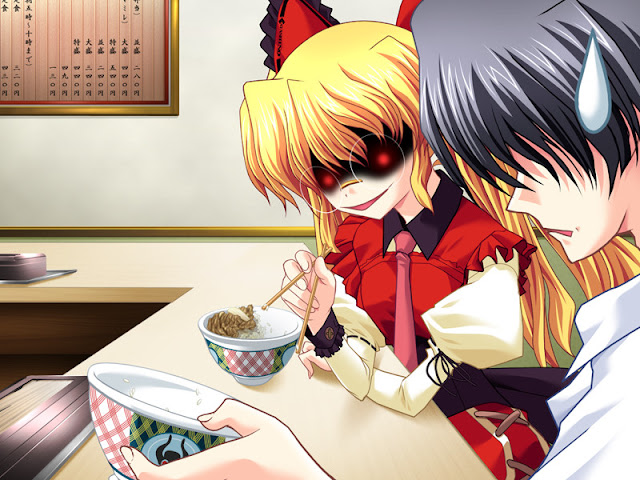 I only found one impression (1), and it's not very elaborate, so let's dissect things properly. 3days is a classic loop game, but for me it's the same kind of classic as To Heart for galge - boring and exhausting. The same loop of three days goes on for some 15 laps (maybe less if some alternative branches are skipped) and finishes with more and more elaborate ways of killing and sometimes raping. But the worst thing for me is that specific scene needs to be triggered in all of three heroine initial roues. I had to do much more loops, because I triggered only one Tamaki H scene while I needed to find another one for her item to show at the main screen indicating her route fully done. 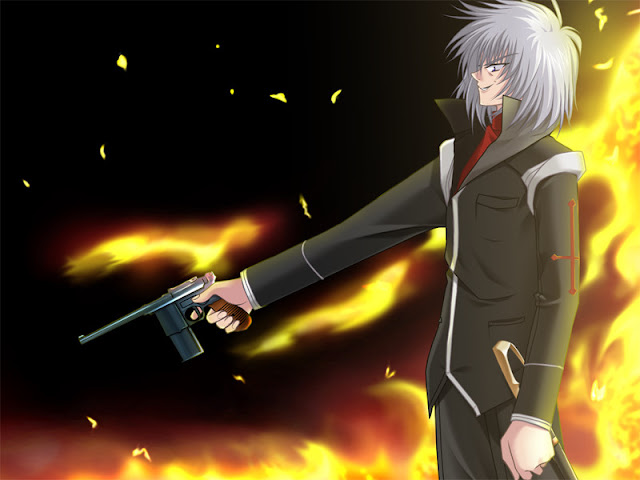 That being said, first half of 3days is of little interest to me. Watching the same events over and over and girls die over and over in different situations is not really what constitutes for fun pastime. However, the second part actually manages to present a favorable impression by cleverly mixing past, present and future Ryou stories. We get acquainted with the new charming heroine Miyu who has to bear all the positive intentions of the game alone just because she's the only heroine that we don't see dying miserably with torn apart body and face distorted with fear. Magic finally comes to the stage, and game turns into a fantasy battle from a pesky contemporary murder story.

But I don't suffer from short memory, so horrible first part gets a huge evaluation penalty from me. There are also other negative factors. Basically, game is a royal story. That goes for both first and second part. The individual heroine endings take really like a few minutes astray from the main story. Another negative factor is poor CG representation and occasional lack of voicing. I can remember very few CG after playthrough, so it's constant character sprites hell. Also, I can't really stand Harry Potter, so second part is rather repulsive with all the magic domination and stuff. At the same time Tsukiko as the best starting heroine never receives her route in the main game and plays mostly a comical role. There are too many deficiencies to neglect in the overall evaluation. 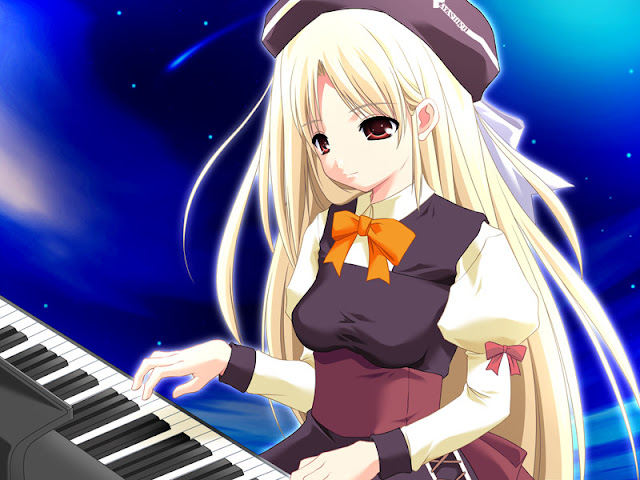 In the raw outcome, 3days is a masterpiece, but only thanks to the main concept and true route in the second part. It occupies a firm position among classics as one of grandfathers of loop visual novels. Tsukiko and later Miyu don't let the game to turn into total despair. But as to my recommendations... I'm not so sure. Game fails as a detective story and suffers a lot whenever it tries to advance romance. Would I really play this game if I knew that it'd total to magic battle? I'm pretty sure that I would not, although such turn of events was really unexpected. Game really feels old and lacking production quality. It's still a good game at the core, but who would want to get to the core when there are so many better quality stories nowadays. 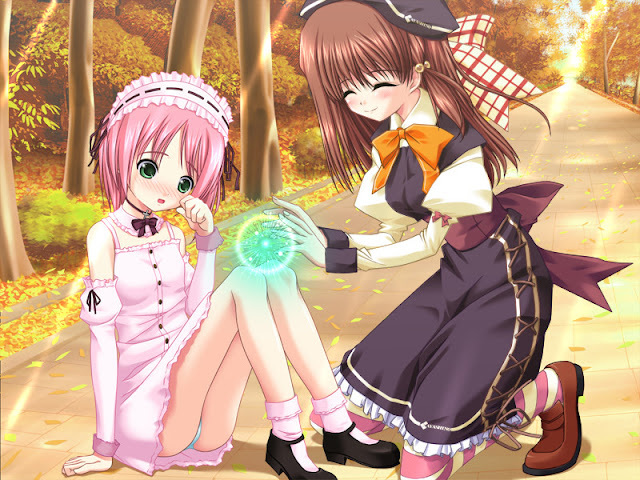 I want to ask, what happens in the True Route? None of the heroines are dead, correct? What about Tamaki and Miyu (the red-eyed, blonde girl)? Are they alive? Hope to hear from you soon.

Everyone is alive in the True End. In the final choice we first choose whether to comfort Miyu or not and then we choose the girl to rely on in the final battle. Those two choices determine which girl True End to follow. If we both comfort Miyu and choose all the girls, then we get a harem End.

Hello there, in 3days - Common Route, the video stop in "I don´t know Tamaki".

Hmm... not sure where's the problem. Common Route video ends with the beginning of a new loop for me. At which minute is the problem?

Oh, that you a lot for pointing out. It's actually the second time my video editor let me down in such way when rendering video to HD with first one being Sophia True Route End in Paradise Lost. There were also moments when videos became blurry for couple seconds. There is nothing I can do to recover 3days video since originals are deleted already. But I'll switch to another video editor asap to prevent such disasters... almost two hours of video wasted...

I see. How many girl True Endings are there, including the Harem True Ending? Also, in Tamaki True Ending, Miyu was crying at the end. For Miyu True Ending, Tamaki is calling someone on the phone. What are these about?

So, you can't recover the 3days video since the originals are deleted? This is the same as with Paradise Lost? Hope to hear from you soon.

I covered all the possible True Ends - Miyu, Tamaki, Rika, Harem, so there are four. In the Tamaki True Ending Ryo forgets about Miyu completely. He bumps at her while walking with Tamaki, and has zero recollection of this person. Miyu is really sad about this situation as she can't imagine life without Ryo.

In Miyu True End things are reversed. Both Narumi and Tamaki forget about Ryo. Tamaki is calling her school friend Tsukiko. So there is always someone sad unless it's Harem End.

Raw videos before upload take about 10 Gb each, and I'm very limited with free space, sitting at some 100 Gb free space for my needs. I delete originals within a few days. So far I have not been able to find a really suitable other rendering program for my needs, so will continue to use old one, just newer version of it.

So, everyone is truly happy in the Harem True Ending, right? Ryo doesn't forget Miyu, Tamaki and Narumi don't forget about Ryo, everything is good.

What about Rika True End? Also, for Miyu True End, Miyu is the only one who remembers Ryo? Hope to hear from you soon.

Rika True End is actually alike. They encounter Tamaki and Tsukihiko and don't recognize each other.

As for Miyu True End, we're not shown other girls. The whole scene after world rebirth is very short. But from the context I can suppose that only the girl of the True End actually remembers Ryo.

Only the Harem End is really unconditionally happy one. It's also the longest one since individual ends take just 5 minutes tops after the world rebirth. But Harem True End takes over 25 minutes after world rebirth.

"They" in Rika True End? Are you referring to Ryo and Rika when they encountered Tamaki and Tsukihiro and don't recognize each other?

So, they destroyed the time loop in the True Ends, considering Ryo, with help from the girls, was able to kill Walter for good?

So, in Tamaki, Miyu, and Rika True Ends, everyone (except Walter) is alive, but some of them forget about each other completely? They're also quite short as well. Of course, only the girl of the True End, as well as Miyu, remembers Ryo.

Wow, so we can say that the Harem End is the actual True End, considering it's unconditionally happy? Not only that, it's also the longest one since Tamaki, Miyu, and Rika's individual ends take just 5 minutes (very short) tops after the world rebirth. It is over 25 minutes after the world rebirth. Walter is dead for good, Ryo and the girls are alive and remember one another, and they are living happy lives, especially with the girls saying that they love Ryo right in front of each other's faces, with poor Ryo along for the ride.

Hope to hear from you soon.

Out of pure irony bloody horror ends with an absolutely happy harem end with everyone but antagonist alive.