Foreword: Liar-soft games are always absurd and somewhat fun, but of varying quality. Seven-Bridge actually has the same scenario writer as Kusarihime ~Euthanasia~ (at least one of the three authors) , so I see all the reasons to give it a bite.
VNDB: https://vndb.org/v597
Youtube: https://www.youtube.com/watch?v=rdLAzm2uTvw&list=PLs4Gp5VU4Fv8rKP5oDa1nzt0KevjFrmhw&index=30&t=0s

Synopsis: In a parallel world, the history takes a different turn at the start of the 20th Century. Black death plague ravages the European Countries, death toll is so high that when the Ottoman Empire strikes from the east they are powerless to resist. In the name of Jihad, Europe burns.
Kuu Klein is the only survivor of black death in his village in Germany and he flees all the way to Beijing to survive the war and the plague. He has the ability to read minds but it brings him only more suffering.
Ten years later, when the World War starts chaos and poverty spreads to Beijing. He decides to go back to his hometown, better to be at home if the war will be everywhere... But there are no trains to Europe except the rumored "Black Train Joan". He tries to get on that train but the only people with the "Black Ticket" are allowed to board.
Unable to find a way to get abroad he gives himself to alcohol, later that day on the street he meets a girl who offers him a black ticket. Somehow he can't read the thoughts of this particular girl. She can't speak a word either, an another strange thing about her is that she covers her hands with long dark gloves, never taking them off for any reason...
After some difficulty in conversation, he learns that her name is Emma and she would give him a ticket if he agrees to travel to Europe as her companion. They board the train together and take of on a journey that will take them over seven bridges and many ordeals... 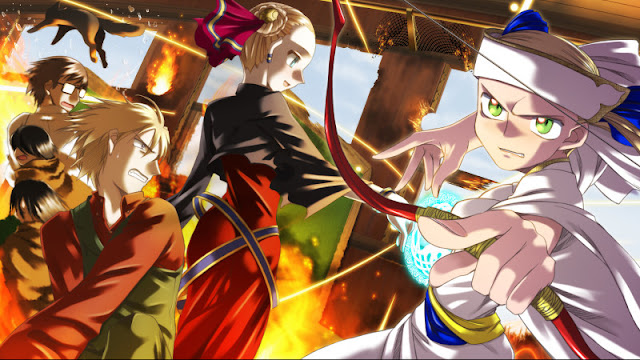 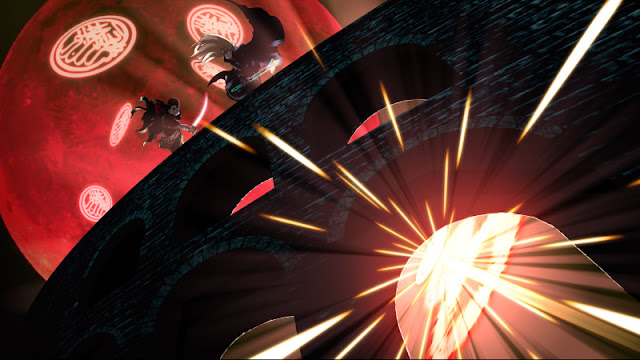 First of all, I was really surprised by the length of the game. Half of the same day I was recording second half of Steel's epilogue, but the whole playthrough of Seven-Bridge fit into the remaining half of the day. Game has only one route and only one ending. 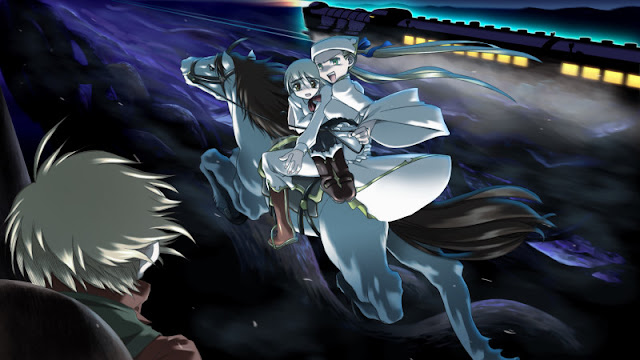 I call genre a road movie story, because we never get far from the black train. Sometimes it runs at full speed of 800 miles an hour and sometimes makes stops, but it always remains at the core of the game. The story begins in a normal manner, but very soon strange legends of golems and flying trains show up, and it would not be Liar Soft if things weren't turning mad very soon. There has been a big number of space expresses in Japanese anime (Galaxy Express 999), literature (Night on the Galactic Railroad) and even in visual novel genre (D ~Sono Keshiki no Mukougawa~), so it's a safe bet where it's also possible to insert multiple references to previous media. I believe genre can also be called a parody for the vast number of different genre parodies involved. Maybe it's the result of three different scenario writers working together. 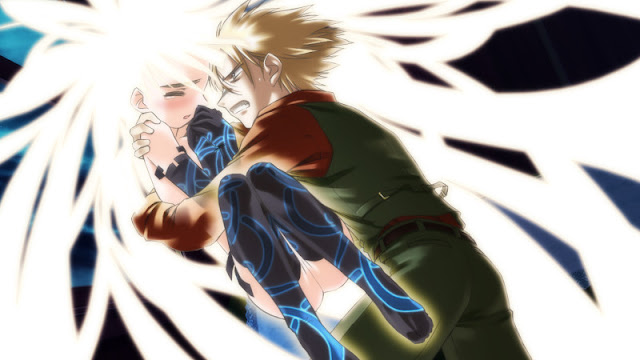 What surprised me even more than the length is the abyssmal number of H events in the game. They begin pretty much spontaneously and get the same craziness momentum as the absurd scenario. What I appreciate is that these scenes aren't always isolated from the other world. By the end of the game they involve more and more characters and - ehm - spectators. They give out a lively integrated with the story feeling. 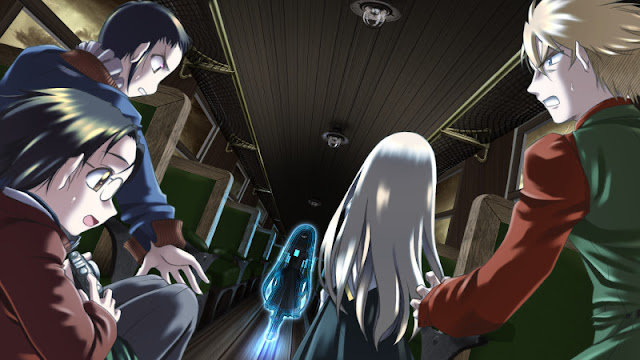 World view is eccentric, and story becomes ridiculous as well. Basically, protagonist from german origin ends up on a black train where Christians go from China to Europe to start a war with Muslims there. Game is divided into three chapters. First one is pretty normal travel from China to Siberia across lifeless landscapes. But captain of the train spontaneously decides to take a day off, so protagonist somehow finds himself in the machine room trying to drive. Only he can see button of various colors, and those colors actually have supernatural powers. The marks the first supernatural event. The second chapter is about getting away from Novonikolaevsk in Siberia towards Tashkent in order to get to Samara from there. The reason is supposedly Bolshevist attacks. Characters hope that Muslims are peaceful during Ramadan, but they get a good share of adventures in the prairies and Istanbul. The third chapter is about arriving to Prague and is something absolutely different with sanity vanishing without a trace. 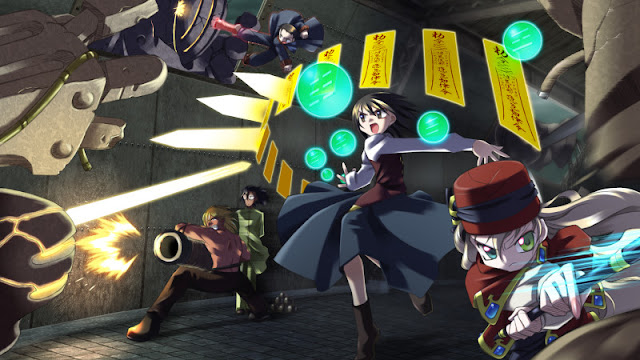 Humor is quite to my liking. It's either situational or absurd. For example, it's nice to see how conductor Joel tries to speak broken English in extreme situations and then asks everyone around whether she said something bad. Same as in Sapphism no Gensou every character presents a different country, so their interaction is amusing to read. 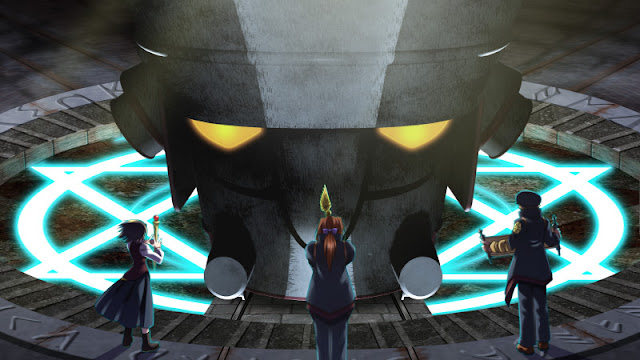 Overall, I was not expecting much from this game, but it proved to be an enjoyable ride. It's definitely not a place to seek a serious story. It lacks integrity and finishes as soon as Emma's story is finished. But Liar-Soft charm is seen in many parts of the game, so company fans should not miss it. 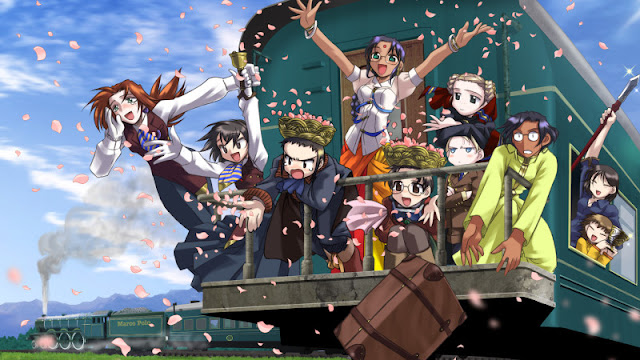 Are you going to read Saihate no Ima?

Oh, my...
On one hand, there are five full reviews of it in my database, and there even more shorter impressions.
It's also going to be a painful manual read since you really need to click on all the links.
But, on the other hand, the reviews are pretty vague and I'm weak to a good mind screw.
Yep, I'm definitely reviewing it, but will try to stick with PSP version content in order not to cut any scenes.

So, the humor is the main point of this VN?

Humor, huh? I can't even say that Liar-Soft is about humor. It's about absurd. Game throws in more and more absurd characters and events, and they keep surprising you. Then it all ends, and you wonder what kind of stupid game you've just played. Liar-Soft games either infuse you with enthusiasm, and you can enjoy any its game, or they irritate you, and in that case Kusarihime should be the only work of Liar-Soft to read.