Foreword: I never expected a 80 hour long race out of this "episodic" story. How much time should pass till opening? What about length of the epilogue? Should there be some lines after the final credits? Believe me, Steel will surprise you with each answer. I knew that scenario from Kadokura Keisuke would be enjoyable. But it took me a full week to be able to digest it.
VNDB: https://vndb.org/v6416
Youtube: https://www.youtube.com/watch?v=N5Nc368AlSs&list=PLs4Gp5VU4Fv9jHMWwIIkzFPiTpLJ-eMP7 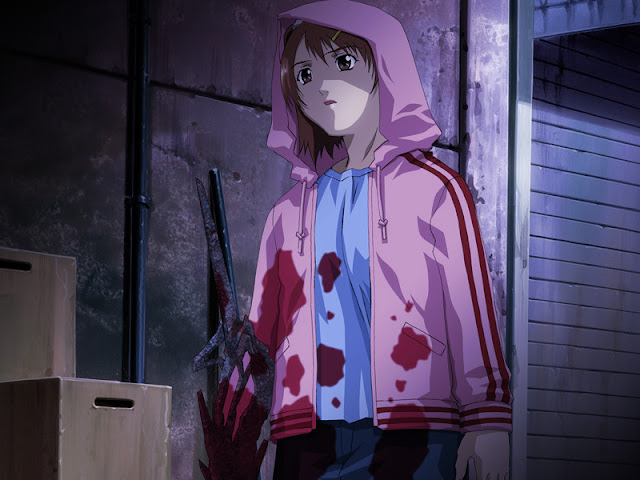 Synopsis: The protagonist, Tomoya, was abandoned by his mother at a tender age. He was taken in by Honjou Arisa after a chance meeting. Four girl adoptees who had joined the Honjou family home for similar reasons also lived there.
Though they were not related by blood, Tomoya treated the girls as if they were his siblings. They lived peaceful lives at the Honjou residence... but one day, he encountered a strange woman in town. She was wreathed in something that looked like iron – and upon seeing her figure, he remembered that he, too, had once harbored such a metallic augment.
"Is that... your Anima?"
A right arm turned to metal... A peculiar corpse discovered at school... A transfer student exuding dark mist... And a foreign warrior wreathed in thick steel armor... Tomoya's peaceful life would soon begin to crumble as disaster came to visit him and his sisters. To protect them, he shall have to once again wreathe his right arm in Anima. 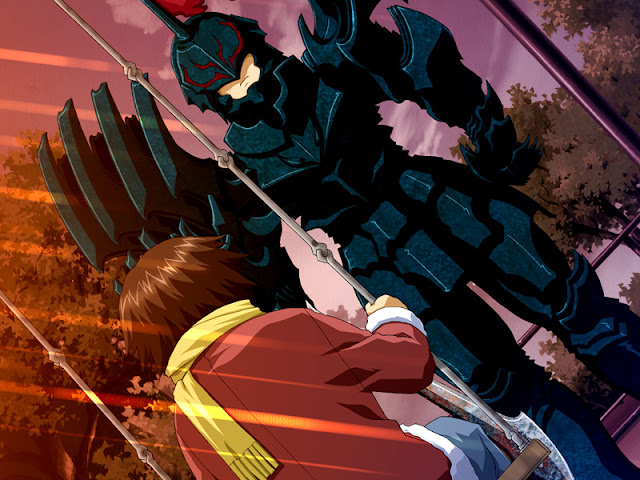 Basics first. This is a story of a big and powerful Honjo clan. Main character Tomoya is an adopted child who lives in the family for the last five years. Only few families possess the anima ability to turn their body into weapons. They have rivals, but don't show their powers to the outsiders. Tomoya only starts to master his anima. That brings us to structure.

There are four chapters. Three first chapters have similar shape. Each of them is devoted to Honjo sisters and their anima - first Misaki, then Ayano, finally Iori. These three chapters have two endings each - initially the true one when the heroine comes off the stage in some way and then the side happy ending with each heroine. After each of four chapters there's a short explanatory chapter which is devoted mostly to past events and Honjo Alice heroine. The fourth chapter has only one ending and is devoted to the most mysterious heroine Nishinomiya Akizuki. It also covers most of the loose ends of the game. Epilogue chapter (with a small Final chapter which finalizes Explanatory Chapters) is very different from the other chapters and presents after-story for the different characters that remain on the stage up to the point. 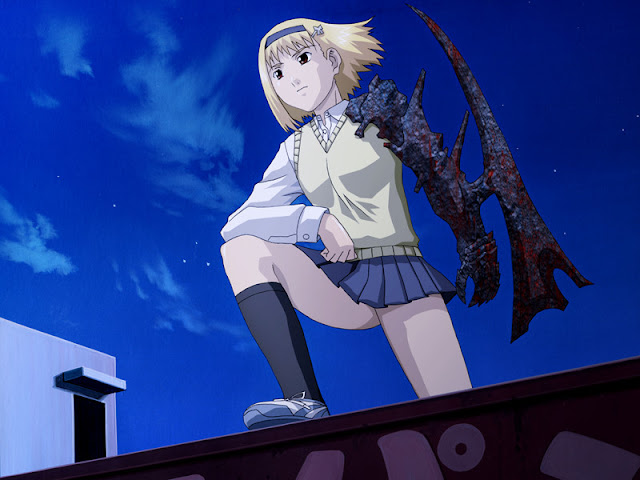 Phew, with that covered - almost - without spoilers it's possible to go on. Story is thrilling, and text is really rich. Characters are quite developed despite having no voicing thanks to whole 15-hour long chapter devoted to each of them. What I liked the most is that there are very few SOL scenes. Protagonist Tomoya starts off pretty well with all his powers awakening gradually and evolving with more emotional experiences. But game really lacks a good conflict. There are some goons (including elite ones) from the rival family, but that's it. So in result Tomoya just does not have opportunity to actually fight since we constantly need to show battle prowess of our chapter heroines. Thus he gets from cool to passive losing charm. Due to the lack of conflict some fights happen even between heroines out of trifles. But on the other hand, some antagonists jump to the stage out of the blue. Momentum never gets lost. 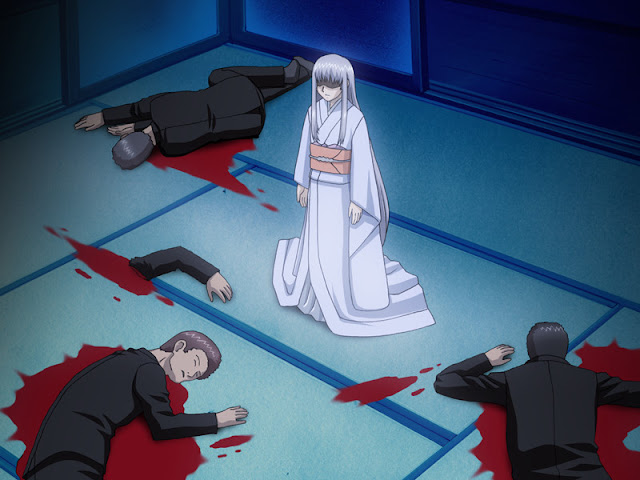 Time to get back to story since it's the main flavor of the game. Each chapter is actually very different, so we can't stop being surprised. Misaki chapter is our straightforward nakige with personal drama and focus on the heroine alone. Ayano chapter suddenly changes focus from heroine to her anima. Iori chapter is totally different again since Iori actually can't fight. Maid Noriko has to fulfill that function, so Noriko actually gets her own ending as well. Third chapter also marks the main conflict of the game and uncovers Honjo clan secrets. Fourth chapter has the most straightforward conflict between main heroines Alice and Akizuki against their own antagonists. As for epilogue, it gives off too much of Clannad scent which is a great minus for such Clannad hater as me. Each chapter is named after anima name and explanatory chapters are called Shizoid because of the very different perspective presented. 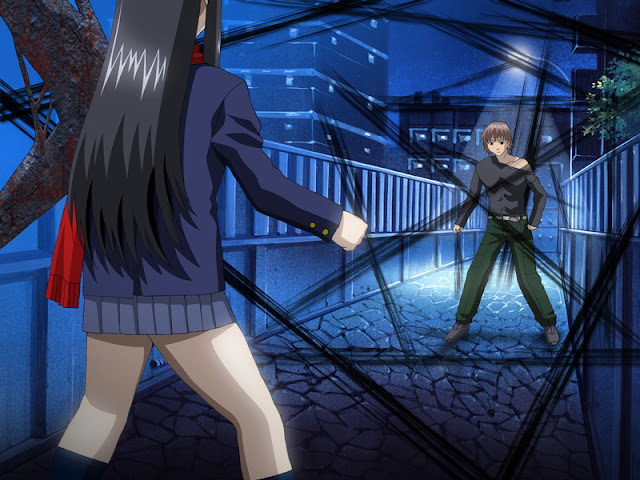 The saddest part is graphical presentation and absence of voicing. That gives a huge penalty to the quality evaluation. I can't really imagine many persons to be able to read such a huge story with such poor presentation. But - on the other hand - how many real modern masterpieces are there without voicing? Can't really remember even one out of the blue. That's an enourmous feat by itself. 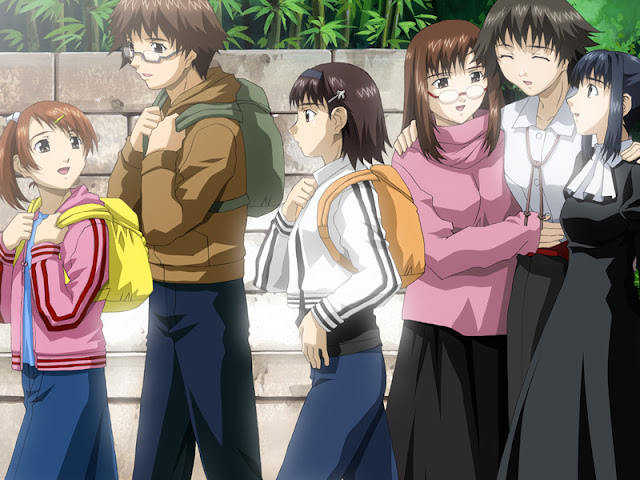